In order to sustain the argument that the government needs to establish a state-owned bank, it is necessary to develop a bogus argument about the ‘oligopolistic’ nature of the SA banking sector. (Image: Adobestock)

The ANC’s most recent economic treatise says SA’s banking system ‘can be characterised as oligopolistic’. In the grander scheme of things, this seems like a passing, politicised piece of agitprop, not dissimilar to the ANC’s economic policy pronouncements over the years. But in fact, it goes to the heart of SA’s economic malaise, both in the Covid-19 era and beyond it.

The ANC’s latest economic document, Reconstruction, Growth And Transformation: Building A New, Inclusive Economy, styled as a discussion document prepared by the party’s Economic Transformation Committee to address economic aspects of the Covid-19 crisis, has received plaudits and criticism in a fashion that so many of its previous economic epistles have in the past.

Some unions claim it doesn’t go far enough. Business politely demures and puts forward its own plan. And so we go round and round the mulberry bush again, with all players playing their familiar roles, even as they largely talk past each other.

The most positive construction on two plans is that, at least, they both focus on the need for new infrastructure spending. But the hard truth is that South Africans have reached peak-plan. SA’s economic malaise isn’t going to be solved with another 10-point, or 20-point or 50-point plan.

To my mind, there is an odd perversity here. In truth, the new economic plan is actually an improvement on the ANC’s past efforts, in the sense that at least the radical economic transformation jingoism has been more or less put to bed, and the plan has a pragmatic gloss.

And yet, it’s simultaneously depressing because if something as dramatic as the Covid-19 calamity is not sufficient to induce a root-and-branch rethink of SA’s economic policy, what will?

Oddly, the issue of the claimed oligopolistic nature of the banking system constitutes a key to the fundamental problem because it illustrates the extent to which the ANC’s economic front bench, with a few notable exceptions, is sticking to its guns.

Why is that so?

First, to claim that SA’s banking system is an oligopoly is to signal to the world that your grip on reality is a bit sketchy.

South Africa has 14 commercial banks, two co-operative banks and five foreign-owned banks which all operate in the retail market. Then there are 13 branches of foreign banks, including some of the largest banks in the world. There are also four mutual banks and three state-owned banks.

When I put this point to Enoch Godongwana, one of the ANC’s economic gurus and, in many ways, the man behind the latest plan, he says it may be true there are lots of banks operating in SA, but the ANC’s issue lies with the dominance of the “big five”, as the document does, in fact, point out.

Put brutally, in order to sustain the argument that the government needs to establish a state-owned bank, it is necessary to develop a bogus argument about the “oligopolistic” nature of the SA banking sector.

Yet even if you take just the big five, there is an easy way to test the claim. Competition authorities around the world have for years used something called the Herfindahl-Hirschman Index (HHI) to measure market concentration in their deliberations on whether to permit mergers.

Great. So let’s assume that only the big five operate in SA, which is just nonsense, as pointed out above. Tyme Bank, one of the three new banks to emerge in the last few years, already has two million accounts. But anyway.

So what are you measuring? Turns out, if you do this calculation by assets, or by market capitalisation or by loans and advances, or income, and you assume the big five constitute 90% of the market (which they don’t: it’s less), you generally get the same figure of around 2,200. Hence, at the very worst, SA’s banking system is a moderately concentrated market place.

That makes total sense. A market with five players each with more or less the same share gives you an HHI of 2,000. An oligopoly would have an HHI of over 3,000. Even in the largest economies in the world, five players with more or less equal shares does not send competition authorities screaming for the hills. In a small economy like SA, it signifies an arena of intense comparative competition, which any banking executive will tell you is what is going on out there. The ANC’s claim is simply straight from Mars.

Godongwana makes several other points in support of the notion. First, he claims banks are exclusive because they focus on people with money, leaving the poor largely behind. Second, that overall, credit extension is down, demonstrating banks are not assisting development. And third, they tend to be racist, he claims, because of a disproportionately low quantity of loans that go to black South Africans

These arguments are, of course, well-meaning. Sadly, the first is misguided, the second is complicated and the third is very difficult to demonstrate.

As it happens, the proportion of South Africans with bank accounts is extraordinarily high. Ironically, the credit for that goes to both government, which pushed for banking the unbanked from the late 90s onwards, and the industry, which responded to government’s plea with alacrity. Former head of the Banking Association South Africa Cas Coovadia points out that the banking industry was among the first to develop a financial sector charter way back in 1998. Only during 2020, Inteledex published a Transformation in Banking Report which showed the banking industry on track on a broad variety of measures.

Non-profit organisation, the Finmark Trust has done a huge quantity of research on the topic, not just about SA, but countries in the region. Just to take one example, 50% of the population of Botswana is formally banked (who, South Africans tend to forget, are now richer than South Africans on a per-capita basis). Contrast that with the roughly 77% of the SA population who have access to a formal bank account. 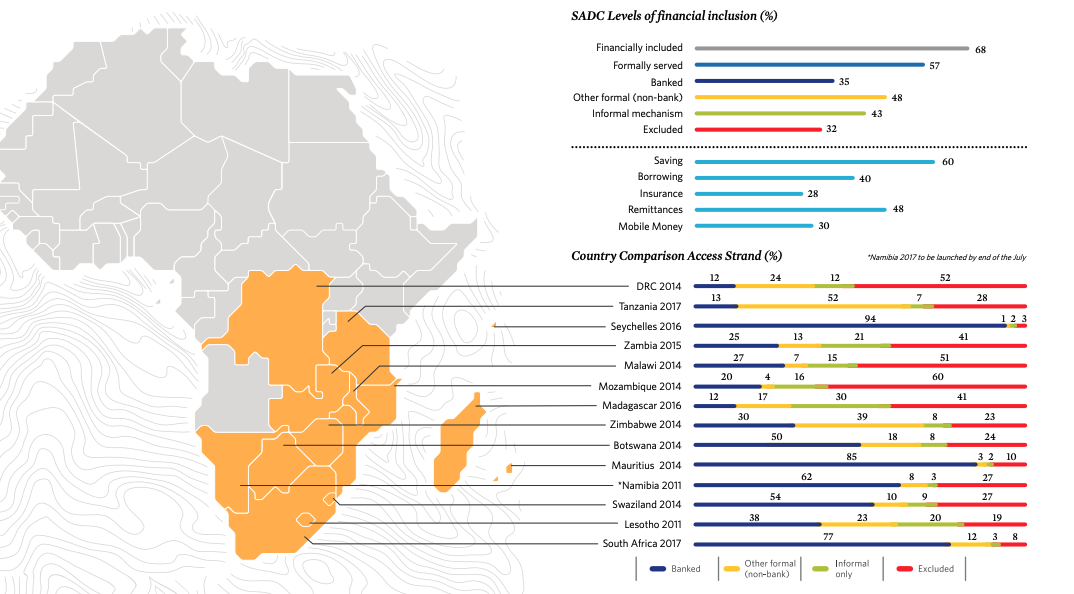 Credit extension in general is down in nominal terms over the past five years, but there is a correlation and causation problem here, because the economy is also in deep trouble. Consequently, in real terms measured as a proportion of GDP, it’s been kinda flat. So is the problem that banks don’t want to lend, or is it that the poor economy is dampening the demand for loans? 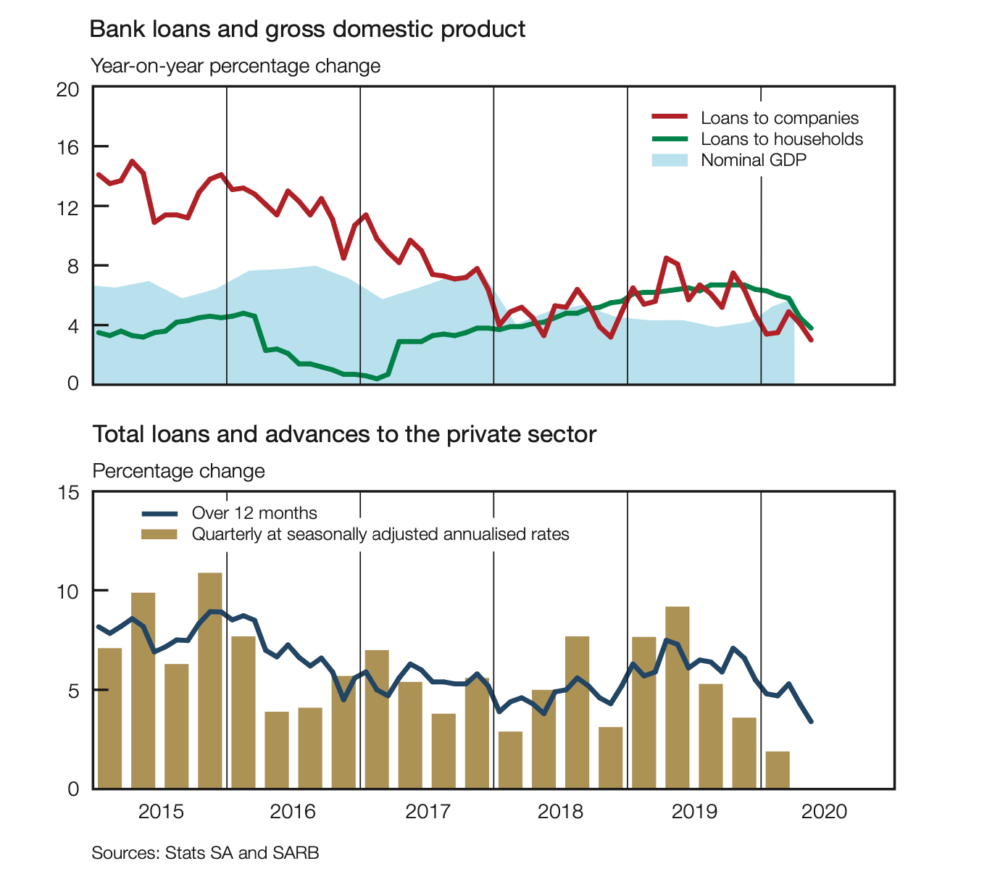 The same sort of issue affects lending patterns across society. It’s, of course, possible that banks consciously or unconsciously lend less than they should to black South Africans, as Godongwana claims. But that may equally be a consequence of credit conservatism because of a declining economy rather than racial bias.

None of this is to say that SA banks are blameless. There have been accusations of collusion in the past and the Competition Commission has spent years trying to demonstrate this very fact. Personally, I find SA’s banking services massively expensive for the quality of service you get.

Yet none of this makes banks an “oligopoly”, which is normally defined as a situation in which a small number of firms collude, either explicitly or tacitly, to restrict output and/or fix prices, in order to achieve above-normal market returns.

One way to quickly check that is to compare the bank’s price-to-book ratio or price:earnings ratios with other industries or with banks internationally.

The comparison suggests SA’s big five banks vary widely, but on average they are if anything lower than their international competitors. Capitec is very high on both measures; Absa, Standard and Nedbank on the low end; and FNB in the middle. But on average, the big five SA banks are trading on around 12 times annual earnings, which is almost exactly the average of international banks, according to data drawn from S&P Capital IQ.

The real secret to the ANC’s complaints about banks does not in fact lie in the oligopoly charge, but the sentence which immediately follows the complaint. The ANC’s document says that proactive steps need to be taken to increase competition in the banking sector. “Processes towards the establishment of a properly capitalised and governed State Bank need to be accelerated.”

Put brutally, in order to sustain the argument that the government needs to establish a state-owned bank, it is necessary to develop a bogus argument about the “oligopolistic” nature of the SA banking sector.

Is it just my cynicism, or is the brutal truth that the actual underlying motivation is that sections of the ANC feel the need to create a new banking institution to, shall we call it, “provide credit”, particularly now that VBS is gone? DM/BM