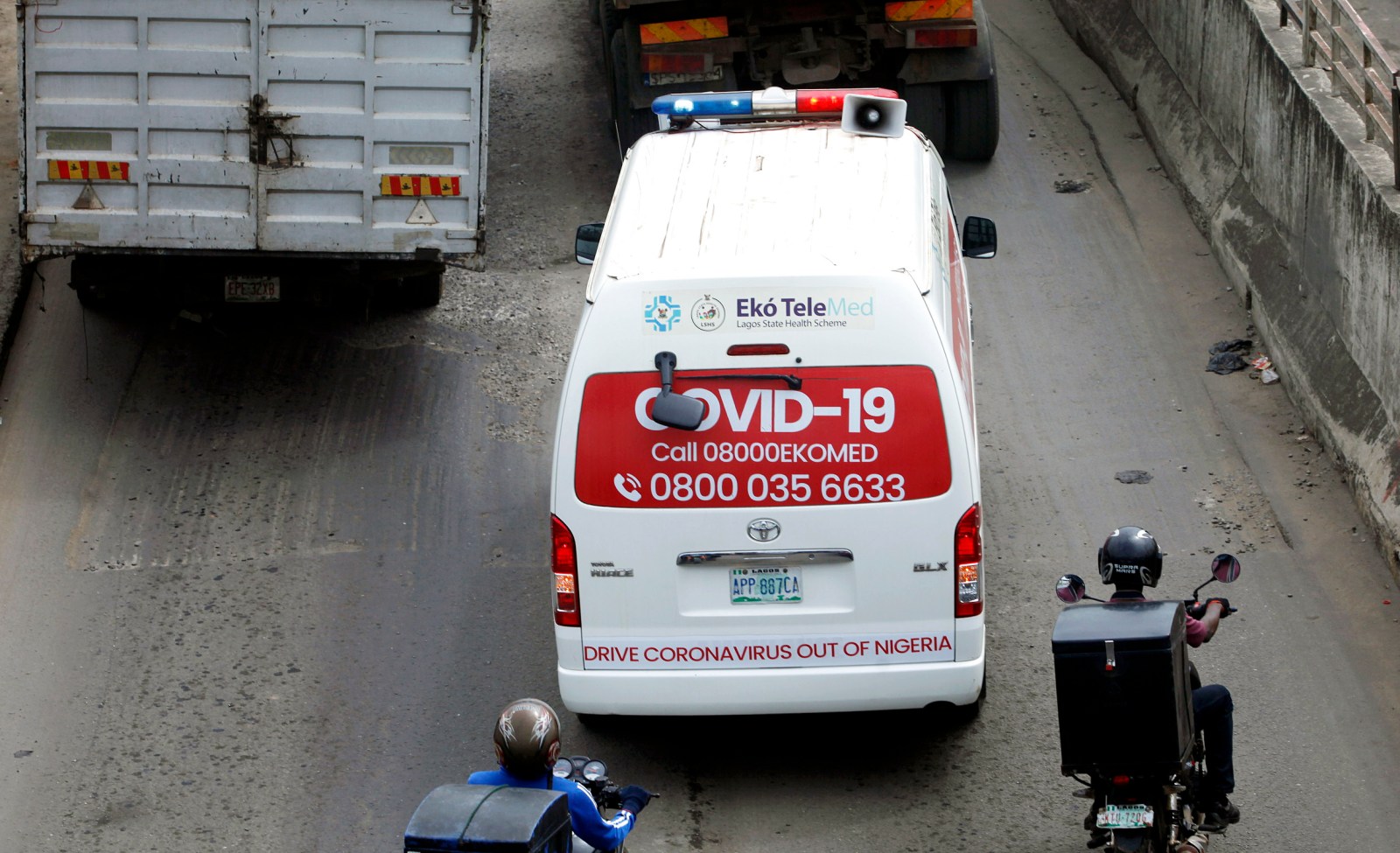 A dedicated ambulance for Covid-19 patients drives along a road near a food market in Nigeria's commercial capital Lagos, Nigeria, 04 May 2020. After a five week long lockdown to curb the spread of the coronavirus SARS-CoV-2 which causes the Covid-19 disease the Lagos metropolitan government lifted the ban on human and vehicular movements allowing the food markets and other essential services to open as schools and government offices remain closed. (Photo: EPA-EFE/AKINTUNDE AKINLEYE)

South Africa can learn much from Ukraine and Nigeria’s open e-procurement systems which ensure transparency relating to pandemic-related contracts, and allow journalists and citizens to analyse the details of such contracts.

President Cyril Ramaphosa announced on 23 July 2020 a variety of measures to deal with Covid-related corruption. Mere days later the media exposed that Madzikane II Thandisizwe Diko – the husband of presidential spokesperson Khusela Diko – had received contracts worth R125-million for Covid-19 personal protection equipment (PPE) from the Gauteng Department of Health.

The exposure of public sector corruption involving politically connected individuals has become the fodder of public discourse and media attention, and the report triggered a series of events which led to the exposure of further connections to the Gauteng MEC for Health, Dr Bandile Masuku, and sudden special leave for both Khusela Diko and Masuku.

For a country aching for strong action against corruption, particularly in this time of national vulnerability, the action taken against politically exposed persons signifies step one in the reckoning of accountability. However, what was lost in much of the reporting is that the contract was awarded on 30 March 2020 – nearly four months before the Sunday Independent report.

The newspaper based its report on “sources and official documents” and it is evident that the story emerged as a result of inside information, perhaps a whistle-blower, rather than information publicly available or systems that are in place to monitor procurement. Given the serious consequences of looting of money destined for addressing the Covid-19 pandemic, investigative journalism, while commendable, is a blunt instrument through which to monitor emergency procurement and ensure accountability.

In that address on 23 July, Ramaphosa noted that regulations had been issued to ensure that emergency procurement under the state of disaster “meet[s] the constitutional requirements of fairness, transparency, competitiveness and cost-effectiveness”. We have written elsewhere that while the system of emergency procurement does meet the legal requirements, this does not go far enough for an administration supposedly committed to addressing corruption. Proactively publishing information relating to the awarding of contracts for Covid-19 PPE and other goods and services should be the minimum of what we expect from the government, including the various provincial health departments and municipalities.

It has been well documented around the world that transparency in procurement dramatically decreases corruption. In Ukraine – where an estimated 20% of spending in public procurement had been lost to corruption – the introduction of an e-procurement system saved the country $233-million. The Ukrainian system enables the government to conduct all procurement electronically and, by making all transactions transparent, facilitates citizen monitoring of procurement tenders and contracts. Ukrainians have embraced this citizen participation: since 2016, more than 700,000 users have identified nearly 74,000 concerns.

It is a badge of shame for South Africa that, decades after the establishment of constitutional democracy, our basic systems of governance compare unfavourably to Ukraine.

Closer to home, Nigeria has also built a portal to facilitate transparent procurement. NOCOPO (Nigeria Open Contracting Portal), which is still in its infancy, has a specific Covid-19 procurement page where all pandemic-related contracts are listed. This has allowed journalists and citizens to analyse the details of such contracts and improve public knowledge and awareness of the government’s response to the pandemic.

NOCOPO was created through partnerships with Nigerian civil society, which demonstrates the benefit of a collaborative approach where the government recognises the role civil society and the media can play in monitoring public procurement, and thus in helping to identify corruption as it happens.

Corruption exposed when information is accessible

An example of how freely accessible procurement data can highlight corruption and lead to greater accountability is evident in the work of the Nigerian Public and Private Development Centre (PPDC) and its platform Budeshi (“open it” in Hausa). By analysing data on funds allocated to public healthcare centres in 2016, the PPDC was able to identify substantial differences in the amount budgeted for centres and the amount actually spent, and to point out that identical construction contract tender amounts suggested corruption. The PPDC continued to investigate the suspicious transactions and the publication of its research led to Nigerian authorities launching their own investigations.

In South Africa, a significant development to improve the transparency of the government’s financial information is Vulekamali. A collaboration between National Treasury and civil society coalition Imali Yethu – of which Corruption Watch is a member – Vulekamali is an online budget data portal aimed at deepening public participation in the budget process.

The conceptualisation of this project demonstrates government’s commitment to transparency and collaboration in respect of budget data, while the work done by Imali Yethu is indicative of a willingness from South African civil society to work with the government to make its financial processes more open and accountable.

Crises provide the impetus for swift and dramatic change. We know all too well that public procurement has long been an avenue for looting. The exposure of corruption related to Covid-19 funds shows that, despite the president’s “new dawn”, this has not abated.

The examples of Ukraine and Nigeria show that making procurement information public is a relatively simple, but strikingly effective way of addressing corruption within public procurement. If the South African government published all information on Covid-19 contracts, civil society and the media would be able to monitor these transactions in real time.

The cynicism of the South African public that accompanied the announcement of the International Monetary Fund loan displays a deep distrust in political posturing against corruption. To regain that trust there is a thirst for a proactive response to fixing the broken procurement system, particularly during the Covid-19 pandemic. Proactive publishing of procurement information would take the president’s commitment to protecting the public purse from mere statement to action.

We, as civil society, are willing and able to take up the mantle of monitoring public procurement. Mr President, please let us help you. DM/MC

Caroline James is a lawyer at Corruption Watch. Karam Jeet Singh is its Head of Legal and Investigations.