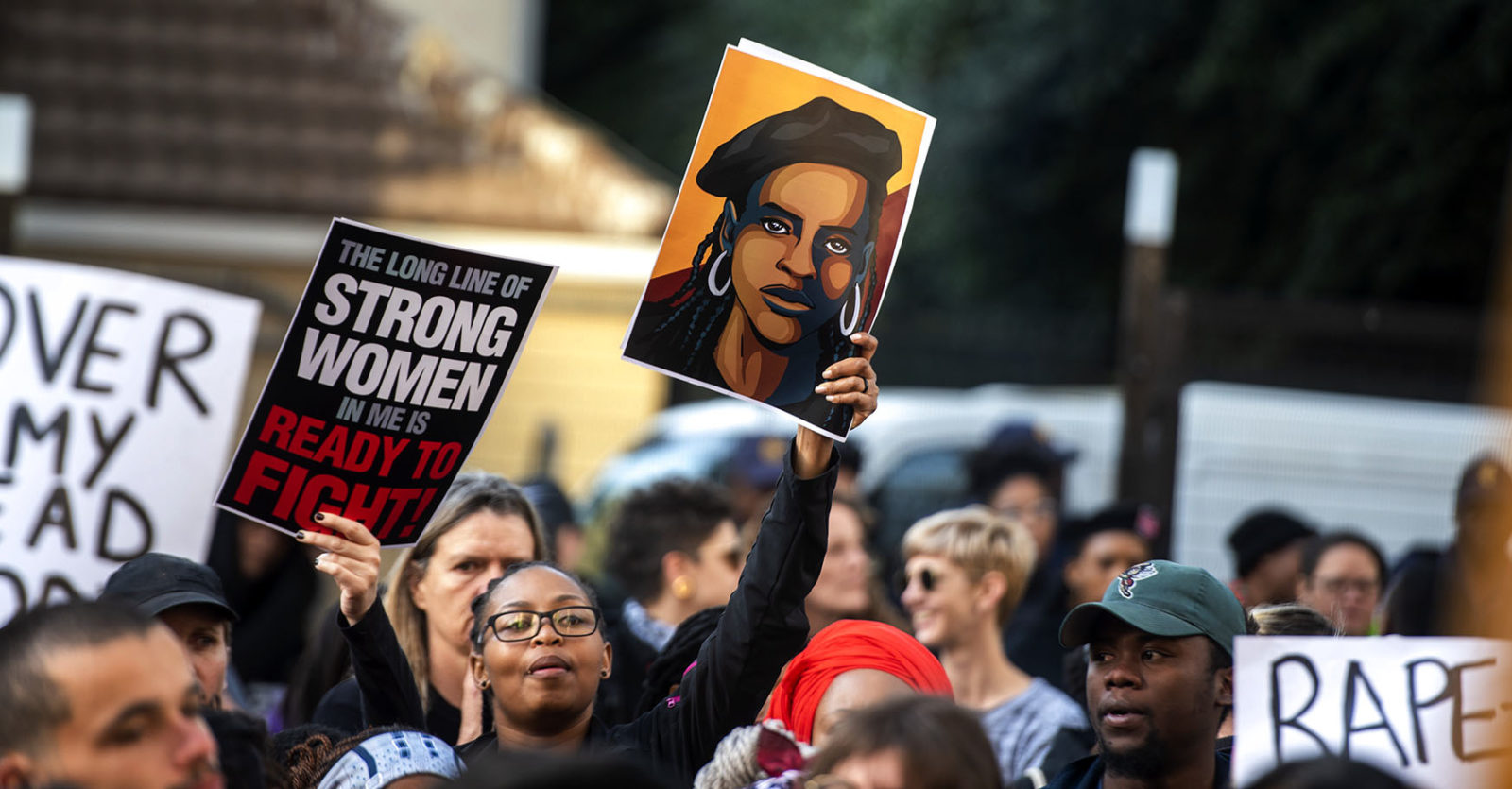 SANDTON, SOUTH AFRICA - SEPTEMBER 13, 2019: Protesters march against gender-based violence, organised by several NGO’s and organisations at the JSE in Sandton on September 13, 2019 in Sandton, South Africa. There has been a public outcry after the rape and murder of UCT student Uyinene Mrwetyana in Cape Town. Several protests and marches have been held across the country to highlight the plight of women and children who are constantly fall victims of gender-based violence. (Photo: Gallo Images/Alet Pretorius)

This week some civil society groups turn their attention to Women’s Month, while others set out to discuss the future political leaders of South Africa. The United Nations Development Programme (UNDP) will launch the assessment report on the Socio-Economic Impact Assessment of Covid 19 in South Africa.

As we begin Women’s Month, let us not forget the strong and brave women who marched to Pretoria’s Union Buildings on 9 August 1956.

In one of the largest staged demonstrations in South Africa’s history, about 20,000 women of all races marched to protest legislation aimed at tightening the apartheid government’s control over the movement of black women in urban areas.

For 30 minutes, the women stood silently outside the Union Buildings and then loudly began to sing a song specially composed for the protest. The song was called Abafazi Wathint’ imbokodo – when you strike a woman, you strike a rock.

On Monday 3 August, the Tshwane University of Technology will start its five-part Women’s Conversations on the Couch series to celebrate Women’s Month. This week join Moonira Ramathula, founder of Futballing Girls NPO as she discusses gender-based violence. 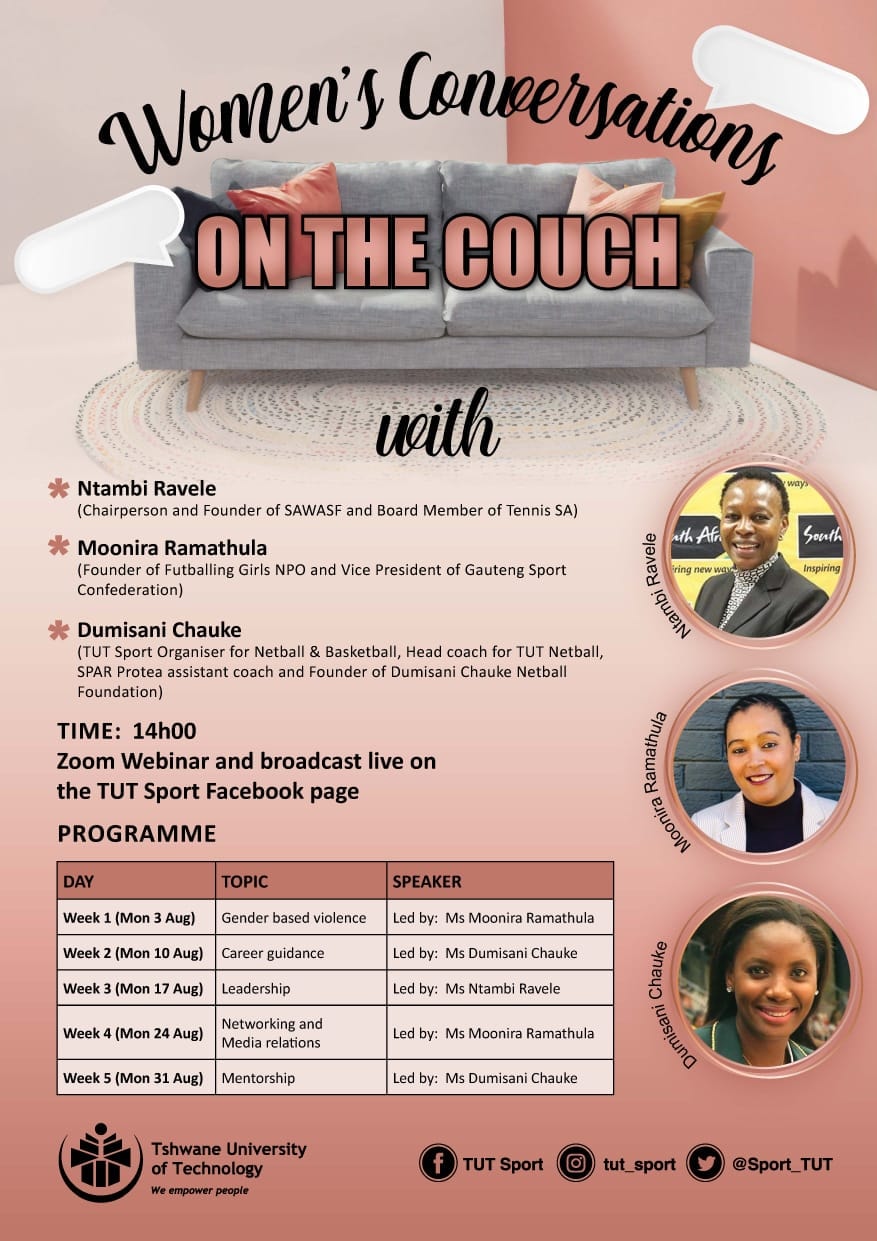 To commemorate Women’s Month, the Embassy of Ireland is holding a virtual discussion on Tuesday 4 August, on women’s lived experiences during Covid-19. The event, titled Women’s agency in the time of Covid-19, will be moderated by women’s rights activist Rosie Motene.

On Saturday 7 August, the Sport for Social Change Network is hosting a live locker room chat with the aim of opening a dialogue on women in sport. Speakers include Olympic and Paralympic swimmer Natalie du Toit and Muditambi Ravele, the founder and chairperson of South African Women and Sport Foundation.

You do not want to miss this one, catch the event by registering here.

Dust off your running shoes on Sunday 9 August and join the Catch Me if You Can Foundation as they host a virtual run to continue raising awareness for gender-based violence.

The Women for Change virtual run can take place anywhere and at your own pace. You can choose to run or walk for 5km or 10km on the day. Participants will receive a Women for Change Medal and a goodie bag upon registering. A portion of the entry fees will be donated to the TEARS Foundation and Rape Crisis.

Other happenings in civil society

The Protection of Personal Information Act No. 4 of 2013 (POPIA) has been put into operation incrementally since 2013, with several sections of the act having been implemented in 2014.

The remaining aspects of South Africa’s data privacy law, POPIA, came into effect on 1 July 2020. Businesses now have less than 12 months to comply with regulations.

On Tuesday 4 August, the Mail & Guardian has partnered with Fluxmans Attorneys to host a webinar on the legal implications of POPIA for employers and employees in a new era of privacy-centric workplaces.

On the same day, learn how to make and use biofertilisers and biopesticides with Biowatch South Africa as they launch a free online course made up of five weekly modules. Each module will include a theory webinar followed by an online community of practice to share experiences and challenges in making that week’s bio-input. To register, email [email protected].

Also on Tuesday, the South African National AIDS Council (SANAC) in collaboration with National Department of Health (NDOH), Joint United Nations Programme on HIV/AIDS (UNAIDS), and Global Health Strategies, is hosting a webinar titled Facilitating the continuation of services and meeting targets for HIV and TB programs during COVID-19 response in South Africa,

The discussion will focus on the opportunities to close the gaps and accelerate progress towards achieving the goals of the National Strategic Plan for HIV, TB and STIs.

The webinar will be moderated by Coceka Nogoduka (SANAC) and will feature perspectives from UNAIDS, the World Health Organisation (WHO), the President’s Emergency Plan for AIDS Relief (PEPFAR), the Global Fund, the Bill & Melinda Gates Foundation, and the NDOH.

Register for the webinar here.

The United Nations Development Programme (UNDP) Country Office in South Africa will launch the assessment report on the Socio-Economic Impact Assessment of Covid 19 in South Africa on Tuesday at 3pm. UNDP will present the findings of the assessment and have panellists from government (DPME) and the Human Sciences Research Council (HSRC) discuss the findings further. Keep an eye out for an article by Maverick Citizen journalist Zukiswa Pikoli who will be diving deep and asking some hard-hitting questions.

On Wednesday 5 August, the Gauteng Growth and Development Agency will host a live panel discussion with the Group’s CEO, Mosa Tshabalala, and key industry leaders to find solutions that will boost economic growth.

The event, titled Growing Gauteng together: towards the next normal, will be streamed live on CNBC Africa. Alternatively, you can register for the Zoom link here.

One year ago, the World Justice Forum convened hundreds of justice activists to share best practices and collaborate on strategies to close the justice gap by 2030, as promised under the Sustainable Development Goals. The forum concluded with the announcement of five winners of the 2019 World Justice Challenge.

On the same day, the World Justice Project (WJP) will launch a field report from the 2019 World Justice Challenge winners. Join the WJP and representatives of four of these projects for an online discussion of how their work has evolved over the past year in terms of impact, reach and innovation, and the challenges they have faced, particularly in the face of the global Covid-19 crisis.

At 3pm, the South African Food Sovereignty Campaign, together with COPAC and the Tshwane Leadership Foundation, is holding the third of a four-week virtual workshop on moving towards a food sovereignty future for South Africa.

This week, a practical and theory workshop will be taught by permaculturalist John Nzira. You will learn about indigenous foods, how to source them, and how to plant them. You will also be introduced to food commons and the importance of indigenous knowledge. You can join the workshop live on Facebook.

On Thursday 6 August, join Stellenbosch University’s Social Justice M-Plan as they host a virtual Social Justice Café on unconscious bias. Unconscious biases are social stereotypes (such as religion, race, and gender) about certain groups of people that individuals form outside of their own conscious awareness.

The event will feature several panellists and guest speaker Nene Molefe, an internationally acclaimed thought leader in diversity and inclusion. Connect with the organisers to register.

On Friday 7 August, the South African Institute of International Affairs (SAIIA) invites you to attend a workshop on Nuclear energy governance in Africa: lessons from Egypt, Ghana and South Africa.

The workshop will focus on case studies of nuclear programmes in the three African countries – discussing their background, scope, existing installations, governance, international commitments, and the way forward in terms of peaceful use of nuclear energy for development.

The event will also include a reflection on 75 years after the atomic bombings of Hiroshima and Nagasaki, by a representative from Nagasaki University. Register here.

Do not forget that at 2pm, the Call to Action Collective will be hosting their fifth virtual workshop in a 12-week series on the National Strategic Plan on Gender-Based Violence and Femicide (NSP-GBVF). The workshops are held every Thursday until 23 September.

Missed the previous webinars? Fret not, you can catch them here. You can subscribe to receive weekly updates on the webinars, including presentations and speaker bios.

This week, speakers (to be announced) will provide a legislative framework to understand the core components of similar laws relating to the NSP-GBVF. The event will be streamed live on Facebook and Twitter.

On Friday 6 August, State of the Nation invites you to a webinar with Herman Mashaba and Mark Sham, who will talk to Mashaba about his political plans and discuss the possibility of Mashaba becoming South Africa’s next leader. Book your spot here.

Also, on Friday is the fourth in our series of Solidarity Webinars, organised jointly by Maverick Citizen, Lawyers for Human Rights, Liliesleaf Farm, and the Rosa Luxemburg Foundation looking at issues of migration in the context of the Covid-19 crisis.

This week’s seminar is titled: Access to education for all who live in South Africa. For further information or to join the webinar contact [email protected]. DM/MC

South Africa is full of activists whose voices and campaigns need to be heard, and we want to report on all of them! So, wherever you live, if you have virtual events or meetings which you think other activists ought to know about, write to us at [email protected]

Also, please sign up for our weekly newsletter here.

Is the Children’s Amendment Bill about child protection, cost cutting or control?