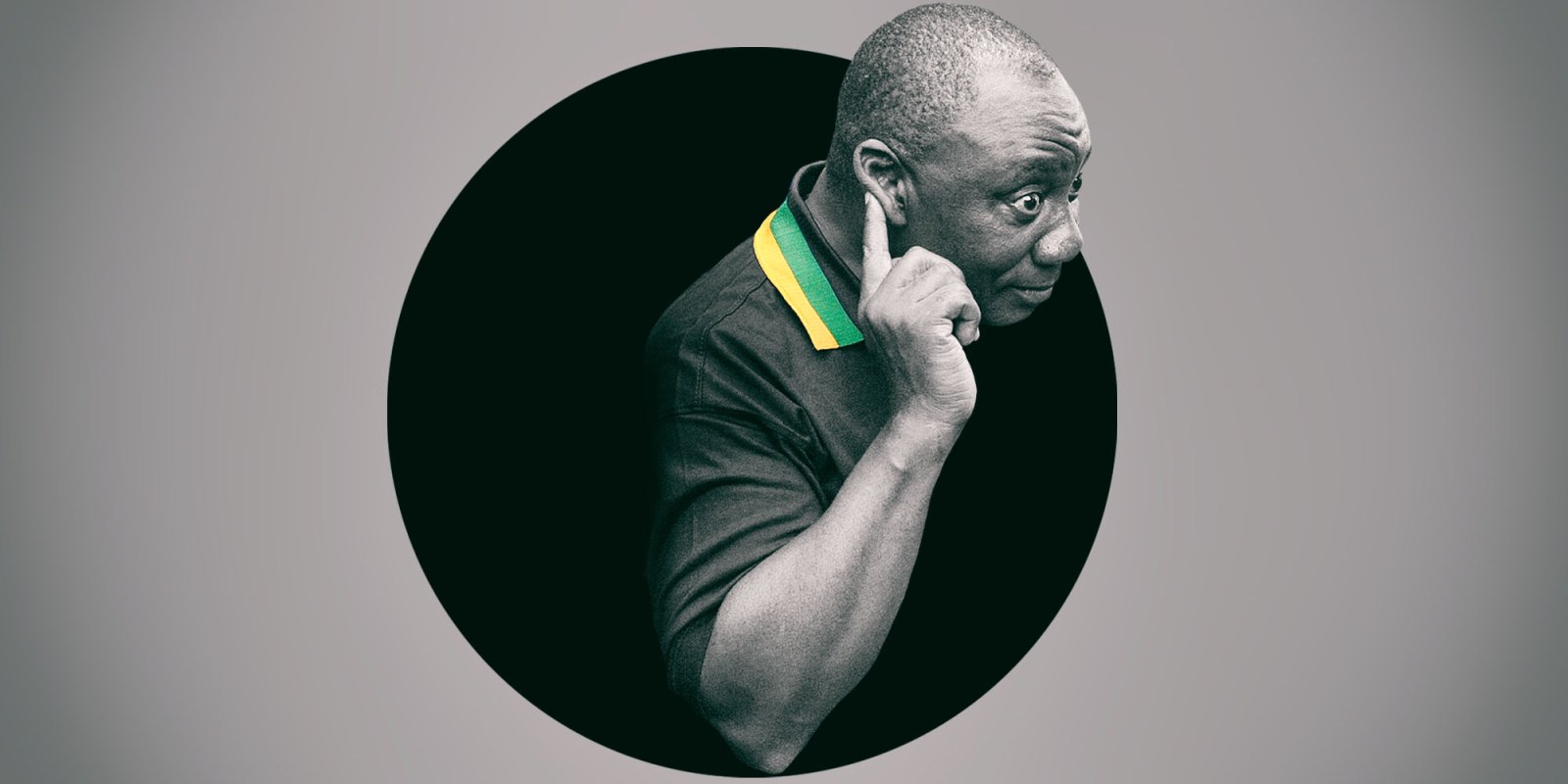 This is a summary of the trending, highest impact, and most active themes and their narratives related to social cohesion and division in South African public-domain social media conversations on 30 July 2020. Global trends affecting South Africa are also covered.

The killing of a young African American on 1 May sparked considerable conversation on Thursday. “A 16-year-old was murdered for throwing a sandwich in a cafeteria. When the school staff heard that he threw a sandwich, one of them sat on his neck for 12 minutes. He kept saying that he couldn’t breathe and died of cardiac arrest. His name is Cornelius Fredericks. SAY HIS NAME,” tweeted Hannah as part of a thread detailing Cornelius’ death. The thread included a video of the youth facility staff restraining Cornelius, and a petition requesting signatures so that justice can be served for Cornelius’ death. The tweet received over 300,300 likes and 168,200 retweets. 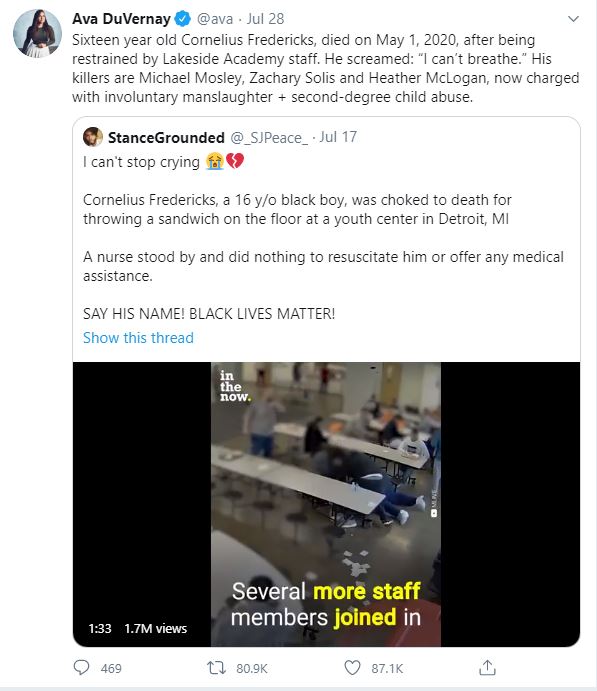 Ava DuVernay also shared the details of Cornelius Fredericks’ death, the names of his alleged killers and the charges laid against them, in a tweet that read, ‘Sixteen year old Cornelius Fredericks, died on May 1, 2020, after being restrained by Lakeside Academy staff. He screamed: “I can’t breathe.” His killers are Michael Mosley, Zachary Solis and Heather McLogan, now charged with involuntary manslaughter + second-degree child abuse.” The tweet received over 87,100 likes and 80,900 retweets.

It was never Number 1

On Thursday, 12,389 tweets contained the hashtag #itwasneverjacobzuma. @neutrams1 tweeted a video clip of Jacob Zuma being interviewed by Russian TV news. The tweet reads, “Take A Listen: Jacob Zuma explained why he never went to borrow from the IMF. What’s your view on him?” The post was retweeted more than 2,200 times and received more than 4,400 likes.

Responding to the tweet, @Dopam1ne commented, “There are many uninformed people out there. Let me share some info. This loan was part of a special IMF support package. SA is one of about 60 countries to make use of it. It comes with NO conditions and at an interest rate of 1%. Besides the looting issue, why not take it?” @dadarosky replied to @neutrams with, “Ahh he never went to borrow but he chowed money meant for the poor. He used 250 million to build nkandla palace while millions suffer. Besides…there was no pandemic during his term wtf. Stop telling us about that thief!” 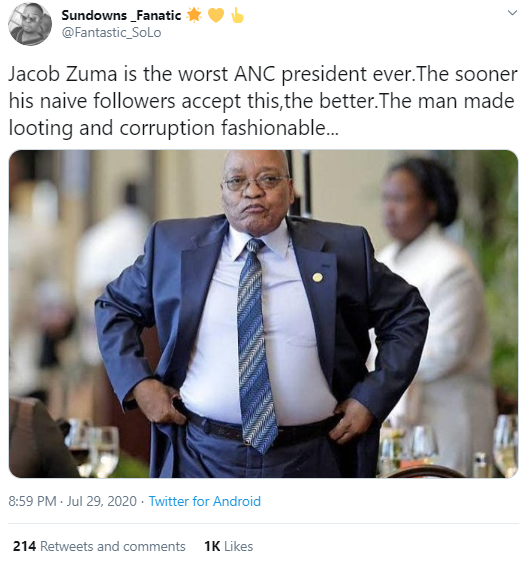 @Fantastic_SoLo tweeted an image of Jacob Zuma saying that he was the worst ANC president ever, and that he made looting and corruption fashionable. This post was retweeted more than 200 times and it has received more than 1,000 likes.

Following hot on the heels of #itwasneverjacobzuma, #cyrilmustgo found itself in second position among the highest trending hashtags for the day. At 17:18, @molf_patriotic tweeted screenshots of some of the satirical commentary that took place on Twitter relating to the looting of the Covid-19 kitty. This post was retweeted more than 3,400 times and it received close to 10,000 likes.

At 18:37, @BlackCulture_HM tweeted the images of South African celebrities who support the ANC, saying that they are the ones who allow the ANC to remain in power. Along with #cyrilmustgo, they tweeted that he should take the celebrities with him.

Political figure Mmusi Maimane called on the president to take action in his capacity as head of the African Union on issues currently facing Zimbabwe. Maimane explained that this is not the time for “quiet diplomacy” and for acting like you can’t “see what is happening next door”. Maimane’s post was retweeted more than 1,500 times and it received over 3,600 likes. 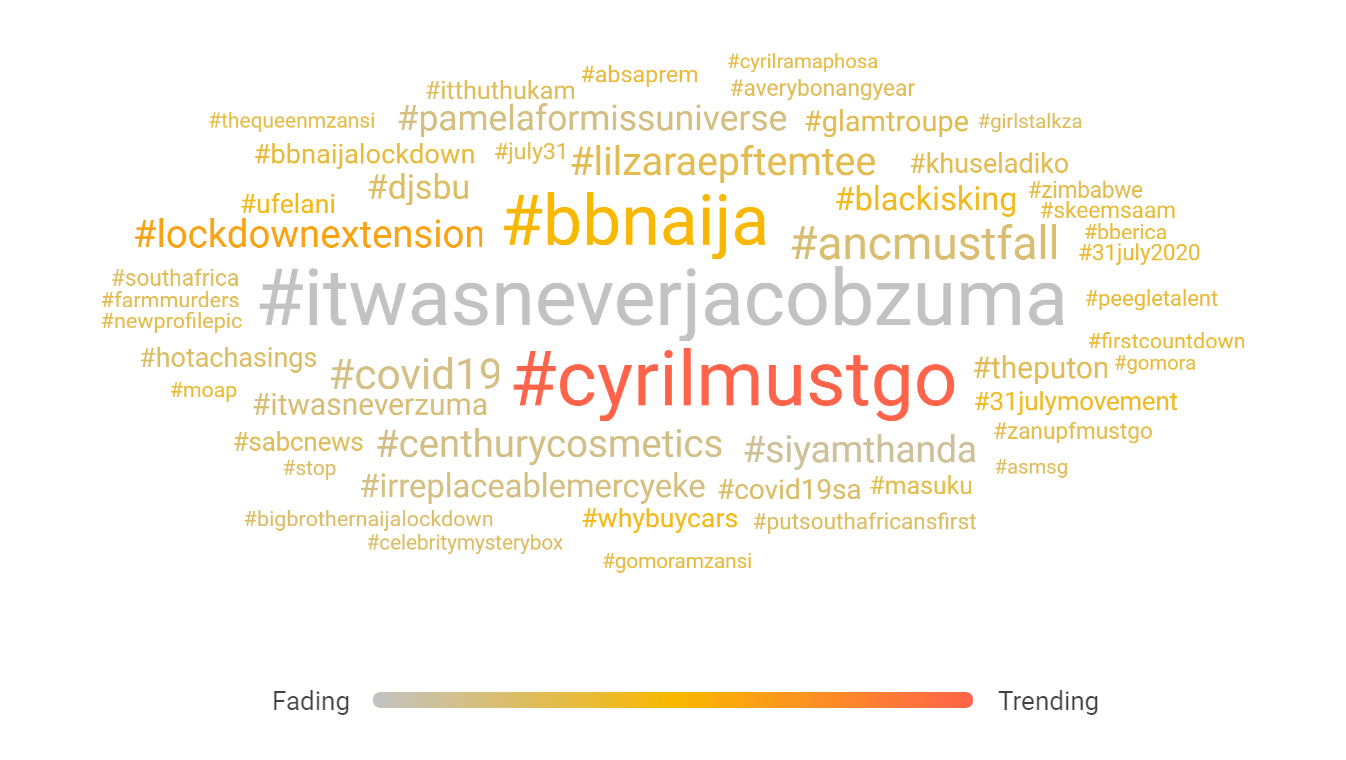 At 20:42, @Richards_Karin commented on a statement that President Ramaphosa had made regarding the consequences for those who break the law. She felt that his statement was incongruous with his actions in “allowing the reinstatement of the VBS looters Radzilani and Msiza”. This post was retweeted close to 100 times.

Standing against the ANC

On 29 July, @IAmLorenzoWhite tweeted, “I suggest that the Black, Mixed-race, Indian and White People of this country fighting each other cease fire and focus on our common enemy the ANC!” His post was retweeted more than 100 times and received over 600 likes.

Criticising the younger generation of ANC supporters, parody account @AdvoBarryRoux tweeted that even if we were to organise to fight against the ANC, the younger generation within the ANC will still be problematic. He went on to say that, “These young people have automatically defined themselves outside our collective struggle in defense of their future borotho.” The post was retweeted more than 180 times and it received close to 1,000 likes.

@kriswentzel9 felt that the ANC is a government that exists neither for white people nor for black people, but rather for its own interests. His post was retweeted more than 200 times since 29 July.

@HermanMashaba tweeted that in the last election, 18,5 million people did not vote. He added, “Too many South Africans have given up voting because there is not a party worth voting for” and concluded, “we are going to change that. #launching29August.” The video that accompanies this tweet has received more than 8,000 views and 900 likes.

In the video, he details how half a million black women supported the suffrage movement (a movement to win the right to vote for women), yet their support has been minimised and erased from American history. Noah details how both white women and black men were happy to ignore the contribution of black females in the suffrage movement, highlighting how black women faced both racial and gender discrimination. The video tweet received over 53,400 views, 1,600 likes and 509 retweets.

“Seeing Black women on the TL winning, purchasing homes, cars, graduating, new jobs. It’s the best thing👏😍,” tweeted Neo. This received over 7,300 likes and 1,300 retweets. Zintle Diko took to Twitter to share her good news, “Guys I got the job😭😭😭 First time ever going for an interview and actually sign a contract there and there 💃💃💃.” Her tweet received over 15,200 likes, 919 retweets and 404 comments, with people jokingly accusing her of corruption as she shares the same surname as the president’s spokesperson who is being investigated for corruption.

Meanwhile, @_awuvuyxna shared her amazement at a job offer she received two hours after posting a vision tweet with her wishes. She tweeted, “GUYS WTF?!!! THIS WAS 2 HOURS BEFORE MY INTERVIEW AND I GOT THE JOB!” The tweet received over 5,700 likes and 447 retweets.

In other Covid-19 news

In some positive news among otherwise gloomy headlines, South African artist Master KG’s song Jerusalema has taken the world by storm with the #JerusalemaDanceChallenge during the global pandemic. With over 56 million views, the song has led to a dance challenge, shared by Al Jazeera news posting, “Social media users say #JerusalemaDanceChallenge is bringing much-needed positivity to the world amid the ongoing Covid-19 pandemic.”

The post is accompanied by a video that has been viewed over 130,000 times, showing people around the world dancing to the tune, many with masks on. The post has received over 7,300 likes, retweets and mentions at the time of writing.

The pope doesn’t tweet often, but when he does, Twitter pays attention. In a tweet that has now garnered over 35,000 likes and over 9,000 retweets and comments, Pope Francis highlighted the importance of friendship in life, tweeting, “#Friendship is one of life’s gifts and a grace from God. Faithful friends, who stand at our side in times of difficulty, are a reflection of the Lord’s love, His gentle and consoling presence in our lives.” The post was in honour of Friendship Day celebrated worldwide on 30 July. DM