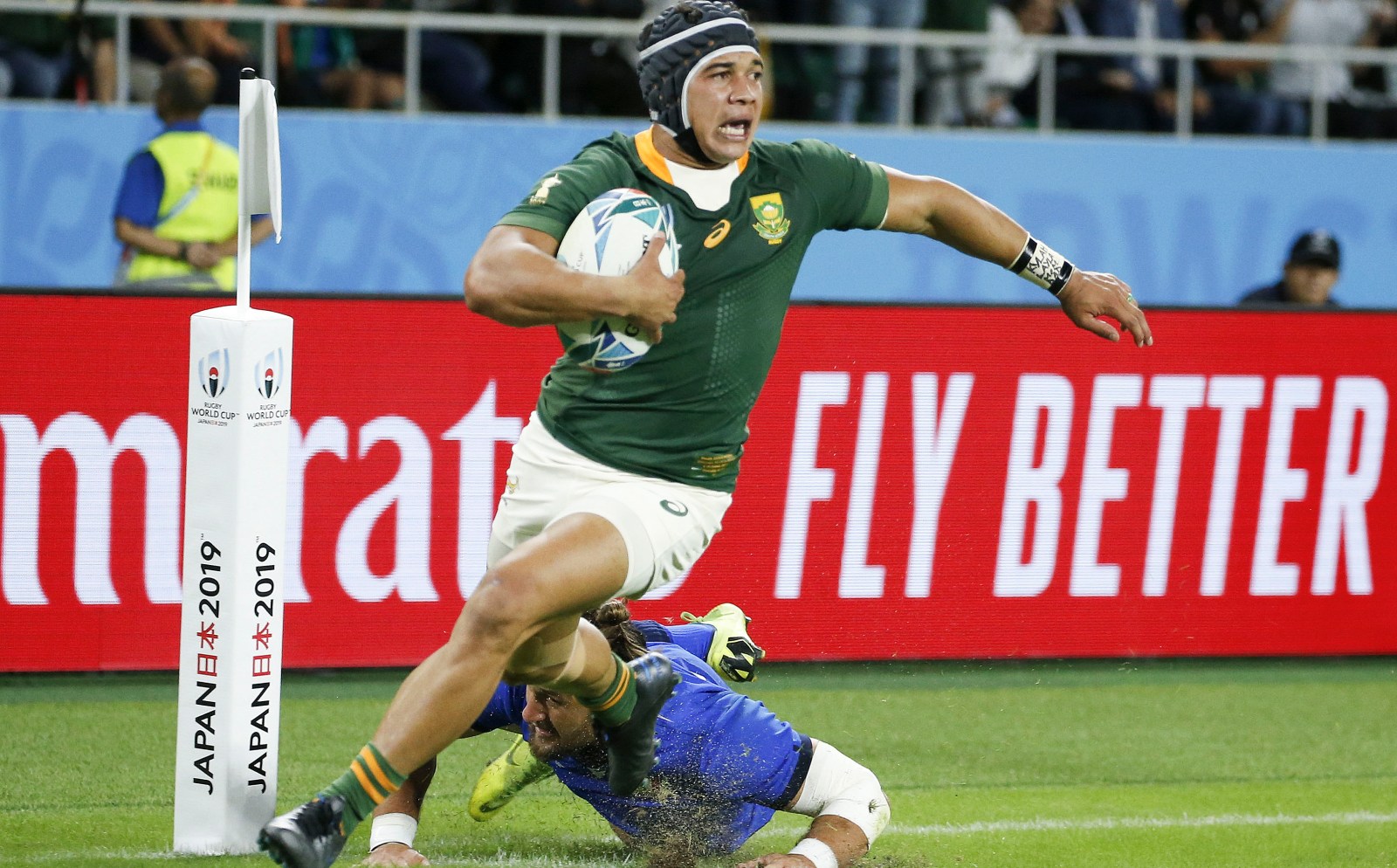 Cheslin Kolbe of South Africa (L) scoring a try past Michele Campagnaro of Italy (R) during the Rugby World Cup match between South Africa and Italy in Fukuroi, Shizuoka prefecture, Japan, 04 October 2019. EPA-EFE/MARK R. CRISTINO EDITORIAL USE ONLY/ NO COMMERCIAL SALES / NOT USED IN ASSOCATION WITH ANY COMMERCIAL ENTITY

World Rugby on Thursday announced there would be a seven-week Test window from October to December, meaning that clubs will have to release players outside of the normal three-week November window under Regulation 9. It’s bound to run into trouble.

World Rugby’s “temporary Covid-19 calendar” might yet be stillborn because despite “extensive consultation with stakeholders” some have warned that they are not happy with such a long Test window.

Under Regulation 9 clubs are obliged to release their Test players for international duty. These windows are seldom longer than three weeks at a stretch.

But under World Rugby’s new plan, in the northern hemisphere, the Six Nations will be completed between October 24 and 31. There will be one rest week followed by four Test weekends, finishing on 6 December.

In the southern hemisphere a condensed version of the Rugby Championship, which is usually held from August into early October, has been scheduled for 7 November to 12 December. New Zealand will host the entire tournament.

But that’s only for Test weeks. For Springbok players who are northern hemisphere based, they would need to be released for much longer because of the health and safety guidelines around Covid-19. It would require an extra two weeks away at least for Bok players who need 14 days quarantine in New Zealand.

This scenario is not covered in the temporary regulations.

As it stands now World Rugby’s proposed dates do not take into account a two week quarantine window. For a Test to be played on 7 November (the Test week is therefore 1-7 November), the Boks would need to start their quarantine in New Zealand on 18 October.

It is a massive oversight because as many as nine Springbok 2019 World Cup winners could miss the first two weeks of the Championship if they can only join the squad in New Zealand on 1 November.

To add to the complications for the Boks, there is still no confirmed return-to-play date for a domestic Currie Cup competition. It leaves Bok coach Jacques Nienaber unable to make precise plans.

He has already stated that his players would ideally need four weeks of training and four matches to be ready to play in a Rugby Championship. That wish is looking increasingly unlikely.

New Zealand and Australian teams are currently playing in domestic versions of Super Rugby because Covid-19 restrictions in those countries have been eased. They are way ahead of South Africa in terms of readiness after seasons were suspended in March.

“New Zealand will definitely have the advantage and if we don’t start returning to training and playing soon, they will be almost three months ahead of us,” Nienaber told the Maverick Sports Podcast recently. “Resting does have its advantages, but no player has become better by not working on their game.

“It’s one thing to freshen up a body, which is necessary, but it’s another thing to stay on top of your game, develop your skills and become stronger and fitter if you are sitting around. New Zealand players are getting better because of the competition they have at the moment.”

In April, France’ Ligue Nationale de Rugby (LNR) cancelled their 2019/20 season and made plans to start the 2020/21 season in September.

Last week the LNR warned World Rugby that they were unhappy with the Test window proposal and hinted at legal action. In a statement they said:  “If this extension of the international window covered by Regulation 9 is adopted for the fall of 2020 by the World Rugby council on 30 July, it will be a unilateral and unbalanced decision, taken against the position of the professional leagues, and in particular of the LNR which expressed on several occasions its disagreement with World Rugby during the last weeks.”

On Friday the LNR told Britain’s Telegraph newspaper in an additional statement: “It is an unbalanced, unilateral decision that does not take into account the League’s many compromised proposals. On many occasions, we have sought to establish a real dialogue with the aim to come to an agreement that would preserve the health of the professional clubs while showing solidarity with the Federations. We therefore disagree with this decision.”

World Rugby though, in their statement announcing the window, were adamant that all role players had had a voice in the outcome.

“The adjustment to the regulation has been approved as a temporary measure to mitigate the unprecedented impact of Covid-19 on global rugby activities and provides a welcome boost for players, teams, fans, and broadcast and commercial partners,” a World Rugby statement said.

“Approval follows extensive and productive dialogue between the sport’s major stakeholders, balancing the interests of the international game, the professional club game and player welfare to determine a schedule that will optimise the immediate financial recovery and funding of the sport at all levels.” DM