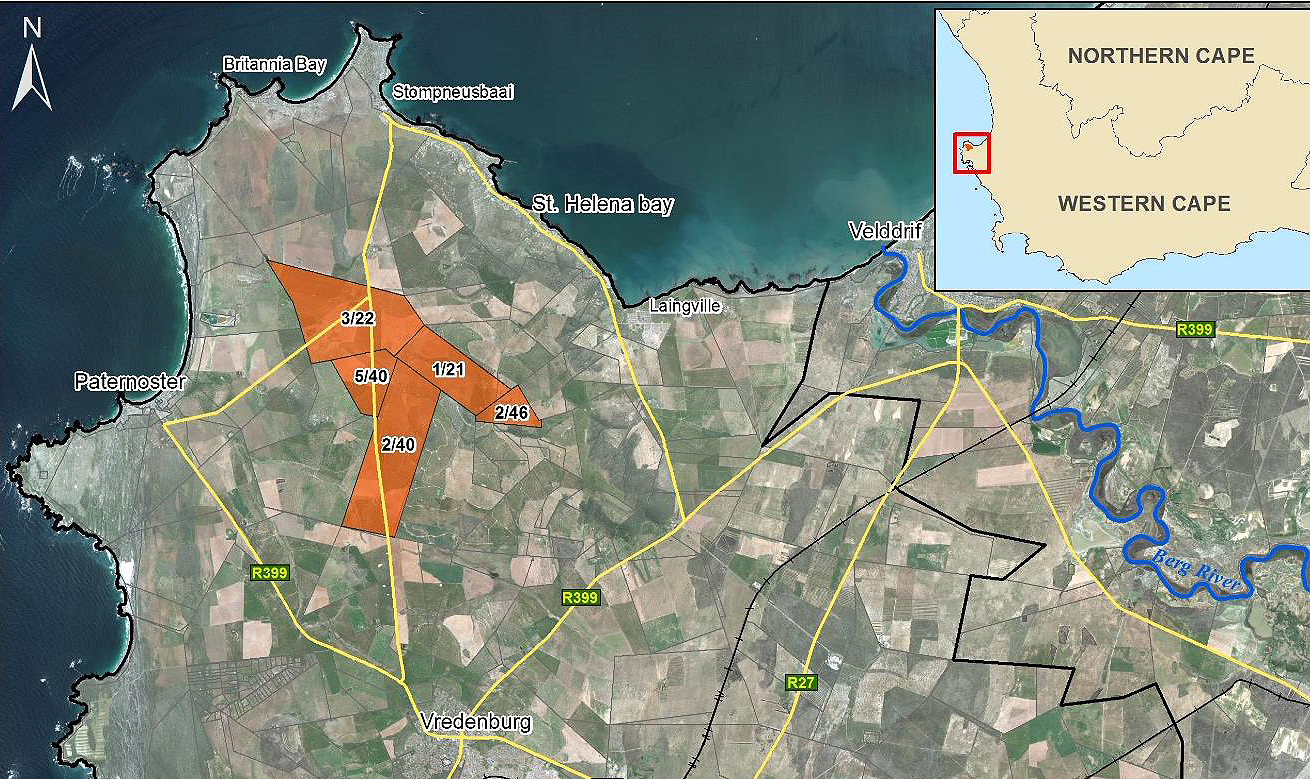 This map shows the location of the proposed wind farm on farmland on the West Coast Peninsula. Taken from the Final Environmental Impact Assessment Report by CES (copied for fair use)

New concerns raised over impact of transmission line connecting the project to the grid.

A recommendation by department officials on whether to uphold appeals against a massive wind farm project proposed for the West Coast Peninsula was due to have landed on the desk of Environment, Forestry and Fisheries (DEFF) minister Barbara Creecy this week.

According to procedure, Creecy should now make her decision within the next 20 days, but the situation has become significantly more complicated and there may be further delays in a decision-making process already extended because of the Covid-19 lockdown.

This is because of a second appeal by the owners of an existing wind farm that adjoins the proposed Boulders site against the DEFF’s environmental approval for a transmission line and substation linking the wind farm to the national grid.

Despite arguably constituting a single project, two separate environmental authorisations for Boulders have been issued by the DEFF. The first, in January, was for the wind farm site (this is the appeal currently before Creecy), while a second authorisation was issued in June for an associated 132 kilovolt substation and transmission line.

Vredenburg Wind Farm that has operated the 47-turbine, 94MW West Coast One wind energy facility since June 2015 on a property adjoining Boulders, is appealing both authorisations.

One of its arguments is that the potential impact of the Boulders wind farm and its transmission line should have been assessed together.

In its first appeal against approval for the rival wind farm, Vredenburg Wind Farm argued that because the Boulders project’s huge turbines would be situated immediately upwind of its own slightly smaller turbines, its access to the wind resource would be reduced because of the physical phenomenon of “wake effect”. This would cause “significant” revenue losses, estimated at millions, possibly even hundreds of millions of rands over the 20-year contract with Eskom, it claimed.

In its second appeal, against approval of the Boulders transmission line, Vredenburg Wind Farm notes that its West Coast One facility connects directly to Eskom’s Fransvlei substation.

However, a portion of the proposed Boulders’ overhead powerline is proposed to run from its on-site substation to a “Loop in Loop out” connection onto Eskom’s existing Aurora- Fransvlei 132 kilovolt sub-transmission line.

This will potentially impact West Coast One’s operations that should have been assessed in terms of statutory environmental impact assessment (EIA) regulations but haven’t been, it argues. Also, the separate assessment of the Boulders facility and of its grid connection impacts has resulted in a “defective” assessment process.

Vredenburg Wind Farm also argues in its appeal that, potentially, there will be direct and indirect socio-economic impacts on the existing West Coast One wind farm associated with the grid connection, including less income for a local community trust which is one of its investors. West Coast One spends a percentage of its revenue on socio-economic development projects within the community.

“These values, and attendant loss of socio-economic benefits, are significant, and potentially impact on the viability and sustainability of West Coast One … Nowhere has the socio-economic impact of the grid connection on West Coast One been investigated, evaluated or assessed,” its appeal states.

Vredenburg Wind Farm also raises in its appeal the fact that the electromagnetic impact of the Boulders transmission line on West Coast One’s existing transmission line has not been investigated, evaluated or assessed, and that this new line may cause a loss of energy and have a financial impact on West Coast One. There is also a potential dust problem that can cause flashovers – electricity arcs resulting in short circuits.

“It is well documented that the build-up of dust contaminants on insulators can enhance leakage current of the surface of the insulator casing, with the end result of flash-overs transpiring. Due to conductivity of the saline content of the moisture in the air, the problem is further exacerbated.”

The direct and cumulative effect of dust generated by Boulders will exacerbate problems with dust deposits already being experienced by West Coast One, Vredenburg Wind Farm argues. DM