‘We will make your lives miserable’: TAC throws down the gauntlet to Eastern Cape Health Department 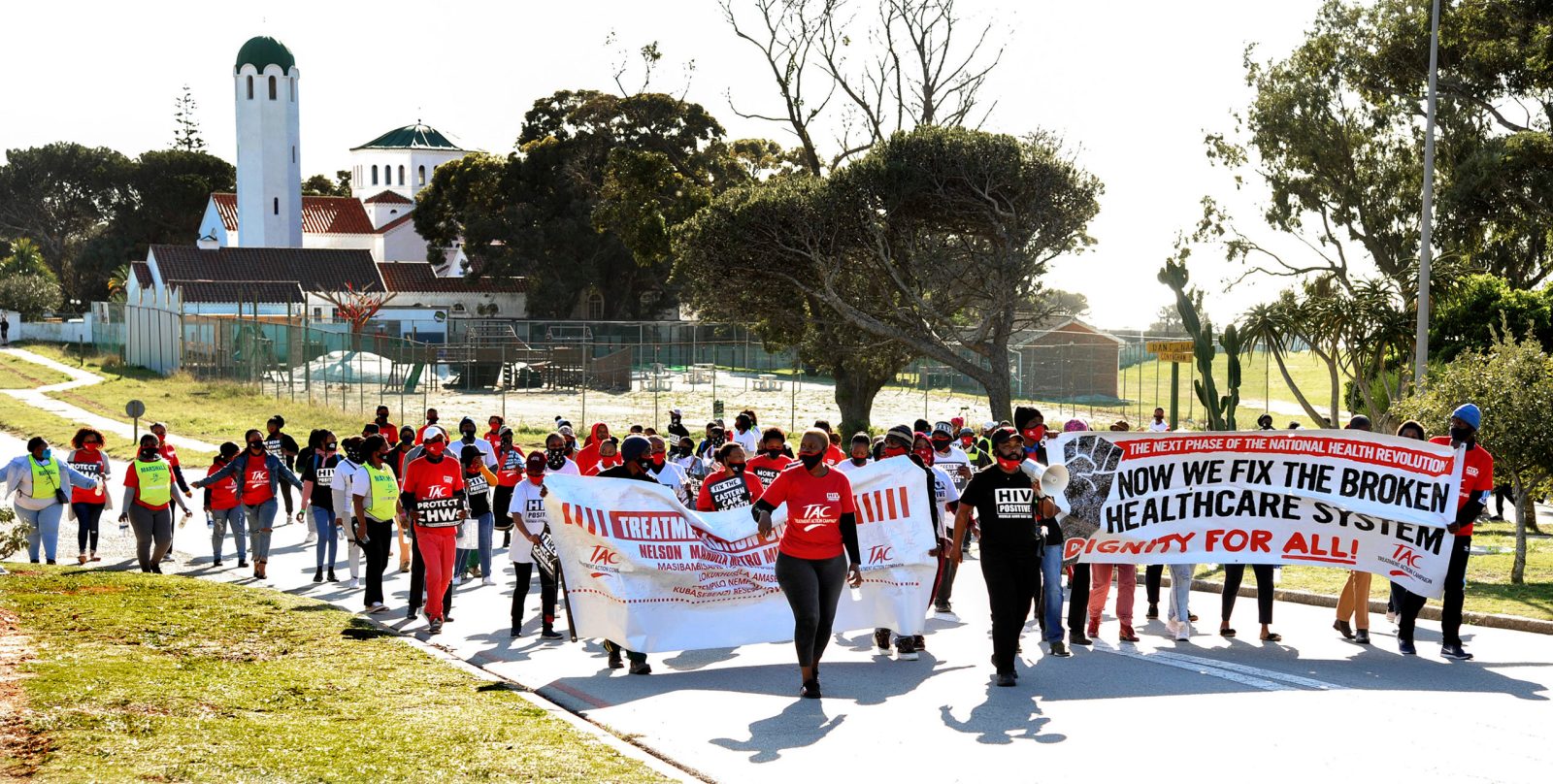 Angry activists who gathered at the district head office of the Eastern Cape Department of Health in Port Elizabeth on Tuesday have related how people living with HIV and TB patients are forced to share medication or face defaulting on their medication as primary healthcare services in the Nelson Mandela Metro buckle under the strain of fear, Covid-19 infections, neglect and a failing ambulance service.

Led by the Treatment Action Campaign’s Anele Yawa, 50 protesters vowed to keep going until some action is taken by the Eastern Cape Health Department to fix the province’s clinics.

Activists raised their life-and-death struggle to access ARVs and TB medication at clinics in the metro and to receive any meaningful medical help.

Yawa said they have given the department seven days to get back to them and fix the problem.

“The state of the health system of the Eastern Cape can no longer be ignored. As the wave of the Covid-19 pandemic gains momentum, it is exposing decades of dysfunctionality and failures of the system.”

The memorandum requests that the department makes its Covid-19 response plan public, provides a revised staffing plan, and deals with mismanagement, corruption and wasteful expenditure of resources.

Referring to an incident earlier this month where the SAPS Public Order Policing Unit was called in and violently removed a group of 51 healthcare workers from the department’s head office in Bhisho, the organisation further called for the “immediate sanction of [Health MEC Sindiswa] Gomba and [Head of Department Dr Thobile] Mbengashe”.

“We also call for the reprioritisation of the fight against HIV and emphasis on testing and welcome-back services initiating people living with HIV back into care,” the memorandum reads.

Yawa added that communities dependent on public health facilities for assistance must “put their loved ones in a car and take them to the nearest private hospital”.

“Go there and demand treatment. The government will have to pay,” he said.

He also demanded information on what had happened to a R3.9-million project to refurbish the day hospital, as work had been abandoned halfway by contractors in March after they were not paid.

This led to hundreds of patients being treated in about a dozen small wooden cubicles.

The protests followed a letter of demand sent to Dr Sibongile Zungu, head of the province’s newly created Project Management Unit, by Section 27 on behalf of the TAC, the Igazi Foundation and the Eastern Cape Health Crisis Action Coalition (ECHCAC).

Activists from Motherwell, another Covid-19 hotspot, who asked to remain anonymous as they fear reprisal, said that most of the clinics in the area were no longer operational.

“On 14 May ECHCAC addressed a letter to Gomba requesting an opportunity to provide their input in the province’s Covid-19 response plan and requested that their structures be allowed to participate on district and provincial level.

“The state of the healthcare system has drastically deteriorated, directly impacting on the rights of healthcare users. We are therefore pleased to learn of the appointment of the Project Management Unit to address the various challenges facing the province.”

The letter further states that the TAC, Igazi and ECHCAC are of the view that civil society representation is necessary and beneficial for the Covid-19 Project Management Unit.

“This will enable issues impacting on the rights of healthcare users to be raised expeditiously and addressed.”

The deputy chairperson of the TAC in the province, Thembisile Nogampula, said they were tired of the department and specifically the district health management dragging their feet when it came to holding people accountable.

“Nobody ever came to sit with us. There are no door-to-door campaigns happening. We have deliberately been sidelined,” he said. “We have a huge challenge with ambulances in the metro. You can’t just have one ambulance for Covid-19 patients.”

He said the number of test kits has become so limited that a facility like the Laetitia Bam Day Hospital becomes overwhelmed with people looking for Covid-19 tests.

“People drive all the way to Uitenhage from Port Elizabeth to get tested. They are scared people will find out.”

He said if Premier Oscar Mabuyane was serious about implementing a ward-based strategy for hotspots in the province he must start talking to community leaders and not to councillors.

Yawa said that 11 nurses at Zwide Clinic became ill and one had died after nursing staff refused a request to stay away from work and self-isolate after one of them tested positive for Covid-19.

Activists from Motherwell, another Covid-19 hotspot, who asked to remain anonymous as they fear reprisal, said that most of the clinics in the area were no longer operational.

“Some are closed due to Covid-19. At some the nurses complain they don’t have personal protective equipment. At another there has been a break-in,” one of the activists says.

“People can no longer collect their medication. The clinics that are open only take a limited number of patients a day. People are starting to line up at 5am in the morning. It is a very serious problem. There is no personal distancing because people are very anxious. They just push each other. You have to go there and beg for help, otherwise the nurses will just chase you away.

“If anybody gets ill in Motherwell it won’t help to call an ambulance. They won’t respond. If they do respond it will take hours for them to arrive.”

“People are often in line at the clinic at 3am already. The gate will open at eight but they will only see patients from 11. And then they only take a few, then the nurse comes out to say they are only seeing patients with serious problems. We have no Covid-19 testing. If you come to the clinic and you have a cough or a fever they say you must go away and go buy Panado somewhere at a shop.”

Andiswa Rhode, an HIV activist who works in Soweto-on-Sea in the metro, said their clinic had been closed for two weeks and then only open for three days before it closed again.

“When it reopened they had no ARVs, no chronic medication for diabetes, high blood pressure or even an inhaler for asthma. If you go to another clinic to ask for these pills they will chase you away.

“I started something on Facebook where people who still have ARVs can share their treatment. We are not all using the right medication but we take whatever we can get. It is very dangerous. We haven’t had the blood tests they said you should get for your lungs and your heart.

She said family planning services have been placed on hold.

“Many girls are going to get pregnant. They are told to come back in some months.

“People are often in line at the clinic at 3am already. The gate will open at eight but they will only see patients from 11. And then they only take a few, then the nurse comes out to say they are only seeing patients with serious problems.

“We have no Covid-19 testing. If you come to the clinic and you have a cough or a fever they say you must go away and go buy Panado somewhere at a shop.”

She said there is also an extremely limited ambulance service.

“I once called an ambulance for an oupa who was very sick. It came three days later. We had to find a car to take him in.”

The Department of Health’s director of communications, Siyanda Manana, did not respond to a request for comment, but in June Gomba, in a written answer to a question in the legislature, released a number of statistics relating to the collection of chronic medication in the metro.

She provided the number of patients who “collected or received their chronic medication” (through both programmes) since lockdown. Gomba explained that patients were given two months worth of medication during clinic visits while the country was in lockdown. In Nelson Mandela Bay 3,381 collected chronic medication in March, 2,679 in April, 3,116 in May and 1,877 in June. Gomba indicated that their June statistics were incomplete.

According to the Eastern Cape Department of Health’s Annual Performance Plan for 2019/2020, more than 57,000 patients in Nelson Mandela Bay were receiving antiretroviral treatment in 2017/2018. DM/MC