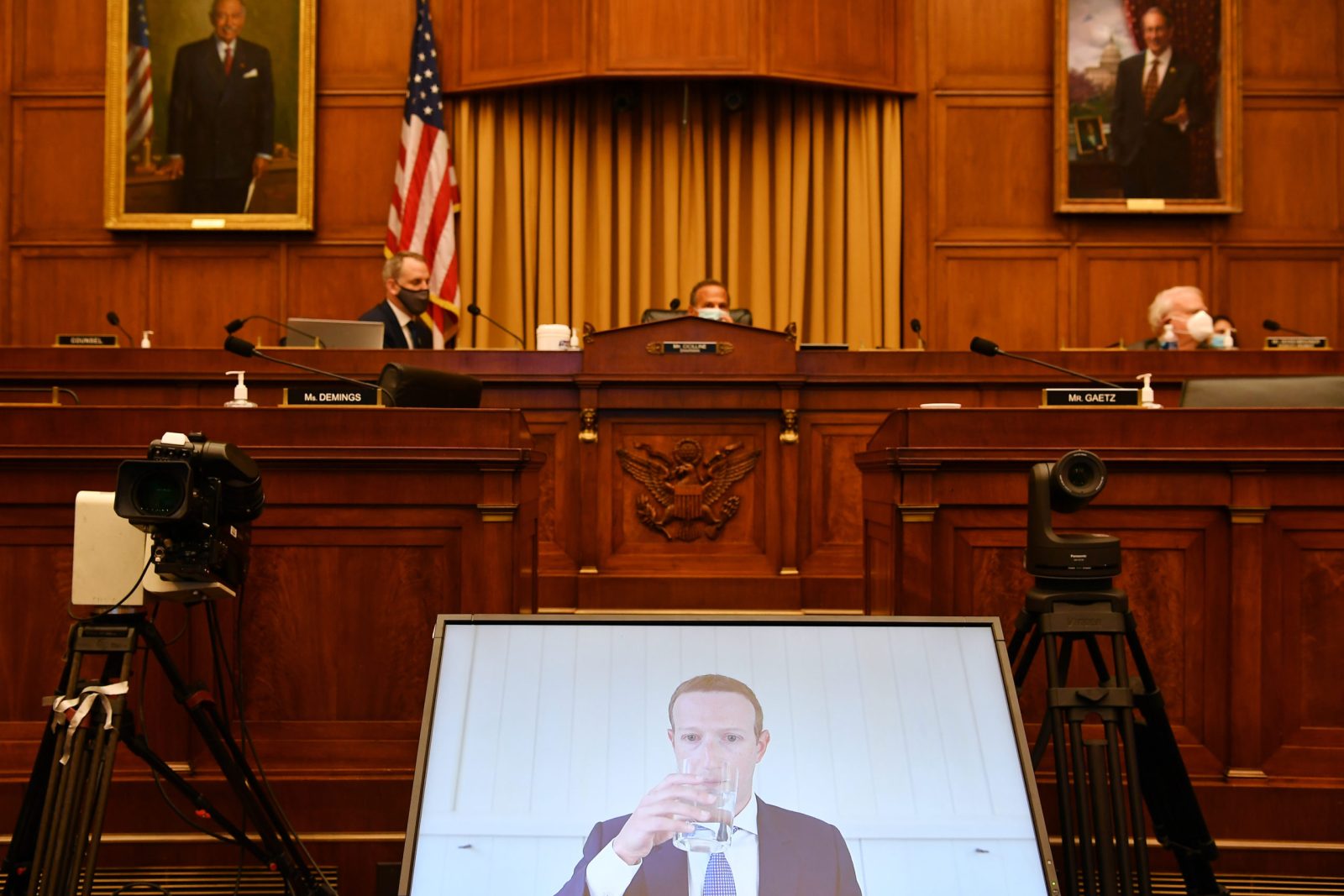 WASHINGTON, July 29 (Reuters) - Google and Facebook took particularly sharp jabs for alleged abuse of their market power from Democrats and Republicans on Wednesday in a much-anticipated congressional hearing that put four of America's most prominent tech CEOs in the hot seat.

The chairman of the U.S. House of Representatives antitrust panel holding the hearing said afterwards that the four CEOs had acknowledged concerning behavior.

“What we heard from witnesses at the hearing confirmed the evidence that we have collected over the last year,” Representative David Cicilline, a Democrat, told Reuters.

The videoconference hearing was the first time the four CEOs have appeared together before lawmakers.

Though it was Bezos’ first congressional testimony, he appeared the least fazed. Cook drew fewer barbed questions than Bezos and handled them efficiently. Zuckerberg suffered the most damage, stumbling at times when confronted with internal emails.

Pichai, CEO of both Alphabet and Google, took the most heat from conservatives on the panel and looked the worse for it, as he repeatedly told lawmakers he would be happy to look into various situations and get back to them.

The Big Tech hearing triggered scorn from viewers over its own tech issues. Bezos escaped questioning for about an hour in what may have been a tech issue and was caught on screen reaching for what appeared to be a snack.

Poor audio, flat-screen televisions switching off, and chief executives appearing together as thumbnails on a large screen led to mockery of the virtual set-up on Twitter.

Lawmakers descended into shouting at each other at points, with a pandemic twist. One yelled: “Put your mask on!”

Cicilline set the tone for the hearing when he began by accusing Google of theft. “Why does Google steal content from honest businesses?” he asked. He alleged Google stole reviews from Yelp Inc and threatened to delist Yelp from search results if it objected.

Pichai responded mildly that he would want to know the specifics of the accusation. “We conduct ourselves to the highest standards,” he added, disagreeing with the characterization.

Facebook’s Zuckerberg took a series of questions about the company’s purchase of Instagram in 2012 and whether it was acquired because it was a threat, as he dubbed it in an email obtained by the committee.

Zuckerberg responded that Instagram at the time was a tiny photo-sharing app rather than a social-media phenomenon.

In one of the more notable exchanges, Representative Pramila Jayapal, a Democrat, pushed Zuckerberg on whether Facebook had ever copied its competitors. “We’ve certainly adapted features that others have led in,” he said.

“How many companies did Facebook end up copying?” she asked. “Is it less than five? Less than 50?”

Jayapal pressed Amazon’s Bezos on whether the company used data from third-party sellers in making sales decisions. An Amazon executive previously had denied the practice under oath and was contradicted by a news report.

Bezos answered cautiously that the company had a policy against such actions. “If we found that somebody violated it, we would take action against them,” he said.

On the Republican side, Representative Jim Jordan accused the companies of hampering conservatives from reaching their supporters. Jordan pressed Pichai on whether Google would help former Vice President Joe Biden, the presumptive Democratic presidential nominee, win in November.

“We support both campaigns. We approach our work in a nonpartisan fashion,” Pichai responded.

Apple’s Cook rejected the notion there is nothing to stop his company from raising the commissions it charges in the App Store.

“I disagree strongly with that,” he said. “The competition for developers – they can write their apps for Android or Windows or Xbox or PlayStation. We have fierce competition at the developer side and the customer side, which is essentially so competitive I would describe it as a street fight.”

A detailed report with antitrust allegations against the four tech platforms and recommendations on how to tame their market power could be released by late summer or early fall by the committee, senior committee aides said.