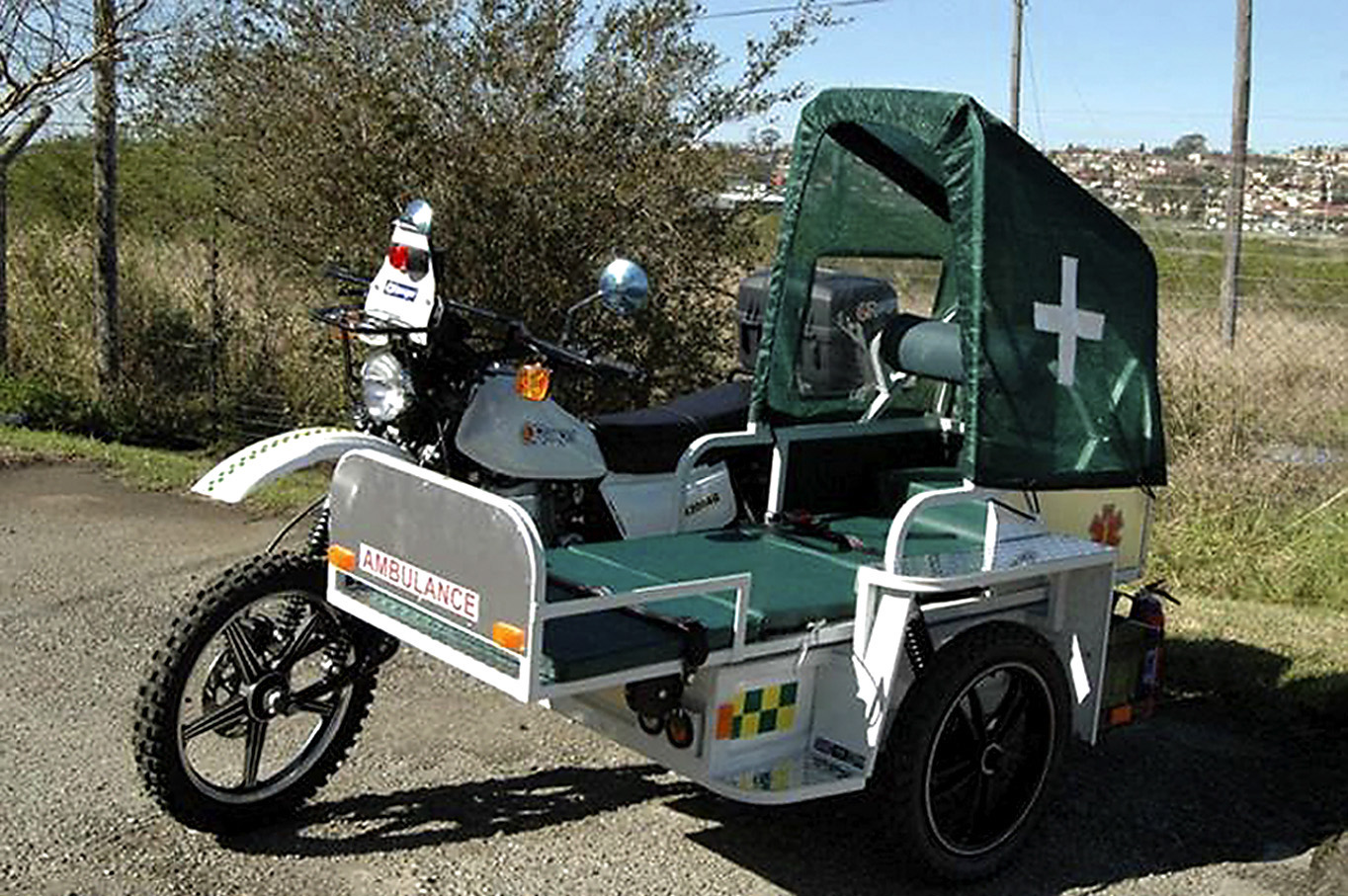 A prototype of the motorcycle and sidecar that were to be provided to the Eastern Cape Department of Health.( Photo: Supplied)

Correspondence between Eastern Cape government departments has revealed an attempt by the province’s health department in January to procure 100 23-seater buses to be used as mobile clinics — at a cost of R100m — failed because of an unpaid debt of R313m to Government Fleet Management Services. The Department of Transport and Government Fleet Management Service were subsequently bypassed by the Eastern Cape Department of Health when it directly tendered for 100 motorcycle clinics, at a considerably reduced cost of R10m.

The Eastern Cape Department of Transport has confirmed that it never received a request by the provincial department of health to procure scooters for them – even though it is the only body mandated to order the vehicles – and added that as the health department owed government fleet services more than R300-million in outstanding payments, it would have been unlikely it would have agreed to a request to handle the refuelling and maintenance of the vehicles.

Her spokesperson, Unathi Binqose, said the Department of Transport had the responsibility of procuring vehicles if it received a formal request from government departments.

“Whenever a department submits a formal request, we will, as per our mandate — through Government Fleet Management Services — procure accordingly. The same goes for the department of health and the scooters. But as things stand, no such request has been submitted as yet.”

In her letter, Tikana-Grootboom said that it was “unlikely” Government Fleet Management Services would have agreed to handle the maintenance and refuelling of the scooters as it was owed more than R300-million by the Eastern Cape Department of Health.

Further correspondence about the scooters revealed that the health department’s original plan was to order 100 23-seater mobile bus clinics in January 2020 at a cost of R100-million. This letter was signed by the deputy director-general of the department of health, Dr Litha Matiwane, who was the acting head of the department at the time. The letter said that at the time, Government Fleet Services had already procured 15 4×4 mobile clinics on behalf of the department.

Matiwane suggested that the 100 bus clinics be delivered in two tranches over two quarters, according to Matiwane, for “cash-flow” purposes. Matiwane indicated in his letter that the health department would reimburse Government Fleet Management Services in full for the clinics.

In a terse answer from Government Fleet Management Services dated 23 March, the health department is described as having a history of “not making good on their financial commitments” and the request to procure the mobile clinics was refused unless the provincial treasury was willing to provide guarantees.

Shortly afterwards, on 6 April, Tender SCMU3-20/21-0022-HO, was advertised for motorcycles with a sidecar for use in community health outreach services.

Concerns were raised over the suitability of scooters to be used as ambulances, and Health Minister Zweli Mkhize confirmed in a written answer to a parliamentary question that the vehicles did not conform to South African standards for the transportation of patients.

At the start of the 2020/2021 financial year in April, the department of health had R3-billion in outstanding payments to service providers with a predicted 11% shortfall by the end of this financial year.

Due to President Cyril Ramaphosa declaring the outbreak of coronavirus infections in the country a national state of disaster in mid-May, the provincial health department received extra funding from the national department of health to use for its Covid-19 response.

The chairperson of the province’s health committee, Mxolisi Dimaza, said the investigation into the procurement of the scooters was ongoing.

“The Provincial Treasury have indicated that they have been mandated by the Premier to do investigations in all Covid 19-related procurements. We are therefore awaiting for that report as far as scooters are concerned.”

In a report on the issue provided to the portfolio committee, Brian Harmse, from Fabkomp, the company that won the tender for the manufacturing of the motorcycle clinics, explained that management support would be vital.

He said the motorcycle clinics needed a safe space for the storage of the vehicles and spares.

After Fabkomp won the tender, the Eastern Cape Department of Health organised a hasty launch to coincide with a visit to the province by Health Minister Dr Zweli Mkhize. Harmse had only one mobile clinic at hand to display, but he was also asked to showcase the scooter ambulances he manufactures for export to other countries in Africa and for use by NGOs.

The health department’s director of communications, Siyanda Manana, did not comment on the latest developments, but has previously admitted that they showed the minister the wrong vehicles, He said they wanted to show the Minister “what was possible.”

Concerns were raised over the suitability of scooters to be used as ambulances, and Health Minister Zweli Mkhize confirmed in a written answer to a parliamentary question that the vehicles did not conform to South African standards for the transportation of patients.

Gomba subsequently said the scooters would be used to distribute medicine.

“Fortunately for us, we had, on the basis that people were starting to speak fast about the cost of the scooters, we have decided to take it to a post-award assessment and a negotiation,” Gomba told the joint meeting.

“We are completing that. But the mode of the scooters has been agreed together with the chair of the portfolio committee. We can only be changing the modelling of the sidecar… but the need of the scooter itself… it is still needed to carry out aspects of primary healthcare. Particularly your CCMDD (central chronic medicines dispensing and distribution)… they are going to be using those scooters,” she said.

On the same day, Eastern Cape Premier Oscar Mabuyane said the province had to have the capacity to distribute medicine (to rural areas).

“It is a service that we need in the Eastern Cape. We must consult with [the Department of] Transport to remove all doubts and the negativity that went with [the scooter project].”

The auditor-general has confirmed that the scooter contract is part of an investigation into the use of Covid-19 funding in the province. DM/MC