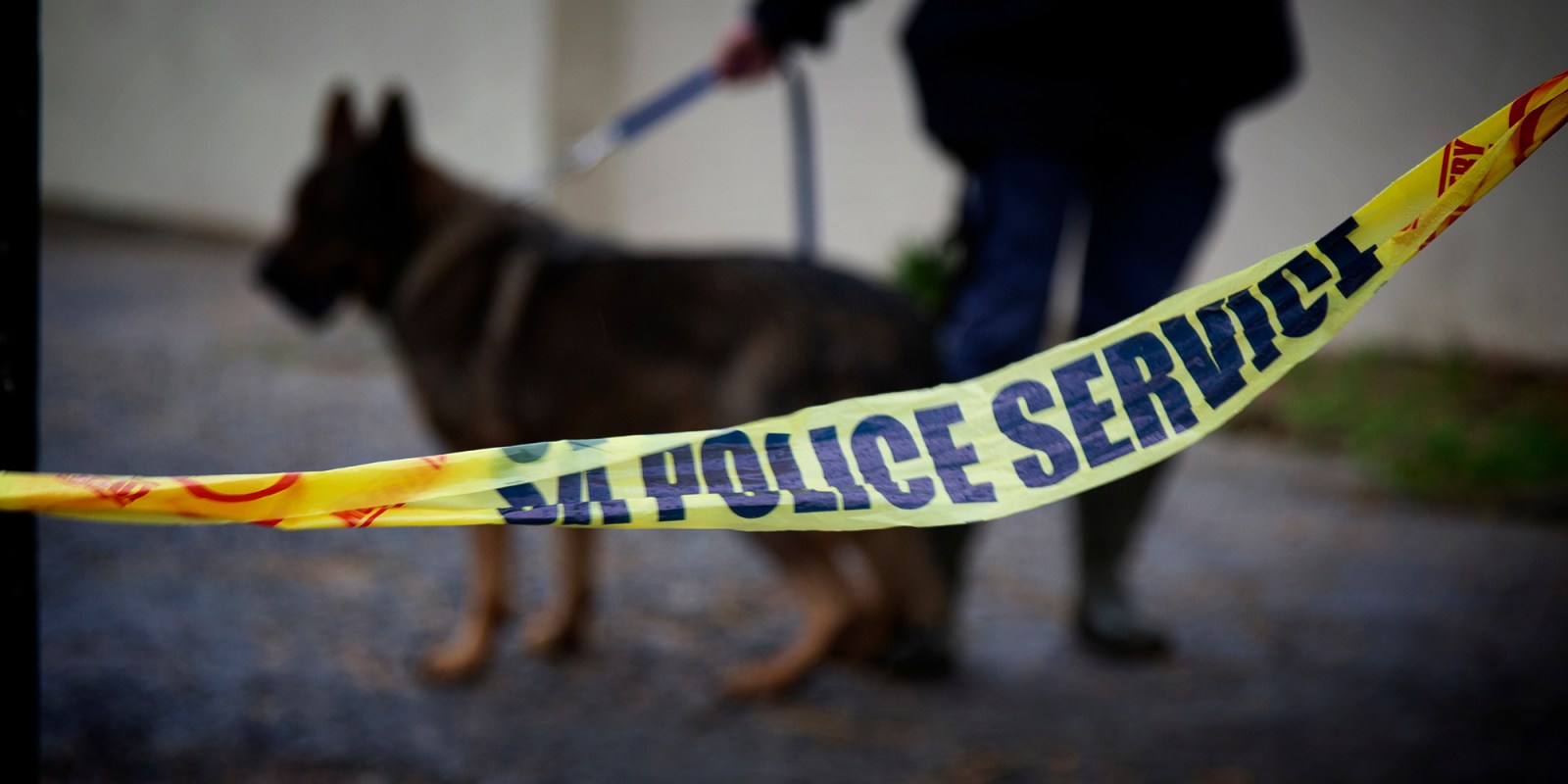 Security sources told Daily Maverick the five suspects arrested in the Kliprivier raid, including a Somali and an Ethiopian, are linked to the case in KwaZulu-Natal where Farhad Hoomer and 11 other men, including foreigners, were charged with terrorism, murder, attempted murder, extortion and arson in 2018. (Photo: Leila Dougan)

Security services seem to have been jolted into action by threats of retaliation against South Africa should it provide military support to fight an ISIS-affiliated group's insurgency in Mozambique.

The police raid and arrest of an alleged kidnapping syndicate in a Kliprivier house south of Johannesburg has been described by South African authorities as “one of the biggest breakthroughs we have had in our investigations of international terrorism in South Africa”.

Apart from kidnapping, the five foreign nationals are being investigated for links to the Islamic State (IS) fundamentalist group, security sources have revealed.

Security services seem to have been jolted into action by the threats that Islamic State issued on one of its websites earlier this month to retaliate against South Africa if it provided military support to Mozambique to help it fight an insurgency by an Islamic State-affiliated group in the country’s Cabo Delgado province.

There is growing speculation among security analysts that South Africa is already training forces to enter Mozambique, although the government has so far confirmed nothing – except to say it has been discussing assistance with Maputo.

National police commissioner General Khehla Sitole told journalists on the scene of the Kliprivier raid on Thursday 23 July that police had not ruled out the possibility that the five individuals arrested could be linked to an international terrorist group.

Security sources told Daily Maverick the five suspects, including a Somali and an Ethiopian, are linked to the case in KwaZulu-Natal where Farhad Hoomer and 11 other men, including foreigners, were charged with terrorism, murder, attempted murder, extortion and arson in 2018. The charges arose from a fatal attack on a Verulam mosque and the setting off of cellphone-triggered pipe-bombs there and across Durban.

Security sources told Daily Maverick that one of the men who had been released when the Hoomer case was thrown out was among those arrested at the Kliprivier house last Thursday. And they said a State witness in the Hoomer case had given police evidence about how the KwaZulu-Natal cell was linked to one in Johannesburg.

The sources said they believe the five people arrested in Kliprivier were part of the Johannesburg cell the State witness was referring to.

The sources added that Islamic State material had been found in the Kliprivier house – as it had been in a raid two years ago at Hoomer’s house in Reservoir Hills, Durban, when he and others were arrested. The police affidavit in that case said the Durban house was being used as a terrorist training camp, where IS “training DVDs” were found.

Police recovered eight IS flags from the house.

Kidnapping and extortion for money were part of the modus operandi of both the Durban and Johannesburg groups, sources told Daily Maverick. The police affidavit in the Hoomer case said the group extorted money from Durban businesses to fund their efforts.

“When money was not forthcoming, they were targeted with explosive devices similar to the one used during the mosque attack,” The Witness newspaper reported authorities as saying at the time.

The pre-dawn “intelligence-driven” raid in Kliprivier by the South African Police Services and the Directorate for Priority Crime Investigation (Hawks) followed leads about a 72-year-old Indian national who had been kidnapped in Johannesburg on July 2, police said.

Naidoo explained that the New Year’s Day attack which Sitole referred to was the drive-by shooting in Melville on January 1 this year. Two women were killed and six people injured at Poppy’s restaurant when the occupants of a black BMW SUV drove past and opened fire on patrons.

He was found the day after the raid, in Kensington, unharmed, police said. Some security analysts believe the Kliprivier group was only involved in raising finances, mainly through kidnapping and perhaps extortion, for terrorist operations elsewhere, including in Mozambique.

However, SAPS spokesperson Brigadier Vishnu Naidoo said that in their raid on the house, police recovered foreign military uniforms, several firearms including two AK-47 rifles, one Uzi submachine gun, two pump-action shotguns and several handguns, some of which were buried in the garden.

He added that the owner of the house in Kliprivier was still on the run.

News24 reported that the five men were “linked to an international kidnapping and extremism syndicate”.

It quoted Sitole as saying the Kliprivier house “has been used as one of the bases by the criminals, who are not [only] involved in one single kidnapping case, but it is an organised type of a syndicate”.

“As we were digging further, we uncovered that the same firearms found here, some of them have been identified in videos of other crimes like the New Year’s Day attack and extremism and kidnapping cases around KwaZulu-Natal.

“We have further discovered that there is a transnational link into the crimes taking place here.”

Daily Maverick has learned that several accomplices of suspects in terrorism cases being investigated in South Africa have crossed the border to join the Islamic State-linked insurgency in Mozambique.

In 2018, when police raided the house in Reservoir Hills, Durban they found a kidnapped person in the basement. Officials said that several other kidnap victims had previously been held in that house

Naidoo explained that the New Year’s Day attack which Sitole referred to was the drive-by shooting in Melville on January 1 this year. Two women were killed and six people injured at Poppy’s restaurant when the occupants of a black BMW SUV drove past and opened fire on patrons.

Jasmine Opperman, a terrorism analyst at The Armed Conflict Location & Event Data Project (ACLED), said the Kliprivier raid was being linked to the incidents in Verulam and the bombs planted there and elsewhere in KwaZulu-Natal.

“If the Islamic State links are proved, this speaks to terror financing via criminal activities. The actions of the group do not reflect an operational cell ready to execute attacks. I say again, our greatest risk is an inspired attack,” she said, referring to her earlier remarks that the real danger of Islamic State’s threat to South Africa was that it could inspire attacks by lone wolves sympathetic to the movement’s cause.

The Kliprivier arrests suggest that the threats by Islamic State against South Africa seem to have focused the attention of security authorities more sharply on IS sympathisers in the country.

Daily Maverick has learned that several accomplices of suspects in terrorism cases being investigated in South Africa have crossed the border to join the Islamic State-linked insurgency in Mozambique.

Official sources also said the removal of the Hoomer case from the court records “had landed on the minister’s desk”– suggesting the case could be reinstated.

And they said the Del Vecchio case was also receiving renewed attention. South Africans Sayfudeen Del Vecchio, 38, his wife Fatima Patel, 27, and Malawian Ahmad Mussa are charged with murder, kidnapping, robbery with aggravating circumstances and theft. The charges mainly arise from the murder of two elderly botanists, Rob and Rachel Saunders in KwaZulu-Natal in February 2018. IS material was found in Del Vecchio and Patel’s home near Mtunzini and other evidence has also been found linking them to the international terrorist group, including collaboration with IS individuals in the Netherlands and Somalia.

The case was postponed again this week in the Pietermaritzburg High Court until August 17. DM