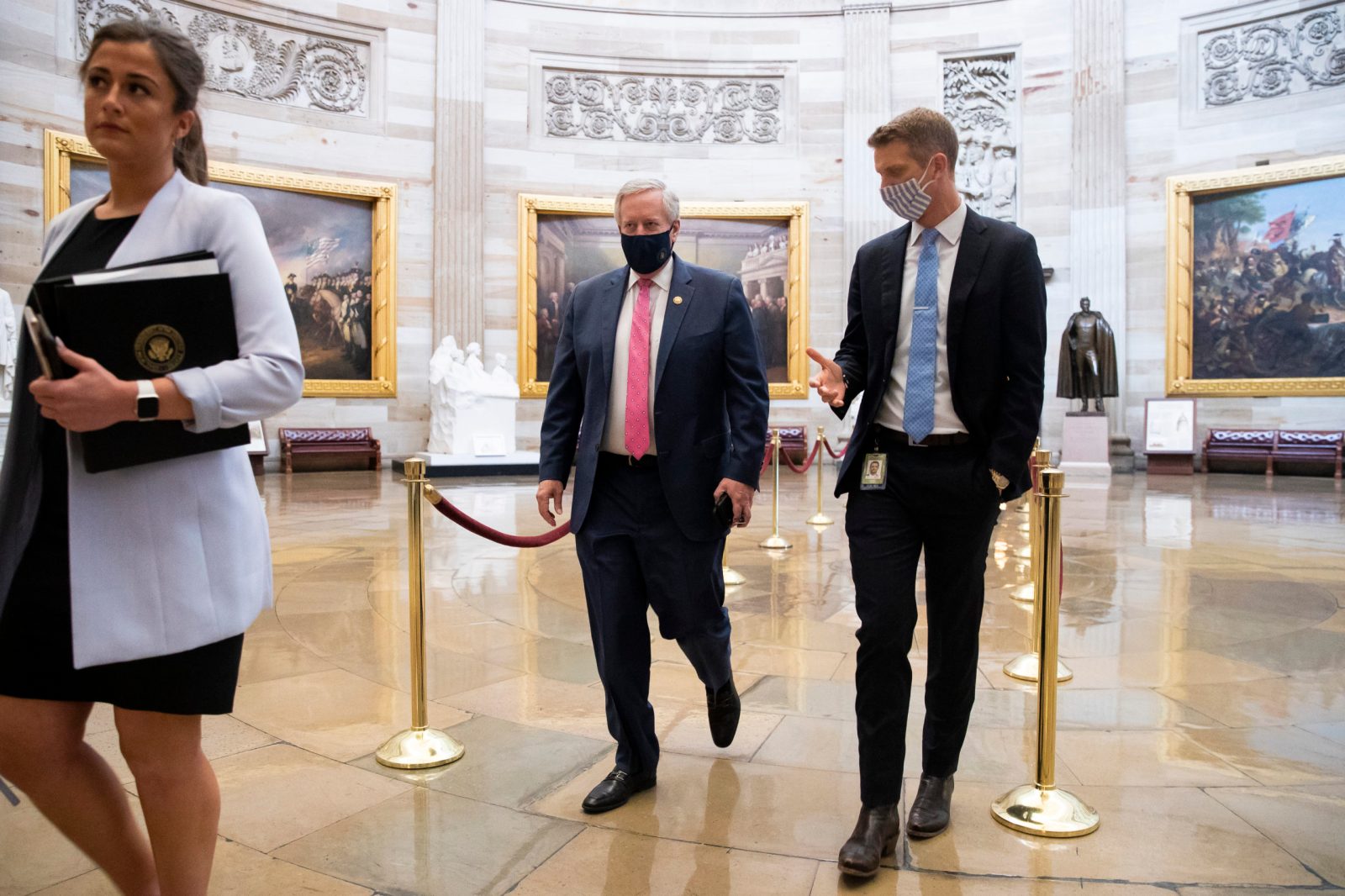 epa08559298 White House Chief of Staff Mark Meadows walks through the Capitol Rotunda before a meeting with US Speaker of the House Nancy Pelosi and Senate Minority Leader Chuck Schumer, on Capitol Hill in Washington, DC, USA, 21 July 2020. Trump administration officials such as White House Chief of Staff Mark Meadows and US Treasury Secretary Steven Mnuchin are meeting with Senate and House leadership to discuss a new stimulus package to continue mitigating the impact of the coronavirus COVID-19 pandemic. Most of the relief measures of a previous stimulus package, the CARES Act, will expire at the end of July. EPA-EFE/MICHAEL REYNOLDS

WASHINGTON, July 28 (Reuters) - Republicans in the White House and the U.S. Congress were in disarray over their own plan for providing $1 trillion in new coronavirus aid on Tuesday, as negotiations aimed at reaching a compromise bill with Democrats also sputtered.

President Donald Trump told reporters that there were aspects of the bill hammered out with fellow Republicans and unveiled on Monday that he did not like. Trump did not elaborate, but added that in the back-and-forth of negotiating, “It’s sort of semi-irrelevant.”

Republican Senate Majority Leader Mitch McConnell said he opposed “non-germane” add-ons in the plan, including a provision to fund a new FBI building that the White House had insisted upon and is not related to coronavirus aid.

The back-biting came as a $600-per-week enhanced coronavirus unemployment benefit was due to expire on Friday. The payment is on top of state jobless benefits that together help workers cope with the economic shock of the pandemic.

It was not clear whether Treasury Secretary Steven Mnuchin would be able to broker a deal with Democratic leaders in Congress by Friday to extend the federal benefit in some form.

Without providing specifics, Trump said, “We’ll do something. We’re going to take care of the people.”

Mnuchin left a late-afternoon meeting with House of Representatives Speaker Nancy Pelosi and Senate Democratic Leader Chuck Schumer telling reporters, “We have a lot of work to do.” Their meetings were expected to continue on Wednesday.

Earlier in the day, McConnell told reporters there was “zero chance” that America can get back to normal without new protections from lawsuits for businesses and schools reopening during the pandemic, provisions for which are included in the Republican bill. Democrats oppose the measures.

Pelosi later called it a “liability-on-steriods proposal” that made her wonder whether McConnell was serious about reaching a compromise.

The Republican proposal would also give many Americans direct payments of $1,200 each, provide billions in loans to small businesses and support hospitals.

Many Republicans have revolted against the $1 trillion price tag. The House passed a $3 trillion plan in May.

Republican Senator Lindsey Graham estimated that half the party’s 53 members in the Senate could oppose the plan.

Some U.S. stocks dropped as investors worried about the negotiations in Congress and the resurgence in coronavirus cases.

Many Republicans insist the expiring unemployment payout encourages Americans to stay home rather than go back to work by paying them more than their previous wages. Their proposal would provide a much-reduced weekly payment of $200 until states create a system to provide a 70% wage replacement for laid-off workers.

Democrats said $200 was not enough and would damage the economy.

“People want to work, Republican friends. They just don’t have jobs to do it. We’re not going to let them starve while that happens,” Schumer said.

Democrats also want money for state and local governments, which face multibillion-dollar budget shortfalls, with businesses closed and residents out of work.

“Our residents, our businesses, our families, they need direct federal support now,” said Savannah, Georgia, Mayor Van Johnson, one of a group of Democratic and Republican mayors on a conference call with reporters.

U.S. coronavirus cases have passed 4.3 million, with nearly 150,000 people dead and tens of millions out of work.