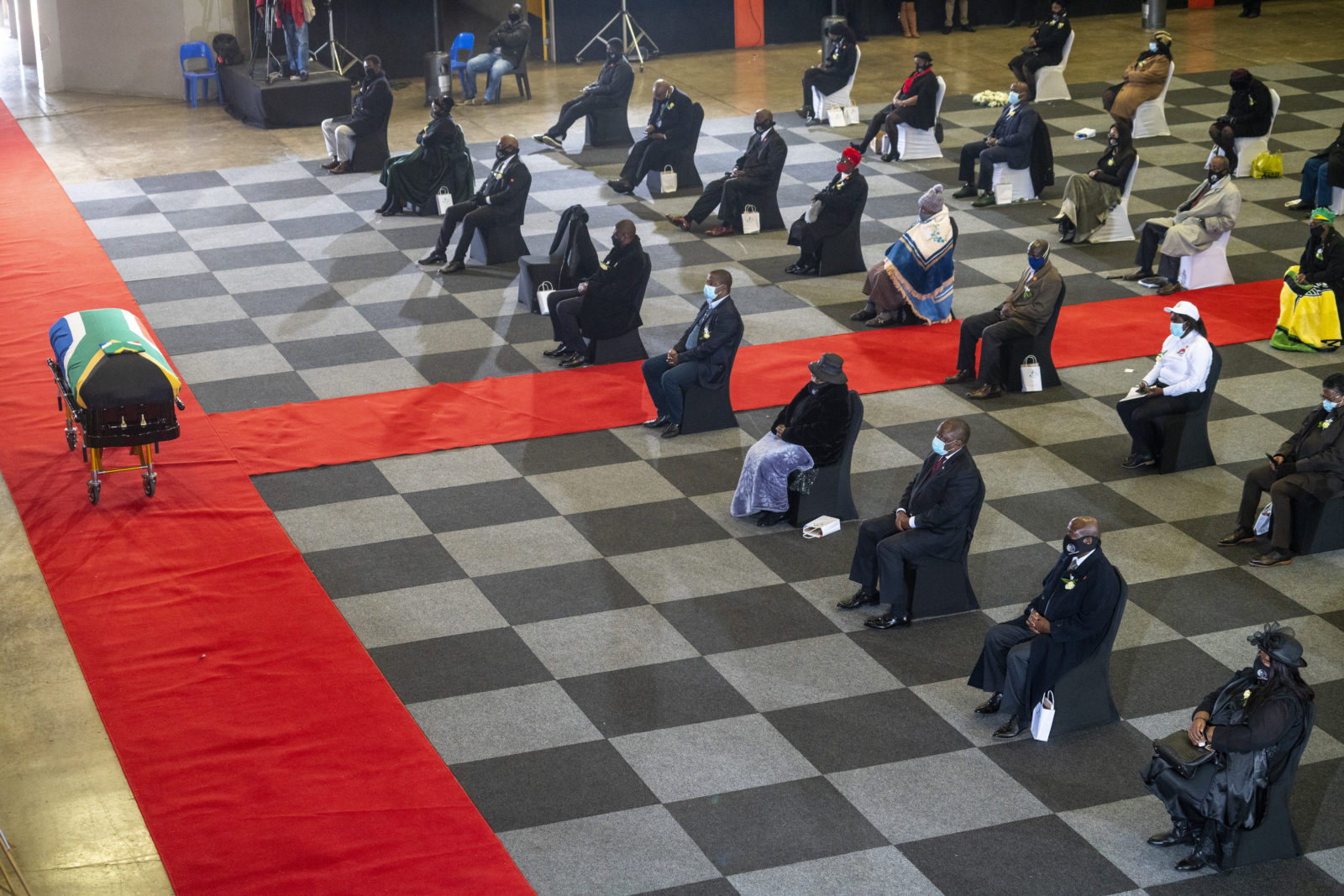 epa08571925 Mourners view the coffin of ANC stalwart Andrew Mlangeni at his funeral service in Soweto, Johannesburg, South Africa, 29 July 2020. Mlangeni died at the age of 95 last week after he was hospitalized following an abdominal complaint. Mlangen was sentenced to life in prison on Robben Island on charges of treason and sabotage on June 12, 1964, and was released in 1989 after negotiations with the apartheid government started. EPA-EFE/JEROME DELAY / POOL

An avid golfer, family man and voice against corruption, the “backroom boy” Andrew Mlangeni was laid to rest in a special official funeral service in Johannesburg on Wednesday.

In life, Andrew Mlangeni was never silent about corruption. At his funeral on Wednesday, two senior ANC members followed in his footsteps and spoke out about corruption within the ruling party.

“You saw it, tata… instead of fighting for the development of our people, we are fighting for positions,” Gauteng MEC for Education, Panyaza Lesufi, noted.

The last surviving Rivonia trialist, Mlangeni passed away on 21 July at 1 Military Hospital in Pretoria after being admitted for a stomach infection.

He was staunchly vocal against corruption and had personally asked then president Jacob Zuma to stand down as ANC and South Africa’s president as allegations of corruption swirled around him. Mlangeni had also served as chairperson of the ANC’s integrity commission.

Former president Thabo Mbeki echoed Lesufi’s lament, saying there was a loss in confidence by ANC supporters because of a laundry list of maladies in the party:

In honour of the struggle hero, he called for the renewal of the ANC, a resolution put forth at the party’s 54th national conference.

Mlangeni was bid farewell in a special official funeral service held at the University of Johannesburg’s Soweto campus. He was buried at the Roodepoort Cemetery.

Outlined in his obituary, read by Tshepo Lebepe, Mlangeni, born on 6 June 1925 in Matoding outside Bethlehem in the Free State, was one of 12 children. His parents, Matia and Aletta Mlangeni, were farm labour tenants.

He was recruited to the Young Communist League by Ruth First in 1944 and later joined the SACP full time in 1959 as its secretary for the Johannesburg region, responsible for black groups. In 1951 he formally joined the ANC Youth League, and then the ANC in 1954.

He was one of the first uMkhonto WeSizwe (MK) foot soldiers in 1961 and, later that year, was sent for military training in China. On his return in 1963, he joined an underground unit of MK and became a member of its high command.

After his arrest during a raid on Liliesleaf Farm in Rivonia, Johannesburg, Mlangeni, alongside Nelson Mandela, Walter Sisulu, Govan Mbeki and other leaders, was sentenced to life imprisonment on Robben Island during the infamous Rivonia trial in 1964. He was released in October 1989 after 26 years in jail.

Close family friend Malose Kekana shared a pertinent question he once posed to Mlangeni: “What drove you, Madiba and others to be able to sacrifice your lives for freedom,” to which Mlangeni responded, “God gives us inalienable rights when we are born, but society, due to bigotry and racism, takes away a man’s freedom, which is the essence of life as given to you by God.”

They came to a decision that there was no life worth living unless they had their freedom, said Kekana.

Two of Mlangeni’s grandchildren, Memory and Mpumi Mlangeni, only met their grandfather after he was released from prison, but said they spent ample time with him until his death.

“Papa was the best. He meant everything to all of us: his grandchildren, his great-grandchildren. He gave us time. He listened to us,” Mpumi said tearfully.

His children, Sylvia and Sello Mlangeni, described their father as a quiet and humorous man.

“There were years in which we feared we would never have the opportunity to know you as a father,” said his son. “To have you back for almost 30 years has been a blessing to us as a family.”

Sello called his father’s death “untimely”, considering he was physically and mentally well when they celebrated his birthday last month.

Ramaphosa, in his eulogy, mentioned the recent death of Mlangeni’s friend and fellow Rivonia trialist, Dennis Goldberg, on 29 April 2020.

“To lose both of them in such quick succession is indeed a blow. The great cohort to which they belonged is now in full complement in the celestial realm,” he said.

Ramaphosa also paid tribute to Mlangeni’s late wife, June, for her activism and leadership. She was instrumental in mobilising women in and around Dube, Soweto, to take part in the 1955 women’s march to downtown Johannesburg, and the famous 1956 march to the Union Buildings.

“It was mama June Mlangeni who endured police harassment and was placed under house arrest several times over the period of her husband’s imprisonment.”

Near the end of the ceremony, Mlangeni was posthumously awarded a certificate of appointment as honorary colonel of the South African Army Headquarters Unit. The SANDF also named a military unit after him. And the South African Irish Regiment in Johannesburg has been renamed the Andrew Mlangeni Regiment.

Striking a controversial note, senior SANDF officials were caught on camera smoking during Mlangeni’s burial. Questions were raised about whether they were flouting the cigarette ban by acquiring the smokes illegally. DM

Kingmaker with an eye on mayoral chain: Al Jama-ah says it won’t budge on its goals