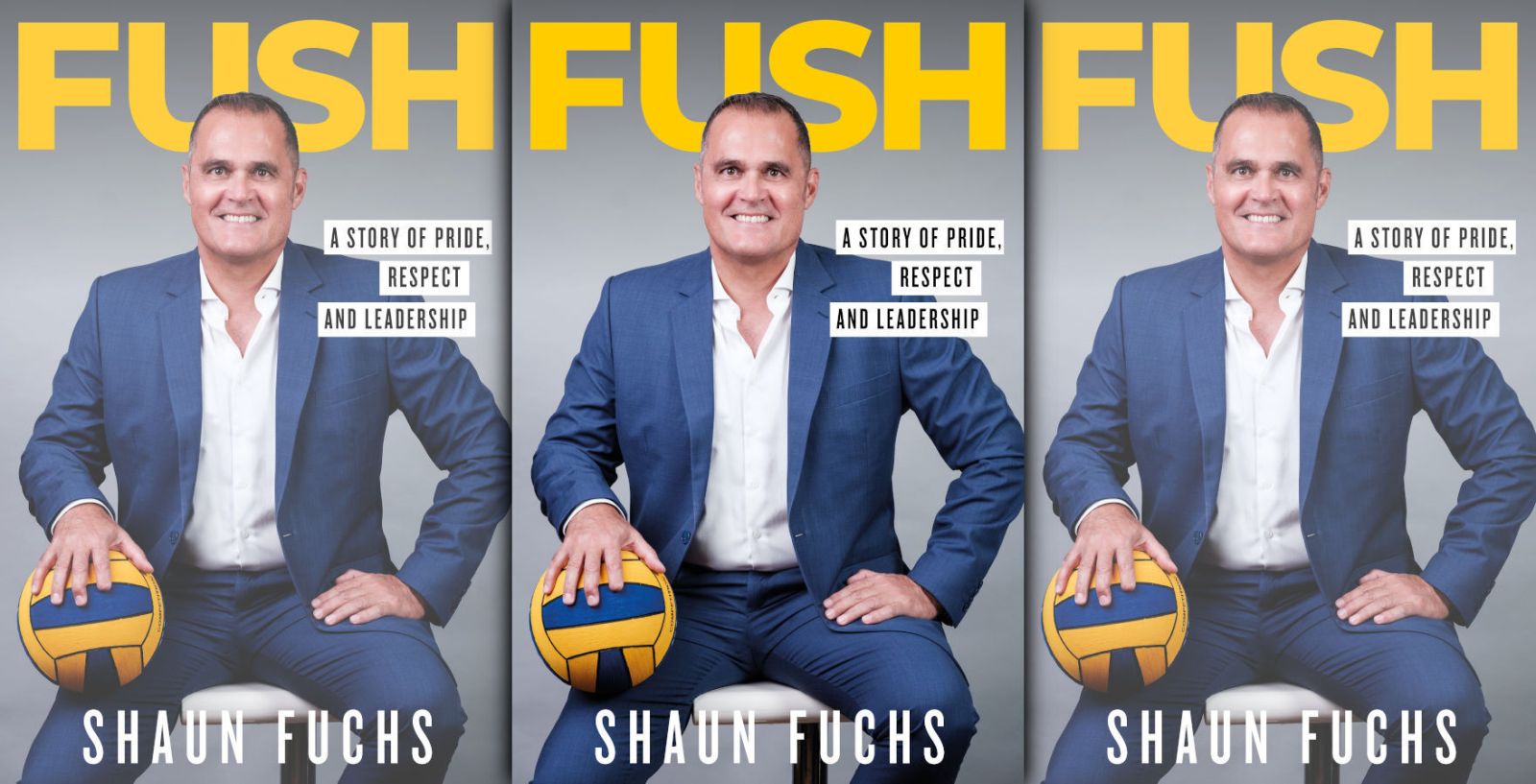 School rugby star, soldier, provincial power-lifter, renowned water-polo coach, lifelong entrepreneur, dynamic teacher, beloved headmaster… and a gay man who came of age when society was a lot more close-minded than it is today. The Reading List caught up with him to chat about his new book.

Fush: A Story of Pride, Respect and Leadership is the story of Sean Fuchs, a much-admired veteran of South African high school education who was, until recently, Managing Director of Reddam House Schools.

The Reading List: This is more than just a story about your life in education. What were you trying to achieve with your book?

Shaun Fuchs: I wanted to tell good stories. There has been so much negative media on schools recently that I felt the good, positive stories needed to be told.

TRL: You show great fondness for your old school, Jeppe High School for Boys. The teachers and sports coaches there obviously had a big impact on your life. Do you believe that school, and individual teachers, can make or break a young person?

Shaun Fuchs: Yes, absolutely! When I was still Managing Director of the various groups of schools that I headed, I would always remind the new teachers joining about the massive impact they would have on their students’ lives. I asked them to think of the one individual who had played a positive influence in their own lives. 9 out 10 times, I challenged them – if not 10 out of 10 – that individual would probably have been a teacher.

TRL: What got you into teaching in the first place?

Shaun Fuchs: I originally wanted to do law. However, my rugby coach and science teacher, David Pitcairn, who was one of those incredible positive influences, spoke to me at rugby camp in my matric year. He wanted to know what I planned on doing after school. When I mentioned law, he told me he thought I would make a great teacher – the rest is history, so to speak… and a lot of it is in the book!

TRL: Your 16 years at Crawford College Lonehill had many highlights, and you ultimately gained a reputation as an “inclusive Principal”. What does inclusivity mean to you, and was this a conscious decision when you took over?

Shaun Fuchs: Another mentor in my life, Malcolm Pike, who was the Principal I took over from, had already set the foundation for the school to be a tolerant environment, with mutual respect being a given. So when I took over it was about extending that environment and challenging some people’s beliefs that societies only function in certain ways. More than anything, I was backed by the South African Constitution! You don’t get better than that to lay out an inclusive environment.

TRL: What are the challenges of making a school diverse and inclusive?

Shaun Fuchs: Not everyone will believe that it’s the right thing to do. Often schools get caught up in traditions, which I often think hamper any form of new growth in a school.

TRL: In your formative, primary school years you were bullied as the outsider English kid in an Afrikaans school. Later, you came out while a young teacher at a time that is far less tolerant than today. How did those experiences shape your personality and your teaching career?

Shaun Fuchs: I have abhorred any form of discrimination and bullying my entire life, and of course my personal experiences will have played their part. They made me want to create environments that were free from discrimination and bullying. By making the bully the odd one out – the exception rather than the expected – they soon learn that what they are doing is wrong.

TRL: When you were deputy principal at Crawford College Lonehill, the students created a Facebook page that advocated “Mr Fuchs for Principal”. Those were the early days of social media. Today many South African principals and school boards are seemingly terrified of the next revelation to come from the “yousilenceweamplify” movement, which has brought discrimination by race, religion and sexuality at school into the spotlight. What’s your take on this?

Shaun Fuchs: It’s certainly a challenging time for many schools, and it’s a chance for the real leaders to shine. We must remember that the experiences of the individual student are their own reality. For them it’s a real issue. Too often these types of complaints have been dismissed on the basis that they don’t affect everyone, so we don’t need to highlight it or it really isn’t relevant to our greater community. But education is about the individual and always should be!

TRL: You write about your struggle as a young man to come to terms with your sexuality. At one point when entering the army you completed a form with the question, “Have you had any homosexual encounters or relationships?” You ticked “no”. Later you reflected on gay people participating in the first South African Gay pride march, in 1990, with paper bags over their heads to hide their identities. Do you see parallels between your personal struggle back then and the youth of today feeling discriminated against or “less than” because of their race, religion or sexuality?

Shaun Fuchs: Everyone has their own struggles and demons to fight. For some it’s massive and for others it’s straightforward. I don’t believe that my struggles were any different to those of today’s youth. They have challenges and obstacles today that I could never imagine dealing with as a young man coming out. What is important is that there is ALWAYS someone you can talk to and who will support you. You are NEVER alone, no matter how lonely you feel. I realised this many years later, and tried to incorporate that understanding into my teaching career from then.

TRL: Do you have practical advice for school boards and headmasters today on how to best respond to the current moment? How do they do right by young people, and at the same time how do they have conversations with parents without putting themselves instantly on the defensive?

Shaun Fuchs: Instinctively, you want to go on the defensive. Don’t do that! Listen, listen and listen again. Often, your own reality from a school perspective is very different to the experiences of the student. The damage that homophobic or racist slurs does to the individual is absolutely real for them. You cannot understand it if it has never happened to you. Now, go back to the answer of creating an inclusive environment and figure out how best to do that by incorporating all possible stakeholders – students included.

TRL: School water polo coaching has been in the news for all the wrong reasons recently. As a well-known coach yourself, what is your comment? What is it about sport in general that benefits young people?

Shaun Fuchs: I think it’s really just coincidental that there have been notable cases in this particular sport. These are isolated incidents when you compare the reach of the sport. This is about individual coaches in positions of responsibility who should never have been there and who allowed themselves to cross a very clear line. It’s such a pity that what they have done undermines water polo and sport in general. I can’t understate the power and importance of sport for young people, and you’ll see a lot of that in my book.

TRL: You’ve been a teacher, headmaster and are now in educational management and strategy. What’s the greatest lesson you’ve learnt in teaching?

Shaun Fuchs: You never get to see your end product… sadly, but also in a very positive way. I realised this after the publication of the book, when hundreds of my past students got in touch to catch up. I realised that we truly live in a global world.

TRL: Entrepreneurship comes naturally to you. You’ve run a variety of successful small businesses since your school days and you’ve stepped away from teaching to get into education strategy and management. Where do you see the future of education going?

Shaun Fuchs: Our education system is a remnant of the school system inherited from the Victorians over 200 years ago. The system prioritises assessment over learning: everything is focused on preparing for and doing well in tests. Teachers, students and schools are measured by these standards.

Education today is consumed in a lump sum format over the first 20 years of a person’s life. This is a leftover from the Industrial Revolution, when workers typically held a single job, requiring a single skill, for the duration of their careers. In a world as dynamic as ours, this model is flawed. Despite 30 years of the digital revolution, education has remained largely unchanged. But we are at an inflection point: in this decade, technology will finally bring education into the 21st Century. New start-ups will shift the focus away from testing and toward skills-based, job-relevant learning, and learning will increasingly be lifelong. DM/ ML

Fush: A Story of Pride, Respect and Leadership by Shaun Fuchs with Tudor Caradoc-Davies is published by Mercury (R320). Visit The Reading List for South African book news – including interviews! – daily.