Ghost of ex-Crime Intelligence boss lingers at commission, while the actual Richard Mdluli pleads not to be jailed 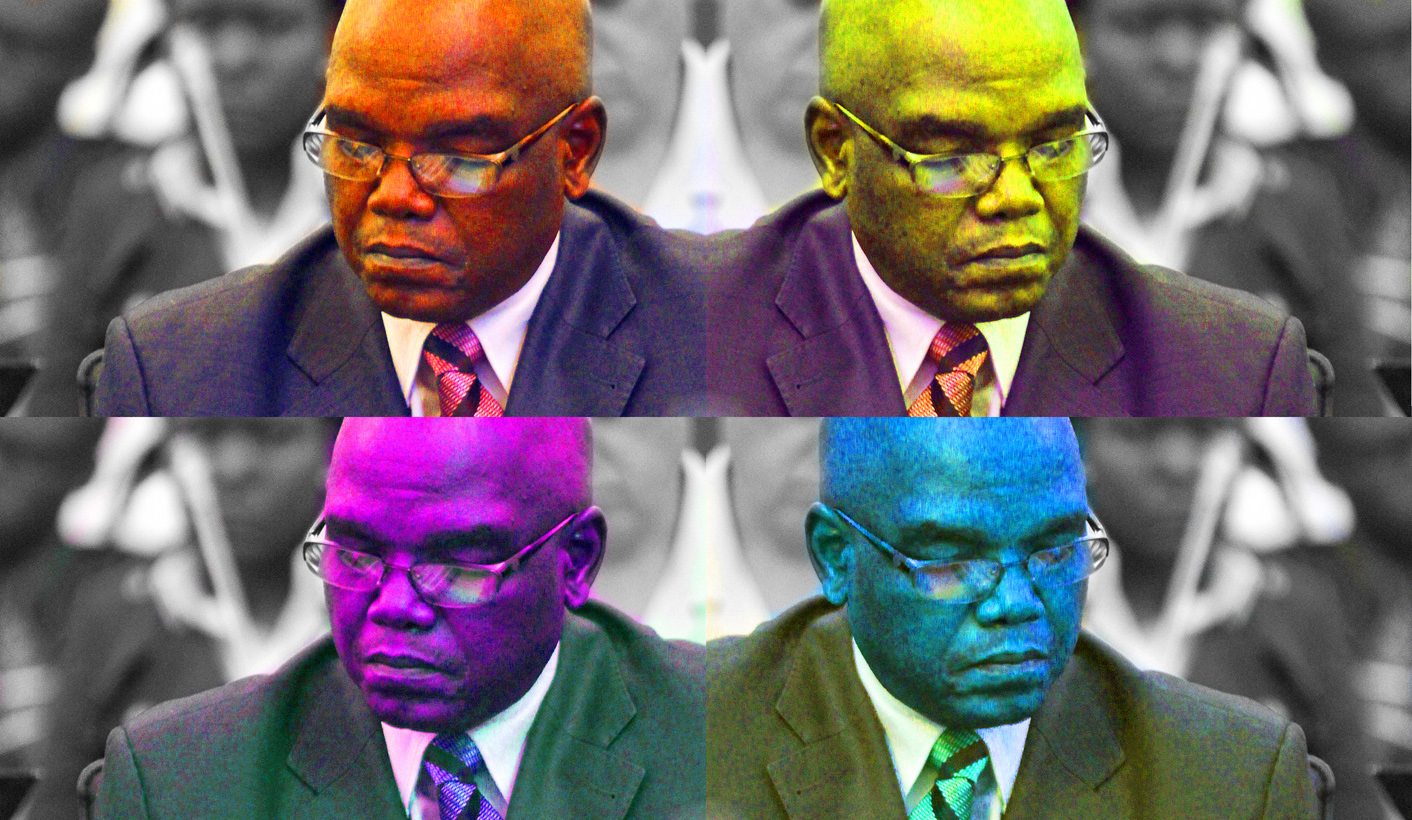 As former Police Minister Nathi Nhleko was testifying at the Zondo Commission, in the South Gauteng High Court convicted former Crime Intelligence head Richard Mdluli pleaded not to be sent to jail.

While the Ghost of Richard Mdluli Past, as the once-powerful head of Crime Intelligence, lingered at the Zondo Commission on Tuesday 28 July, the Ghost of Mdluli Present – 64 and retired – asked Judge Ratha Mokgoatlheng not to sentence him to a jail term for fear he would contract the coronavirus.

Mdluli, who earned around R8.3-million while on suspension between 2011 and 2018, was convicted with co-accused and former colleague Mthembeni Mthunzi in July 2019.

Mdluli’s lawyer, Ike Motloung, reportedly told the court that his client had been “declared unfit” and was hoping to submit a report by “an expert epidemiologist” with regard to Mdluli’s Covid-19 risk. The case was postponed to August.

Meanwhile, over at the Zondo Commission, the 2010 “Zimbabwe Rendition Matter” took centre stage for the second day as former police minister Nathi Nhleko continued to give evidence.

Nhleko has been implicated by several witnesses as having had a role in the capture and purging of the law enforcement cluster during his tenure as Jacob Zuma’s minister of police between 2014 and 2017.

The Zimbabwe Rendition, as indicated in court papers between Nhleko and former IPID head Robert McBride during the latter’s attempt to challenge his suspension, sits at the heart of a significant chapter of the State Capture project.

Dramat and Sibiya had conducted high-profile investigations, including into the upgrades to Zuma’s home at Nkandla and Mdluli’s role in the looting of the Crime Intelligence “slush fund”.

The Zimbabwe Rendition saga has sprawled and spread over the years and has been, and remains, the subject of several disparate and disputed investigations starting with Crime Intelligence, followed by the Police Civilian Secretariat, then IPID, the NPA, a special “reference group” set up by Nhleko, then IPID again, and finally a report by the private law firm Werksmans.

Along the way, what really happened at the handing over, between 2010 and 2011, of five Zimbabwean suspects linked to the murder of a Zimbabwean police inspector has come to be obscured by a thick political fog.

On Tuesday, Deputy Judge President Raymond Zondo tried to find his way through this fog as Nhleko spent hours setting out how he had relied on an original report by IPID and its recommendations to suspend Dramat.

Dramat was replaced by Nhleko with Berning Ntlemeza, an appointment later overturned by the courts.

The “first report” had been initiated by Crime Intelligence and handed over to IPID investigator Innocent Kuba, who had then been “guided” by an NPA Special Projects Unit, headed by advocate Anthony Mosing. The unit reported to the then-NDPP head, Nomgcobo Jiba.

Nhleko claimed that “key facts and evidence” had been removed or excised from the IPID report which exonerated Dramat and Sibiya and this was his objection to it.

It was in fact the Werksmans report, commissioned by Nhleko, which revealed that the original IPID report had been worked on by Crime Intelligence operative Botsotso Moukangwe (whose name was left off the report) and then handed to Kuba. At the time, Koekie Mbeki was the acting head of IPID.

Mosing’s and the NPA’s involvement in the Zimbabwe Rendition matter came to light in two reports Nhleko had attached to his affidavit in the McBride suspension matter.

As amaBhungane reported in May 2015, the reports, one dated February 13 2014 and marked “Project X – final”, were addressed to Jiba and South Gauteng prosecutions chief Andrew Chauke.

Nhleko told Zondo on Tuesday that he had relied on Kuba’s 22 January report as it had found its way to the NPA and that enough evidence existed for him to make the decision to suspend Dramat.

“It is not just any other report. It is a report by a chief investigator who then signs it off, hands it to NPA to investigate,” he said.

Another report, dated 18 March 2014, and completed after McBride had returned to his position at IPID  had exonerated Dramat and Sibiya.

McBride had told the Zondo Commission that the January 22 report had been incomplete and further evidence about cellphone movements had to be added.

Nhleko claimed that “key facts and evidence” had been removed or excised from the IPID report which exonerated Dramat and Sibiya and this was his objection to it.

He insisted that the first report had been a final one and that he had made his decision in this regard after much consultation and consideration.

“There is no provision by law or by convention that you would then have a so-called second report which nullifies the first report.”

The report of 18 March, said Nhleko, had “plucked out material evidence with the view to influence the recommendations at the end”. He added that the NPA “did not know anything about the second report, if indeed the second report was a valid one, as has been claimed”.

Zondo then pointed out to Nhleko that the original police docket containing all statements had been attached to both the first and the second IPID reports and so, in essence, nothing had been excised from the 18 March report that could not be cross-checked with evidence in the docket and the first report.

With regard to reporting lines and his calling for the Zimbabwe Rendition docket and IPID report, Nhleko said it was his understanding that the executive director of IPID reported directly to the minister.

“It allows him [the minister] to ask for any information,” he told Zondo.

Garth Hulley, evidence leader for the commission, said that Section 7.12 of the IPID act did not require the directorate “to hand over a docket to the minister or Parliament” but allowed for the executive director to report on “activities” of IPID.

Zondo several times on Tuesday said he had been keen to “get to the meat” of the nature of the alterations to the report and various other factual matters but with little success.

Where IPID did hand over dockets to the NPA for prosecution, said Hulley, it merely had to inform the minister of this.

With regard to IPID investigator Innocent Kuba’s testimony to the commission that Ntlemeza had visited him in Limpopo and had informed him on 6 December 2014 that there would soon be a “hit on Dramat” and that he should watch television, Nhleko said he knew nothing.

This indeed turned out to be the case when Nhleko suspended Dramat on 23 December 2014 and replaced him with Ntlemeza.

Asked whether he had discussed the matter with Ntlemeza prior to his appointment to head the Hawks, Nhleko said that the only person he had spoken to was “the head of state”, the then-president, Jacob Zuma.

Zondo several times on Tuesday said he had been keen to “get to the meat” of the nature of the alterations to the report and various other factual matters but with little success.

“If you can maybe just answer ‘yes’ or ‘no’ ”, “we would make better progress if you answer the question”, “can we get to what the alterations were” and “let’s get to the real issues,” Zondo repeated on several occasions on Tuesday.

Nhleko will give further evidence on Wednesday 29 July.

Meanwhile, law enforcement agencies can now request or call for any information obtained by Zondo Commission investigators thanks to an amendment to commission regulations signed by President Cyril Rampahosa on Tuesday.

This will bolster the work of NPA investigators and prosecutors and hopefully hasten prosecutions. DM