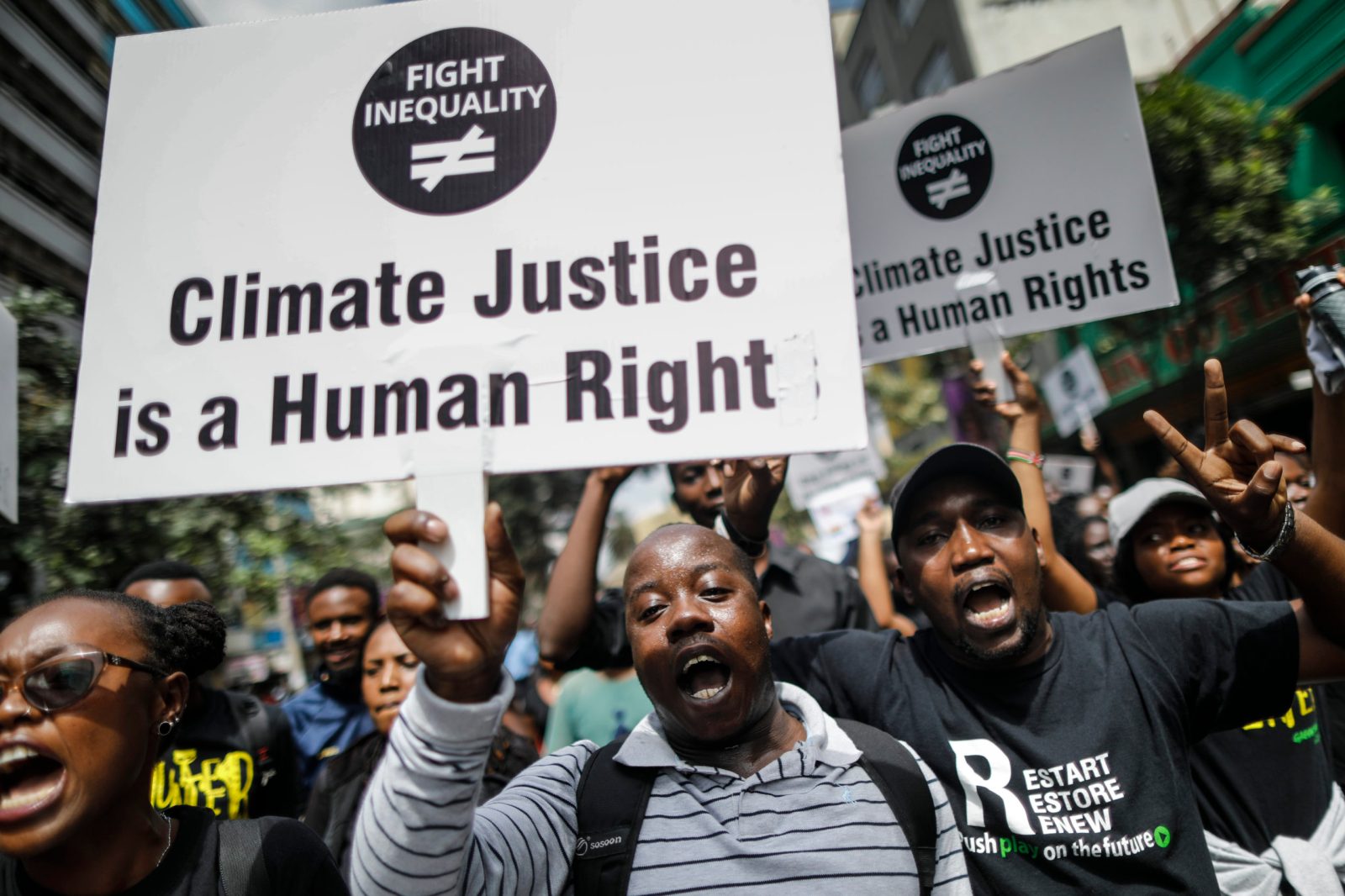 epa08135396 Activists hold up anti-climate change placards and shout slogans as they protest against inequality in Nairobi, Kenya, 17 January 2020. A global campgainers with a hashtag #FightInequality are holding protest rallies around the globe against climate change, low wages, political reporession and 'wealth and power captured by a small elite' to coincide with the World Economic Forum taking place in Davos on 21-24 January 2020. EPA-EFE/DAI KUROKAWA

NEW YORK, July 27 (Thomson Reuters Foundation) - The head of the United Nations said on Monday he will start meeting regularly with young climate activists, saying participation by youth on the frontlines is critical to scaling up action to slow global warming.

A group of seven people, ages 18 to 28, from seven countries will sit down with U.S. Secretary-General Antonio Guterres to advise him on global warming issues, he said in a video on Twitter.

“We have seen young people on the front lines of climate action, showing us what bold leadership looks like,” Guterres said in a video on Twitter.

The youth advisory group is tasked with providing “perspectives, ideas and solutions that will help us scale up climate action,” he said.

“We are in a climate emergency. We do not have the luxury of time,” he added.

The announcement marked an acknowledgement of the role young people have been playing in combating climate change as they look to their future.

The one-day summit at the U.N. drew more than 1,000 young climate campaigners from more than 120 countries.

Guterres, who has made climate change his signature issue since taking office in 2017, said recently that governments should consider the issue when designing economic stimulus responses to the coronavirus pandemic.

“Where taxpayers’ money is used to rescue businesses, it needs to be tied to achieving green jobs and sustainable growth,” Guterres said on Earth Day in April.

Unable to gather due to coronavirus restrictions, young activists from about 20 countries recently took to YouTube in a 24-hour broadcast to share ideas on how to fight global warming.

Previously they were skipping classes, marching through cities and holding vigils outside government buildings in regular Friday protests.

She was not among those named to the advisory group, which included Nisreen Elsaim, a Sudanese climate activist; Ernest Gibson of Fiji; Vladislav Kaim, an economist from Moldova; Sophia Kianni, an American who founded a nonprofit to translate climate information into more than 100 languages; Nathan Metenier of France; Paloma Costa, a Brazilian lawyer; and Archana Soreng of India. (Reporting by Matthew Lavietes, Editing by Ellen Wulfhorst; Please credit the Thomson Reuters Foundation, the charitable arm of Thomson Reuters, that covers the lives of people around the world who struggle to live freely or fairly. Visit http://news.trust.org)