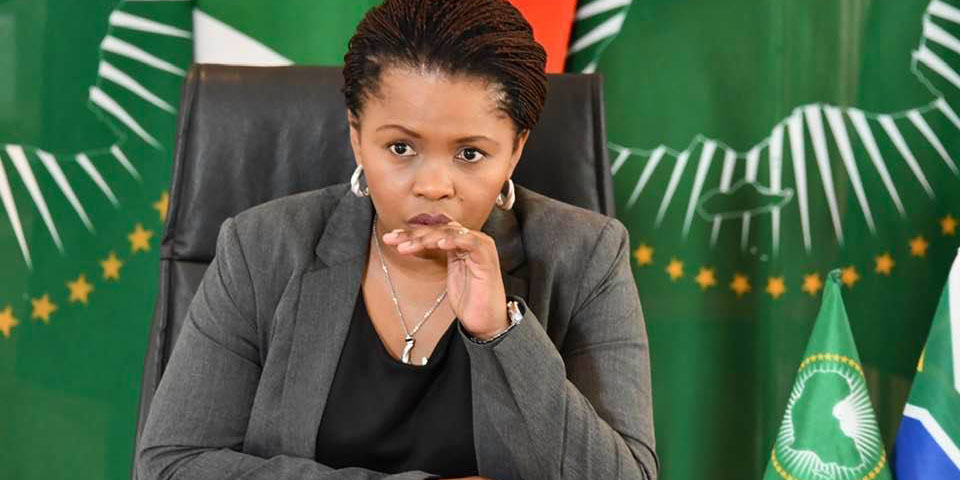 President Cyril Ramaphosa’s spokesperson Khusela Diko has taken leave until a probe into Covid-19 contracts is over.

Daily Maverick has amended this story to remove references to Thandiswayo Diko receiving a royal state allowance. This is to take account of the amaBhaca leader ’s statement  (see full statement released on 29 July below) that he does not receive a royal state allowance. Daily Maverick attempted to confirm the allowance with Khusela Diko, the Department of Traditional Affairs and the National House of all Traditional Leaders before publishing. All requests were received but not responded to.

amaBhaca king Thandisizwe Diko, who is the husband of presidential spokesperson Khusela Diko, receives a princely state allowance, but still sought Covid-19 contracts worth over R47-million.

Now Diko is on leave until a probe into the contracts has been finalised.

The contracts are among 90 Gauteng government tenders being investigated by a nine-institution unit headed by the Special Investigating Unit (SIU). This was announced by President Cyril Ramaphosa on Thursday July 24.

Diko took leave from the Presidency on Monday pending the conclusion of the probe – the contracts were first exposed by the Sunday Independent.

Her husband, the king, receives an annual allowance of almost R1.3-million, according to the latest report of the Independent Commission for the Remuneration of Public Office Bearers, released in February. This allowance is paid to all royals and traditional leaders to give them space and time to take care of their people.

But by March, the king had applied for and received commitments to supply medical goods worth over R47.5-million from the Gauteng government, according to data seen by the Daily Maverick. This included N95 masks, sanitiser, overalls, visors, goggles, biohazard healthcare waste (disposal) and biohazard disposal bags.

According to a database of Gauteng Covid-19 contracts, the deals were granted and then cancelled. Diko explained last week that she and her husband thought better of accepting the contracts because of her role in the Presidency. The contracts appear to have been cancelled ahead of being fulfilled and paid, but the SIU investigation will determine whether this is correct.

While close to Diko, who is a confidante and his public representative, Ramaphosa is distancing himself from Covid-19 corruption. Cronyism, which is the favouring of politically connected individuals in state contracts, is regarded as a subset of corruption. Addressing the country last week, Ramaphosa said:

“What concerns me, and what concerns all South Africans, are those instances where funds are stolen, where they are misused, where goods are overpriced, where food parcels are diverted from needy households – where there is corruption and mismanagement of public funds.

“Increasingly, we are hearing allegations about fraudulent UIF claims, overpricing of goods and services, violation of emergency procurement regulations, collusion between officials and service providers, abuse of food parcel distribution and the creation of fake non-profit organisations to access relief funding.”

Diko is also close to Gauteng Health MEC Bandile Masuku, and along with his wife, Loyiso Lugayeni-Masuku, the three were summoned to appear before the ANC Gauteng provincial executive, also on Monday, to explain themselves.

Gauteng premier and ANC provincial boss David Makhura wants to put a marathon distance between his provincial administration of health and scandals like the Life Esidimeni and others which beset the health department in the province. (For an account, read Judge Dikgang Moseneke’s arbitration award to the families of those who died through maladministration in that department.)

Masuku has denied wrongdoing. In a statement, his spokesperson Kwara Kekana said that it was, in fact, Masuku who had raised red flags about procurement.

“In April 2020 MEC for Health in Gauteng, Dr Bandile Masuku made a request to the Gauteng Audit Services (GAS), to conduct an audit into COVID-19 procurement and donations. As a result of some red flags raised. MEC Masuku requested the Premier to institute a forensic investigation into COVID-19 procurement. The Premier subsequently requested the SIU in May to investigate the matter.

“As part of risk management, the Gauteng Provincial Treasury, through the Gauteng Audit Services, undertakes regular internal audit and review of major procurement processes of PPE, food and related infrastructure in order to ensure that clean governance is adhered to. Where issues need further probing they are escalated to relevant law enforcement authorities.”

Covid-19 corruption is becoming a growing political risk for Ramaphosa as news reports suggest the entire value chain of state procurement, from food to protective health equipment and other goods and services, is being compromised by overpricing, cronyism and other forms of tender shenanigans.

Diko did not respond to requests for comment. DM

Over the last week, as individuals, a couple and a family, we have found ourselves at the centre of a media and public storm over a Gauteng Health Department Personal Protective Equipment (PPE) supply contract that was awarded to Royal Bhaca Projects and subsequently cancelled.

Despite the absence of any illegality and confirmation that no public funds were ever paid to Royal Bhaca Projects – details of which will be further ventilated by the investigations – the matter continues to draw outrage from across society.

iNdlovukazi Khusela Diko – unprompted and of her own volition – sought a leave of absence from the Presidency in respect of the office she served, to allow the work of the President to proceed unhindered, pending the finalisation of the relevant probes.

We acknowledge with humility the anger and outrage expressed by South Africans. For more than a decade, South Africa has suffered due to state capture. As the evidence presented to the Zondo Commission on State Capture has shown, there is a correlation between political office and influence, and private enterprise that unlawfully benefits from State coffers. Corruption has undermined the capacity of the State to deliver essential services and has stolen from the poor. It is, therefore, vital that the media and the public remain diligent in the fight against corruption, which we wholly support.

Although there was no corruption in the bidding and subsequent awarding of the PPE contract to Royal Bhaca Projects, we accept that years of cronyism have created an environment of mistrust and suspicion when individuals, who are close to political office and influence, are seen to be benefiting from the State in ways that may be unethical.

We have attempted to rectify this matter by seeking to cancel the contract, and we deeply regret the error of judgement that led Royal Bhaca to seek to do business with this Department in the first place.

We support the measures that government has put in place to investigate and prosecute all instances of the misuse of funds related to the response to COVID-19.

RELATIONSHIP WITH THE MASUKU FAMILY

The ties between the Diko and Masuku families predate the public office positions that are occupied by the respective members of both families. We have never hidden the relationship, as evidenced by various social media posts that have been referenced by the media. These family ties have been based on mutual respect and values that we uphold.

Over the years, prior to any of us acceding to public office and positions, some members of our families contemplated several business partnerships due to our strong bonds and aspirations in various endeavours including agriculture and community healthcare amongst others. However, those plans never materialised. Residual evidence of entities that were registered for such a purpose show that no trade was ever undertaken through those companies.

In the current atmosphere, we accept that such a history between our families will raise suspicion and concern. We reiterate and emphasise that at no point did we discuss the extension of our family ties to benefits that will accrue from public sector procurement.

Until recently, I was the Chief Executive Officer of Alfred Nzo Development Agency (ANDA), an entity of the Alfred Nzo District Municipality in the Eastern Cape. Prior to that, I served on the Board as Deputy Chairperson. I have also served as Board member of Ingwe TVET College amongst other positions I have held. I have a Master’s degree in Development Communication from the University of Pretoria and a Certificate in Municipal Finance from Wits University.

I have more than 19 years of work experience, of which over ten have been in senior management at different institutions including national government.

I believe that this experience I have developed as well as the knowledge and skills I have accumulated were considered valuable in my appointment to the Board of Sentech. Sentech is mandated to distribute communications infrastructure to provide access to communication services in all areas, including the furthest and most remote places in South Africa. These are the communities that I serve.

Similarly, CATHSSETA facilitates skills development in culture, arts, tourism and sports – areas which should be the bedrock of development in South Africa’s impoverished areas. I adhered to the application processes for consideration for appointment to these boards, and I believe I have the requisite skills to provide valuable counsel and guidance.

The above considerations were also the reasons I applied to be a member of the Board of City of Joburg entities, specifically the Joburg Market, as I had the hope that those skills could assist me in delivering a more developmental approach to indigenous leadership. It has always been my desire to represent and contribute to the perspective of rural communities to the organisations I have had the privilege of serving.

I fully reject the assertion that these appointments, which I earned after due process, were the result of unwarranted political influence.

However, in the interests of ethical leadership and accountability and following the example set by iNdlovukazi Khusela Diko, I will resign as an Independent Audit Committee member of the Joburg Market as this appointment itself has now become mired in controversy. This is to save the Market and the City from any further undue public scrutiny.

The question has been raised why I have pursued private business when I receive an allowance from the State. This is a misconception which I must correct. I do NOT receive any allowance from the State. That is why I have endeavoured to attain entrepreneurial experience and engage in business enterprises that will benefit my family and the community I serve, which remains largely poor and socially- and economically marginalised.

I deeply regret that these efforts to earn an honest living and improve the wellbeing of my people are now mired in controversy, having not achieved its core objective. I am firmly focused on successfully leading amaBhaca and rewarding their trust in my leadership.