This weekend we’re watching: The highlife in reduced...

This weekend we’re watching: The highlife in reduced circumstances 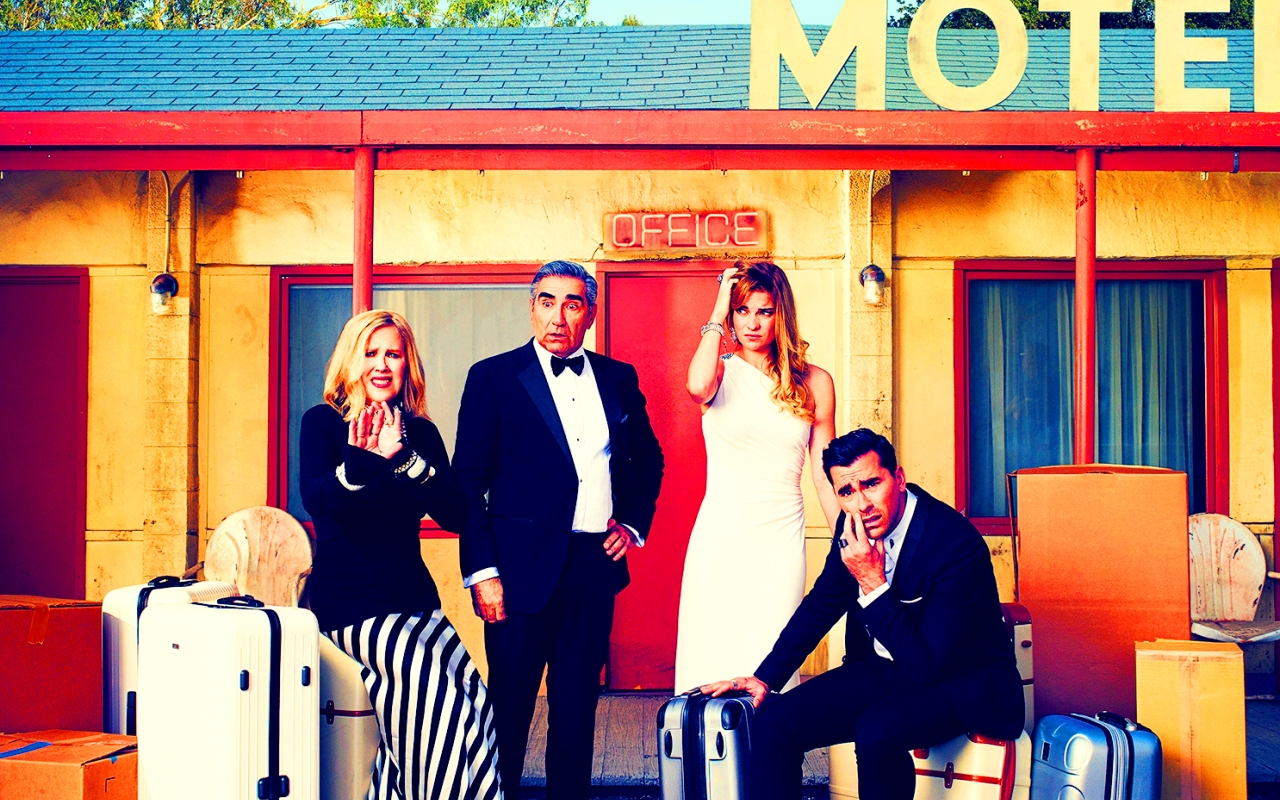 Be ready to float lazily down ‘Schitt’s Creek’ on a sunny afternoon, stifling sniggers at the humbling of the greedy, and be humbled by the harsh reality of ‘The Pursuit of Happiness’.

“Save me, save me, save me from this squeeze
I gotta big fat mama trying to break me
And I love to live so pleasantly
Live this life of luxury
Lazing on a sunny afternoon”

Ray Davies wrote the lyrics to Sunny Afternoon when he was feeling miserable and sick. The band was going through a difficult time, but they were simultaneously shooting towards stardom, so Davies was feeling both sorry for himself and appalled at his being so down in the midst of wealth and fame. “The only way I could interpret how I felt was through a dusty, fallen aristocrat who had come from old money as opposed to the wealth I had created for myself”, he said.

Davies never intended listeners to sympathise with this “scoundrel”, as Davies referred to him, grumbling about not being able to sail his yacht. He is not so different from Veruca Salt in Roald Dahl’s Charlie and the Chocolate Factory, stomping and shouting, “I want another pony”.

Veruca Salt and the dusty aristocrat in the song can be seen all over the place right now. The coronavirus has put a strain on everyone, even the rich, and that pressure has laid bare hypocrisies and selfishness. “I want my Cabernet Sauvignon!” screams Veruca Salt. “Never mind sail my yacht, now I’m not even allowed to drive past 9pm!” protests the dusty aristocrat.

When we are under stress, it is often that our true colours shine through; 2020 has been nothing if not stressful, so we’ve learned a lot about ourselves, our friends and the people of our country, and sometimes it hurts. Discovering that your friend you thought was empathetic isn’t willing to wear a mask in public, or is willing to protest the cigarette ban despite having appeared unfazed by the continual brutalising of black and female bodies – are harsh and sobering realities we have to face and deal with.

This weekend we’re stifling our sniggers at the humbling of the greedy, and being humbled ourselves …

Everybody knows the phrase “don’t judge a book by its cover” but people do it anyway, sometimes without even realising it. Critics have speculated that the public’s initial lacklustre response to the sleeper hit series Schitt’s Creek when it was released in 2015 was due partly to little more than its ill-advised name. A toilet humour pun as a title doesn’t exactly inspire confidence in the quality of the humour. The name is actually an in-joke about the crude and excessive protagonists, one of whom bought an entire town for his son as a joke because of its very name.

The Roses are a family of ultra-rich ignorant douchebag elites. They were conceived when Dan Levy, the creator of the show, caught himself wondering what would happen if normal human lifestyle and experience were forced upon families like The Kardashians or the “Fucking Fulfords” (a vulgar family in the UK who have been filthy rich since the time of Richard the 1st and star in several reality TV series including the hilarious BBC docuseries Life is Toff which can be found on Dailymotion). Within the first two minutes of the first episode, the Roses have lost everything. Well, almost everything. All they have left is Schitt’s Creek.

One might expect that a riches-to-rags comedy about a snobby American family forced to live in a dingy motel in a backwater town would offer some naughty schadenfreude for the better part of its first season before going stale. Schitt’s Creek keeps it up for far longer, and this consistency saw its popularity steadily increase. The character development is slow, but as the seasons move on, the snappy putdowns and entitled madness is punctuated more often by moments of kindness and growth. By the 6th and final season which was concluded in April of 2020, things can get pretty happy-go-lucky.

The obvious theme of redemption for the rich and greedy is an inevitable concession to mainstream American entertainment tastebuds. A more convincing theme is that of the distorted perspectives of Kardashians and their contemporaries – self-obsessed sheltered elites. “You are blind to reality and of that I am most proud,” says maladjusted matriarch Moira Rose to her vile bickering adult children.

Watching the Roses and knowing that such nasty entitled people exist makes one feel like the world is sick in more ways than one. You don’t have to be a Marxist or a millennial anarchist with a placard that reads “eat the rich” to consider that the world might not need billionaires. While we shan’t likely be rid of the Roses, the Kardashians, the Zumas and their ilk any time soon, we can certainly rid ourselves of the aspects of their attitudes which creep into the people around us, by checking our privileged and oblivious behaviours.

The pandemic is painful to many, but for some of us it is a lot more. Rock bottom for the majority of people does not look the way it does for the Roses. There are an abundance of films and series that better show the kinds of hardship normal people are experiencing worldwide due to the loss of their jobs to Covid restrictions.

Like the painfully touching classic The Pursuit of Happiness.

The Pursuit of Happiness is an inspiring, heartbreaking true story of a loving father’s determined struggle to find work and care for his young (adorable) son. One of Will Smith’s most convincing performances, and, some might say, the only convincing performance of his son Jaden, the film was nominated for an academy award and two golden globes. It’s a timeless story, relevant to many, told with emotional sincerity and compassion. The Pursuit of Happiness was recently added to the Showmax collection.

Schitt’s Creek is available on Netflix.

We’ve written about wealth inequality before on This Weekend We’re Watching in our review of Trash. Missed it? You can find it here: https://bit.ly/TWWW_Trash