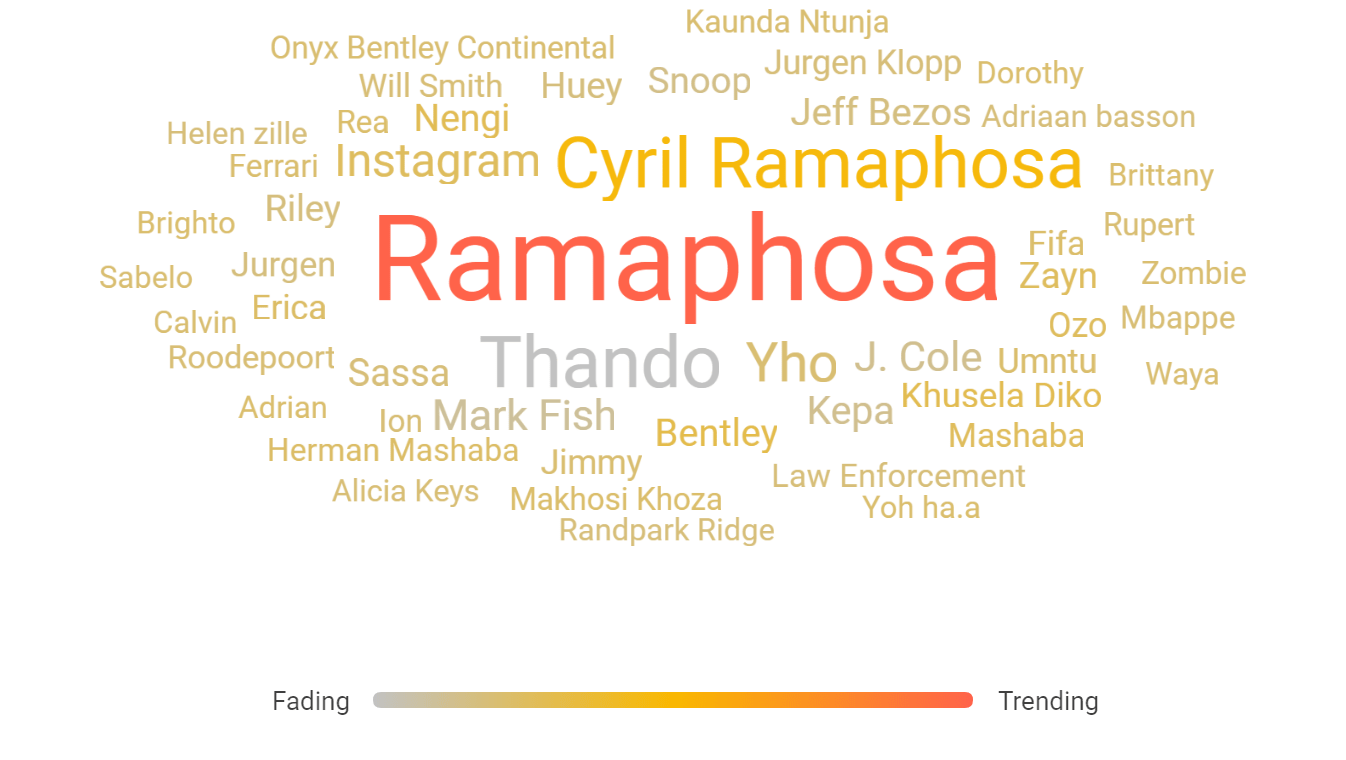 This is a summary of the trending, highest impact, and most active themes and their narratives related to social cohesion and division in South African public-domain social media conversations on 23 July 2020

The top three topics on Thursday were “Cyril Ramaphosa”, “R500-billion” and “Mr President”. Discussions about the government’s R500-billion Covid-19 relief fund, which has allegedly already been depleted, dominated Twitter. The conversation spiked after President Ramaphosa’s address to the nation on Thursday evening.

Early in the day, @patson_m tweeted: “There’s corruption, and then there’s finishing R500 Billion in just 4 months.” While it is unclear what information he was reacting to when the tweet was created, the post received more than 8,000 likes and was retweeted more than 3,000 times by early Friday morning. The tweet created much conversation on the topic of maladministration by the government, with Twitter users quick to comment about their dissatisfaction with the country’s leadership.

Between 20:00 and 22:00, many tweeted about the R500-billion Covid-19 relief fund, as Ramaphosa addressed the issue of corruption during his national address.

At 20:23, @sine_nzama tweeted that the speedy depletion of R500-billion happens while people are dying and starving and while electricity is cut “whenever they feel like it”. He concluded that the depletion of the relief fund in just three months should be considered a crime against humanity. This post was retweeted more than 1,100 times and received close to 2,000 likes.

Commenting with a screenshot of a list of organisations with a rand value next to each, @MarotholiSuzan claims that the companies listed were the recipients of the relief fund. They also explain that “some of these companies registered in 2019/2020, if this is not corruption then I don’t know what is”.

While the address was still underway, the EFF’s @FloydShivambu tweeted: “There is no R500 billion relief package!” His tweet received close to 3,000 likes and has been retweeted more than 600 times. @Iyaz_Kanzi responded to Shivambu with an image of a woman laughing, saying, “Next thing you gonna hear is that the cooking pots are missing, then they will hire investigating team to find the pots,” making light of the president’s announcement that a team will be deployed to investigate corruption related to Covid-19 relief funding.

At 21:16, @AdvoBarryRoux tweeted that he agreed with Mbuyiseni Ndlozi of the EFF, and that investigations should start with presidency spokesperson Khusela Diko’s husband, who allegedly benefitted from PPE tenders. His post received more than 600 likes by Friday morning.

From early Friday, South Africans tweeted their discontent with the ruling party. At 05:57, @AwkwardTad tweeted that he had lost everything, from his business to his house, as a result of government-imposed lockdown measures. He ended his tweet with, “Fuck the ANC.” His post received more than 2,000 likes and was retweeted close to 800 times.

Then, at 06:37, @Diegochuene tweeted images of people with signs saying things like, “#Jobssaveslives” and “#alljobsareessential”. The post received more than 2,000 likes and was retweeted around 1,200 times.

Continuing on the topic of #jobssaveslives, @Leon_Schreib tweeted that the people of South Africa are literally begging to be allowed to work. He emphasised that they are not asking for handouts; just an opportunity to make a living. His post has been retweeted close to 150 times and has received more than 400 likes.

Twitter users directed tweets at Ramaphosa, criticising the proclamations made during his address to the nation and blaming him for the country’s current dire economic situation. 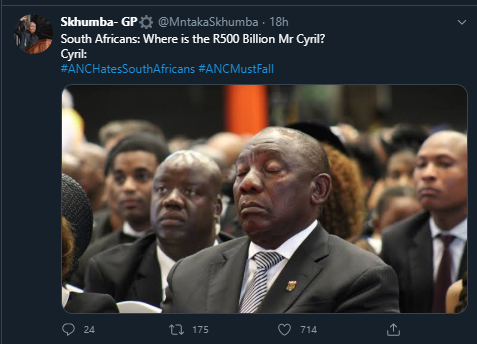 @HermanMashaba called on Ramaphosa to “be a PRESIDENT” and to “put South Africa and South Africans first” by taking action against looters of the relief fund. His tweet was liked and retweeted over 2,500 times.

@Eusebius responded to the president’s assertion that he would root out corruption, stating, “Your government has a piss poor record on fighting corruption.” The tweet was liked over 3,600 times and retweeted almost 1,000 times.

@samkelemaseko accused the president of perpetuating the betrayal of the promise to reduce inequality in a tweet that was liked and retweeted almost 500 times.

@FloydShivambu of the EFF tweeted that South Africans needed to realise and accept that Ramaphosa’s role was to protect white interests. His tweet was retweeted over 450 times and received over 1,600 likes. Another prominent EFF member, @MbuyiseniNdlozi, said South Africans cannot trust a billionaire president who could have dealings with those who are looting the relief fund. While his tweet was liked over 3,400 times and received over 850 retweets, it was also met with opposition.

@TomiRikhotso poked fun at Ndlozi’s default opposition to anything the president says or does, when he tweeted:“Ramaphosa: It’s Thursday. Ndlozi: No it’s not Thursday, it’s the day before Friday.  #cyrilramaphosa.”

Similarly, @robzinterris tweeted:“Dr Ndlozi is like that guy at the stadium who blows the Vuvuzela close to your ears… #cyrilramaphosa.” Each of these posts received approximately 800 likes and retweets.

While many Twitter users blamed the government, and the president in particular, for the current difficulties being faced as a result of the pandemic and lockdown, others placed the responsibility on citizens.

@AdvoBarryRoux tweeted:“We have two problems in South Africa. The first problem is the ANC. The second problem are ANC voters. Our country would be so great if we can fix these two problems.” This was liked almost 5,000 times and retweeted over 1,100 times. 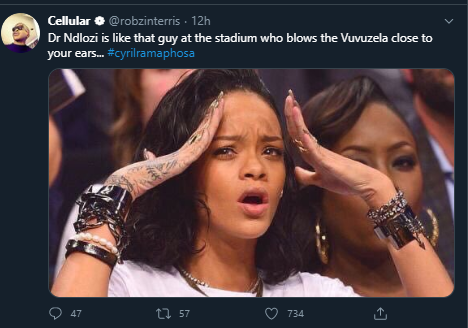 @SneKhumaloSA implored South Africans to not be complacent about the depletion of the Covid-19 relief fund, in a tweet that sought to emphasise the magnitude of the problem: “I honestly don’t think most South Africans understand just how much money is R500 Billion. That’s like half a trillion rands. That the ANC blew in just +120 days. Half a trillion rands guys..” The tweet received over 1,000 likes and over 360 retweets.

SaVee TheSwartz shared a post about Noluthando Pearl Mlambo who has been missing for a few days: “Day 3. We won’t stop. Pensive facePensive face Please rt and help us find Thando. Last seen on the 21st in Newlands West in Durban. We won’t stop Thando, we pray for your safety. Broken heartBroken heart Please rt and share as much as possible. Please guys. #RamaphosaResigns #Tshegofatsopule #WearAMask.” The tweet received over 2,800 retweets and 1,000 likes.

Several Twitter users shared posts concerning Lilitha Ndungane, a 15-year-old girl who has been missing since 15 July. On 21 July, her mother @Ncumisa N posted: “My daughter is missing, I was the last person to see her, she left our home in Parklands saying she’s taking a walk and will return home, this was Wednesday the 15th of July, please help my family to bring her back home unharmed & alive. 2nd frame is the hoodie she is wearing.” The tweet received over 23,000 retweets and 7,600 likes.

@Boipelomoagi tweeted a missing person post about Qaqamba Mphalala, a 15-year-old boy: “Hey guys my friend’s brother has gone missing please help us get him back home!” The tweet received 2,500 retweets and 483 likes. DM