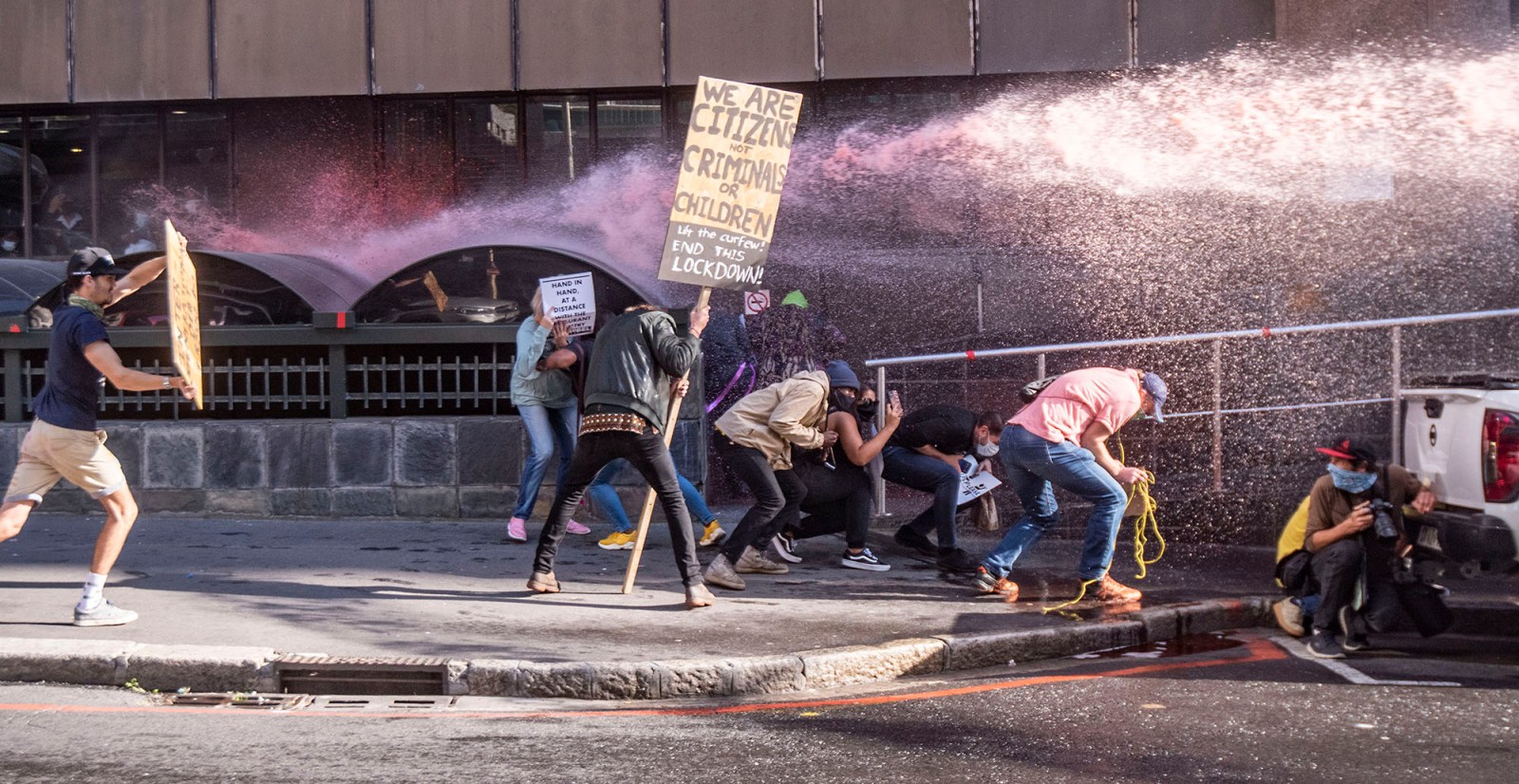 A police water canon with red dye is used against protestors in Plein street after they moved away from parliament. (Photo: Brenton Geach)

Police Minister Bheki Cele has promised more roadblocks, more vehicle checks and more high visibility patrols for control and adherence to Covid-19 lockdown regulations. Policing this lockdown, he said, was like “crisis policing against an invisible enemy” with “shifting goalposts between law enforcement and civil liberties.”

Police set water cannons on masked and physically distanced protesters participating in a national campaign against the Covid-19 lockdown triggered haemorrhaging of jobs in the hospitality sector.  First near the gates of Parliament and then in nearby Buitenkant Street.

As SAPS armoured vehicles and police officials in body armour moved down the street from Parliament, a policeman used a loud hailer to announce, “You have been warned. Go inside your workplace… Clear the area”.

Then water cannons sprayed into shops in Buitenkant Road where empty tables and chairs had been put to illustrate the lack of trade, according to News24.

GroundUp also reported the arrest of four men, who were fined for contraventions of the lockdown regulations.

DA Chief Whip Natasha Mazzone who was on the scene, including in a flooded Internet café, issued a statement criticising the police’s “senseless violence”. She said the DA would lay criminal charges.

“Regardless of Covid-19 and the national lockdown, basic democratic and constitutional rights must be protected, such as the right to peaceful protest”.

But perhaps like Cele’s mishmash of metaphors – from stormy sea voyages to missions and how “all men and women in blue…collided with the 360 turn of events” – his comments on Covid-19 policing are illustrative how the SAPS is conflicted by constitutional imperatives and kragdadigheid.

“(W)e find ourselves in a quagmire wherein ‘crisis policing’ against an invisible enemy implies the constant shifting of goalposts between law enforcement and respect for civil liberties.

“It is in this context that our policing discipline becomes more critical in ensuring that our fight against Covid-19 is both constitutionally compliant and consistent with the public good,” said Cele.

The past two days’ debates on the Special Adjustment Budget votes of Police, Justice and Defence have raised questions over the state of play in government.

While controversy clouded the approval of Jennifer Dikeledi Ntlatseng’s nomination for Ipid head by the parliamentary police committee – it still has to go to the House for adoption – not so the presidential appointment of former spook boss, defence sector entrepreneur and ambassador Sonto Kudjoe, as new Secretary of Defence.

The appointment from 1 August 2020, when incumbent Sam Gulube retires from the post he held since 2012, was made public by Defence Minister Nosiviwe Mapisa-Nqakula delivering her Budget vote speech on Thursday.

Kudjoe resigned as boss of the State Security Agency in August 2016, some three years after becoming the first woman SSA director-general. Having previously served in the South African Secret Service, she was ambassador first to Sweden then Egypt between 2002 and 2010.

In late 2018 she joined security and armaments manufacturer Paramount South Africa, some two months after it was established at the Africa Aerospace and Defence gathering in September 2018 as “a transformed Black-owned Enterprise that is designed to provide the future capability requirements of South Africa’s defence, police, border and peacekeeping forces whilst driving the resurgence of the local industry.”

But it was opposition parties which highlighted the death of Alexander resident Collins Khosa at the hands of soldiers and the apparent lack of consequences so far, and how the SANDF actually benefited from its lockdown deployment – to the tune of some R6-billion, according to Freedom Front Plus leader Pieter Groenewald.

Co-incidentally this last presidential deployment letter is a firm indication of further extensions of the State of Disaster that allows for the lockdown restrictions on, among other, alcohol, tobacco and movement. Already the State of Disaster has twice been extended, one month at a time, after the initial statutory permissible three month period ended on 15 June 2020.

It remains unclear at this stage how many times more the national State of Disaster will be extended.

“The NPA remains bogged down in the mess left after State Capture and will never be able to function at the level required while it remains under-resourced,” said Breytenbach, adding later over the eyebrow-raising ministerial comments how no public consultations were needed on the Covid-19 lockdown regulations.

“He (Lamola) has not uttered one word about the excesses of the securocrats around him and is clearly happy to turn citizens into criminals by endorsing draconian lockdown regulations with no regard for reality or the resultant misery.”

Covid-19 lockdown or not, Lamola used the parliamentary debate to highlight next year’s quarter-century milestone of the Constitution that became South Africa’s supreme law in 1996. Describing the country’s constitutional democracy as “resilient, robust and evolving”, Lamola said:

“Our Constitution, regardless of the challenges that the nation has experienced over the past years, has served our people well. The commitment to build and deepen constitutionalism, respect for human rights and the rule of law continues”.

A programme would be organised for a national engagement and conversations about the state of South Africa’s constitutional democracy marking a quarter-century.

Against a Covid-19 lockdown that is among the longest and most draconian, such constitutional conversations may be quite interesting. DM