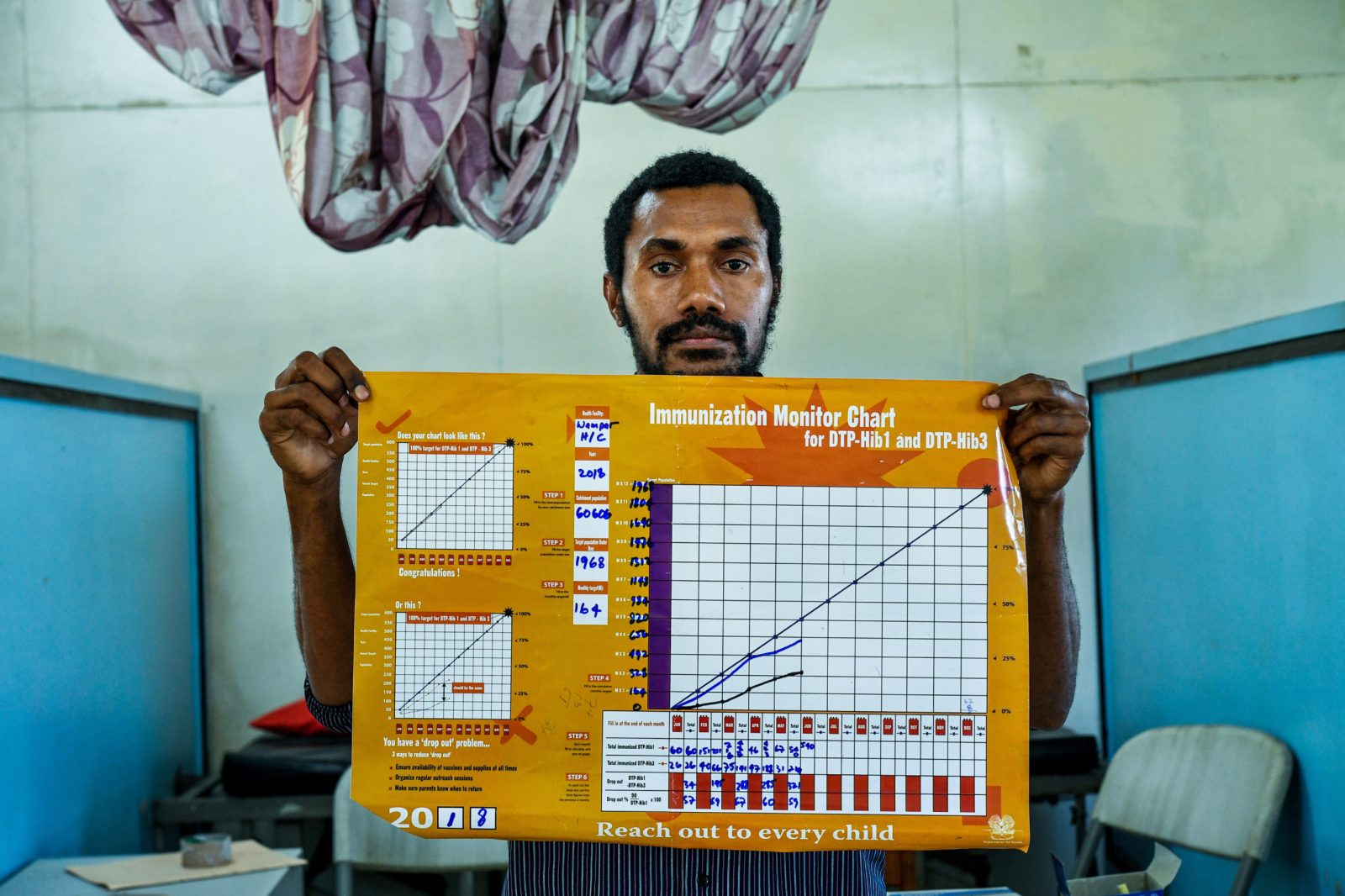 epa06912998 A health worker holds a Polio Vaccine chart at Wampar Huongulf district Health Clinic where the Polio Vaccine is administered to children in Lae, Marobe Province, Papua New Guinea (PNG), 24 July 2018 (issue 27 July 2018). A confirmed Vaccine Derived Polio Virus (VDPV) in Lae, PNG's second-largest city, was reported to the World Health Organization (WHO) on 21 June 2018. Four rounds of supplementary immunization activity (SIA) targeting children less than five years of age is planned from July to October 2018, to combat the virus. Gavi, the Vaccine Alliance, is a public-private partnership whose mission is to save children's lives and protect people's health by increasing access to immunization in poor countries. EPA-EFE/GAVI/BRENDAN ESPOSITO MANDATORY CREDIT GAVI/BRENDAN ESPOSITO -- IMAGES AVAILABLE TO BONA FIDE MEDIA FOR REPORTS ON GAVI OR RELATED ISSUES. NO OTHER RIGHTS GRANTED OR IMPLIED -- AUSTRALIA AND NEW ZEALAND OUT EDITORIAL USE ONLY

Papua New Guinea has asked for the World Health Organization (WHO) help as the government worries the country is facing large-scale community transmission.

The government also ordered the mandatory wearing of face masks in public in the capital, Port Moresby, as part of a slew of measures to help contain the spread of the disease, The National newspaper reported on Thursday.

Prime Minister James Marape was also quoted as telling residents “not to be complacent or too relaxed because the COVID-19 is spreading”.

“All the health measures which have been repeatedly announced in the media must be taken seriously to save lives,” he said.

According to reports, nightclubs will also be banned from opening, although churches, restaurants and bars will remain open.

Having mostly dodged the COVID-19 pandemic until now, Papua New Guinea reported on Thursday it had detected three new cases in the previous 24 hours, bringing its total caseload to 30 – up from just 11 on Sunday.

The country also reported its first confirmed coronavirus-related death in the capital Port Moresby on Sunday. The 48-year-old woman had been previously diagnosed with breast cancer.

With limited coronavirus testing and many positive cases found in health workers, the authorities are concerned the virus might have a stronger foothold than the detected cases suggest.

National pandemic response controller David Manning expressed “serious concerns on the alarming rate of increase of COVID-19 cases in Port Moresby and the likely spread to the other provinces”, saying there was a “high likelihood of expanded community transmission”. ‘Urgent need’

Papua New Guinea is one of the poorest countries in the Pacific.

Its health system is already under severe pressure from the widespread transmission of malaria, tuberculosis and HIV/AIDS, as well as one of the world’s few remaining outbreaks of polio.

Manning said the WHO was in the process of mobilising international emergency medical teams to deploy to the country and there was “an urgent need” for emergency health workers to help the country manage the outbreak.

“We are also discussing with the PNG Defence Force to assist … the Health Department. We have always said we don’t have adequate facilities.”

Manning admitted testing had been “very limited” in areas outside the capital, and “while there is no evidence of hospitals being overwhelmed”, that could “be due to delayed reporting or poor health checking behaviour”.

Last week, the WHO announced that it was “scaling up testing” of coronavirus in the country, providing additional laboratory supplies, including more than 1,700 cartridges and 25,000 tubes for collection of coronavirus test samples.