Muslim prayers in Hagia Sophia for first time in 86 years 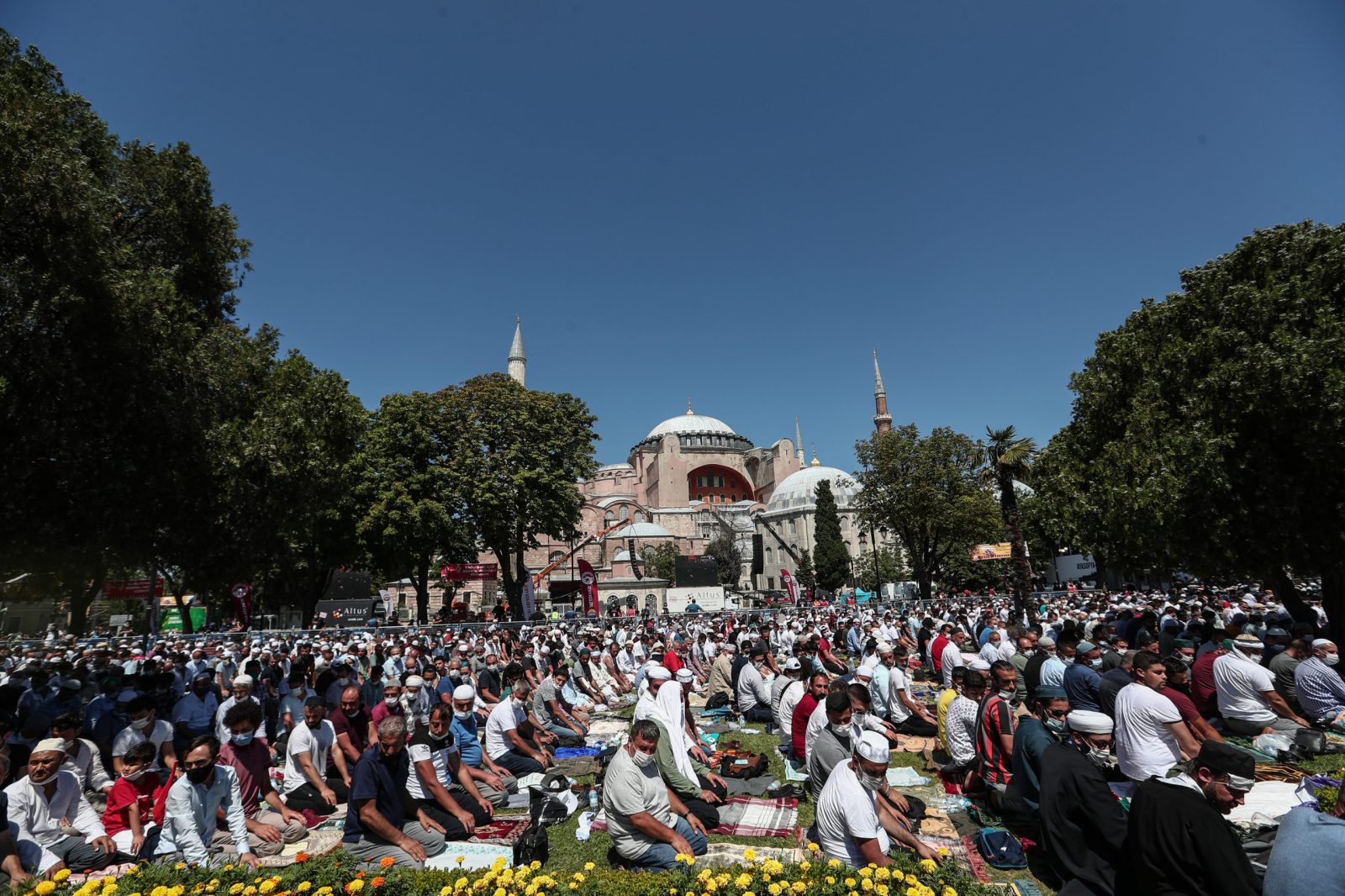 epa08563946 People perform the first Friday prayer during the official opening ceremony of Hagia Sophia as a mosque in Istanbul, Turkey, 24 July 2020. Turkish President Recep Tayyip Erdogan will attend the first Friday prayers. Turkey's highest administration court on 10 July ruled that the museum that was once a mosque built in a Cathedral would be turned into a mosque again by annulling its status as museum. EPA-EFE/SEDAT SUNA

Muslim prayers will echo on Friday from the iconic Hagia Sophia in Istanbul for the first time in 86 years after its reconversion into a mosque earlier this month.

The UNESCO World Heritage Site was built as a cathedral during the reign of Byzantine emperor Justinian I in 537 but converted into a mosque after the Ottoman conquest of Constantinople in 1453.

It was designated a museum in a key reform of the post-Ottoman authorities under the modern republic’s founder Mustafa Kemal Ataturk.

Erdogan, who is scheduled to join hundreds of worshippers on Friday, said last year it had been a “very big mistake” to convert the Hagia Sophia into a museum.

Critics however accuse Erdogan, who has been in power for 17 years, of playing to his nationalistic base, with support eroding amid a global economic downtown caused by the coronavirus pandemic.

Towering over Istanbul’s skyline, its breathtaking domes seemingly afloat, it is also one of Turkey’s most popular tourist attractions, with 3.7 million visitors in 2019.

Al Jazeera’s Sinem Koseoglu, reporting from Istanbul, said it was “a very big day” in the city of some 18 million.

“The heart of the city, the historical peninsula, is under total lockdown since last night,” she said.

“It’s closed to traffic because hundreds of thousands of citizens are expected to arrive in the area outside of Hagia Sophia.”

The United States, the European Union, Russia, UNESCO and various church leaders expressed concern at the change in status, while neighbouring Greece branded the move an “open provocation to the civilised world”.

Erdogan insisted it was Turkey’s “historical and sovereign right”.

Turkey pledged to keep Hagia Sophia open to tourists and welcome those of all faiths. Entry will now be free.

Top religious authority Diyanet is in charge of the mosque. Its head, Ali Erbas, said between 700 and 1,000 people would be able to pray inside on Friday while maintaining a distance of 1 metre (3.3 feet) from each other.

The floor has been covered with a turquoise carpet chosen by Erdogan.

Intricate mosaics of the Virgin Mary, baby Jesus and other Christian symbols will be veiled by curtains at prayer time.

In the sprawling square outside, separate areas will be set up for men and women to worship, according to the Anadolu state news agency.

Koseoglu said Erdogan was expected to deliver a short speech after the prayer.

“This is a very historical moment for Turkey, especially the conservatives pro-Islamist electorate who have [long wanted] to pray inside.”

On Friday, most roads to the venue will be blocked and public transport curtailed. Istanbul Governor Ali Yerlikaya asked for people to bring four items – “masks, prayer mats, patience and understanding”.

Some 736 health personnel, 101 ambulances and a helicopter ambulance will also be available.