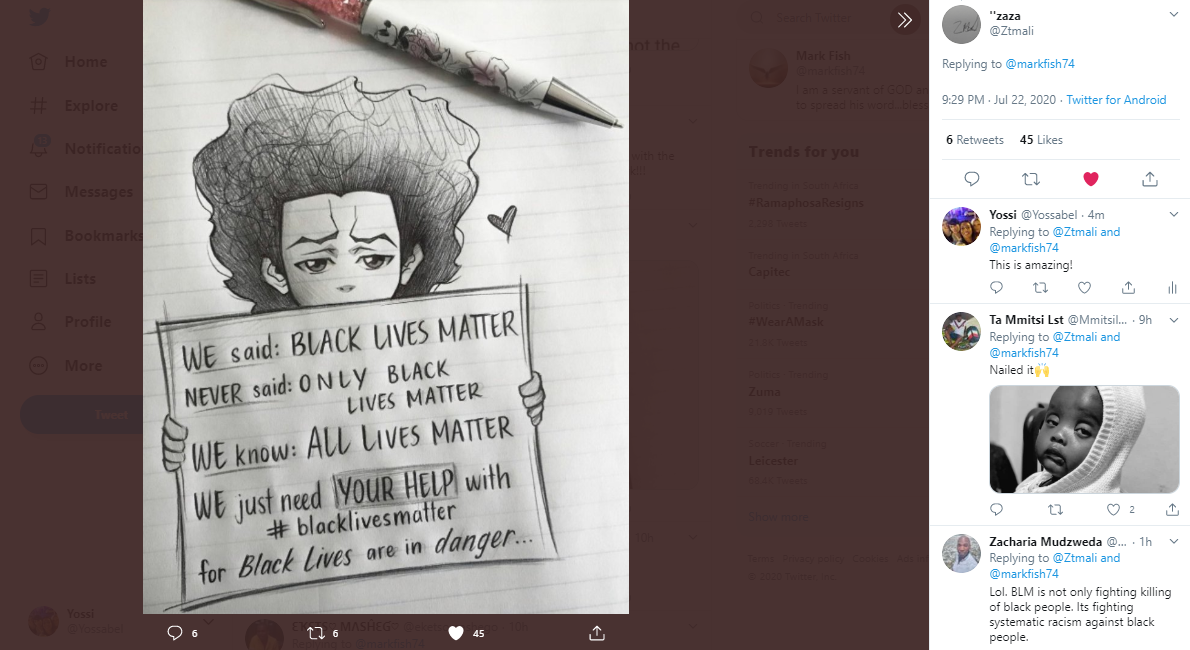 This is a summary of the trending, highest impact, and most active themes and their narratives related to social cohesion and division in South African public-domain social media conversations on 22 July 2020.

Debate over the Black Lives Matter movement was rivalled by growing dissatisfaction over the government’s response to the Covid-19 pandemic on Wednesday. Building on a recent trend, discussions about love and relationship flourished as people sought solace amid the unfolding devastation.

“Mark fish” and “lives matter” were among the day’s top three topics. The former South African footballer was lambasted by South Africans after his comments on Twitter were interpreted as promoting “All lives matter” in favour of Black Lives Matter.

Early in the day @Terryboysa73 challenged Mark Fish to clarify his position on a racist tweet he had allegedly “liked”. The tweet in question: “Fuck BLM…Fuck Kolisi, he’s a BEE appointment…Racist MN arrived to a white girl, Just like Mmaimane!”

Fish’s alleged “like” cannot be seen at present, and it is unclear whether he removed the like after receiving @Terryboysa73’s post. But, in response to @Terryboysa73, Mark Fish commented: “All lives matter…!!” Many angry tweets followed. At 21:12 Fish tweeted: “I see my inbox of a lot of hate but always know…all lives matter …know matter where we come from!” This post received more than 1,300 likes and around 300 retweets by Thursday morning. 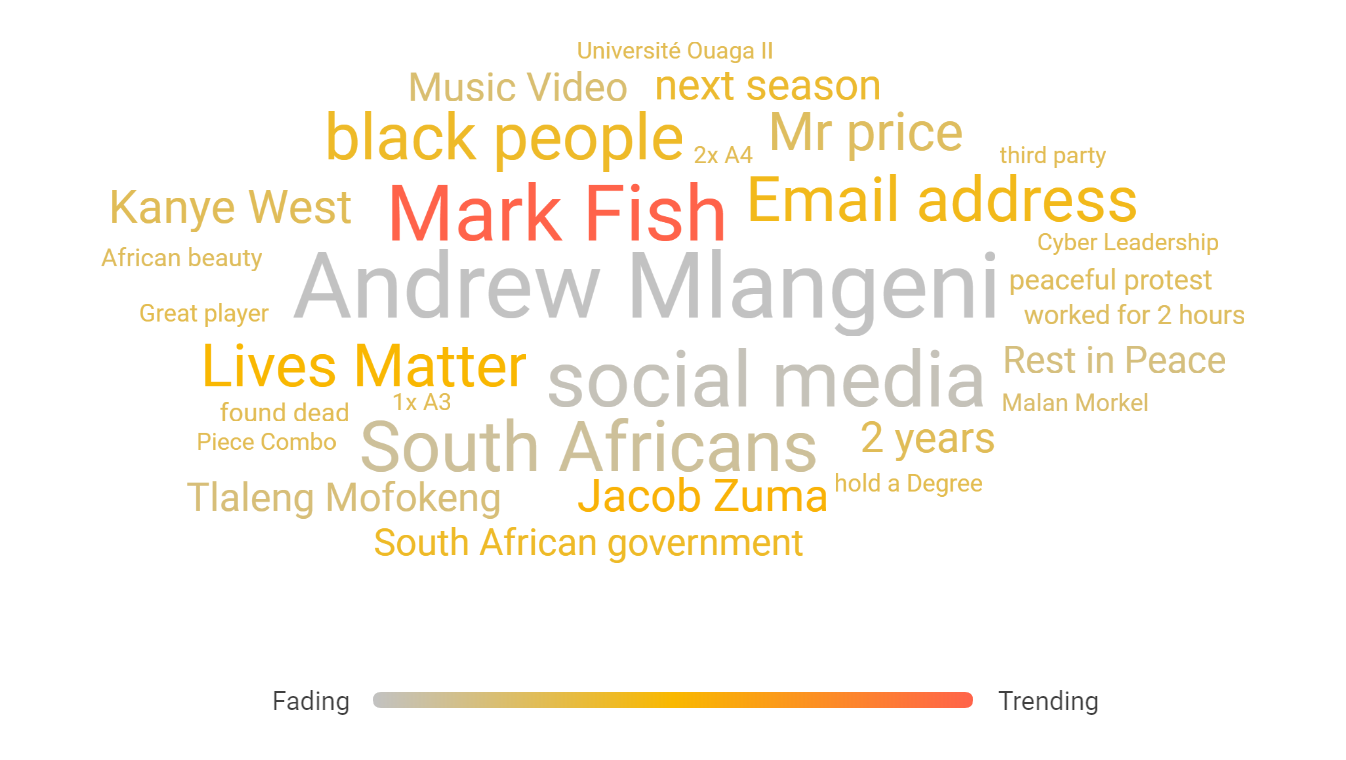 Mbuyiseni Ndlozi declared: “Mark Fish’s denial of the legitimacy of Black Lives Matter reflects the failure of the rainbow nation ideology his sportsmanship in Bafana Bafana represented. It tells you that within rainbowism is a denial of the black condition, false equality & fake unity!” This post was retweeted close to 800 times and has received more than 3,200 likes by early Thursday.

@ali_naka tweeted an image of the soccer player with: “Mark Fish got tired of pretending about the Rainbow Nation Myth.” This post received more than 300 retweets and close to 900 likes.

@SuperiorZulu tweeted: “Being angry over Mark Fish comments of ‘All lives matter not just black’ is pointless since it won’t change the fact that the system from economics to corporates etc oppresses blacks.” His post was retweeted more than 130 times and it has received more than 500 likes.

The number one post that relates to this topic by both reach and impact was a tweet by @Julius_S_Malema: “Mark Fish is white.” This tweet has already been retweeted close to 900 times and it has received more than 5,000 likes by Thursday morning.

@RobynPorteous tweeted: “Quick question: where was ‘all lives matter’ from 1948 to 1994? Asking for a majority population.” Her post received over 900 retweets and more than 2,000 likes. @Roland_Williams commented on Porteous’ post: “Let’s decloak the crap: the ‘all lives matter’ mantra is simply a slogan for racism. When Mark Boucher said ‘Save the Rhino’, no one accused him or anyone else (myself included) of disregarding the plight of penguins or leopards or pandas.” His response was retweeted four times and received 25 likes by Thursday.

On Wednesday, many South Africans expressed their frustration with the government’s handling of the Covid-19 pandemic.

As the full economic impact of the pandemic compounds the impact on the nation’s health, @SABCNews reported that the South African government has secured a R5-billion loan from the African Development Bank. This tweet was liked over 1,300 times and retweeted over 1,900 times.

Many comments were cynical. @robzinterris tweeted: “We all know half of this money will end up in people’s pockets as usual… In fact the biggest question is how we gonna pay back the money!?!”

The government was heavily chastised for an erroneous tweet posted about the alcohol and tobacco ban, after issuing this correction: “This account posted a tweet earlier today which said that the ban on the sale of alcohol and cigarettes would remain in place throughout the lockdown period. This is incorrect. The sale of alcohol and tobacco products is prohibited under the current Level 3 regulations. This decision may be reviewed at any time by the relevant structures should the conditions which necessitated it change. We regret any confusion the tweet has caused.”

The communication blunder came on the day that South Africa’s restaurant industry staged protests against the ban on alcohol sales. @ezaap shared a video of a 200m long table laid out in Wellington near Cape Town with 1,000 empty seats, representing the jobs lost due to the lockdown regulations. The tweet was liked and retweeted almost 3,000 times.

@SiyaMtitshana shared a photograph of someone watching two people kissing: “Me every time I see cute couples in my TL.” This tweet received over 13,900 retweets and 40,000 likes.

Some users expressed their thoughts about the value of romantic relationships. @Harryolah tweeted: “I’m sorry, sex will never be enough for me to stick around. I need my soul fed, spiritual growth, teach me, mould me, guide me, talk to me, love me endlessly, connect with me, and understand me.” This tweet gained traction with over 18,500 retweets and 53,300 likes by Thursday morning.

While some social media users shared their exhaustion, others spurred them on with snippets of motivation. @ZeeRight tweeted: “I am so tired of living. I find joy in nothing. I have to force myself to do anything, work, school. The only time I feel free is when I am sleeping.” This received considerable attention with over 1,500 retweets and 4,800 likes.

@Mahlatse_mogale tweeted: “Do not disrespect someone’s hustle because yours is now paying off. Life is unpredictable. Good Morning Bana Beshu.” This tweet received 82 retweets and 467 likes.

Conversations about mental health and setting personal boundaries drove considerable volume on social media.  @jadejadores tweeted “You actually know when you’re moving onto the next chapter of your life. It’s a feeling of outgrowing things, habits, people & just developing yourself overall”. This received significant attention with over 31,600 retweets and 96,000 likes.

@langelihlee_m tweeted: “If a relationship is the only thing in your life that can make you happy, then you’re in trouble, ‘cause it can be taken away from you. You need a higher purpose. You need passion. Be so rooted in your being that nobody’s absence or presence can disturb your soul.” This received 1,700 retweets and 5,200 likes.

@Fact tweeted: “Don’t chase people. Work hard and be yourself. Under these two principles, the right people will find their way into your life.” This was retweeted 1,100 times and liked 3,600 times.

@MasekoValencia echoed this sentiment in a tweet that read: “When your spirit is too strong you may be rejected a lot by people and at times you’ll begin to think unesinyama. Your spirit will never allow you to stay in an environment that is disruptive,  so it will also chase those weakening it out of your life.” This tweet received 740 retweets and 2,900 likes.

The death of South African apartheid activist and struggle icon, Andrew Mlangeni, trended widely on Wednesday. Many people paid tribute by sharing some of his most memorable contributions. 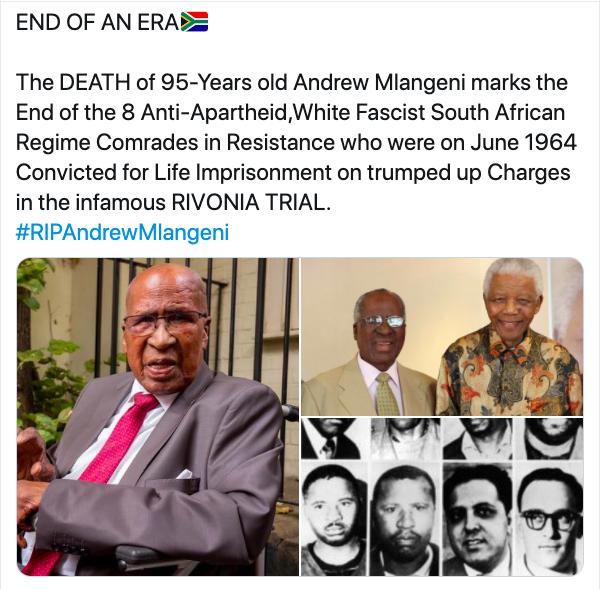 Former Public Protector @ThuliMadonsela3 shared two photographs of Andrew Mlangeni with this message: “The last of Mandela’s Rivonia Trial fellowship has fallen. There is no better life than that lived in accordance with truth and integrity in service to humanity. Tata Andrew Mlangeni resolutely stood for truth and justice for all till his last breath. #RIPAndrewMlangeni.” This tweet received 99 retweets and 693 likes.

@HonourableMedia shared three photographs of the activists in the Rivonia Trial: “END OF AN ERA🇿🇦. The DEATH of 95-Years old Andrew Mlangeni marks the End of the 8 Anti-Apartheid, White Fascist South African Regime Comrades in Resistance who were on June 1964 Convicted for Life Imprisonment on trumped up Charges in the infamous RIVONIA TRIAL. #RIPAndrewMlangeni.” DM