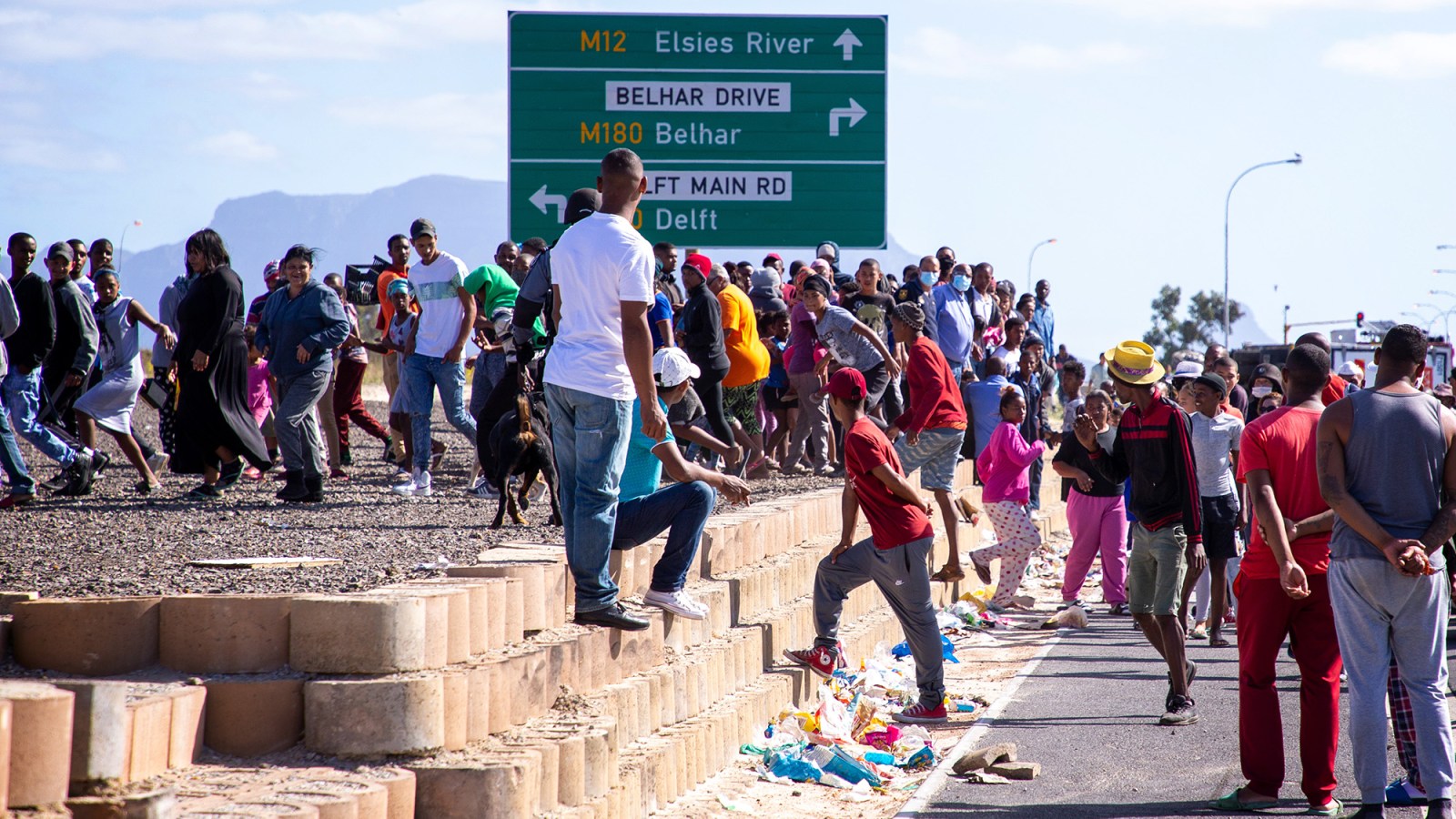 Opportunism led to the looting of a liquor store in Delft, said the chairperson of the local community policing forum. Since Tuesday, lootings and tyre burnings have erupted in the area, now deemed ‘volatile’ and under police watch.

Tuesday and Wednesday saw land invasions and looting in Delft, about 20km from the Cape Town CBD, and 11 people, including minors, have been arrested for the looting of a liquor store.

The chairperson of the Delft Community Policing Forum, Pastor Charles George, told Daily Maverick the root cause of the looting and land invasions was frustration – the area recently had sewerage pipes blocked, water stoppages and then load shedding hit. Mostly, he said, people were tired and frustrated with “government promises”– and nothing happening.

George maintained that it was “not necessarily so that the land invaders were the same people who were the looters”. He said the looting “possibly could have criminal elements as police were monitoring the invasions”.

The first inklings of land invasions began at the weekend, but according to WhatsApp messages and videos Daily Maverick has seen, matters escalated on Tuesday afternoon.

George said the people behind the looting were “opportunistic”. He described those who were burning tyres as a “couple of gangsters”.

He said the situation was “volatile at the moment in the community… people are looking to vent their frustrations”.

“The City monitors attempts to invade land and illegally occupy projects and acts where it can. This is one of the many attempts currently to invade City projects. Apart from Cape Town as a community, the earmarked beneficiaries of projects are the biggest losers.”

Booi said the City would “continue to stand up for its communities and beneficiaries of projects and services”.

There had been a number of land invasion attempts at the City’s Breaking New Ground housing project, which is still under construction, said Booi.

“Beneficiaries of this housing project are some of the most vulnerable in Cape Town, including those currently residing in the emergency settlement of Blikkiesdorp.”

Illegal land invasions, which have flared up extensively over the past few weeks in Cape Town, Booi said, are “against the law and pose great fire, safety, health and flood risks. Having various new settlements forming in an unplanned manner also poses a risk to the City’s informal settlements Covid-19 response.”

Booi confirmed that the City’s law enforcement agencies and the South African Police Service (SAPS) were still in the area.

“The City’s law enforcement provided protection to the City’s Housing Department staff and its contractor during an operation in the area to remove illegally erected unoccupied structures,” said law enforcement spokesperson Wayne Dyason.

While roads into Delft were opened on Wednesday morning, by the afternoon, the City’s traffic department confirmed that Delft Main Road – a key entry point into the area – had been closed at two points.

George told Daily Maverick on Wednesday afternoon that cars were being stoned, a delivery bakkie had been burnt and the South African National Defence Force was on patrol in the area.

Responding to queries, SAPS Western Cape referred Daily Maverick to a statement sent out on Wednesday, which said:

“Western Cape police have reinforced deployments with crowd control capacity at identified hotspots in the Cape Town metropole following sporadic incidents of public violence that have seen destruction of property, barricading of roads, looting of a liquor store and stone-throwing.”

Throughout Tuesday and Wednesday, videos spread on social media showing the looting of a liquor store and a grocery store.

The police confirmed that an ATM was also damaged and “overnight reports of a break-in, looting and damage to property were reported on Delft Main Road. Eleven suspects were arrested last night in the area for malicious damage to property, burglary and looting a liquor store after they were found inside the store with liquor.

“The suspects are expected to appear in the Blue Downs Magistrate’s Court soon.” DM