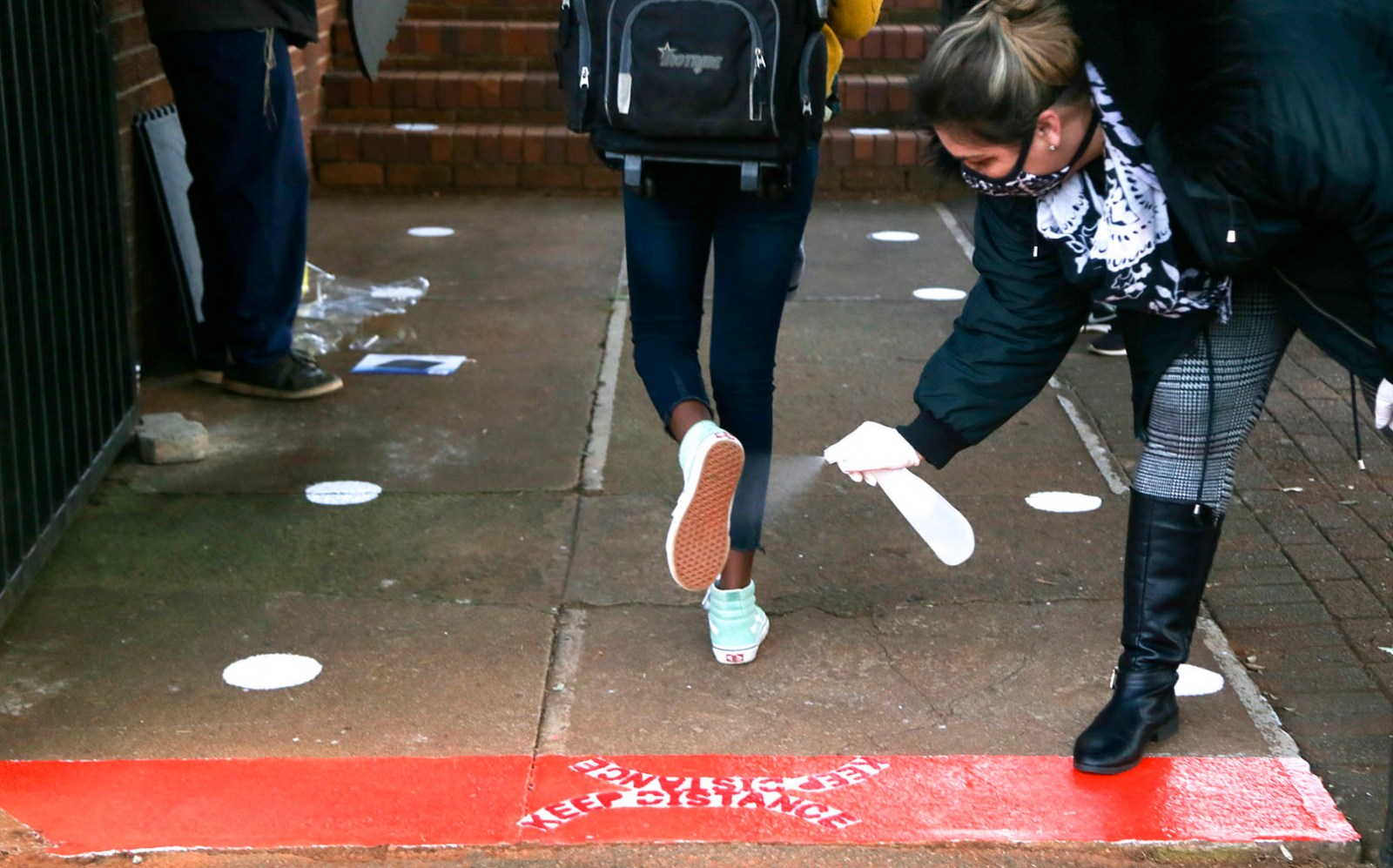 Nowhere in its official documents does the WHO state at what point in a country’s Covid-19 trajectory specific decisions in relation to schools must be taken, says the writer. (Photo: Gallo Images / Luba Lesolle)

A careful reading of the World Health Organisation’s policy documents shows that it does not stipulate when schools should reopen.

The World Health Organisation (WHO) has played a vital role in evaluating evidence on Covid-19 and coordinating global efforts to limit the harm of the pandemic. Unfortunately, statements by the WHO’s Michael Ryan seem to have created the incorrect impression that the WHO is advising countries not to reopen schools while cases and deaths are on the rise. Ryan’s statements should be viewed in the context of the press briefing and the WHO’s official documents.

The WHO has emphasised continually that while it is firm on key principles, countries themselves need to carefully assess their local contexts when making decisions. Nowhere in its official documents does it state at what point in a country’s Covid-19 trajectory specific decisions in relation to schools must be taken.

The WHO endorses the medical evidence that transmission of the virus by children is low and explains that this fact must influence decisions around schools. An advisory released in May 2020 concludes that infections among learners and teachers would be due largely to transmissions occurring outside the school and classroom. Moreover, the WHO has endorsed studies that have shown that closing schools is an exceptionally weak “non-pharmaceutical intervention” to reduce the spread of the virus, just as reopening schools is a weak facilitator of increased infections, relative to measures such as allowing businesses to operate.

Data collected by the Department of Basic Education, and which I have been involved in analysing, points to patterns which are in line with the WHO evidence. For instance, schools reporting learner infections are largely different from schools reporting teacher infections, supporting the finding that where teachers are infected, the source of the infection is not primarily learners. This is especially true where learners are young, at the primary school level.

This can be seen in the following graph, which portrays Covid-19 deaths per 100,000 deaths which would have occurred in 2020 with no pandemic. The source is the uniquely valuable OxCGRT dataset.

From the day South Africa registered its first Covid-19 death, it took the country 84 days to reach a cumulative total of 300 deaths per 100,000. This was reached in less than 25 days in Italy, the UK and Sweden. In the face of a drawn-out Covid-19 trajectory, South Africa and other developing countries face the risk of an unacceptably prolonged disruption in schooling if the decision to keep schools closed is taken too hastily.

Where in the pandemic countries ease their restrictions on schools 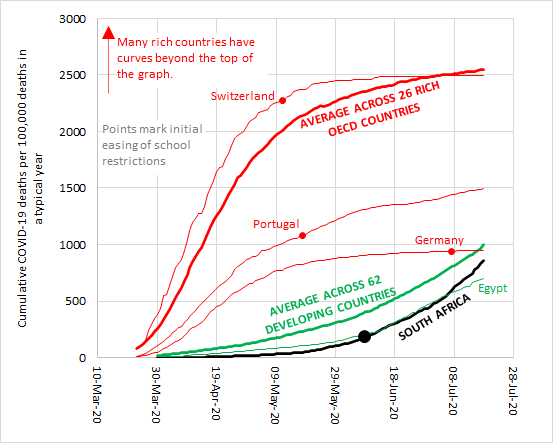 Rich and poor countries closed their schools almost simultaneously, nearly all in March 2020. The faster arrival of the Covid-19 plateau in rich countries offered these countries the luxury of school reopenings when, on the whole, daily cases and deaths were already in decline.

Developing countries, on the other hand, have in many cases been under pressure to reopen schools well before any plateauing of the curve. Among the 62 developing countries used for the graph, 26 had, by 18 July 2020, relaxed restrictions on schooling in some way. Importantly, over half of them, largely Latin American countries, had not. South Africa’s reopening marker, in black, is set at 8 June 2020, when Grade 7 and Grade 12 learners returned to school. Of the 26 developing countries which reopened schools, eight did so while deaths per day were rising. These include South Africa, Egypt, Ghana, Indonesia, Jamaica and Paraguay.

Teachers and parents in South Africa do, of course, have reasons to be concerned. Of these eight developing countries, only Egypt, which reopened schools on 7 June 2020, has reached a level of deaths comparable to South Africa’s. For schools to operate in a context where deaths are high and rising, is frightening. But this must be weighed against the costs to children of not receiving school meals, of losing out on learning and of not being cared for while caregivers are at work. These are the socio-economic costs the WHO insists should be taken into account when decisions are made.

Unlike in Kenya, which has closed schools for the remainder of 2020, in South Africa, children depend very heavily on school meals for their nutrition. In fact, in the region, it is precisely those countries with extensive school nutrition programmes which have opened their schools earliest. In South Africa, school meals have become especially important in a context where the ability of households to feed children has worsened during the pandemic, according to the recently run Coronavirus Rapid Mobile (CRAM) survey. 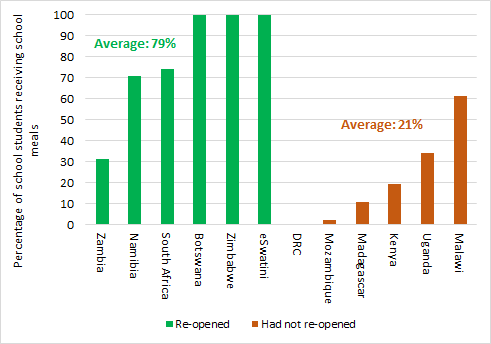 Estimates of learning losses I worked on for CRAM suggest that current disruptions could lead to below-expected outcomes in Grade 12 to as far as 2031, which would be devastating for skills generation. Children presently in the lower primary grades are likely to suffer especially serious long-term consequences. If foundational skills are not built up at the appropriate age, remediation at later Grades becomes almost impossible.

We should bear in mind that learning in schools does not work in neat packages of whole academic years. Learning is a delicate and continuous process, meaning that even a year with some interruptions is far better than prolonged and blanket school closures.

The WHO’s official documents, rather than one-minute video clips from its press briefings, should be considered its essential advice to countries. Ryan’s comments are, in fact, not aimed at South Africa, Egypt, Indonesia or any other developing country attempting to minimise disruptions to schooling while a protracted pandemic unfolds.

Given the timing and context of Ryan’s comments, they appear to be primarily directed at the fragmented and overly politicised policy response of the US, a country whose context and challenges are daunting, yet very different to our own. DM/MC

Martin Gustafsson is a socio-economic researcher at the department of economics at the University of Stellenbosch.