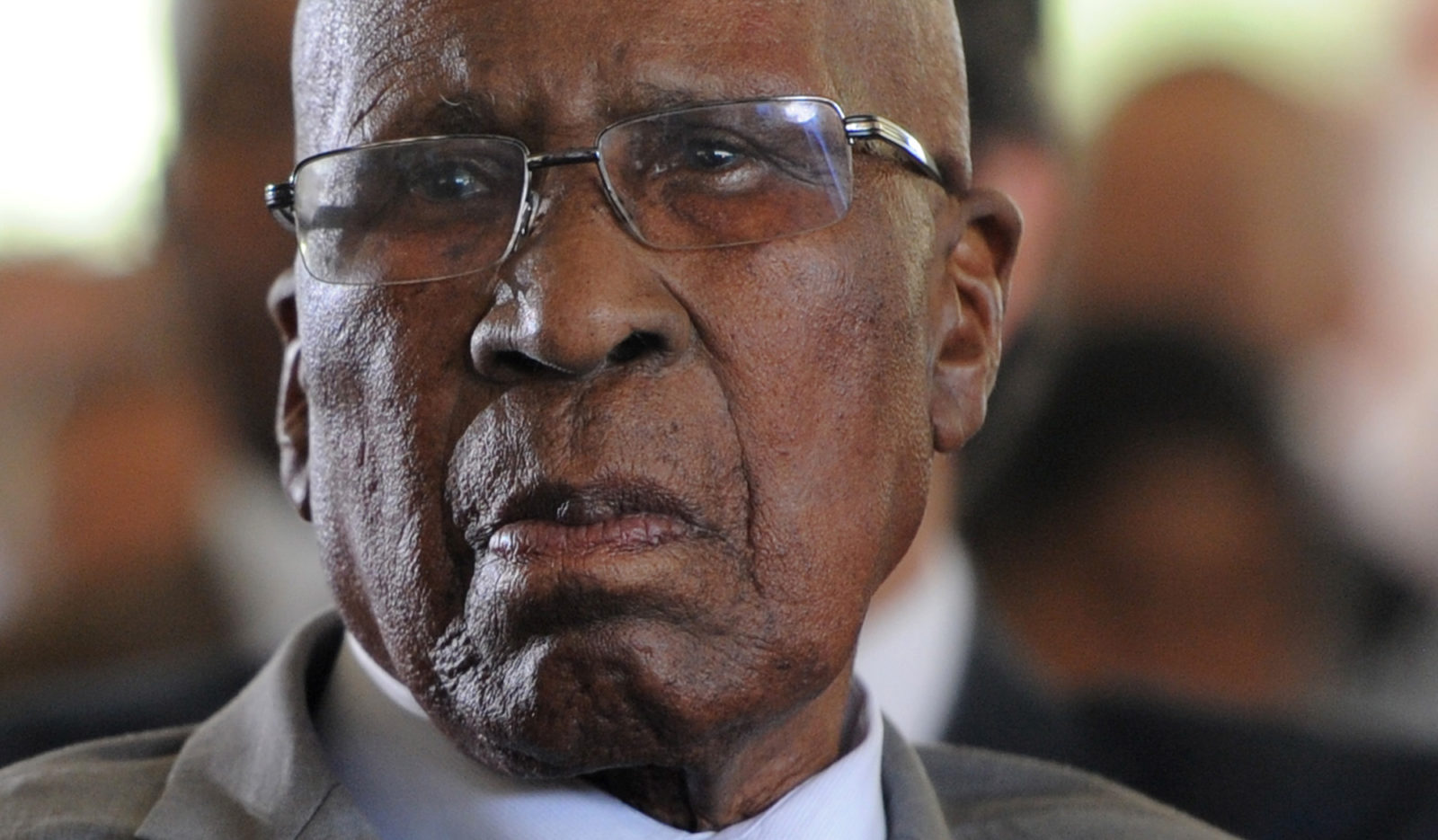 Struggle stalwart Andrew Mlangeni died aged 95 this week. Here, fellow anti-apartheid activist Cheryl Carolus pays tribute to an “exceptional, modest” leader whom she says has now put the baton in all our hands.

As I mourn, I am overwhelmed with gratitude and full of celebration.

I am grateful to have known him and to have learnt from him, to have laughed with him and to have cried with him. I will forever remember his unstinting courage and wisdom in some of the darkest hours of the country and of the ANC.

Andrew Mokete Motlokwa Mlangeni was born to farmworkers who were forced off their land and who went to Johannesburg in search of a livelihood. His educational aspirations were abruptly cut short because the family needed him to help sustain them. He quickly became a worker who helped to organise a number of worker actions to demand better pay and working conditions even before he joined the ANC Youth League in 1942.

He was one of the first to take the bold and courageous step to join Umkhonto We Sizwe and to go for military training when the ANC decided to take up up arms against the apartheid regime after the Sharpeville Massacre. His history as a Rivonia Trialist and his time on Robben Island together with Nelson Mandela, Walter Sisulu and others, is well documented. They are all deservedly held high in our memories for their bravery, for their courage and for their refusal to compromise on what they stood for, what drove them to act as they did in the formation of Umkhonto we Sizwe and the grounds on which they based their defence throughout their trial.

When faced with the strong possibility of getting the death penalty (as argued for strongly by the prosecution), Mandela famously took to the dock for his speech in mitigation. Speaking on behalf of all the trialists, he said: “These are the ideals for which I hope to live for; but, if needs be, for which I am prepared to die.” Those of us who were barely out of nappies when they went to jail, but who had gone through our own journeys that brought us into the fold of the liberation movement and who found our home within the ANC eventually, were hugely inspired by their bravery, and the purity of what drove them.

Upon their release, we were almost certain that they could not possibly live up to the images we had built up of them. Even elements in the apartheid regime believed that they would soon lose their “leadership shine” if they were released and would eventually just become “mere mortals”.

I can say without fear of contradiction that they not only met those expectations but in fact exceeded them.

Andrew Mlangeni was exceptional in that firmament of stars. While sharing the important characteristics of his fellow Rivonia trialists of patriotism; principled, ethical leadership; incorruptibility and just plain old fashioned human decency, he stood out in a number of ways.

He lived his life modestly. The house he moved into with Mam’June in Soweto is the one he was carried out of to the hospital when he died. His love and appreciation for Mam’June is well known. He spoke till his death of “the woman whom I found where I left her after 27 years in jail”. His enduring sadness was that she passed on shortly after his release. He wished God had given him more time to make her happy.

He was naughty and impish in his humour. He famously livened up an otherwise boring birthday party in his honour when he told the gathering that the secret to his longevity was to practice moderation in everything, one enjoyed, including sex. He went further and told the assembled guests that as much as they enjoyed sex, him and Mam’June agreed they should limit themselves to three times per week. Of course, there was much creeping under the table by children, grandchildren and great grandchildren!

His golfing passion and his contribution to the sport is legendary. In Parliament, he is remembered by many for this. Leon Wessels speaks fondly of their days on the benches of Parliament where many thoughts were fine-tuned on the Milnerton Golf Course. The Soweto Golf Club will miss him as they honour him annually.

He was never one to mince his words. He was always the one you could rely on to call a spade a spade and not a gardening implement. It was he who called out Jacob Zuma about the lack of ethics in his behaviour in the Nkandla scandal. It was he who led the drive in the ANC to hold those accountable who abused public funds. It was he who fought to have the ANC suspend those who are charged with serious crimes, particularly around abuse of public funds or public office. It was he who sounded the first alarm bells about State Capture. It was he who named Zuma as a ringleader who abused his leadership position in the ANC to enable the large-scale capture of our state for personal gain.

Under his leadership of the ANC Integrity Committee, our movement was urged to acknowledge the seduction of power and of greed that was to corrupt our organisation and create a rot in the capacity of our state that was and still is most acutely felt by the desperately poor people who, election after election, entrusted the ANC with their most precious possession, the vote.

He was as strict about this even when it came to ANC resources. As the Head of Transport in the newly unbanned ANC, we all ran the gamut of having to painstakingly account for every cent he gave us for petrol – no slip, no refund. Finish and klaar. He was fiercely insistent on how we used vehicles given to us by the ANC for our work. This included keeping the vehicles spotlessly clean because it was an asset that was paid for by the membership fees of our mostly poor support base.

Trevor Manuel said that Bab’Mlangeni was the best living example of “Batho Pele” long before it was adopted as the supposed ethic of our civil service. Tata was not only a leader, but he was also willing to be led, if you deserved it. Zuma was the first ANC President that Bab’ Mlangeni criticised publicly. He had criticisms of and advice for the other two presidents too. But he was always granted the opportunity to offer his counsel over tea. And his criticisms were always about policy, strategy or tactics. Never about values or morality. He publicly criticized Zuma after many attempts to speak with the then president quietly in one on one meetings and, when those failed, he dutifully took his concerns formally through the Integrity Committee and eventually to the top leadership.

When even this failed and those involved in State Capture became even more brazen and it became clear that the ANC was being captured too, Mlangeni decided to publicly express concern and called upon Zuma to step down until his name was cleared.

He joined his other two last surviving Rivonia Trialists, Denis Goldberg and Ahmed Kathrada in the work of the ANC Stalwarts and Veterans group that was formed explicitly to bring together cadres who remain loyal to the ANC and who decided that they will not keep quiet about their concerns. I was among the younger members of that group.

Many in the group strayed away from the ANC because it had become a monster that could not be reconciled with dearly held beliefs and hard won freedoms. Comrades Mlangeni, Kathrada and Goldberg gently but firmly pulled everyone back into the fold.

They were clear that the monstrous manifestations in the ANC at the time was not the ANC. They refused to abandon it to the rank opportunists who had embedded themselves around a corrupt leadership who bought loyalty to themselves personally through patronage and greed. They made it clear to us that it was another one of those moments in history when we had to “submit or fight”. Under their leadership and inspiration, we decided to fight the enemy within us.

Comrades Mlangeni, Goldberg and Kathrada were singled out for vilification by some like the leader of the so-called MKMVA as being “empty tins with no struggle credentials”. Many of us were outraged and wanted to respond. Bab’Mlangeni just laughed, from the bottom of his belly, in the way only he could, and asked us why we would want to get into a mud-slinging match. He said, “my dear, only pigs do well in the mud” and laughed some more.

He took his views all the way into the belly of the beast in the NASREC conference of the ANC.

He went to his grave proud of the day when Cyril Ramaphosa was elected ANC President and subsequently as president of our beloved country. And he was very sober about the reality that even though a decent, tried and tested leader like Ramaphosa was the President, and that our work was to cut out the cancer of corruption and it was only just beginning.

So as I mourn and as I smile, and give thanks for having known this giant, I am mindful of the fact that he had, in his usual gentle, firm manner, put the baton in our hands. We dare not drop it.

There is work to be done. This dreadful pandemic has stripped bare for us if ever we became blind to the scourges of poverty and inequality, and the misery it visits upon our people.

But the gift of Covid-19 is that there is at least an intellectual acceptance that it cannot be “business as usual”. If we are to rebuild our economy and our society, there has to be a new social pact. The  “haves” and those who have the social capital to access the opportunities that our country offers, cannot do so at the expense of the vast majority. Shared prosperity is the only sustainable future.

We cannot build the future we deserve on the sand of corruption and State Capture. We need to ensure accountability for those who masterminded our near demise so that it never happens again. At least, not in our lifetime.

Ramaphosa and the decent people in the ANC leadership will only succeed if the public (of whom the vast majority continue to trust the ANC), become active once more in building strong civil society organisations, not only strong vibrant ANC branches that can lead the country on a fresh path of success once more.

In the name of Andrew Mlangeni.