UIF relief extended until 15 August, help for self-employed in the making 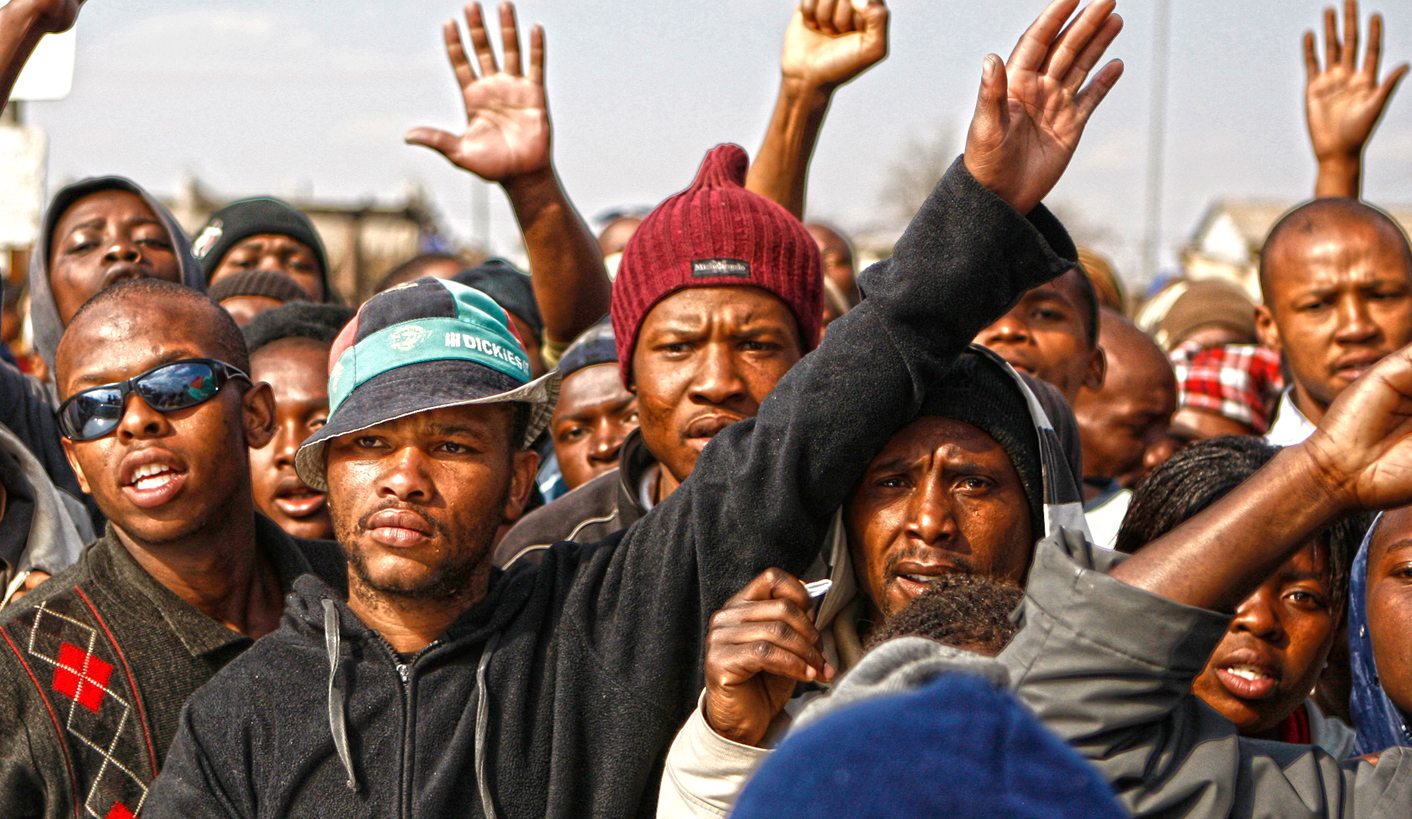 Job creation and job preservation were touted as the departmental unifying vision on Tuesday by Deputy Labour and Employment Minister Boitumelo Moloi . Photo: Protesters chant slogans in Siyathemba township outside Balfour in Mpumalanga on 22 July.

Covid-19 Unemployment Insurance Fund relief is extended by another six weeks to 15 August. That crucial public interest announcement was buried deep into the yada yada of Tuesday’s employment and labour Special Adjustment Budget debate that seldom rose above pedestrian politicking.

It took nearly 18 minutes for Deputy Labour and Employment Minister Boitumelo Moloi to get to the public interest announcement, or 1,956 words into the 2,870 word speech, excluding salutations.

“We have taken the decision to similarly extend the Covid-19 Ters [Temporary Employer/Employee Relief Scheme] benefit until the 15th of August 2020. The benefit structure and existing criteria remain the same. Applications for April and May will be closed by the end of July 2020, although applications already received for these two months will be processed.”

It is strange that this public service announcement was not at the forefront of the minister’s debate statement, given the hardship of the Covid-19 hard lockdown of five weeks from 27 March. And given the continued depressed livelihoods as the lockdown – now on Day 118 – kneecaps labour-rich sectors like tourism and hospitality with movement restrictions, a curfew and the renewed booze ban, while the informal sector also struggles.

The Unemployment Insurance Fund (UIF) Covid-19 Ters ended at the end of June. As the State of Disaster was extended for another month, to 15 August, so has this benefit now been extended. This did not happen with the first one-month extension of the State of Disaster to 15 July, indicating a potential policy shift.

Yes, the UIF has struggled and plenty of workers still await their April payments; Daily Maverick is informed of hard discussions and micro-interventions in the National Economic Development and Labour Council (Nedlac). But by mid-July, UIF paid Covid-19 funds of R34-billion to 7.4 million worker beneficiaries. And normal UIF benefits of R4-billion were paid to 677,000 beneficiaries.

Important public announcement take two: a policy review to extend the social protection network to the self-employed. The Covid-19 Ters has not been available for them, or companies with less than 10 employees, and estimates are that thousands of small and micro enterprises may well have closed down. (No further details were given.)

That would be a key area of future research, also for policymakers. What research, however, has established is that the unemployment crisis has worsened – and has hit hardest the already vulnerable: the poor and women.

Three million jobs were lost between February and April during the Covid-19 hard lockdown, according to the National Income Dynamics Study Coronavirus Rapid Mobile Survey 2020, the NIDS-CRAM 2020, overview report on the 11 working papers.

In Tuesday’s parliamentary employment and labour Budget debate, little, if anything, was made about the depth of the unemployment crisis, enmeshed in deepening poverty and hunger.

NIDS-CRAM 2020 is additionally important because Statistics South Africa joblessness data for the second quarter of 2020, or from April to June, will not be available for another two months.

Between January and March, unemployment skyrocketed to 39.7% on the broad definition that includes those simply too disheartened to even try to find work. This definition is widely regarded by researchers and civil society as a more accurate reflection of the state of (un)employment. According to Statistic South Africa’s June 2020 report, unemployment on the narrow definition is 30.1%.

The NIDS-CRAM 2020 working paper on labour market dynamics shows how those conventionally classified as employed dropped from 57% in February to 48% in April – or 38% if furloughed workers were included.

Currently, South Africa’s employment definitions regard still having a job, even if not being paid a wage, as being employed.

“Thus, about one of every 3 employed people in our sample either lost their job or did not work and received no wages during April. This has extremely large implications for poverty and welfare,” this working paper states.

The link between lost employment and poverty, including increased hunger, also runs through the working paper on labour market and poverty impacts. As do cautions about the long-term impact on South Africa’s labour market, as half of those who lost their jobs were retrenched and permanently laid off.

Social relief measures, aside from initially being delayed, also seemed not to have hit the mark in April: only one in five temporarily unemployed, or furloughed, workers received support, with one in three job losers receiving no support at all, according to the labour market and poverty impacts working paper.

As the impact of the Covid-19 lockdown measures have hit the most vulnerable and poorest, the working paper on the informal economy shows how 31% of informal workers who did not completely lose employment remained largely locked out from sustaining livelihoods. Hours of work dropped by between 32% to more than 50%. And women, again, are hit hardest: their work hours dropped by 49% – compared to men who lost 25% of hours – and informally self-employed women lost up to 70% of income.

As far back as 30 April, the National Treasury told Parliament it expected job losses of between three million to seven million. And how unemployment levels depended on the length of South Africa’s recovery: if it took the National Treasury-modelled 12-18 months, with the Covid-19 lockdown to end within six months of April, or longer, job losses would hit seven million.

In Tuesday’s parliamentary employment and labour Budget debate, little, if anything, was made about the depth of the unemployment crisis, enmeshed in deepening poverty and hunger.

The deputy minister in her earlier address identified South Africa’s drop in global competitive rankings to 59th spot as underpinning “our fundamental crisis of unemployment, poverty and inequality”. It would be addressed by advocating for a culture of productivity and competitiveness, said Moloi.

The EFF, like the DA and FF+, has rejected this supplementary Budget. But the ANC holds the numbers in the House to ensure the special Covid-19 budgetary adjustments will pass when the voting happens next Wednesday 29 July.

Job creation and job preservation were touted as the departmental unifying vision on Tuesday. Front and centre, as Moloi put it.

But first talking of unqualified audits and improved call centre call answering rates – rather than the extension of Covid-19 Ters relief for workers left jobless – skews that assertion of policy.

And when pretty words and policy – and action – do not match, that can only be a worry. DM