Reviewing 10X Investments’ performance for the first six months of the year, the asset manager’s CEO, Steven Nathan, focuses on two questions investors will be asking: How much poorer am I today because of the impact of Covid-19? And, more importantly: How much poorer will I be when I retire?

These questions will be focusing the minds of many investors, says Nathan after “some very tense moments this year”.

Watch the highlights of the mid-year review here.

“In March, markets around the world fell by 30%. It didn’t matter whether you were in the US market or in South Africa, markets fell by about 30%, sometimes a little bit more,” said Nathan.

Thankfully, he adds, most of those markets had recovered by the end of June. “The JSE is down about 3%. In dollar terms, the US is down 2%, Developed Markets overall are down about 5% and Emerging Markets are down about 10%.” 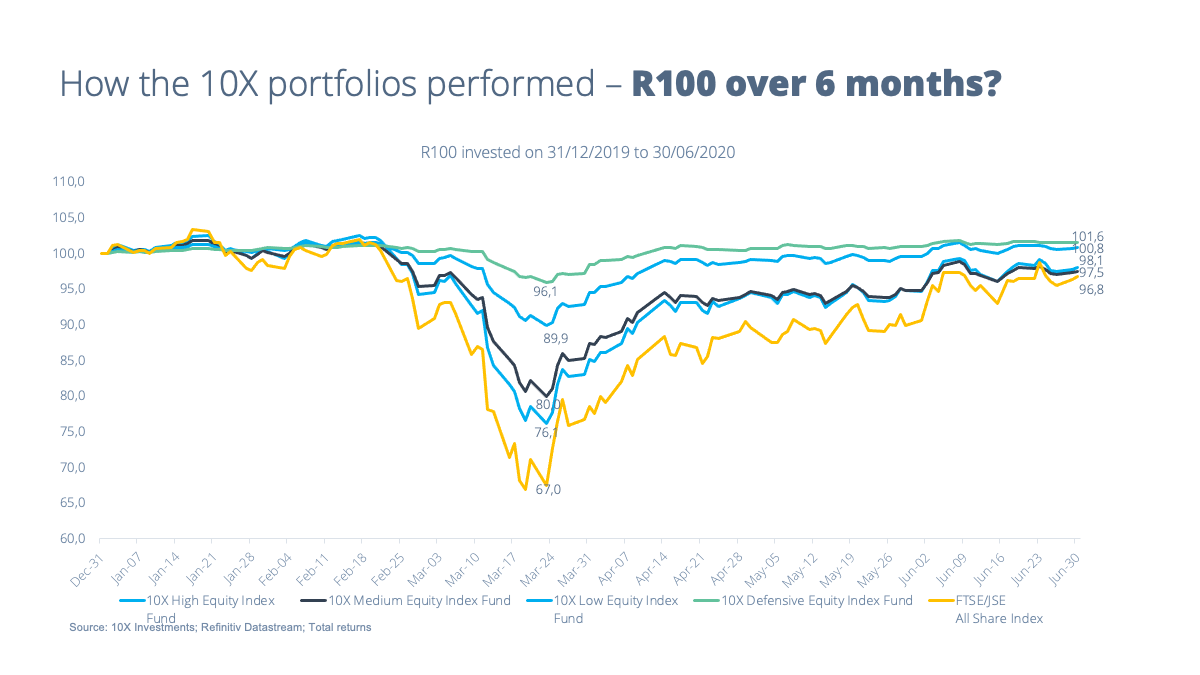 When equity markets fell in March, the 10X High Equity portfolio fell around 24%, the 10X Low Equity (-10%) and the 10X Defensive (-4%) portfolios fell by significantly less.

“Given the challenging economic environment these are satisfactory outcomes for the first 6 months of the year,” said Nathan. 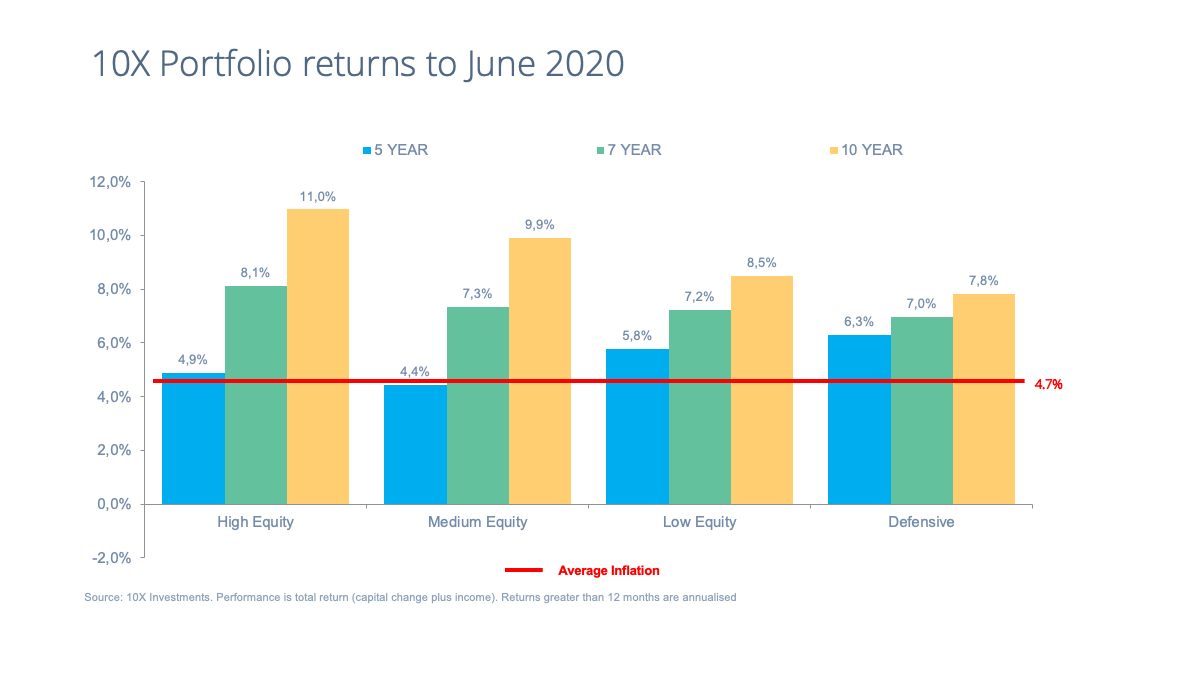 Looking at the 10-year returns for the 10X High Equity portfolio, “which is more relevant to long-term investors”, it has returned 11% per annum over 10 years, including the impact of Covid-19. With inflation over five years below 5%, that is a real return of 6% per annum.

So all equity markets have recovered significantly since the lows in March, but the same is not true for the rand. For the year to the end of June, the rand weakened by 19% against the dollar.

This was a poor performance, but it was in line with other Emerging Markets, says Nathan. Brazil was down 26%, Mexico down 18%, Argentina down 15%, Turkey and Russia down 13% in the year to June 30.

He points out that “despite all the challenges in South Africa, a lot of what happens in South African financial markets is determined by the global sentiment towards Emerging Markets”.

“At times of crisis, uncertainty and poor economic growth, investors tend to flee Emerging Markets. We are in that bucket, so we see the financial impact thereof,” he says.

The economic environment is clearly still bad, not just in South Africa, but globally. Nathan says he expects economic growth to be very low in South Africa this year and next, “with GDP set to contract by between 5% and 15% this year alone”.

The news is not all bad, though, he says. A weak rand can be a positive in the sense that it could make South Africa more competitive, both in terms of the cost of exports and as a place to do business.

Despite the rand selling off significantly the rand price of oil (and, as a result, the petrol price) fell significantly through April and May, providing some relief. Nathan also pointed to the soft inflationary environment, with May CPI coming in at 2.1%.

“This has provided scope for the South African Reserve Bank to aggressively cut the Repo Rate by a cumulative 2.75% to 3.75%, its lowest level in 50 years,” he said.

The lower interest rate, coupled with lower inflation, softens the economic blows of the lockdown and is a windfall for those who have not been impacted.

Nathan also noted that the global stimulus would likely be a positive force on growth. “Governments around the word are pouring a lot of money into their economies to stimulate growth. It will hopefully be positive for commodity and resource prices, where South Africa would be a beneficiary.”

So, undoubtedly, the environment is negative, but there are some positive takeaways.

As for the second question, How much poorer am I likely to be at retirement because of Covid-19?, Nathan says he always approaches the topic of outlook with caution. “As we all know, no one knows what the future holds.”

He adds, however, that there are long-term principles that will help investors maximise their potential to meet their long-term saving goals.

Nathan notes that investors should try not to spend too much time peering into the crystal ball trying to get a glimpse of what future performance looks like. “Performance is just one of a number of factors to consider, and the others are within investors’ control.”

“We all hope that Covid-19 will be beaten in the near future, that the lockdown will be lifted quickly.

“If this happened, we could all look forward to a far more positive environment for economic growth, for employment, for interest rates, for the rand and stability in the country in general.

“But we can’t guarantee any of it and we can’t influence it directly ourselves. Investors should focus on what they can influence: investing according to their time horizon, minimising fees, and saving as much as they can,” concludes Nathan. BM

Watch the full video presentation of the mid-year review here.