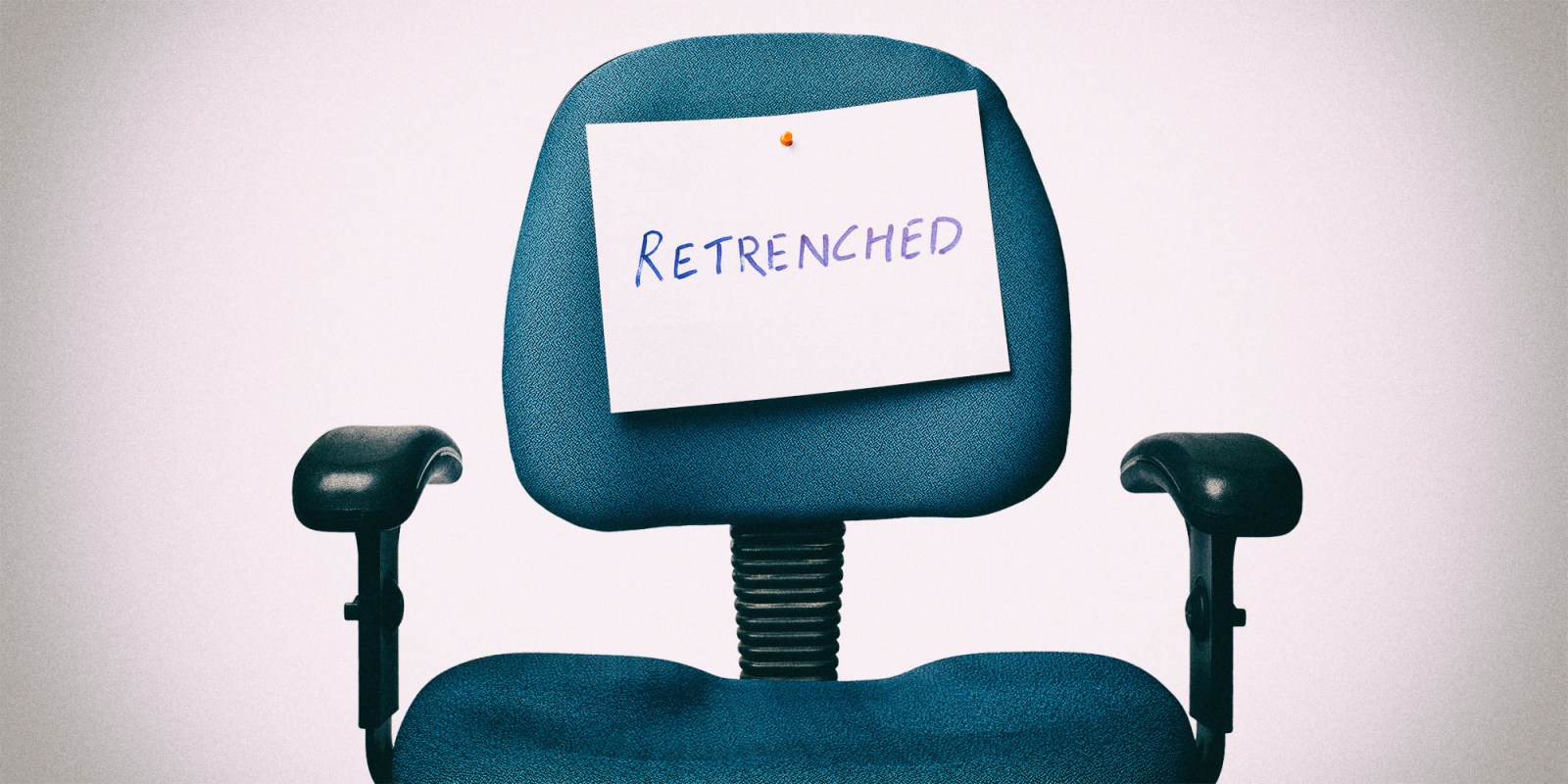 The whole retrenchment process needs a complete rethink. Probably the last person at fault in the equation is the employee. How can we create a better support system to ensure that that individual remains a viable contributor to the economy?

Exactly one year ago, in July 2019, we (the Alexander Forbes Research Institute), tried out an interesting experiment at a summit. As each conference guest arrived, we handed them an envelope. The envelope contained an official-looking letter informing them of their company’s plan to retrench them – complete with a full explanation of how the retrenchment process would work and what they could expect in terms of severance pay from their employer.

We knew it was likely that our guests might not take the notices seriously – so we probed deeper. We fired off a series of questions that required them to consider exactly what would happen if they had indeed been retrenched. Because their responses would all be anonymous, it was an opportunity for them to be brutally honest with themselves about their true circumstances.

Here’s what we asked:

It would quietly dawn on everyone in the room – and these were all human resources professionals and corporate leaders – that no one is ever really prepared for such a moment, no matter how much they might have tucked away in savings.

We had only just started the exercise, though. We needed our audience to understand that coping with retrenchment was not simply a financial matter. We needed them to understand why terminating someone’s employment had greater reverberations – not just for the individual, but for their families, the companies they would leave, and, most importantly, the broader economy. The act of retrenching employees may save a company – at least for a while – but we rarely stop to consider the impact of retrenchments on both the society and the economy.

We used the following infographic to get people to start considering the complex dynamics at play. 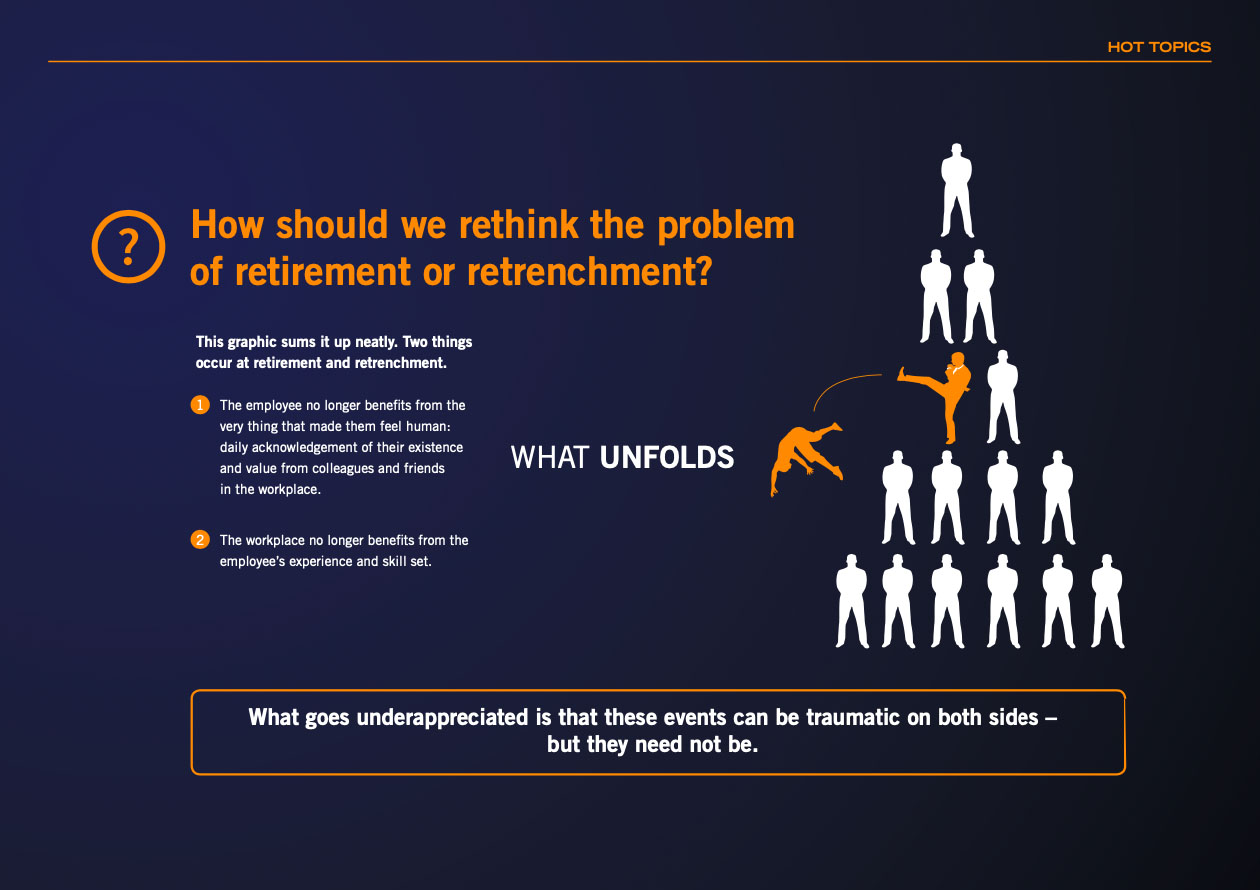 At first, one’s eye is drawn to the image of the individual being “kicked out” of the organisational pyramid. Most studies on retrenchment are quick to point out the type of post-traumatic stress syndrome that typically engulfs an individual who goes through the experience. Industrial psychologists liken it to experiencing a death of a family member, or divorce – but it can be far more insidious than that.

The workplace is more than an economic construct. It is also a social one. Retrenchment means that individuals lose a critical component of what makes them feel human: That daily acknowledgement that they can add value, and that their existence matters to colleagues and friends in the workplace. What we know from these studies is that, from a psycho-social perspective, there are at least five different areas of impact:

Against these emotional, physical and mental challenges, how do we actually expect someone to find their way back into the job market within the three-month window that family finances might allow? (This was the optimistic window that our workshop participants had estimated.)

But our disturbing infographic also reminds us that there’s another dynamic that employers may also miss in the retrenchment process. It’s the employer, and not the fellow employees, who determines whether an individual is “non-essential” to the day-to-day workings of the organisation. This assessment may be based on where it’s easiest to cut costs, or, if whole teams or divisions are being retrenched, their profitability.

It’s a process that can totally overlook the informal linkages that exist between workers that create the true operational efficiency of an organisation. Pull those linkages apart and, as our infographic reminds us, the whole operational essence of a company can be undermined.

In South Africa, for example, retrenchments and early retirement policies are often seen as providing an opportunity for companies to redress their transformation imperatives. Cull those employees who are the most senior or the closest to retirement and not only does this cut back on the company’s most expensive resources, but the way has now been cleared for a new generation of more representative South African leaders to move to the top.

But policies that provided quick financial wins failed to account for the longer-term economic reality that these experienced, skilled managers were actually essential for accelerating productivity. Without them, South African enterprises floundered fast. One can’t help but wonder what would happen if employees elected who in the company should be retrenched – if that was the only option available. Better yet, employees themselves could probably do a better job of determining how to redeploy people around the company so that retrenchment didn’t have to be the only alternative. Somehow, we need to find a way to include that option before the final axe falls.

What our workshops made patently clear is that the whole retrenchment process needs a complete rethink. To begin with, there needs to be a shared accountability. Probably the last person at fault in the equation is the employee. How can we create a better support system to ensure that that individual remains a viable contributor to the economy? In those workshops, we began to formulate a whole range of intermediations that would help employers consider the following:

Now here we are in mid-2020 – in the midst of a global pandemic and economic crisis. The retrenchment option seems unavoidable, so what could we do better?

This crisis demands that we take this line of thought one step further. What we recognise is that in the totally unknown future that this current crisis presents, we need to create a far more agile and holistic framework for coping with retrenchment and its myriad knock-on impacts. It will take our whole community to think this through.

Here is one example of how collaboration can introduce the type of radical thinking that we now require. In a recent conference call to those alumni of Harvard’s graduate programmes that were currently working in Africa, the question arose: “In a situation like this, when you are forced to retrench, what should be your most important considerations?”

Hakeem Belo-Osajie, a senior lecturer at Harvard Business School and Harvard’s Centre for African Studies, responded by saying: “Now is the time to throw out the rule book – and everything your HR departments may be telling you is ‘best practice’. This is a multi-dimensional crisis with nowhere to hide. It is a crisis of morale for your employees; it is a crisis of survival for you that will demand a rethink of your alternatives that were never in your business plans; it is a crisis of business models that will demand that we try to imagine what the new normal will look like in three or four years; and of course, it’s a crisis of health, where the fear of death means we need to think beyond minimum guidelines – both for the employees we keep and the employees we must lose. We will owe that much to the economies we work in….

“Going forward – throw out whatever pre-existing policies you might have around retrenchment. To survive this, you will need to retain those people who can best help you imagine that future, who can help you think out of the box in transforming your vision and mission of the past into something that will be workable for the future, who can help you to create those anti-fragility insights you will require to survive an uncertain future.” DM

Anne Cabot-Alletzhauser is at the Alexander Forbes Research Institute.