For Sama’a: As Britain resumed arms sales to Saudi Arabia, a deadly airstrike in Yemen 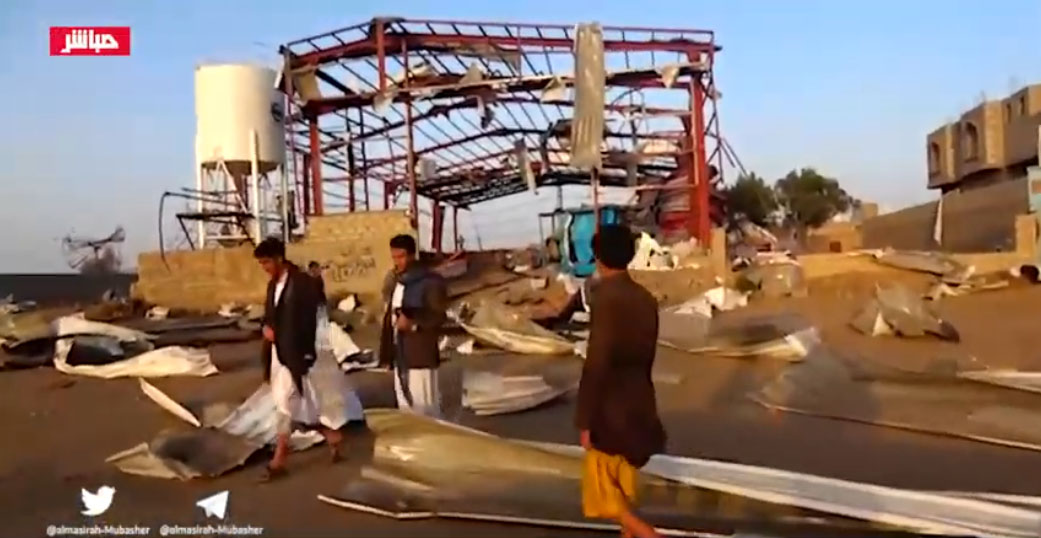 The remains of the depot in al-Maqash, which was targeted by the Saudi air force on 1 July. (Screengrab from Al-Masirah)

Eyewitnesses in Yemen tell Declassified UK’s reporter on the ground about the aftermath of an airstrike that killed a young girl and her grandmother.

“At first we suddenly heard an explosion. We saw a light that filled the store and the neighbourhood. We thought it could be a car exploding. We got out of the store and found people in panic and others screaming, ‘What happened?’”

Fikry Salem was working in a shop selling keys in the al-Maqash area of Saada, a Yemeni city near the border with Saudi Arabia, when the bombs hit during the evening of 1 July.

“I looked around and saw a cloud of dust rising. We asked: ‘What happened?’, and they said: ‘An airstrike’.”

Salem, in his 20s, added: “I tried to close the store just as the second airstrike hit. All the keys on the shelves dropped down and scattered in the store. I got on the ground and the lamps dropped to earth, and the electricity cut off.

“I closed the store very quickly and attempted to escape. I arrived near the cafeteria down the main highway on the other side just as the third airstrike hit. I got to the ground and hid as shrapnel dropped on us like rain.”

Salem had a message for the British population: “You’re targeting civilians, this never targeted any military targets, the casualties are civilians.”

Four strikes – of the kind that have repeatedly struck Yemen in five years of war – hit al-Maqash between 10.30pm and 11pm, the eyewitnesses say. One strike smashed the door and windows of the house of Ahmed Shalool, a local khat trader.

Inside the house, Shalool’s granddaughter Sama’a sustained a shrapnel wound and later died in hospital while his mother, Maryam Abu Raya’ah, was killed immediately.

The deaths added to the growing toll of nearly 9,000 civilians from an air war which has seen thousands of bombs dropped on Yemen, mainly by Saudi Arabia, since 2015.

The blasts in al-Maqash injured several others and the distressing aftermath was reported by Al Masirah, an outlet controlled by the Houthi movement which is fighting the Saud-led coalition in Yemen.

As it eased restrictions, the British government claimed: “There is not a clear risk that the export of arms and military equipment to Saudi Arabia might be used in the commission of a serious violation of international humanitarian law.”

Yet, within nine days of the arms ban being lifted, a further 29 civilians died in such airstrikes in Yemen, according to the Yemen Data Project.

‘They do not care for people’s lives’

Eyewitnesses at al-Maqash spoke to an independent Yemeni reporter sent by Declassified UK to collect testimony from the Houthi-controlled area in the northwest of the country.

A neighbour of Ahmed Shalool, who wished to remain anonymous, said: “I was the one who transported all of the seven wounded in my car to the hospital, all of them women except two men, but the girl died at the hospital.”

“Ahmed Shalool is a nice and good neighbour in every sense of the word. He is a human who has no fortune nor money, he is a simple and normal human,” he added.

The raids hit a depot housing mattresses and blankets collected from humanitarian organisations, he said. Also hit were solar panels for a water pump belonging to a local farmer.

During the strikes, the Shalool family was trying to get out of their home and flee. “His wife and daughter fled to our home and survived,” said the neighbour.

The neighbour told our reporter: “This aggression has no mercy for adults or children nor distinguishes between a civilian or a military site.”

Asked his opinion on British government support for the Saudi coalition, he commented: “They do not care for people’s lives. What is important for them is money and selling weapons. If Yemenis are being shelled or killed, it’s all right, never mind.”

A spokesperson for the Saudi-led coalition claimed that the airstrikes targeted a workshop containing drones and Katyusha rocket launchers.

Another eyewitness, a local of the area, disputed this claim. “They are liars,” he said. “It was a water tanker project and a garage of shelter supplies like mattresses, blankets, and kitchen tools.

“Whatever the target is, they always say it’s a military target, even if it was a home, they say it is a military site.”

Another local person told our reporter that the depot contained humanitarian supplies stored by the Houthis. Our reporter said the only military site he saw in the area was a checkpoint some 150m from the depot.

The owner of the key shop, who goes by the nickname Abu Majed, told our reporter: “If you want to bombard Houthis then stop bombing civilians. Here we have only maintenance workshops of cars, shops, the largest market for vegetables in Saada and people looking for a job to make a living.”

Sitting with his three children and an employee, he added: “If I knew there were military sites here, I would not have opened a store here…There is only a police checkpoint.”

Asked if his children are affected by the bombing, he replied: “All of them have fears and trauma. This boy,” he says, referring to his 5-year-old son, “was in his mother’s belly while warplanes bombed during the early days of war and was born during bombing. Now, when he hears aircraft, he runs away immediately.”

He says his children were too scared to come back to the shop for a week after the bombing.

Another of Abu Majed’s sons, 16-year-old Abdul Rahman, recalled: “The airstrikes were carried out while we were about to close the store and return home. We thought it could be a car exploding. I looked from the door on the street and saw people run away and flee. I fled to the store and saw a woman with two children and a man.”

He added: “We hid by the store building. One of the two children escaped toward the street, just as we heard the third explosion. Some shrapnel landed near the child. I went to take the child and get him back to his parents near our store and then heard the fourth explosion.”

“I have smelled death,” he added. “They want to destroy Yemen.” DM

Thabo Molelekwa for Spotlight • 7 mins ago