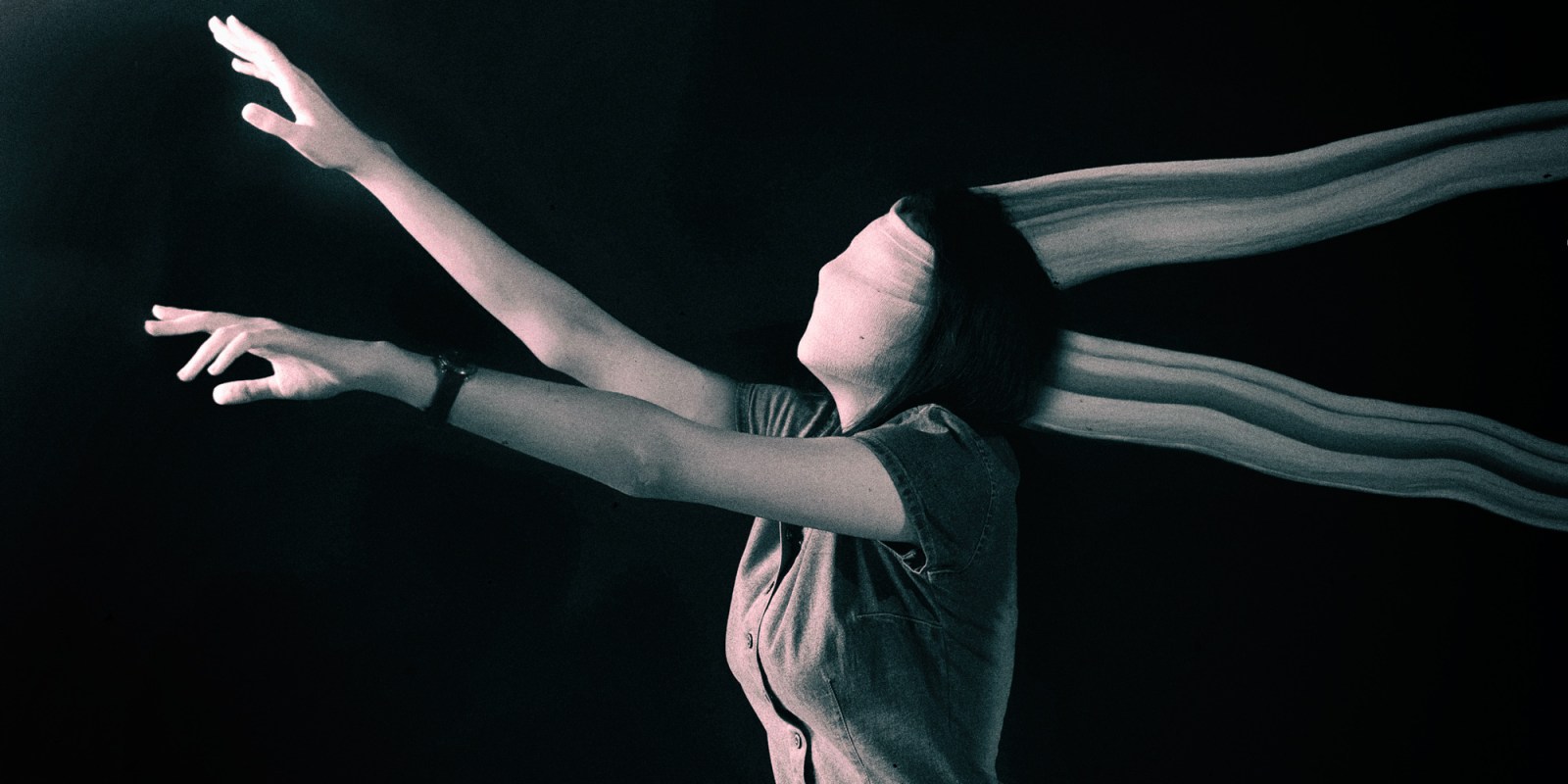 A crisis such as the Covid-19 pandemic creates a perfect opportunity for those who wish to cause confusion, chaos and public harm. Misinformation and disinformation enables them to do just that…

Over the past seven weeks, we have analysed disinformation trends which have largely focused on Covid-19. The seventh brief analysis looks at the type of complaints reported to the Real411 platform during the week of 5-12 July 2020. Previously, we have seen a number of complaints that deal with content found on various social media platforms, ranging from conspiracy theories, scams, hoaxes, confusion, deliberate encouragement of non-compliance to regulations, and simple politicking around issues related to the pandemic.

The word cloud above shows us which key issues have dominated the complaints received on the platform (since about the middle of April). These topics rely on the “tagging” of complaints as it goes through the process of review, and the tags determine the topic. Therefore, this is a dynamic topic list, depending on complaints-reporting to the system. We see “Covid-19” dominates the topics, followed by xenophobia, lockdown, conspiracy theory, anti-vaccination and #PutSouthAfricansFirst. This is a small window into the nature of mis and disinformation spread across our social media platforms.

The Real411 platform accepts complaints related to a variety of digital offences, including hate speech, incitement, harassment of journalists and disinformation. The platform has been fully operational since 22 March 2020, and since, we have seen some dangerous disinformation circulating across our social media platforms. Complaints have been submitted to the platform and action has been taken, often resulting in counter-narratives becoming issues, or content being taken down. From 22 March to 12 July, 559 complaints have been received, 539 of which have been assessed and resolved. 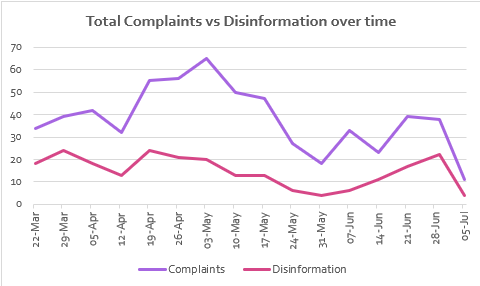 Looking at specific complaints, what have we seen in the past week? We take a look at the nature of complaints received on the platform between 6 and 12 July 2020. 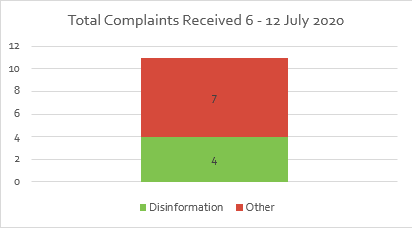 This graph shows a significant decrease in the number of complaints received during the reporting period. Eleven complaints were submitted, of which four were ruled as disinformation.

Each complaint submitted is assessed by three reviewers – each an expert in their fields, including media, tech and legal. Once a complaint is assessed, it is sent to the secretariat (who is a media lawyer), and a final determination is made and further action is recommended, if necessary.

In our weekly analysis, we also take a look at where the complaints originate from — in other words, where instances of alleged disinformation have been found and complaints submitted. 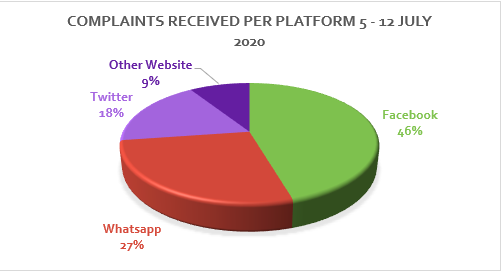 WhatsApp, Facebook and Twitter continue to be the main platforms where disinformation is being disseminated, according to the complaints submitted. This week, most complaints originated from Facebook (five). Twitter, which over the last few weeks has been at the top of this graph, is now the lower of the top three.

This week we have received complaints related to microchips, mass graves and a peculiar complaint about wearing masks and having your temperature taken said to be part of pagan rituals. We take a closer look at each complaint below.

Complaint #607 is about a video circulated on Facebook, where the creator explains how the government will start inserting microchips into humans. Based on the evidence available it seems these are more likely animal microchips, similar to those used to ID a pet. This type of content continues to instil fear and creates distrust between the public and government. This is a classic case of disinformation.

The next complaint, #611, relates to information being shared containing two types of disinformation. The first is that the image is purposefully taken out of context (originally taken in Brazil, not South Africa) and second, the claim that 1.5 million graves are being prepared in Gauteng. The Gauteng Department of Health has clarified Gauteng health MEC Bandile Masuku’s comment on Wednesday 8 July that “1.5 million graves were being prepared”, by releasing the statement: “The province does not have over a million already open dug graves, the over a million graves refers to the collective capacity municipalities can take.”

The final complaint we want to highlight this week is a bizarre one related to Covid-19, regulations, compliance, and includes a more unique spin, religion. Complaint #612 deals with the Facebook post that states that wearing masks and having your temperature taken form part of satanic and pagan rituals. Apparently there have been a number of posts making similar statements, posted by the same person. One of the key issues with this type of disinformation is that because it is shared on public groups, it encourages fear and uncertainty among people who possibly already distrust the clear public health regulations.

Despite the lower number of complaints over the period, similar themes persist. We have the denialists, who say it is all made up, we have the conspiracy people who argue it is all about the government/the Chinese/Bill Gates/evil others using the virus to control us and our lives. We also have those who seek to make it somehow seem as if the government is hiding stuff from us, about how bad it really is. The last group are curious, as there is already so much out there it’s hard to imagine how much worse things could actually be.

One issue that is especially perplexing is, if you believe any of the above, what then? For those of us who like to adhere to science, rationality and a healthy dose of scepticism, we rely on the media and others to inform us of what’s going on. We can use that to inform our own decisions.

For example, we see the number of positive Covid-19 cases in South Africa escalating significantly, and we seek to take precautions to help prevent the spread and keep loved ones safe. If you believe any of the above theories, where does it lead you?

Say we believe that actually the virus is just made up for whatever reason, what then? Are we meant to just sit and moan about how bad it is, that we can do nothing but be controlled?

If it is about controlling us by evil groups, are we meant to gather with like-minded people and plan a revolution, and if so, against who?

The tricky thing with these conspiracy theory pushers is that it really isn’t clear if it is the Chinese, the Evil West, Bill Gates or our own evil government who are trying to control us or if it is all of them together. So, even if we plan to do something, who do we target? Is Gareth Cliff in on it, or is he on our side?

These approaches tend to offer more questions than answers, and perhaps to that extent they are indicative of legitimate fears and anxieties that we all have about where things are going. Of course, this is a fundamental betrayal of the whole point of these theories to begin with, as they seek to offer us simplistic answers to really hard issues. It would be easier to deal with our reality if we could just say it is all the evil XYZ. It gives us a focus for blame and says it is all their fault.

It’s one reason why offensive ideas like Trump’s “let’s build a wall to address immigration issues” has traction – it offers a simple solution to deeply complicated challenges and issues. The reality is, of course, a lot more messy and complicated and there seem to be few paths forward that offer any certainty.

Faced with our reality, it is tempting to want easy answers, but there don’t appear to be any. Instead, we must keep on going, learning, trying, erring, and moving.

What’s imp0rtant is how we do so, and there we do at least have clear guidance and answers in the form of our Constitution which prefaces equality and dignity. As much as we may feel anxious, we can all strive to act with kindness and compassion, and choose the path that will build a more just equitable and dignified world.

Combating disinformation is the path of greater resistance, but it is also the path to a more democratic future. DM