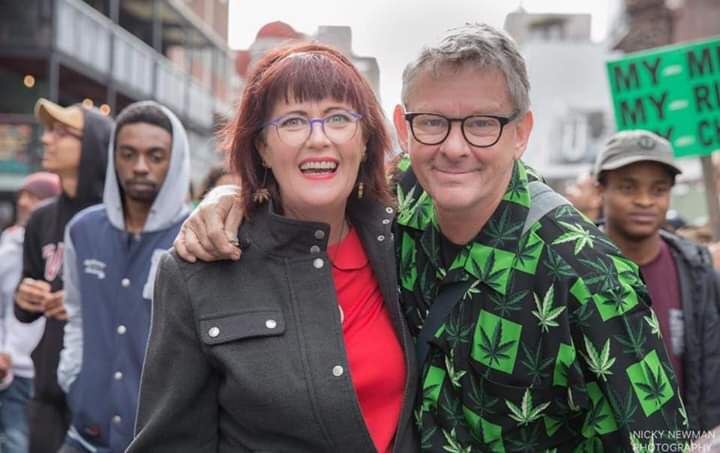 In the early hours of the morning of 3 July 2020, Jules Stobbs of The Dagga Couple was shot and killed in the bedroom of his beloved Jazzfarm, where he had been sleeping alongside his life partner Myrtle Clarke. In her tribute to Jules, delivered before a throng of mourners on Saturday 18 July, Myrtle spoke of the loss to herself and the cannabis activist community. Jules taught us how to disobey bad laws, she reminded us, and in the process gave us legal access to cannabis through the highest courts in the land.

Thanks to everyone for being here with us today. Those who are here at The Jazzfarm and those joining us in South Africa, the rest of our continent and around the world. If circumstances were different, I know that we would also be joined by all the communities we love and I feel the presence of each and every one of you – our gogos, Rastafari brothers and sisters, Julian’s family in the UK and our thousands of friends across South Africa and the world.

It has been a helluva thing to put together something to say about the man I have loved for the last 15 years. Our home here at The Jazzfarm and our Jazzfarm Social Club have been the backdrop for our wild, creative pursuits and our life as The Dagga Couple and Fields of Green for ALL. At the core of everything has been our deep love for each other, our families, friends and fellow activists, creatives and crazy people getting by in a mad world.

Jules was shot and killed wearing this T-shirt, “Good people disobey bad laws”, which was the essence of Jules, the man. He was outspoken and didn’t suffer fools. People have been reminding me of things that he would say, so I have decided to share three important messages Jules was always been at pains to get out into the world. Underlying these three is his message to “always tell the truth”. Because then you don’t have to remember what you said.

Paul-Michael Keichel, our lawyer in the Trial of the Plant, has spoken about cognitive liberty and how this concept has always been central to what we do. Jules often expressed his deep anger at how those in power lock us out of our minds. Julian and I would never have been able to do what we do without the wisdom of our plants. Our beloved cannabis, indigenous healing plants, vines and leaves from distant jungles and teacher plants from deserts, mountains and plains across the world.

In the last two weeks of intense shock, I have found warmth and comfort in cannabis and tobacco and drawn on the wisdom of nourishment provided by all our years of plant teachings. Julian and I created something by tapping into so many different communities who provide inspiration, expertise and deep love. Those who make the laws know nothing of the power of the plants and the destruction that their ignorant laws cause. Our governments are locking us out of our own minds.

Jules had a very deep hatred for his ancestors and the enormous destruction they caused across Africa, “the colonial fuckwits”, as he used to call them. When we were arrested in 2010 and decided to take on the South African government in court, Jules got a certain satisfaction from knowing that he was playing a small part in making up for the terrible legacy of his English ancestors.

Corruption and the extreme poverty that resulted from it killed Julian. It takes a lot to be a good person and try to make the world a better place. It also takes certain skills and education. When we came home from the United Nations in March, Jules was very angry. What you experience in those hallowed halls of power is a deep, deep divide between civil society and the delegations from the member states. Julian used to say: “The difference between them and us is that all we want to do is make the world a better place and all they want to do is control us.”

In the 10 years we have been activists, we have never, ever been acknowledged by government in any meaningful way. In fact, we are still fighting in court. Why must civil society spend enormous amounts of money trying to be heard? We are the experts and this is the space where you will hear the clever, the motivated, the poor and the persecuted. We are sick of begging you to listen. We have the answers.

Our biggest fear is that you will capture our cannabis, invade our homes to count our plants and continue to persecute us so that you can hold onto your power and control and buy your fancy cars with the proceeds of our pain.

All Julian ever wanted to do was make the world a better place. Our mission together has never been ventured around the good of the plant. It has always been about the harms of prohibition.

Our fight is not over until I walk out of the Krugersdorp magistrate’s court with a thousand rand in each hand – one for me and one for Julian.

Jules and I went on a crazy 15-year adventure. It was never all about cannabis and I am proud to say that we jumped at every chance to explore the limitless possibilities of life.

In the end Jules was shot and killed for his laptop, but the T-shirt says it all. I will not give up as we love each other to the end of beginningless time. DM

The Dagga Couple, or DC, is a pro-cannabis lobbyist organisation from South Africa founded by Julian Stobbs and Myrtle Clarke after the two were arrested for possession of and dealing in the substance in 2010. Rather than plead guilty, the couple decided to sue seven sectors of government that maintained and enforced the policy of cannabis prohibition in the country, resulting in what has been described locally as the Trial of the Plant in 2017.