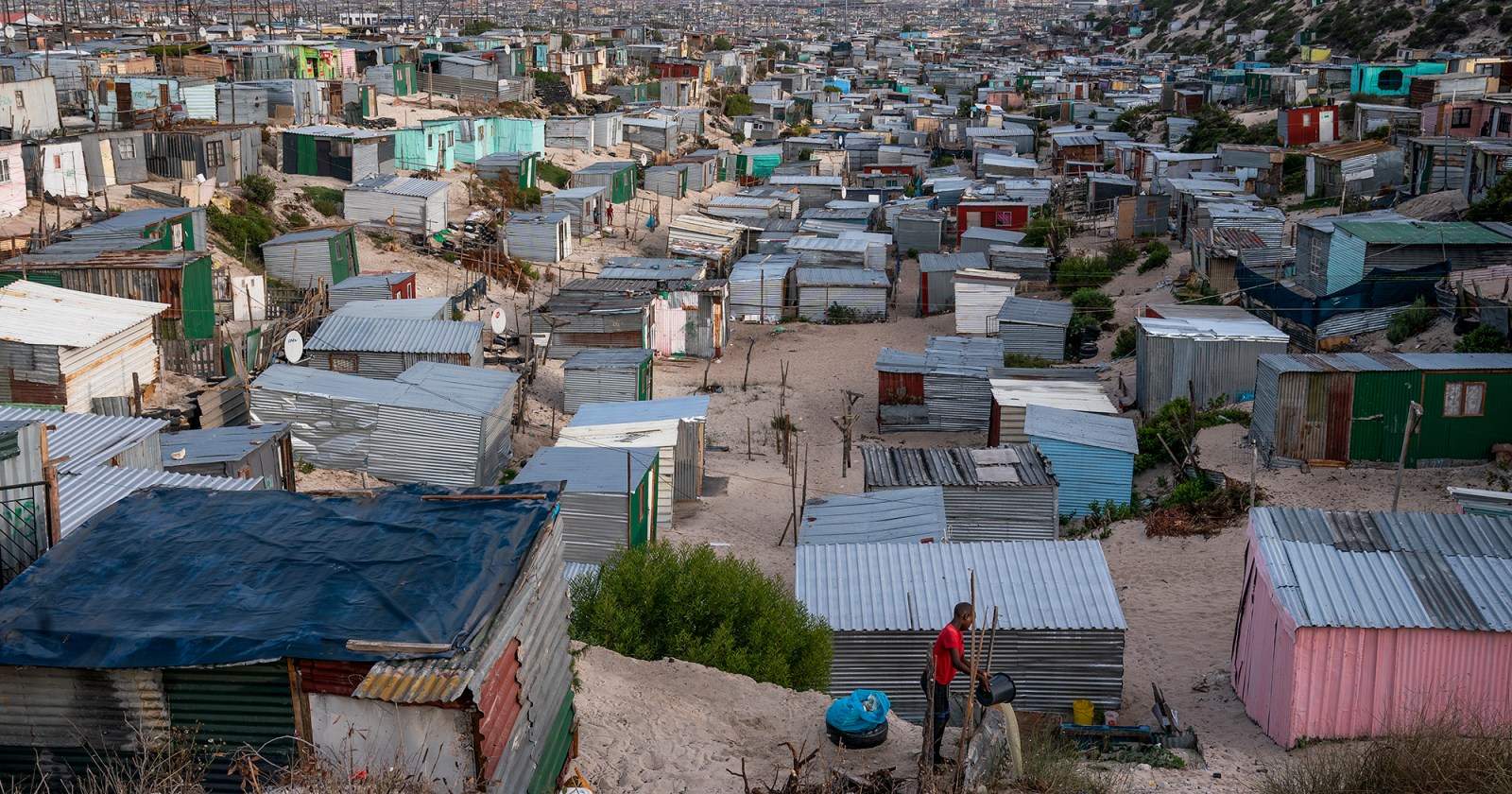 A boy discards waste water next to his shack in the densely populated township of Khayelitsha. (Photo: EPA-EFE / Nic Bothma)

Resettling informal communities is not an option because of the damage it causes to livelihoods and social networks. A better approach is for communities to take advantage of the impermanence of makeshift structures to reposition shacks to create space for basic services. This type of re-blocking can be achieved with limited or no relocations.

Dense informal settlements pose an extreme risk to the spread and control of Covid-19. The standard protocols of “physical distancing” are almost impossible for people living in small shacks who must share water and ablution facilities with their neighbours in communities as dense as Hillbrow, but more crowded because everything happens at ground floor level.

The concern about the impact of overcrowding on the pandemic is probably what lies behind the novel focus on the spatial configuration of informal settlements in the ANC’s plan. Yet such attention still has the potential for a significant “reset”, i.e. to achieve a far more positive outcome than originally intended.

The government’s response to informal settlements has always been ambivalent and reactive. A clear and progressive national policy framework exists, but implementation has lagged far behind. The main focus until now has been on providing the bare minimum of services mainly through partial electrification, communal standpipes and shared ablution blocks.

The implicit justification for not thinking about the long-term future of these places is that communities should wait their turn to receive Reconstruction and Development Programme/Breaking New Ground (RDP/BNG) housing (inevitably somewhere out on the periphery), even though this could take several decades.

The informal settlement “backlog” is bigger now than in 1994 despite the scale of formal housing delivery. At the worst, a lack of municipal investment reflects a decision to ignore their existence. In the meantime, informal settlements continue to expand and densify, which compounds the hazards associated with their spontaneous urban form.

It is important that a proactive approach to informal settlement upgrading goes beyond the provision of basic services and addresses the deeper issues of congestion, contagion, pollution, fire and environmental hazards, tenure and related political insecurity. This is why the spatial reconfiguration, or “readjustment”, of informal settlements is vital.

Reconfiguring space and scaling up the quality of investment in informal settlements is ultimately good for everyone – not just shack dwellers. It would arguably make the entire city more economically productive, socially inclusive, safer and equitable. This would bolster the formal, and informal economy and help mitigate long-term poverty, unemployment and inequality which is a drain on the fiscus.

Land is a binding constraint on any urban development. Urban planners are responsible for regulating its use and striking the right balance between residential, commercial and public needs. Basically, the density of the population needs to match the capacity of public infrastructure, so that roads do not get congested, the services grid does not become overloaded and people have access to basic services as well as public facilities such as schools, clinics and parks.

A better approach is for communities to take advantage of the impermanence of makeshift structures to reposition their shacks to create space for the installation of basic services within the settlement such as sanitation, clean water, fire hose points and other utilities while also opening up space for communal courtyards and play areas, and limiting the spread of fires.

The spontaneous urban form of most informal settlements means there is not enough room for investment in the public realm, even though high population thresholds warrant their provision. It is this mismatch between private space and public space (including public investment) which is a handicap to the all-round development and transformation of informal settlements in the long run.

There are no easy answers to the shortage of land in dense informal settlements. The possibility to “de-densify” some of these settlements (i.e. through relocations), originally raised by the Department of Human Settlements at the onset of the Covid-19 crisis, was strongly rejected by a coalition of practitioners and civil society groups citing the many negative social, economic and political consequences. The United Nations and other international organisations strongly discourage governments from resettling informal communities because of the damage it causes to their livelihoods and social networks.

A better approach is for communities to take advantage of the impermanence of makeshift structures to reposition their shacks to create space for the installation of basic services within the settlement such as sanitation, clean water, fire hose points and other utilities while also opening up space for communal courtyards and play areas, and limiting the spread of fires.

This type of re-blocking can be achieved with limited or no relocations. Internal improvements can also help address the connectivity of the settlement with the rest of the city through improved transport and communication infrastructure. This helps strengthen residents’ social and political inclusion, which will positively contribute to the overall development of the city.

The process of reworking space within settlements has sometimes been criticised for being top-down and resisted by local communities, particularly when it has been government-driven. It takes a lot of trust and goodwill for communities to reach the necessary compromise and consensus to reposition the layout of their shacks. Most examples of re-blocking have taken place after disasters such as fires or flooding and the opportunity exists to start from a “clean sheet”, at least in theory.

However, there are a growing number of proactive cases where solutions were successfully co-produced, such as the restructuring of Mshimi Wam (Joe Slovo Park, Cape Town), led by Shack Dwellers International. Communities can play valuable roles in assembling essential information and knowledge about the locality, gaining local support for the idea and formulating practical proposals for the way forward. There are also opportunities to acquire useful skills that may generate livelihoods in the future.

Our own research in Parkington Informal Settlement in eThekwini looks at how more space can be created through expanding settlements vertically. Alternative building typologies are available that could allow for the incremental addition of another storey (i.e. multi-storey timber frame top-structures) and which make use of materials and methods familiar and affordable to locals.

Achieving a more sustainable future and urban form for dense informal settlements will never be straightforward because of the limitations on space, inadequate human and fiscal resources, contestation around tenure and instability within poor communities.

A key issue is how to rationalise the basic layout of the settlement to allow for the installation of a services grid and eventually enable individual service connections. Individuals could then gradually consolidate and improve their private housing investments over the public infrastructure grid, as their incomes permit. Municipalities and NGOs could support this self-build housing improvement process with advice and training, and subsidised building materials. Granting people greater security of tenure would give households added incentive to upgrade their shacks into more permanent and robust structures.

This agenda could be even more ambitious by unlocking the most valuable sites within each settlement for disposal to other uses (such as small commercial centres or shops), to help pay for the public infrastructure and related facilities within the settlement. International good practice suggests that this is viable and worth pursuing where the location attracts a premium. The process can be launched by creating partnerships involving the main stakeholders – the local community, landowners, public organisations, NGOs and the private sector.

In reality, the process of land readjustment might begin as partial and focused on establishing the main service access ways. Such an initial response would be less resource-intensive and therefore more scalable, and would establish an important platform upon which re-working and consolidation of inter-blocks could occur, i.e. by breaking the settlement up into smaller, more accessible blocks.

Getting the process of re-blocking going would mean addressing a number of barriers to informal settlement upgrading, including the funding of essential services on private land, the application of reasonable by-laws under the Spatial Planning and Land Use Management Act, municipal budgeting for ongoing operations and maintenance of service infrastructure, and accommodating alternative and affordable housing typologies that follow defensible building design principles.

Creating flexibility in the regulatory environment is important to enable local participation, adaptation and creativity. Greater experimentation should be encouraged to learn from different techniques and approaches. Municipalities have a vital role to play in enabling the process, streamlining approvals and accelerating the provision of essential infrastructure.

Achieving a more sustainable future and urban form for dense informal settlements will never be straightforward because of the limitations on space, inadequate human and fiscal resources, contestation around tenure and instability within poor communities. A bottom-up, community-driven process of spatial reconfiguration and upwards expansion is unprecedented in South Africa. Progress starts with a change in mindset from politicians, public officials and city residents that informal settlements are here to stay, and are worth investing in for the good of everyone.

The call for informal settlements to be spatially reconfigured or restructured is a welcome step in moving the upgrading agenda onto a longer-term trajectory of transforming human settlements. DM

Dr Justin Visagie is a research specialist in the department of Inclusive Economic Development at the Human Sciences Research Council. Dr Andreas Scheba and Prof Ivan Turok work in the same unit. Mark Misselhorn is the CEO of the Project Preparation Trust with years of experience in informal settlement upgrading.