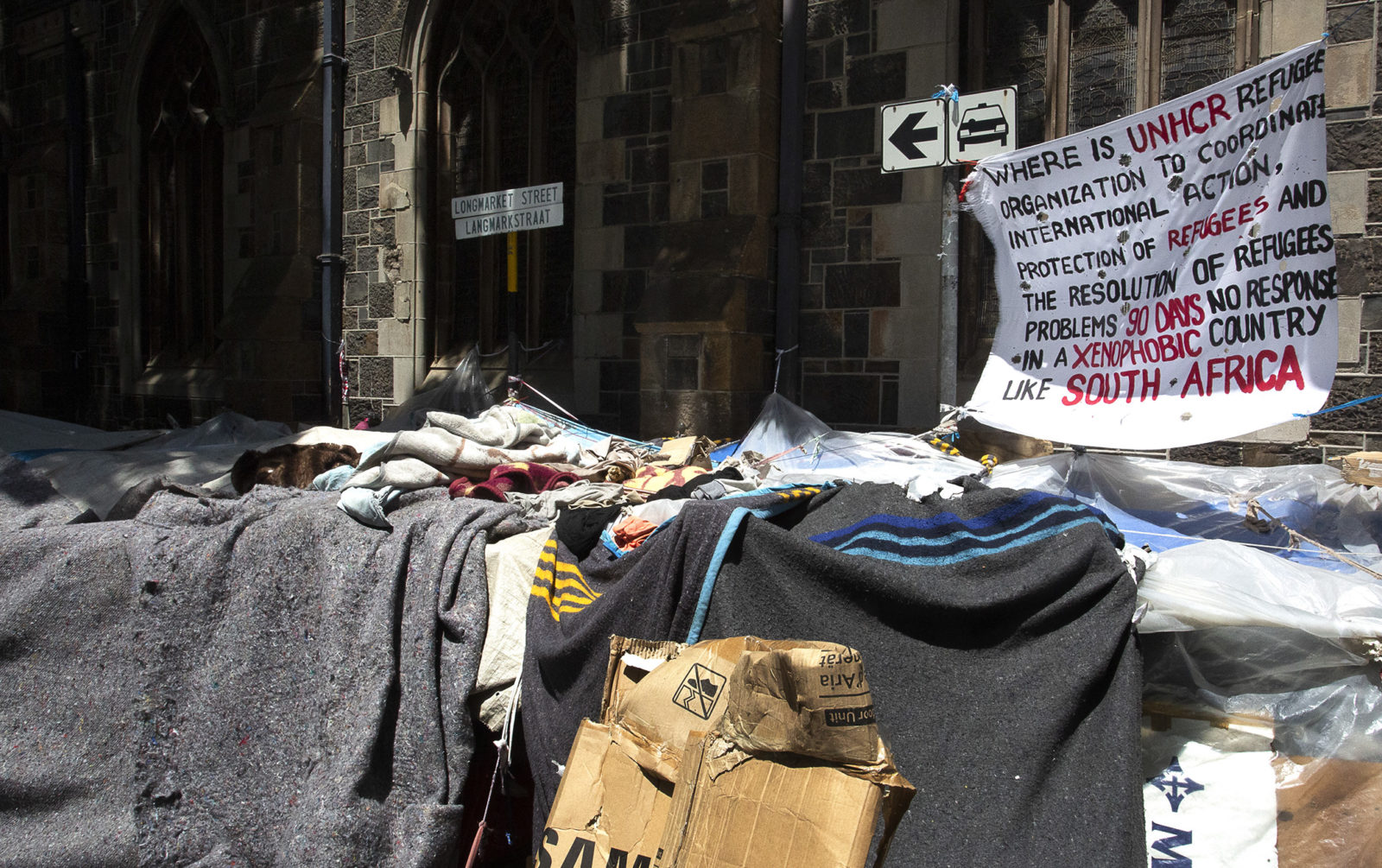 In recent weeks there have been new threats against black African migrants living and working in South Africa. The hatred and accusation directed by xenophobes against refugees and migrants pays no heed to the stories and lives of non-South Africans living in our country. In this article, I want to tell you a bit more about our histories, how we came to be here and how we bleed and suffer at the hands of those who vilify us. I will start with the story of an Eritrean refugee, Kidan Hagos. Tomorrow I will tell you my own story.

Eritrea, East Africa, with a population of around six million, shares a border with Sudan, Ethiopia and Djibouti. Asmara is the country’s capital city.

Since gaining independence from Ethiopia in 1993, Isaias Afeworki was the first, and current, president of Eritrea. He is one of the leading dictators in Africa.

Only four religions are officially and legally recognised: the Eritrean Orthodox Church, Sunni Islam, the Roman Catholic Church and Evangelical Church of Eritrea. Other religions are illegal in Eritrea. If you are caught worshipping or attending a prayer service outside those four religions, you will be detained and thrown into jail for the rest of your life.

The story of Eritrean refugee Kidan Hagos, 26, is one that must be told.

Avoiding arrest and in fear for her life, Kidan fled to South Africa in 2012. She had lost her mom at a very young age. After serving in the military for seven years, Kidan’s oldest brother sought freedom. He was killed by soldiers while trying to cross the Sudan Border.

Kidan was living with her dad and two elder sisters. When she was 15, Kidan and her two elder sisters were arrested by military forces while attending a church prayer in one of Pentecostal Christian churches in the capital city, Asmara.

Over the course of six months, Kidan and her sisters were raped by the prison guards. After their release and to avoid further arrest, Kidan decided to live with her aunt in Massawa, the port city of Eritrea. After a year, she went back to Asmara because her sisters had to join the national military service. Military service is compulsory for all Eritrean citizens between the ages of 18 (but in most cases 14) and 40, regardless of gender. The duration of military service is indefinite.

Once her sisters were gone, Kidan was the only one left to look after their father. After 16 months, she was also dragged from home by security forces to serve in the military. She had to endure two long and difficult years of service, without any communication with her father or sisters. After Kidan was informed that her father had died, she was finally given two weeks off to mourn his death before having to return to duty.

The decision to flee

It was during these two weeks that Kidan decided to flee the country by any means necessary, because she believed it was the only way that she would stay alive.

It was almost impossible to fly directly from Eritrea at her age. Kidan managed to contact her aunt and her husband who, using connections, helped her get a passport. They also helped her cross the Eritrean border by giving her some money to bribe border security personnel.

She arrived in Khartoum, the capital of Sudan, after four long days and nights of walking across the bush along with other escapees. With her difficult situation and her young age, other escapees helped Kidan obtain a visa and gave her roughly $300.

She then took a flight to Nairobi, Kenya.

Kidan met one of her elder sisters’ friends who had lived in Kenya for four years and stayed with her for two months. She was arrested in Kenya and detained for two weeks because her visa had expired and she had no other documentation.

After her release, she was out of money and had no means to survive. The woman with whom she had been living with told Kidan that she and four of her friends were planning to seek refuge in South Africa and that Kidan should join them. She agreed. They headed to Tanzania by bus.

They stayed in Tanzania for 11 days in a rural shelter and met agents who helped them to get to Zambia. After their arrival in Zambia, Kidan became very sick.

They stayed in Zambia for two weeks in a room organised by the agent. The agent took all the money they had because he said that he had been feeding them and had paid for the house. They were then forced to walk for eight days and nights to get to Zimbabwe.

They were luckily able to meet with another agent who happened to know one of them from back home. He communicated with one of his colleagues in South Africa and was told to wait for them by the Beitbridge border. He helped them cross the border into South Africa. The agent drove them, in a minibus taxi, to Mayfair, Johannesburg.

At the age of 19 and after a long and hard journey from Eritrea, Kidan arrived in South Africa in March 2012. On their second day in the country, Somalian refugee communities living around Mayfair gave them food, clothes, some money and two rooms to share.

After a week, Kidan and her sister’s friend went to the Department of Home Affairs in Pretoria to seek asylum. Unfortunately, the lines were very long. Officials were only helping people who offered bribes to skip the long queues.

For the past eight years, Kidan has lived with the same asylum permit. She has to travel to Pretoria to renew her permit every month (or every three to six months depending on what extension officials decide to give her).

Kidan worked in one of the Somalian restaurants in Mayfair for six months before she got a waitressing job at an Ethiopian restaurant in Port Elizabeth with a monthly salary of R3,000.

In 2014, Kidan met her husband and she started working with him in his spaza shop. They once went to the bank to open an account, but the bank refused because they were (and still are) using an asylum permit. The bank told them that they could only open an account with a refugee ID.

In May 2016, their shop was robbed. Her husband was stabbed to death in front of her and their two-year-old daughter. Kidan was traumatised and sick for several months.

Since she had to take care of the daughter, she decided to look for a job and began working as a cook in the same Ethiopian restaurant where she had worked as a waitress, but this time she earned a monthly salary of R4,000.

She rented a room for R2,500 a month and paid R1,200 a month for her daughter’s schooling until the nationwide Covid-19 lockdown.

After the Covid-19 lockdown

Since the restaurant was closed, she had no source of income to pay rent and support herself and her daughter. During the lockdown, she did not get any help from the government or from any organisation. The only help she received was from a few friends who helped her with groceries. She has been trying to reach her sister’s friend, Sara, who lives in Durban, but because Sara is in a similar situation, she could not help Kidan.

Since banks do not allow her to open an account because of her asylum permit, she decided to apply for a work permit. In 2019, she visited the Eritrean Embassy in Pretoria to apply for a passport. Unfortunately, she was told that she could only get her passport after she paid eight years of taxes to her home country, Eritrea. You can imagine how much that will be.

She tried to explain her situation to the embassy, but no one listened.

It is actually no surprise that in Eritrea there is no opposition party. There has not been a national election since 1993. This is the country that most of us refugees come from. This is the life that we survived while we were there and managed to escape from.

Since her arrival in South Africa, Kidan has tried to reach her sisters many times. Unfortunately, she cannot get any useful information — other than rumours that they are still in military service and there is no way they will be able to communicate with her.

Kidan says life is very tough for refugees in South Africa and it is difficult to survive. She is in a worse situation after arriving here and has even considered going back home, but her friends advised her that if she returns to Eritrea she will be detained and eventually thrown into jail on two counts. One for escaping from her military service and the other for her religious beliefs as Pentecostal.

So now she lives with the worst of all worlds.

Let us stand together. Let us take action and let us say it louder! #Refugeelivesmattertoo. DM/MC

Eyasu Mengistu is not the writer’s real name. She is a refugee afraid of the consequences of speaking in her own name. Maverick Citizen knows the identity of the writer.

* On Friday a new webinar series, Building Solidarity in the Time of Covid-19, will explore issues of migrancy and inclusion in the Covid world. 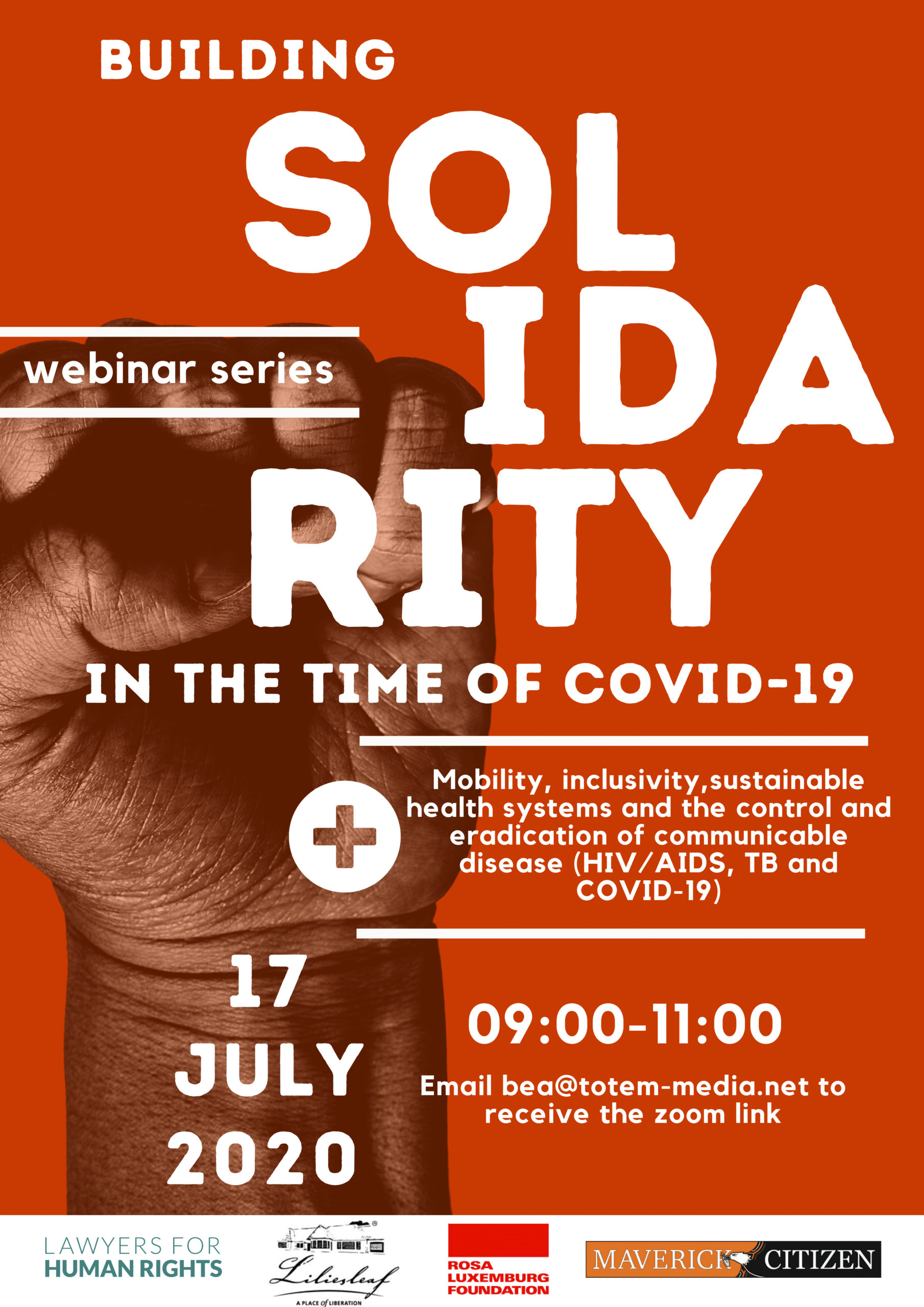 The webinars are jointly presented by Maverick Citizen, Liliesleaf, Lawyers for Human Rights and the Rosa Luxemburg Foundation. The idea for the series arose from conversations between these partners about seeing this time of Covid-19 as not only a time of severe crisis, but also a time of opportunity. One of these opportunities is to rekindle old notions of solidarity between people and, importantly, between countries in southern Africa.

The webinar series is focused on the impact of, and policy responses to, COVID-19 on foreign nationals (refugees and migrants) in South Africa. According to the organisers:

“It is one thing to harness moral outrage, but another to shift thinking and effect structural change. We have to go deeper than simply addressing the surface manifestations of xenophobia, and have to challenge not only the government’s response, which varies from reactive, unjust and unconstitutional to corrupt, but also those from business and civil society in general. We have to move away from a situation where migration is kept on the edges and treated as a silo rather than integral to modern society and all issues of governance and rights.”

The webinars will situate migration as an international phenomenon that is not going to stop. In fact, it is going to accelerate. We have to plan for it, not be in denial about it and think we can manage it through repressive means. How are progressive states – which we claim to be – planning for migration in the region?

Kathryn Cleary for Spotlight • 12 hours ago