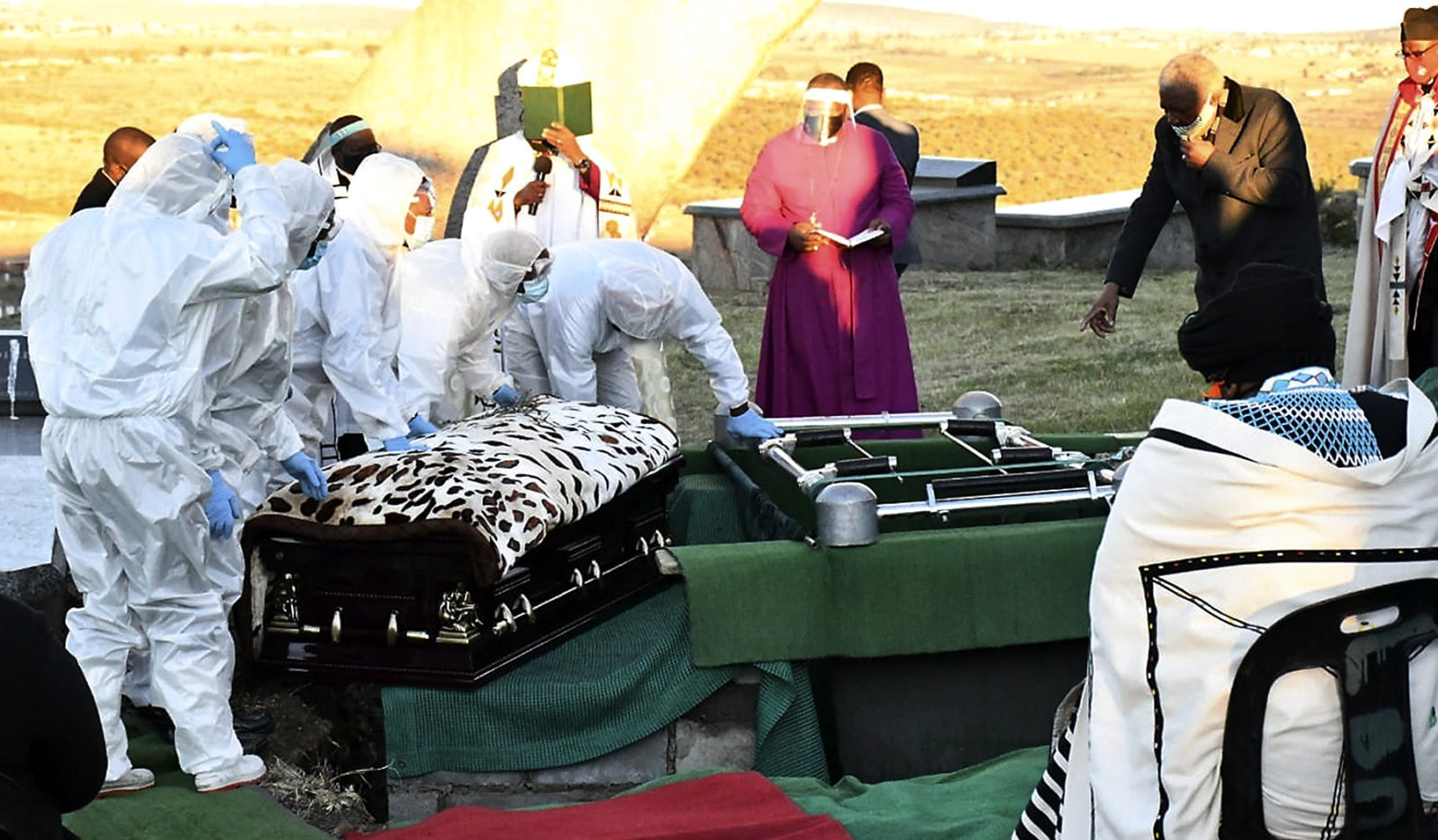 The limits on funerals have led to rising tensions, especially among those for whom funerals carry significant traditional weight.

A health and safety officer was attacked. A coffin was forcibly taken into someone’s home. Violent disagreements have broken out between families and undertakers. All this and more is happening around South Africa as frustrations erupt over disaster regulations governing funerals.

The South African government has clamped down on funerals – limiting attendance to below 50 people – in an effort to curtail the spread of Covid-19 among mourners.

This has led to rising tensions, especially among those for whom funerals carry significant traditional weight.

A municipal health official had to flee for her life in the Eastern Cape town of Cacadu after she tried to limit the number of mourners at the funeral of a man who had died of Covid-19.

Wongama Gela, executive mayor of the Chris Hani district municipality, confirmed that an environmental health official was assaulted while trying to ensure compliance at a funeral in KuNdonga in the Cacadu district.

He said the widow of the deceased man, who died of Covid-19, approached the official to ask for guidance about the funeral service.

“Working with the funeral parlour, the official identified non-compliance issues which posed a serious risk to those who were present and their prospective contacts. These related to complete disregard of social distancing by church members, attendees who exceeded the regulated number, poorly constructed graves with inadmissible material and demands by the family to see the sealed body.”

“The distraught official had to abandon the site following insults and a chase by an angry mob, where her phone was also allegedly confiscated. We extend our immense gratitude to the funeral parlour officials who tried to calm the situation, recovered the phone and rescued the official. Police were dispatched to the area and a case of assault will be opened with the Cacadu police.”

Lonwabo Kowa, a spokesperson for the Enoch Mgijima municipality based in Komani, said they had an incident in Ilinge township where families forcibly took the coffin of a person who had died of Covid-19 into their house, even though this is not allowed.

Nonceba Madikizela-Vuso, spokesperson for the Amatole district municipality, said there have been incidents of families having heated disputes with funeral directors over their loved ones’ cause of death – where the cause had been certified as Covid-19.

Last week, while announcing a new ward-based strategy to fight Covid-19 in the province, Eastern Cape premier Oscar Mabuyane said that attendance at funerals will be restricted to direct family only. He also said it was compulsory for all bodies in the province to be tested for the virus. The premier’s spokesperson, Mvusi Sicwetsha, said the issue is that families who do not know that their loved one had Covid-19 can put themselves at risk when they bury them.

“From the hospital, we want to indicate that this person had Covid-19 or not, so that the manner in which bodies are handled is done as per the precautions to prevent infections.

“When people bury their loved ones without knowing, they get exposed to infections. Also, those who assist with funerals, like funeral parlours and the clergy, get exposed. It helps us and the families to know so that they handle the bodies better. After every funeral the government is required to test village communities. We want to change this,” he said.

While several funeral directors have complained that it takes them up to five days to get a death certificate from the Department of Home Affairs, the provincial manager for the Eastern Cape, Gcinile Mabulu, said any delays are caused by offices having to close because an employee tested positive for Covid-19.

“Death certificates do not take long to be issued at any home affairs office. We have a special queue for death registration, and if they have the proper documentation, a death certificate is readily issued to the client. The only delay will be to wait one’s turn in the queue,” he added.

Mabulu said their East London and King William’s Town offices “are typical offices that experience such eventuality [closing as a result of infection]” because they fall within the epicentres of outbreaks in the province.

“As they often undergo numerous unfortunate closures, the Mdantsane local office remains the only office to help with death registration.

“Of course there are also offices at Stutterheim, Keiskammahoek and Alice. The inability of anyone to reach out to these offices, and the protracted delays opening offices, may be construed as failures of home affairs – but they are not,” he said.

On 20 June in Ngxotwe village, an elderly man forced his way through the funeral procession to open the coffin. When they realised they had been given the wrong body, the family chased the hearse away.

According to a presentation by the head of the Eastern Cape health department, close to 200 of the earliest cases of community transmitted infections in the Eastern Cape were linked to funerals. During Level 5 and Level 4 lockdown, a number of “imported cases” were registered after people travelled to the province to bury their loved ones.

Traditional leaders this week asked for more consultation on funeral regulations, saying they are receiving many reports of families burying the wrong bodies. In terms of health and safety regulations, the bodies of those who died of Covid-19 are secured in a bodybag at the hospital and not taken to the family home for viewing or for any death rituals to be performed.

Many have expressed their concern that in 20 to 30 years’ time, families will be haunted by the ghost (soul) of their loved ones as they buried the wrong corpse.

In Cofimvaba, the Sigamlele family buried a body that was meant to go to a family in KwaZulu-Natal. In Nxotegwe village near Qumbu, the Nongwe family also buried the wrong person, as did the Mpu family in Zimbane Valley, Mthatha.

On 20 June in Ngxotwe village, an elderly man forced his way through the funeral procession to open the coffin. When they realised they had been given the wrong body, the family chased the hearse away.

The chairperson of the Vukasizwe organisation based in Ngcobo, Chief Jongisilo Phokwana Menziwa, confirmed the incidents, saying people feared the haunting of souls for burying the wrong body.

He said the current Covid-19 regulations should not apply to traditional rural people, but were instead meant for black working class and middle class people in the cities.

“There has not been an effective programme with health workers to take people on board about this matter, in the way that Professor [Salim Abdool] Karim and Health Minister Zweli Mkhize do for the affluent people in the city,” he said.

“Our people don’t understand PowerPoint presentations. They understand things better if you explain it face-to-face,” he said.

He asked why it was not possible for people to see the bodies of their loved ones from a distance, before they are buried.

Bawa said following a number of incidents where the wrong body was given to families for burial, they were now having transparent body bags manufactured.

Monageng Bawa from the South African Funeral Parlour Association said their biggest frustration at the moment was delays at home affairs offices due to Covid-19 closures.

“If a regional office closes, the smaller office refuses to help us with a death certificate. This is a national problem. It is not in the regulations. The officials just decided that they will not do it.

“This delays the burial process as home affairs must also issue a burial permit. Also, the funeral policies don’t pay out without a death certificate. Many funeral homes won’t do the funeral if they have not been paid, but some do, and then families don’t pay and they have to chase after bereaved people for money. Nobody wants to do that,” he said.

“We were ready and prepared for an increase in funerals. But if you hit a delay at home affairs, it is bad, because at that moment you will have 20 people dead and you have another 20 coming in. You have to keep moving,” he added.

Bawa added that the cost of funerals is rising because of the amount of personal protective equipment needed by staff. “We also want to buy (PPE) at a preferential rate like the government, but they are only cosying up to the taxi industry – why not us as well?” he said.

Bawa said a single funeral home worker goes through several full sets of PPE before a body is buried.

“At the cemetery, we need six guys in full PPE. So you can see how much we spend on one dead person.”

Bawa said following a number of incidents where the wrong body was given to families for burial, they were now having transparent body bags manufactured.

“We only started with this recently. We are having many Zoom meetings to tell them about the clear body bag,” he said.

“We have seen that there is confusion and we want the family to check first. So even though they still can’t come to wash and dress the body, they can at least see the face.

“Nobody has experienced this kind of pandemic. We do try to correct mistakes. We are also human. No funeral director will do this on purpose. For us, dignity is everything,” he said. DM/MC