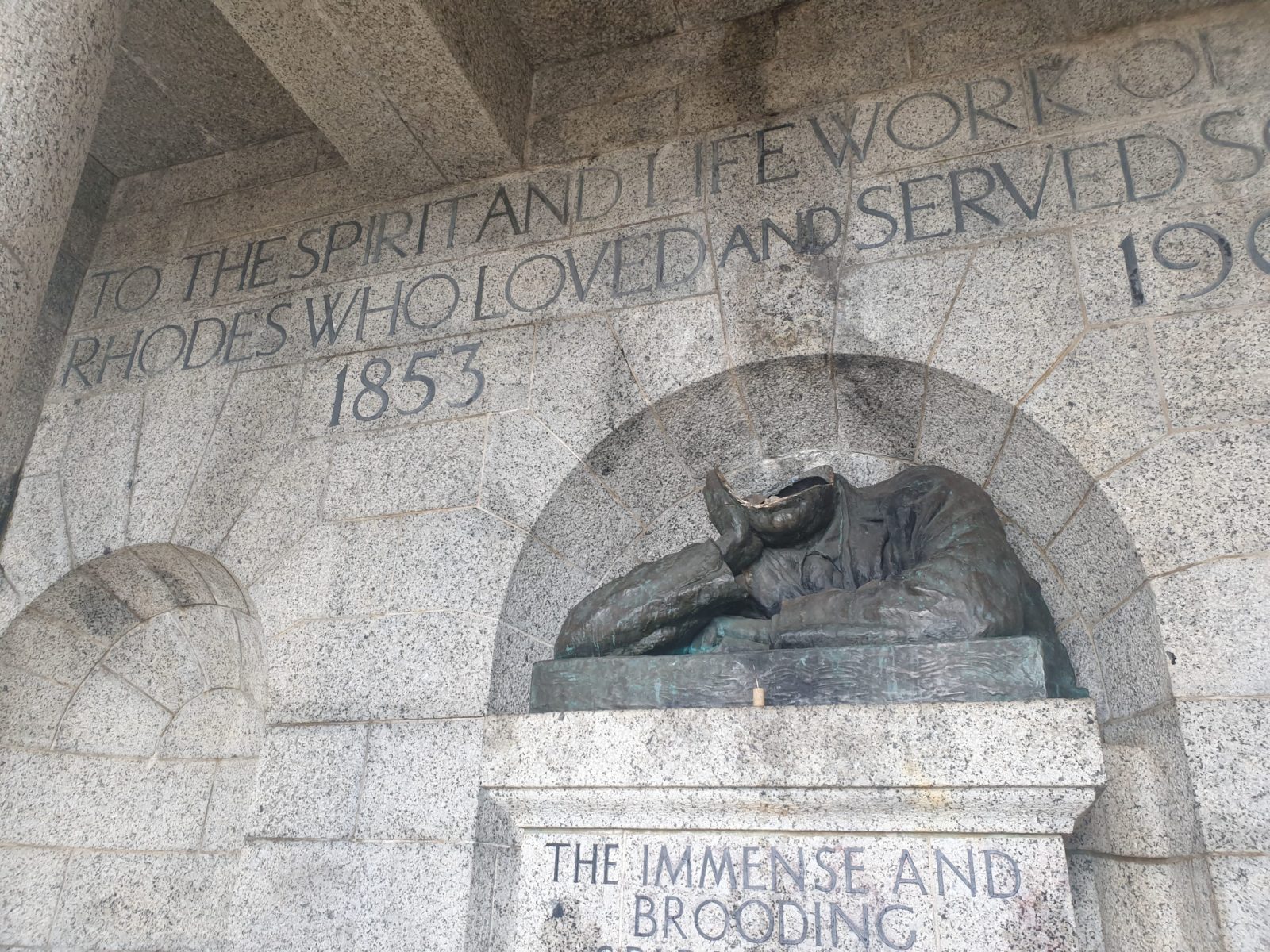 A picture of the decapitated head of the Cecil John Rhodes’ bust – in bronze atop a Cape granite plinth – at the Rhodes Memorial in Cape Town, was posted on Facebook on Monday. And it’s not fake news.

In these days of doctored photos, one can’t even rely on images as evidence of something happening. That’s why, after first seeing a picture of a decapitated Cecil John Rhodes’ bust on Monday, this writer ventured up to the Rhodes Memorial to confirm that more than the nose of the statue had been vandalised.

The bottom gates at the Groote Schuur (upper) estate were locked, but the pedestrian gate was open. Forty minutes later I was taking pictures of the beheaded bust. It was clear that whoever did the deed had cleaned up the area carefully, leaving no trace of the bronze head.

The memorial, designed by Sir Herbert Baker and Sir Francis Macey, has been the target of attacks on several occasions, as confirmed by SanParks spokesperson Lauren Clayton.

Historian Gabriel Brown – who I subsequently discovered had taken the original picture on Monday – said there had been previous attacks on Rhodes’ face.

University of Cape Town students, taking part in the #RhodesMustFall protests in 2015, cut off the nose and called for the removal of the bust. The students were demanding the decolonisation of higher education institutions and curricula.

Brown said he had been meaning to do a mould of the head, knowing it was a prime target for statue bashers, but had never got around to it.

Clayton said SANParks had been informed of the incident on Tuesday. She said police had taken fingerprints at the scene on Wednesday morning. It was suspected the incident occurred either on Sunday night or early on Monday morning.

SANParks acting head of communications, Rey Thakhuli, said: “The head of the statue was cut from the bust with what seems to be an angle grinder somewhere between Sunday night and the early hours of Monday morning.”

A senior ranger on patrol noticed the damage on Monday. A case of vandalism had been opened with the Rondebosch police for further investigation.

Police spokesperson Andre Traut said: “This office can confirm that a malicious damage to property case was reported at the Rondebosch police station on Tuesday 14 July after it was discovered the previous day, 13 July, that the Cecil John Rhodes statue at Rhodes Memorial had been vandalised.

“The circumstances surrounding the matter are being investigated and no one has been arrested as yet,” he said.

The ANC’s Western Cape spokesperson, Dennis Cruywagen, commented: “We have previously said that we have approached the NEC (ANC national executive committee) to reopen the discussion on contentious statues.” He said this decision had been taken in relation to the call for the toppling of the Rhodes statue at Oxford University, Rhodes’ alma mater.

Economic Freedom Fighter MP Nazier Paulsen said the beheading of the bust was “most welcome news. The bust has fallen”.

Paulsen added: “We have been advocating the removal of apartheid and colonial statues since we launched our political organisation.”

He suggested that the Rhodes Memorial be renamed the Ashley Kriel Memorial in memory of the anti-apartheid activist who gave his life to the struggle. “Someone like Ashley Kriel should be memorialised for his battle against apartheid,” said Paulsen.

Chris Taylor, chairperson of the Muizenberg historical society – which helps preserve the legacy of Rhodes – said the attack was a shame.

“It displays ignorance and intolerance. It is part of the history of South Africa, like it or not. You can’t brush (Rhodes) out of history by demolishing a statue.” He said Rhodes wasn’t a monster at all and that his scholarships still provided an education to many.

Meanwhile, Gabriel Brown said he was considering starting a fund to preserve the Rhodes Memorial. He believed there would be an appetite to preserve that bit of history among the people of the southern suburbs.

Brown said the monument had been built and completed by 1912, – a decade after Rhodes’ death – by public subscription, in other words, the people of Cape Town. “I believed for some time this would happen (that the bust would be smashed).”

Brown, who lives in nearby Rosebank, said he saw lights near the Memorial at around 20:00 on Friday night. “I knew something was awry.”

But it was only on Monday that he could get up the hill – noting that the bottom gates a distance from the Memorial had been locked for some time – to take a picture.

He believes all is not lost and that history was a stronger force than statues. He said the public of Cape Town would rally again to rebuild the bust and protect the Memorial.

Brown would like to see South Africa follow the lead of British Prime Minister Boris Johnson, who proposed strong fines for the desecration of monuments and statues.

Brown suspects “a young person” was likely behind the attack and was possibly the same person who previously bashed the nose off the bust.

“We have replaced the nose all of seven times,” he said. “The attacks on the Memorial have been going on since 2013.” Brown said he was able to recreate the Rhodes head himself, and would offer to do so.

The Memorial consists of an imposing staircase of 49 steps – one for each year of Rhodes’ life – in Cape granite that was quarried nearby. The carved lions are the work of John Macallan Swan, who also crafted the bust of CRJ.

The Memorial was eerily quiet in the middle of the day on Tuesday, much as it was, I imagine, when Rhodes lay on his deathbed – a single bed next to a commode where he died on 26 March 1902 at his holiday home in Muizenberg.

Rhodes was prime minister of the Cape from 17 July 1890 to 12 January 1896. He was forced from office after the Jameson Raid – led by his friend Leander Starr Jameson – which itself sparked the Anglo Boer War. Rhodes is credited as being the only person after whom two countries were named: Northern and Southern Rhodesia. 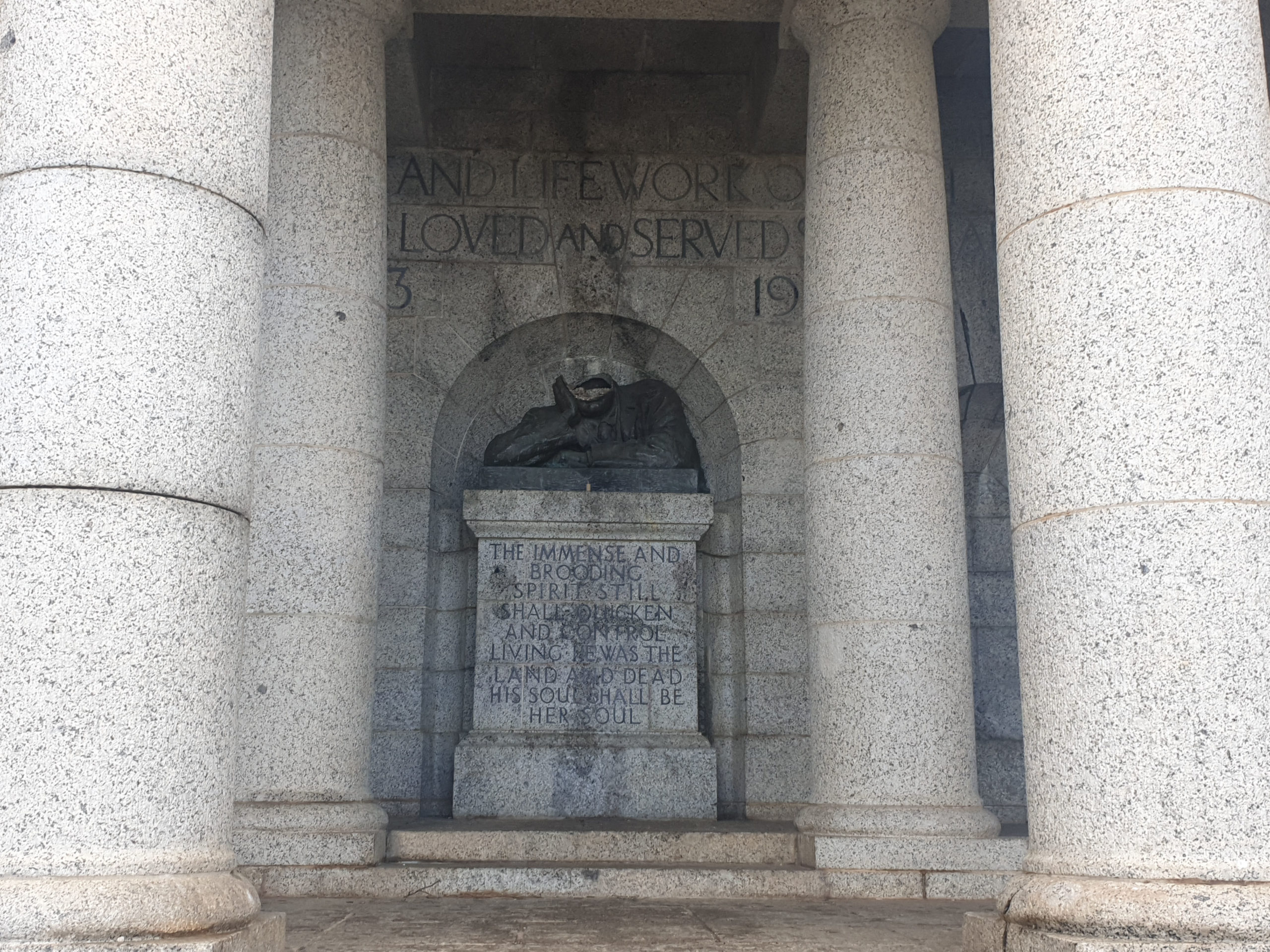 Under the now beheaded bust, the poem written by his friend Rudyard Kipling is still legible:

The immense and brooding spirit still
Shall quicken and control.
Living he was the land, and dead,
His soul shall be her soul! DM

Donwald Pressly is a veteran journalist who was raised in Kimberley, the seat of the De Beers company founded by Cecil John Rhodes 132 years ago. Rhodes was born in Bishop Stortford, Hertfordshire, on 5 July 1853 and is buried in Zimbabwe.