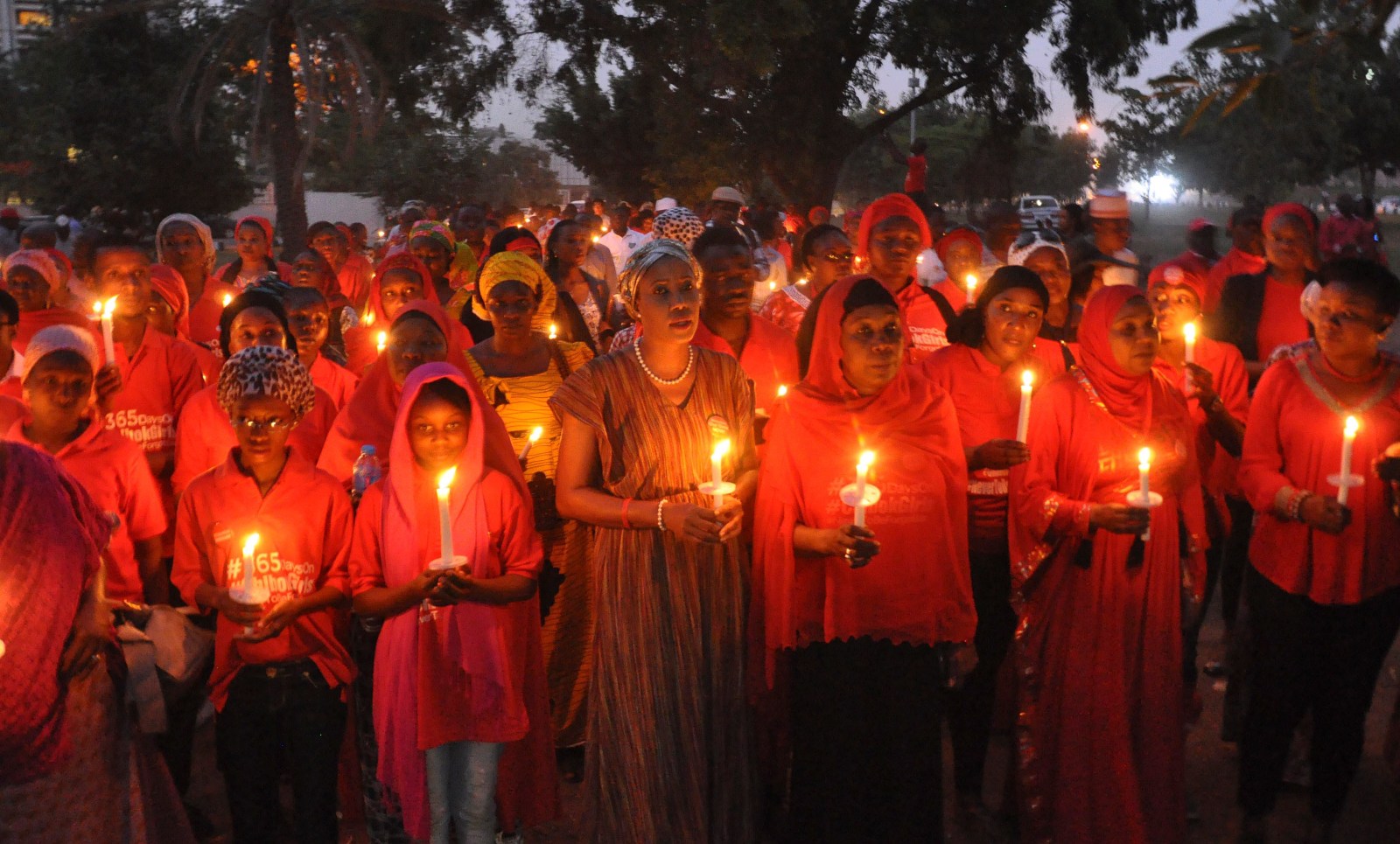 A picture made available on 15 April 2015 shows Nigerians holding candles during a vigil for the one year anniversary of the kidnapping of hundreds of Nigerian school girls in Chibok, Abuja, Nigeria, 14 April 2015. Islamic militant group Boko Haram who have been waging a war of terror in Nigeria for more than five years kidnapped more than 220 girls last year with many of them still remaining missing. EPA/STR

Communities affected by violent extremism are frequently considered to have risk factors linked to socio-economic deprivation, bad governance and religious radicalisation. These factors prevail across the whole of northern Nigeria, and in the north-eastern Bauchi and Gombe states.

However, despite Boko Haram’s factions being active in this zone, Bauchi and Gombe haven’t experienced the levels of violent extremism that other states in the same area have in the past decade. Field research conducted by the Institute for Security Studies (ISS) examined the factors that have helped Bauchi and Gombe resist Boko Haram.

Although religion is exploited by Boko Haram, the group’s doctrines take on their “rationality” from the wider socio-economic context where the mismanagement of limited resources by a ruling class is conducive to a crisis. At the time of Boko Haram’s resurgence in 2010, Bauchi was among the top 10 Nigerian states in absolute poverty and Gombe was the third poorest state in the country in terms of absolute poverty.

From 2012 onward, some Boko Haram attacks occurred in Bauchi and Gombe. Banks and police stations were attacked and a limited presence of extremists was reported in the forests of Darazo, Ningi and Ganjuwa local government areas of Bauchi. In Gombe, the group attacked a prison, police stations and places of worship. Localities such as Nafada, Akko and Funakaye were affected. Risk factors exist in both states, but triggered only limited problems.

The ISS study identified four factors that enabled resilience to Boko Haram in Bauchi and Gombe. First, a combination of geography and ethnicity help explain the limited spread of the crisis in the two states. They share borders with the three states worst hit by extremism – Adamawa, Borno and Yobe. However, Bauchi and Gombe aren’t geographically close enough to experience the full spectrum of violence carried out by insurgents traversing Nigeria’s borders with Cameroon, Chad and Niger.

For years Boko Haram has taken advantage of various informal points of exit from Nigeria into neighbouring countries and vice versa. In Bauchi and Gombe, they don’t have such escape routes. They may use temporary hideouts in parts of the Sambisa Forest that extend to Bauchi. However, the sanctuary that Sambisa offers closer to Borno is more conducive to the group’s attack-and-retreat tactics.

Furthermore the major ethnic group from which Boko Haram has drawn members is the Kanuri. They’re mainly based in Borno, with very few in Bauchi and Gombe. Although most Kanuris oppose Boko Haram, the group could still exploit their language, religion and territory. The Kanuri heartland thus provided the space and local networks, fishing unions, market groups and farming communities for Boko Haram’s recruitment and mobilisation.

A second factor relates to traditional leaders in Bauchi and Gombe. In addition to the formal state structure, both states – like most in northern Nigeria – have an emirate comprising districts, wards and villages. Traditional leaders endorse community policing organised by vigilante and hunter groups, while district, ward and village heads oversee security in their respective spheres of influence.

The Yamaltu Security Committee, for example, was formed in the Yamaltu-Deba locality in Gombe, supported by the local government area chairperson and the traditional leadership. Similar committees were formed in Funakaye where residents experienced a Boko Haram attack. Traditional leaders also organised periodic ethnic group meetings where informants were nominated to oversee strategic locations in communities.

Religious leaders and organisations constitute a third factor. In a struggle where winning hearts and minds is paramount, the involvement of community actors familiar with the doctrinal elements required to deconstruct a terror group’s ideology is crucial.

Mass rejection of Boko Haram owes something to the involvement of Islamic clerics who have spoken out against the group. A repercussion of this was the assassination of clerics across northern Nigeria between 2010 and 2013. In Bauchi, Sheikh Dahiru Usman Bauchi, a prominent Tijaniyya (Sufi brotherhood) scholar, publicly discredited Boko Haram and escaped multiple attacks by the group.

Vigilante groups are a fourth factor. In Gombe, police-vigilante collaboration was effective especially in the 2014-15 period when Boko Haram’s activities peaked. Vigilante groups such as Yan Banga helped identify Boko Haram members in local government areas such as Kwami and Dukku, where an attack occurred in early 2015.

Other community groups that have defended residents include local hunters referred to as Yan Baka. Following an attack by Boko Haram in the Katagum locality in Bauchi, youth groups emerged in self-defence against insurgents. Community members mobilised through vigilante groups and worked with security agencies, reporting suspicious people and sharing valuable information.

There are discernible policy lessons from the Bauchi and Gombe contexts. However, while both states challenge the usual theories linking risk factors and violent extremism, they remain susceptible to risk factors. Levels of structural violence still exist in both states, together with intolerance and discrimination expressed along ethno-religious lines. State governments, in coordination with local administrations, must stimulate dormant sectors like agriculture while targeting the youth demographic.

Traditional institutions are an indispensable part of a society’s resilience framework. Their historical origins enable them to convey the depth of legitimacy communities need to be able to mobilise. These institutions, along with district, ward and village authorities, should strengthen existing coordination in communities.

The ideological component of terrorism is as much a threat as the violence it inspires. Religious leaders and organisations should continue to provide counter-messages against the ideology of Boko Haram and its factions.

The unconventional nature of the struggle against terror groups can benefit from the contribution of community-based groups, such as vigilante organisations. However, these organisations need clearly defined roles within a rule of law framework that enables them to complement state security agencies where relevant. DM