Being young and living with HIV during Covid-19 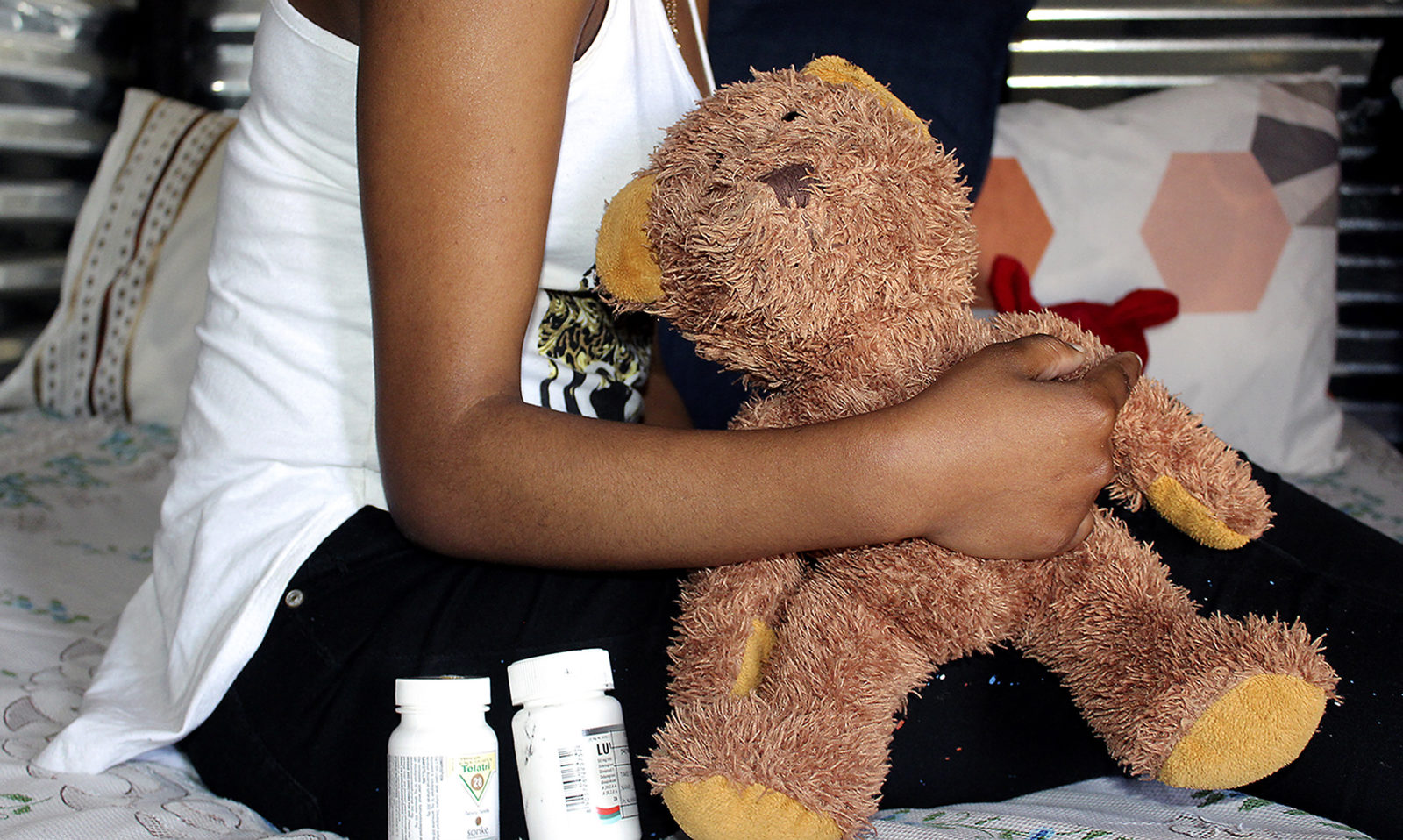 Zinhle* says the stigma attached to young people living with HIV has left her feeling isolated — a feeling worsened by the lockdown restrictions at her local clinic in Cato Manor, KwaZulu-Natal. (Photo: Sandile Duma / Spotlight)

Stigma and discrimination make accessing healthcare services hard for many young people living with HIV. Has it become even harder during the Covid-19 pandemic? Spotlight spoke to young people and activists in KwaZulu-Natal to find out.

The Treatment Action Campaign (TAC) in KwaZulu-Natal says many young people in the province are experiencing challenges accessing antiretroviral treatment, and sexual and reproductive health services. They also say that the Covid-19 lockdown demonstrates the health equity gap faced by poor South Africans.

“Many people on chronic treatment continue to face challenges because of health and economic inequality. People have nothing to eat, and so they see no use in adhering to treatment,” says TAC’s Siphesihle Ntuli.

“Young people are vulnerable to the impact of the virus because they are already too scared or ashamed to fetch their HIV or STI medication. Young people already fear stigma from nurses when fetching HIV or STI treatment. We sometimes aren’t fully supported by our families to encourage adherence and healthy habits during the lockdown,” says Shazi.

To Shazi, 24, having a virus turn your life upside down is unfortunately nothing new. He says he was 10 years old when he discovered he was HIV positive. The devastating news that his mother had not been ready to disclose was revealed to him by his doctor on one of his clinical check-ups.

“There was something about those pills. My mother often told me it was flu medication, but they were stored on a different shelf, and hidden from visitors,” he says.

He came out as a gay man at a time when advocacy for the rights of the LGBTQIA+ community was uncommon. “My struggles for normality and freedom have always been dual-stranded,” he says. “On one hand, I’ve had to fight against my sexuality, disguise and pretend. While on the other hand, hide the truth about my positive status.”

Vuyiswa Mfakwa from Durban and her 11-year-old daughter are both living with HIV. “Essentially, the lockdown defines and amplifies the issues experienced by people living with HIV. There’s limited support and we are also too scared to fetch medication at the clinics because it is unsafe,” says Mfakwa.

She says the support services from her local clinic helped her and her daughter cope, and adhere to their HIV treatment. “People living with HIV, especially those with children, need critical emotional and financial support,” she says. “With the lockdown in full swing, it has been emotionally tough for me.”

Mduduzi Dlamini, an HIV activist with the TAC  from Groutville, Stanger, in the north of the province, says he has been working together with the Groutville Clinic in identifying constraints on health services, encouraging longer, multi-month prescriptions of antiretroviral medicine and helping those who have trouble accessing HIV or TB treatment.

When Spotlight spoke to Dlamini, he was helping a 25-year-old woman living with HIV from birth, who says she has been suffering from genital warts for five years. The woman says she has been turned away from her local clinic and has stopped taking HIV treatment.

“I only go to the clinic to accompany my friends. I think I am ready to die,” the woman tells Spotlight. “I have been living with HIV for 25 years and now I have had to accept living with an STI for the rest of my life. The doctors and the nurse have turned me away, I am unemployed and unable to visit other clinics or pharmacies. Our health facilities are run by medical practitioners who are not sensitive or considerate towards young people. It has been especially worse during the lockdown because we are now far back on the priority list. As a person born with HIV, I have faced stigmatisation from both my family and from nurses,” the woman says.

Later that day, we were told that with Dlamini’s help, the woman was assisted at the clinic and once again started taking HIV treatment.

Alison Best works for TB/HIV Care, an NGO that is assisting the provincial government in providing HIV services in the province.

“TB/HIV Care has been tasked mainly with providing HIV prevention services in KwaZulu-Natal,” says Best. “As such, we do provide sexual and reproductive health [SRH] services through our mobile teams, combined with HIV testing and screening for TB. If someone tests positive for HIV, we can link them with antiretroviral treatment and we have tried to ensure that even during lockdown, our clients have access to ART.”

“Young people have stated it is difficult to access SRH services in clinics because of the attitudes of health workers. TB/HIV Care tries to provide a non-judgmental, youth-friendly service in places accessible to youth,” she says.

That such services are needed is made clear by Zinhle*, an 18-year-old woman who has been living with HIV from birth.

“I refuse to be defined by my positive status,” says Zinhle. “I was born with HIV and I cannot undo that. I often get judged and laughed at by nurses when fetching my medication. They ask me, how a young, pretty lady can have HIV. The ignorance often coupled with the confusion and unintended chaos from Covid-19 makes health practitioners more impatient, and hostile. If I did not have my mother’s support throughout, I don’t think I would still be able to fetch my treatment,” she tells Spotlight.

“As the virus becomes part of our lives, and with the restrictions loosened, I hope it means more nurses and other health professionals will be trained accordingly, especially on empathy towards young people wanting to access health services,” says Zinhle. “Society forces me to live two lives, one of which is the one where I’m honest about my status and I have to keep completely secret from the other one. I have to live this life of shame and secrecy that I find it so hard to take my meds, or make friends.”

Sifiso Nkala, an HIV activist and field researcher with SECTION27, says that introducing the national lockdown to fight the spread of the Covid-19 pandemic created “setbacks” for the distribution of TB and HIV medication in KwaZulu-Natal.

“At the centre of the setbacks faced by the health sector, is the response towards adolescent treatment and young people living with HIV. Under these complex situations, where the world’s priority is the fight against Covid-19, we must not forget about the young people’s struggle during this time. The support is scant and the risk for reinfection and treatment defaulting is gradually reaching its peak,” says Nkala.

“Women, girls, adolescents and other marginalised communities, and their sexual and reproductive health rights are especially vulnerable to the virus. Their safety relies on comprehensive local, national and global measures that account for existing gender and social inequalities in order to combat the pandemic,” he says.

“Outreach programmes and door-to-door services have great outcomes,” he says, “because it is through direct contact with people on TB/HIV or any other chronic treatment, that we can monitor and provide some support. This has been difficult during the lockdown as Community Healthcare Workers (CHWs) and field health workers face risks and uncertainty.”

According to estimates from the Thembisa model, there are just over two million people (around 18% of the population), living with HIV in the province. Of these, between 1.4 and 1.5 million are estimated to be on treatment, said KwaZulu-Natal MEC for Health, Nomagugu Simelane-Zulu, in her budget speech in June 2020.

“The department is targeting the following high-risk groups: women aged between 15 and 24, men, the LGBTQIA+ community, men who have sex with men, sex workers, truck drivers, miners and farm workers,” said Simelane-Zulu. “We are targeting these groups through tangible programmes and awareness campaigns.”

Simelane-Zulu also outlined some of her department’s interventions to reduce the number of people lost to treatment. This, she said, includes calls by dedicated staff at district level to remind clients telephonically about their upcoming appointments.

“In the last 30 days, we made 7,084 phone calls to people in the following districts: Amajuba, Ilembe, Umzinyathi and Umkhanyakude. In the other districts, we are assisted by our development partners. Community Health Workers have been given targets to trace and link back to care at least three HIV and TB clients each week; healthcare facilities have reintroduced Revised Integrated Literacy Classes and scripts which aim to improve treatment adherence so that we reduce Lost-to-Follow-Up [numbers].” Simelane-Zulu said training for this is underway in all districts.

Attempts to get more clarity and detail on these programmes, as well as interventions from the KwaZulu-Natal health department, were unsuccessful. DM/MC

Marcus Low for Spotlight
Save 2 mins

Nathi and Africartoons • 14 hours ago

ANOTHER GRISLY WEEKEND ON THE CAPE FLATS

Grandmother stabbed to death, mother of two murdered while waiting for an Uber