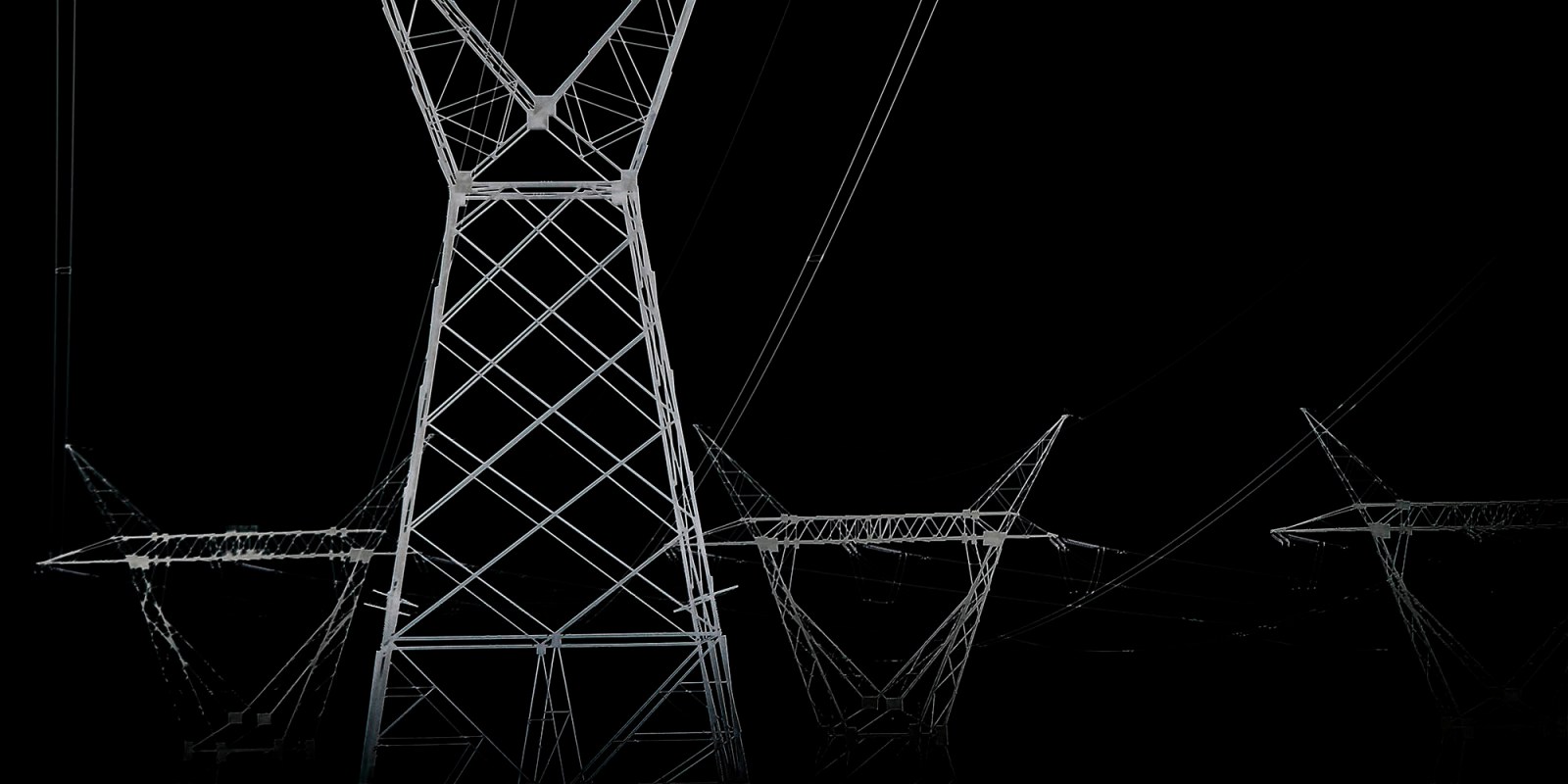 South Africans have suffered 13 years of load shedding and still the ANC favours long-term nuclear and gas options over short-term renewable energy sources and own production that is immediately available.

Eskom has lost control of its fleet of power stations as South Africa is battered by load shedding, icy mid-winter cold fronts and a Covid-19 storm. (See Eskom’s daily report board below).

Since Friday, the electricity utility has ramped up Stage 2 rolling power cuts and on Sunday it started burning fuel at expensive emergency reserve turbines to keep the lights on.

With an economy in recession, two million jobs lost and high demand sectors still in lockdown, this displays how little energy reform has taken place and reveals the snail’s pace of reform at Eskom.

President Cyril Ramaphosa and Public Enterprises Minister Pravin Gordhan have repeatedly promised to end the crisis, but they appear unable to do so.

In February this year, Ramaphosa devoted the lion’s share of his state of the nation address to questions surrounding Eskom, as the country had suffered rolling power cuts at the start of the year. He promised, among others, emergency procurement of power from independent producers; an increase in the allowance for own-generation production to big industries capable of generating; and the speeding up of renewable energy contracts through a new bid window for wind and solar producers.

Those plans lie dormant. Nothing has moved since we reported this: Stage 4 load shedding hits as Cabinet divide on energy deepens: 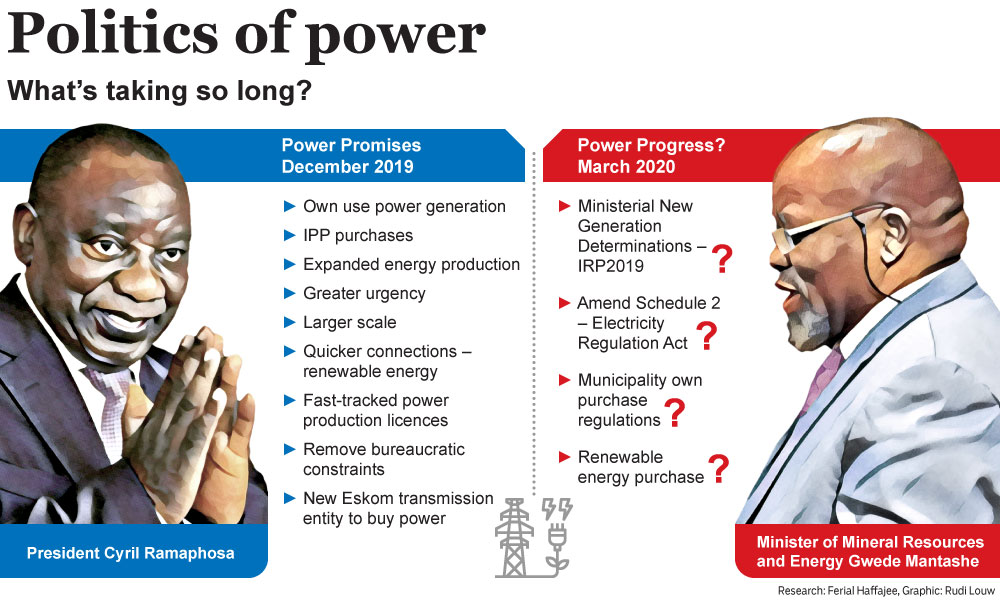 Load shedding is like an X-ray revealing the weaknesses of Ramaphosa’s presidency and his inability to deliver on his promises, no matter how well-meaning his intentions.

“In another 18 months to two years, you will forget that the challenges we had with relation to power and energy and Eskom ever happened,” said Ramaphosa in 2015, when he was deputy president.

In February 2020, in his state of the nation speech, Ramaphosa said, “The recovery of our economy has stalled as persistent energy shortages have disrupted businesses and people’s lives.

“The load-shedding of the last few months has had a debilitating effect on our country. It has severely set back our efforts to rebuild the economy and to create jobs.

“Every time it occurs, it disrupts people’s lives, causing frustration, inconvenience, hardship. Where load shedding is unavoidable, it must be undertaken in a manner that is predictable and minimises disruption and the cost to firms and households.

“Over the next few months, as Eskom works to restore its operational capabilities, we will be implementing measures that will fundamentally change the trajectory of energy generation in our country.

“We are taking the following measures to rapidly and significantly increase generation capacity outside of Eskom.”

Five months later and nothing has happened apart from yet another round of load shedding that is killing off any green economic shoots a lighter level of lockdown has sought to encourage.

Mineral Resources and Energy Minister Gwede Mantashe and Public Enterprises Minister Pravin Gordhan have little pressing active duty on Covid-19, the response to which has fallen on different sets of ministerial shoulders.

In his February 2019 national address, Ramaphosa said, “Eskom has made much progress in implementing its nine-point plan, ensuring better maintenance of its general fleet, reducing costs and ensuring adequate reserves of coal.”

The nine-point plan, as well as a Special Paper crafted by Gordhan, was an emergency plan to stave off load shedding from 2019. Both have failed. This raises the spectre of whether Ramaphosa’s government is capable of the deep reform that South Africa now needs as the economy heads into the worst depression it has known.

In June 2019, in another round of load shedding, Ramaphosa told MPs, “We want to put Eskom on a sustainable operational path and we have seen great improvements. We are closely engaged with the situation at Eskom, with the implementation of the nine-point plan, strengthening the board and setting out a road map for the future.”

For an excellent account of all Ramaphosa’s promises on energy, see this Business Insider piece.

In March 2019, Ramaphosa told us not to panic. “We are addressing the Eskom issue every day. I’m saying to the whole nation, let’s not panic, let us join hands, close ranks and work together. That is why we are addressing it on an urgent basis. There is nothing much more urgent than restoring power.”

The economy is now in the doldrums

In its recovery document released on 10 July, Business for South Africa (B4SA) said it expects GDP to decline by between 8% and 10% in 2020, recovering in the next two years to pre-Covid-19 levels, with muted growth thereafter. It forecasts a budget deficit of 13.3% for this fiscal year.

Why is Ramaphosa messing up so badly on electricity?

No matter his greatest intentions and personal popularity, Ramaphosa presides over a broken state and patronage circles continue to expand.

In addition, deputy president David Mabuza is largely missing in action during the Covid-19 crisis – and he is the political head in charge of the energy war room.

Earlier this year, Mabuza set his face against renewable energy as a solution to the energy crisis, despite Ramaphosa saying this was a part of the solution.

“Independent power producers… these are individuals that are supplying 5MW, two there, 10 there… it’s not significant. There’s not even a single independent producer that is producing 500MW, all of them are less than 100, some are less than 50MW. Whether they are there or not, it wouldn’t make any difference,” Mabuza said.

A powerful political lobby operates on the slogan that green energy is not black enough, and that nuclear and clean coal is the black option for energy market participation by black business.

The only energy measure of substance that Gwede Mantashe has undertaken is in  nuclear, when his department put out a request for information (RFI) in June 2020. Sunday Times journalist Sipho Masondo also reported that Mantashe is exploring Russian gas deals, possibly enabled by the ANC arms deal middle-man Fana Hlongwane, who was also deeply entrenched in the Gupta patronage network.

In a presentation to the International Energy Association last year, the government promised to open up its energy market to independents.

“Discussion has commenced with the independent power producers to establish which of the bid window 4 projects (renewable energy), originally scheduled to come on stream in 2023, can be brought on stream from February 2020,” said a department of energy slide.

That same report said South Africa is not planning a rapid transition away from coal to clean energy forms.

Another slide says: “South Africa has reduced its reliance on coal for generating electricity from over 90% to just over 75% over the past few years.”  Different energy interests are competing, resulting in stasis and load shedding.

While the energy regulator, Nersa, says it is  consumer-focused, it has not made progress on the emergency power procurement Ramaphosa promised over a year ago. In February, spokesperson Charles Hlebela said it would take four months to process licences for own production above one megawatt, a step which could significantly ease pressure on the grid.

Last year, government promised the energy mix will be almost immediately altered with 2000 MW of capacity to be procured by the department of mineral resources and energy, but that has still not happened.

In the meantime, consumers can expect electricity prices to go up after Eskom won a court case against the regulator, suggesting the next round of tariff increases will be high. This article explains what that might look like.

South Africans have now suffered 13 years of load shedding and there is no end in sight, as this excellent article by Tehillah Niselow explains. DM

Majuba, U6 Synchronised on load.

Koeberg, U2 Synchronised on load.

Majuba, U3 Tripped & Synchronised on load.

Majuba, U4 Tripped & Synchronised on load.