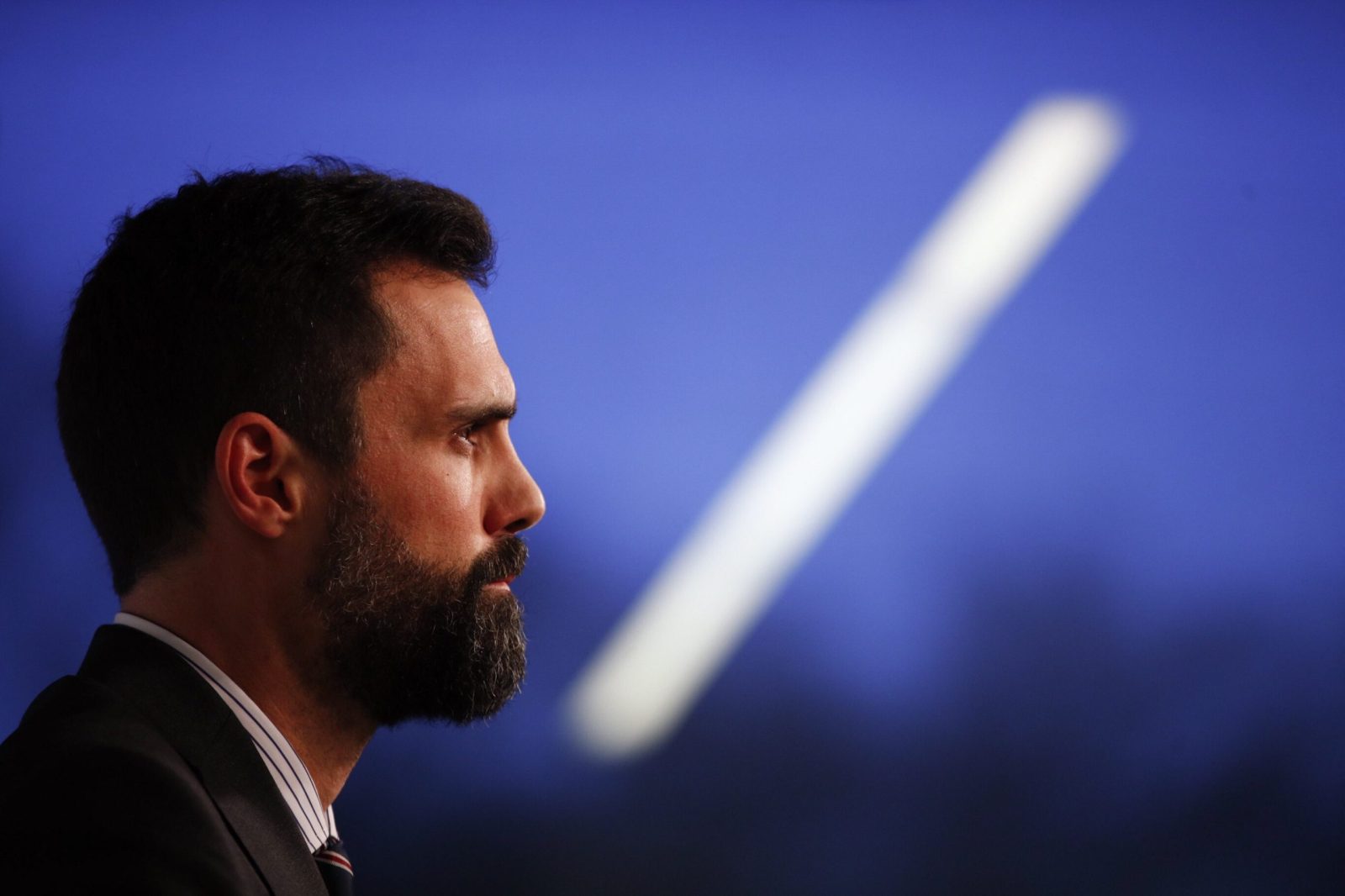 epa08117477 Catalan regional Speaker Roger Torrent addresses a press conference in Barcelona, Spain, 10 January 2020, to announce he 'does not recognize the effects' of the Supreme's Court announcement about Catalan regional President Quim Torra. The Supreme Court has denied Torra's petition to urgently suspend the decision made by the Spanish Electoral Commission, last 03 January 2020, of withdrawing Torra's MP certificate after last 19 December 2019, the Catalan Superior Court of Justice sentenced Torra to be suspended for 18 months after he refused to withdraw pro-independence symbols from public buildings during the electoral period. EPA-EFE/Alejandro Garcia

MADRID, July 14 (Reuters) - The speaker of Catalonia's regional parliament Roger Torrent suspects he was spied upon by the Spanish state via phone tapping, a spokesman said on Tuesday, confirming a report first published by the Guardian and El Pais newspapers.

The newspapers said Torrent and two other separatist politicians were warned by researchers working with Facebook’s instant message service WhatsApp that their phones were broken into with a spyware called “Pegasus” made by Israeli company NSO Group.

The prime minister’s office said the Spanish government was “not aware” of any such spying on the three separatist leaders.

A spokesman for Torrent confirmed the details in the newspapers and said: “Everything seems to show the Spanish state is behind this.”

“It is clear that Mr. Torrent was not involved in criminal activity such as terrorism or drug trafficking that would justify a judicial order to intervene on his phone,” the spokesman said.

The prime minister’s office said: “Any intervention on a mobile is always carried out in accordance with the law that requires judicial authorisation.”

Tensions between Catalonia’s separatist regional leaders and the central government in Madrid have been high for years, particularly since a failed independence bid in 2017.

NSO, whose customers include law enforcement and governments around the world, declined to say whether it had sold its Pegasus software to Spain.

It said its software “is operated in line with our industry-leading governance policies solely by authorised government agencies to fight terror and serious crime, and protect public safety”.

WhatsApp last year said 1,400 of its users had been targeted by Pegasus. It said the attack exploited its video calling system to send malware to mobile devices.

Britain’s Guardian newspaper, without citing a source, said WhatsApp believed the attacks in Spain occurred over a two week period in April to May 2019, when the 1,400 users were allegedly targeted by the spyware.

The Pegasus spyware has been linked to political surveillance in Mexico, the UAE and Saudi Arabia, according to the University of Toronto’s Citizen Lab, which researches digital surveillance. (Reporting by Inti Landauro, Joan Faus, Belen Carreno and Tova Cohen; Editing by Ingrid Melander and Alison Williams)