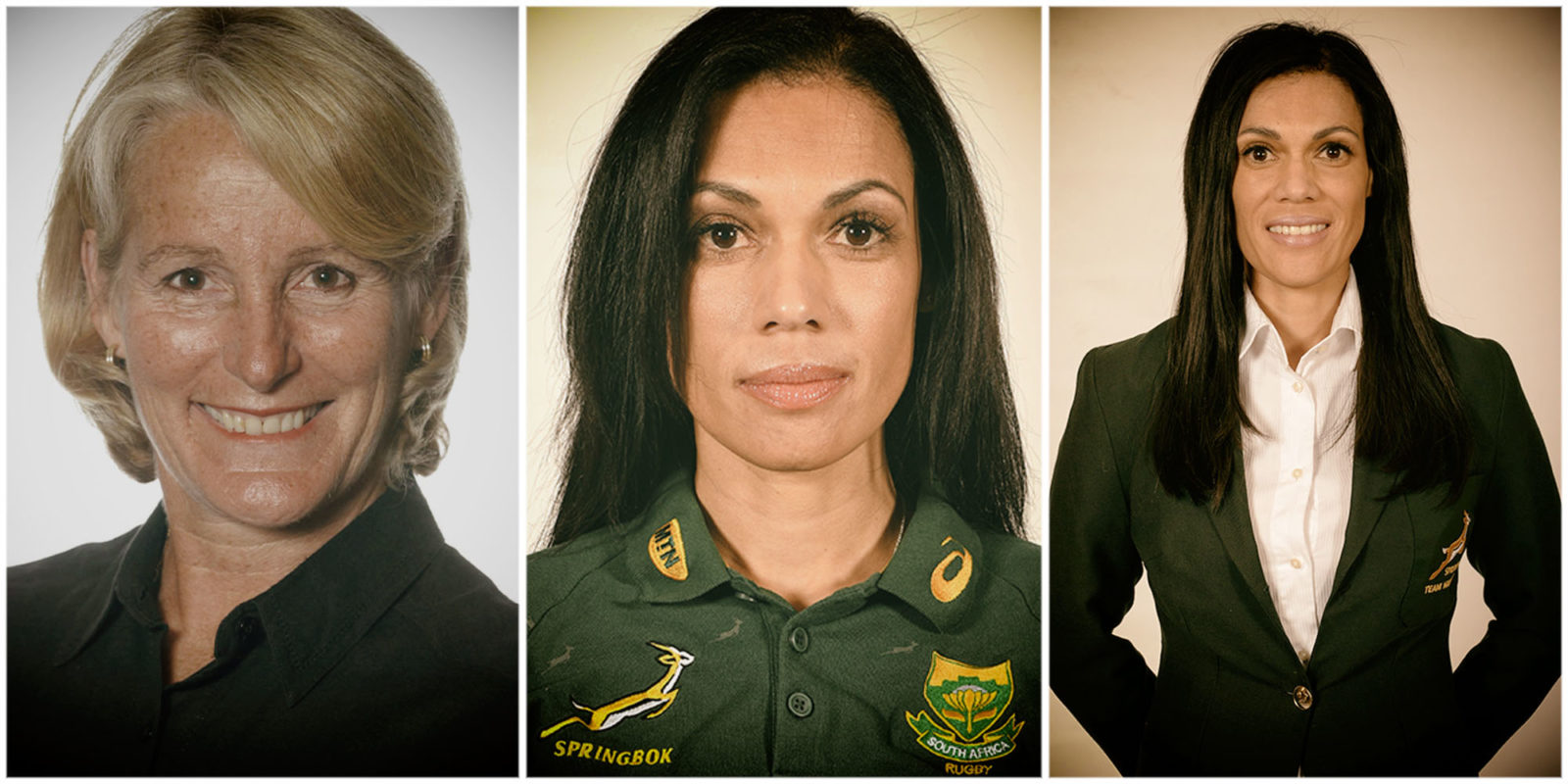 Who was that woman ‘stealing the spotlight’ from the Springboks after their World Cup triumph? Turns out she was from the Cape Flats — and one of the secrets of the Boks’ success.

In their workplace, they stand out — female physiotherapists doing an essential job in the masculine heart of a rugby scrum. But Helen Millson and Rene Naylor — former and current Springboks’ physios respectively — would rather be recognised for their professionalism than their gender.

That has been easier said than done, as they shared at a webinar hosted by Wits Sport last week.

In the team environment, much anti-sexism progress has been made, with coaches and players nowadays far more accepting of a woman in their realm than not so long ago. However, it’s been a rather long walk to acceptance, as attested by Millson, who became the first female physio to work with SA Rugby, in 1992.

When she got the job, back in those bad old days, it created a furore.

“At the time, Danie Craven, the SA Rugby Board president, came out of the woods and said in 123 years there’d never been a woman involved in rugby and he didn’t want women involved in rugby,” Millson recalled.

“It went viral around the world because Nelson Mandela had just been released and the motto going around was: ‘No colour, no creed, no gender.’ It went all over the world,” she added.

Her appointment also got plenty of local media attention, most of it negative. There was a story with the headline ‘Dok Craven en die blonde probleem’, in which she was cast in the role of the ‘probleem’. Cartoonists went to town with depictions of her treating hulking rugby players — inevitably some having sexual overtones.

Millson tried to ignore all the fuss and got on with doing her job as best she could.

Cape Flats to the world

Naylor’s dream of becoming a physiotherapist was forged in the Cape Flats. It was nourished by her father — despite a career counsellor at a prestigious tertiary institution telling her she hadn’t a hope of realising her dream.

Determination saw her get to study physiotherapy and, after earning her stripes working with a local rugby club, she landed a job at Western Province Rugby with the under-19 side. Seven years later she was part of the WP senior team — and soon thereafter the Springboks came calling.

“I didn’t expect the Springbok job because I didn’t think, as Helen experienced, they’d take a female,” said Naylor. “When I got the phone call asking me if I was interested in the position I was very surprised because they’d never had a female as a permanent physiotherapist in the Springbok team. And also, as a black female, I was surprised.”

She didn’t feel unwelcome during her first Bok stint in 2008, but quickly figured out the strict hierarchy in the team environment and kept to herself. At the back of her mind throughout was a desire to be a great representative for females.

“I decided that I had a responsibility as a female to prove that I could be good at this job. Because I felt that, if I wasn’t, they wouldn’t take another female,” she explained. “The most important thing was to be respected as a physiotherapist, first and foremost, rather than a female physiotherapist.”

After giving birth in 2013, Naylor elected to take infant son Cullin on tour with her, rather than take maternity leave. It was an unprecedented situation and, with much trepidation, she pitched her idea to coach Heyneke Meyer and manager Ian Schwartz. Instead of the firm “No” she was expecting, the Springbok bosses embraced the idea — as long as she could fulfil her work commitments.

Naylor took her own au pair along to Buenos Aires, Brisbane and Auckland, while there were comical moments when little Cullin was thrust into a various beefy Bok forwards’ arms, to give mum a break on plane journeys.

“I don’t think I slept much, if I reflect back on that time. And I hid my baby. At the airport I didn’t walk with my baby, because was it going to look professional if I’m wearing my blazer and I’m walking with my baby? So, the au pair had to have the baby,” revealed Naylor.

She went on to become a vital cog in the world-beating Springbok team that lifted the Webb Ellis Cup in 2019. But she admits to being a bit stung when pictures of her celebrating with the boys on the World Cup final podium drew public comments about a woman “stealing the spotlight”.

Millson, currently medical consultant to insurers for 20 English Premier League clubs and the French football team Paris Saint-Germain, said that for female physios wanting to branch out into the world of sport, the key to success is a bounty of knowledge.

“The cornerstone is knowledge. I’m not a rugby player, but I sat there for hours and got involved. I made them lift me up as a lock at lineouts, and drop me, and saw why they all came to me with back problems,” she said.

“I even, which I’m not recommending for physios, got into the scrum. I tried the tighthead and loosehead to see what the difference was in the neck.”

Women being gawked at or subjected to extra scrutiny when venturing into the male sports arena is not new. Eva Carneiro, who rose to prominence as the Chelsea football team’s chief physio between 2009 and 2015, was frequently subjected to sexist chants by opposition fans.

Like Millson and Naylor, these professionals have soldiered on and stamped their authority in their respective fields. DM

The tortoise and the hare: Why a Covid-19 vaccine is outrunning its HIV counterpart