Send in the heroes: Donald Trump’s Garden of Imaginaries 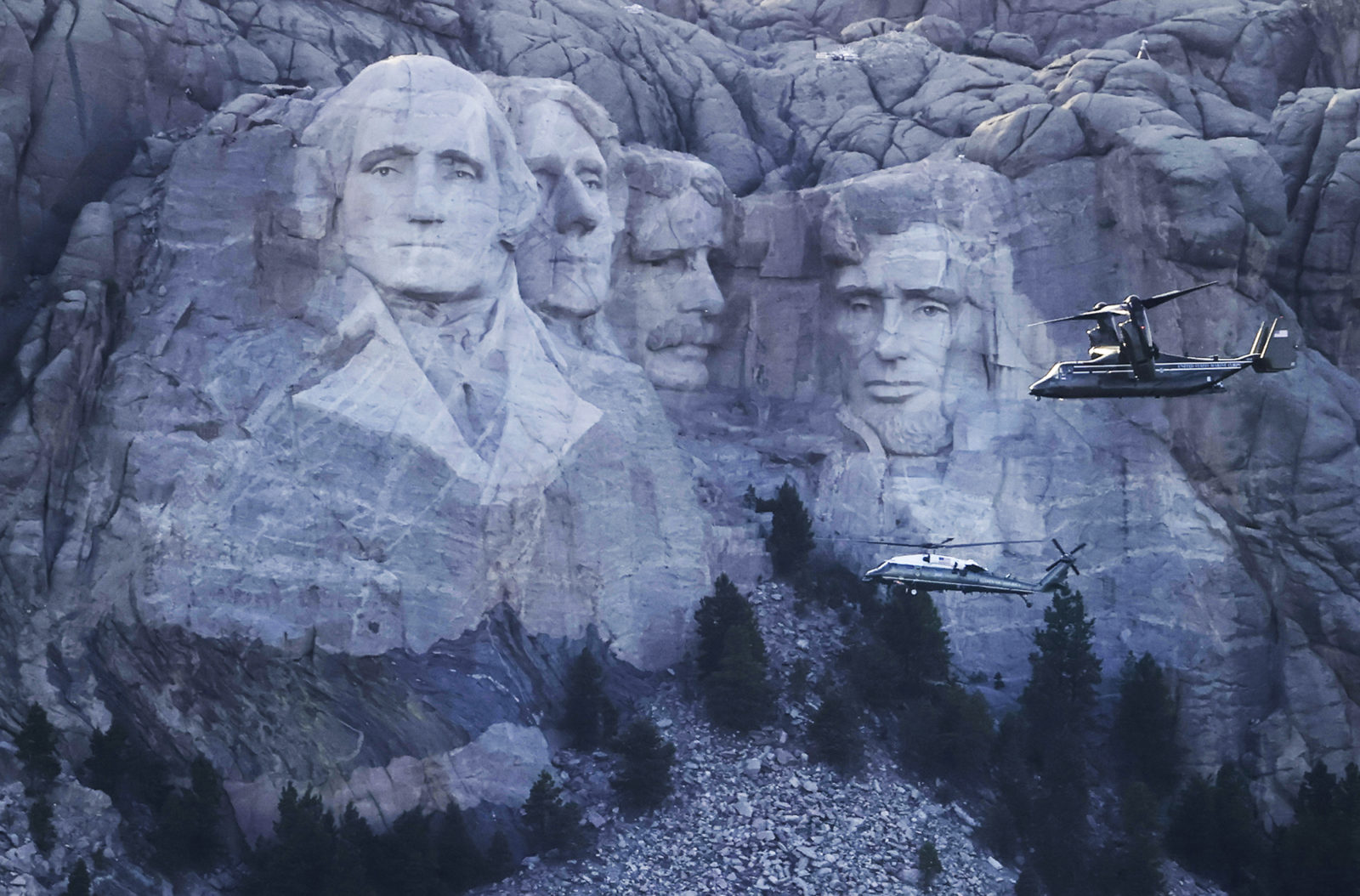 The US president’s pitching for a garden of authentic American heroes encourages us to propose a better idea – a garden of true fictional heroes who, collectively, can become the perfect evocation of American values, hopes, desires – and a few flaws.

For July Fourth, Donald Trump had given a racially incendiary speech at Mt Rushmore before thousands of non-mask-wearing, non-social-distancing Trump supporters. That is the park that features those enormous carved busts of presidents George Washington, Thomas Jefferson, Theodore Roosevelt and Abraham Lincoln on the granite face of the mountain (and just incidentally the site of the penultimate scene in Alfred Hitchcock’s great thriller, North by Northwest, for all you film buffs).

Meanwhile, various Native American groups had been protesting that land used for the monument had been unfairly appropriated from them to use for this park. The president, of course, had made sure to use this occasion to preach his peculiar twisted, nativist, populist rhetoric that a vast motley clique of radical, history-denying, heritage-cancelling, Antifa, revolutionary, radical-socialist-fascist were all dedicated to destroying the country and its uniquely righteous heritage.

Amid all this sturm und drang, the president chose to launch – or, at least, announce – his plan for a national garden of heroes. In his mind, this would only feature magnificent realistic statuary, none of that abstract or modernist nonsense that fails to express sufficiently the grandeur of its perfect conception. This idea has obviously been percolating away inside the Trump psyche for some time, and it fits neatly with his deep animus towards those who would push for some serious rethinks about which statuary reflects national history – and which ones – Confederate generals, Christopher Columbus, slave-holding presidents – should be removed from places of honour.

Crucially, for the president, removing these statues, and most especially those that have now become contentious symbols of an earlier slave-based economy in the wake of nationwide protests about police killings of younger black men, is a line that cannot be crossed. And so, inevitably, the president has proposed his park to help roll back these forces of anarchy and disaster. Thinking about it, it seems clear that much of the impetus for this patriotic amusement park derives both from the success of places like Disneyworld and some long-felt envy over the patriotic, super-realist monumentalism that used to reign supreme in Central or Eastern Europe. Thus, he decried, in effect, there would be no Jeff Koons giant metallic balloon dogs or other decadent objects in his park.

But there is also more than a whiff of the influence of Parson Mason Locke Weems about it. Weems was the hagiographic biographer of George Washington and other Revolutionary War-era heroes. In his biography of the country’s first president, Weems had created – more or less out of whole cloth – that Washington was of such purity and thus worthy of national adulation that even as a small boy he could never tell a lie. Thus his confession about the chopping down of a prized cherry sapling in his father’s garden when he had been given a new child-sized axe. Weems’ way with the believable tall tale became the default style of telling these biographies straight through the 19th century. They became staples of generations of grammar school English language textbooks and, even now, many Americans can still automatically subconsciously link impeccable honesty, cherry trees, and cherry pies with Washington, courtesy of this approach of deifying early national heroes.

And so, the Trumpian call for this new national garden of heroes and the executive order setting the planning in motion. (There is nothing inevitable about it, of course. If Joe Biden were to win the election, come November, this project will inevitably be stopped in its tracks, at least in its current form of a bronze bestiary or topiary park of heroes.) But here is the rather strange mix of people Trump has proposed: John Adams, Susan B Anthony, Clara Barton, Daniel Boone, Joshua Lawrence Chamberlain, Henry Clay, Davy Crockett, Frederick Douglass, Amelia Earhart, Benjamin Franklin, Billy Graham, Alexander Hamilton, Thomas Jefferson, Martin Luther King, Jr, Abraham Lincoln, Douglas MacArthur, Dolley Madison, James Madison, Christa McAuliffe, Audie Murphy, George S Patton, Jr, Ronald Reagan, Jackie Robinson, Betsy Ross, Antonin Scalia, Harriet Beecher Stowe, Harriet Tubman, Booker T Washington, George Washington, and Orville and Wilbur Wright. Okay, if you are going to build something like this, some of these names make sense, of course.

Yes, Audie Murphy was the most decorated soldier in World War II, and Patton and MacArthur were key figures in that war, but more so than others like Eisenhower or Omar Bradley? And just how did Henry Clay, a politician who helped mightily in delaying the end of slavery, or arch-conservative Supreme Court Justice Scalia – over Justices Earl Warren or William O Douglas – make this cut? And not to take anything away from Amelia Earhart, but does her role in aircraft development surpass that of Charles Lindbergh? (Okay, he flirted hard with neutrality in World War II and touted “America First”, so that should have made him a natural for the incumbent president.) And Rev Billy Graham over someone like Rev Reinhold Niebuhr? Really? While we are about it, what happened to the two Roosevelts – in comparison to Ronald Reagan? But the most egregious fail is the rather obvious lack of scientists, industrialists, educators, artists, writers, composers, and performers – except for the Wright brothers and Harriet Beecher Stowe.

But then it hit me, this whole list, with a few modest exceptions, really owes much more than anything else to the Weems-eye view of what makes America great. There are even a few people, like Davy Crockett and Betsy Ross, whose fame and importance are largely owed to legends spun about them. If that is the case, why not simply go all the way, and make the whole project one of fantasy. Then we could have a garden in which all the figures have been chosen for their legendary qualities and attributes. It could be like those old Tiger Balm Gardens in East Asia that had statues that depicted classical Chinese virtues and values, as well as helping flog the Tiger Balm brand – or maybe something like the way Carl Jung or Joseph Campbell would have picked the heroes for inclusion, had either of them been content consultants for the project.

With these thoughts in mind, what is included in this garden of heroism? Obviously, the figure welcoming everyone into the park must be Superman, he of those values of “truth, justice, and the American way.” Next to him might be Supergirl, Spiderman, Batman, the Green Lantern, Wonder Woman, the Black Panther, the Flash and the rest of the DC and Marvel Comics universe. Those folks have values with a capital “V”. And if you like, add Popeye too.

Then, as one moved deeper into the park, there are the authentic folk legend figures of Johnny Appleseed (environmental consciousness), Pecos Bill (taming adversity), Paul Bunyan, Joe Magarac, and John Henry (astounding feats of strength and economic prowess), Rick Blaine (of Casablanca fame), John Shaft, Mr Miyagi, the Lone Ranger and Tonto, and Zorro (all renowned for standing up against injustice) could be seen. While he is a modern invention by the National Parks Service and was modelled on an actual orphaned bear cub, we cannot leave out Smokey the Bear and his stern injunction: “Remember, only you can prevent forest fires!” Not to be outdone, literary creations of durability and strength must include iconic figures like Holden Caulfield, John Yossarian, Evangeline, Daisy Buchanan and Nick Gatsby, Captain Ahab and his whale, and maybe Alex Portnoy too. Each of these individuals, separately, illustrate important aspects of the American character. Hey, and what about Rin Tin Tin and Lassie? They certainly demonstrate loyalty above and beyond the call of duty. Admirable stuff.

But crucial American archetypes must also include earlier figures like James Fenimore Cooper’s Natty Bumppo and Chingachgook, as well as the creations of German author Karl May, Old Shatterhand and Winnetou. Few Americans have probably ever heard of the latter two men, but May sold 200 million copies of his novels and inspired generations of European readers to dream about the American West (and for Germans to spend their summer holidays in faux Western Native American encampments, learning traditional lore and legend).  Naturally, in all of this park, we would rely upon the wonders of animatronics, CGI and other techniques to make all these figures come alive to visitors and hear and see their most famous words being spoken – or barked.

And on and on we could go in the creation of this garden of folkloric and fictional figures. In the precise centre of this park, the apotheosis of this vision would be a triumphant figure of… who else but Donald John Trump, the epitome of fakery and flimflammery, a nearly entirely made-up creation, with much of it dependent on the directors, scriptwriters and make-up artists responsible for The Apprentice, an entirely made-up vision of entrepreneurial values and skill. But maybe we should not publish this vision at all, lest Mr Trump decides this is his next construction project once he leaves the White House. DM

Bernard Chiguvare for GroundUp
Save 2 mins

Real transformation: Let’s uphold the spirit of ubuntu, not the nothingness of abandonment