People power and trust in the judiciary: How Malawi stood up for democracy 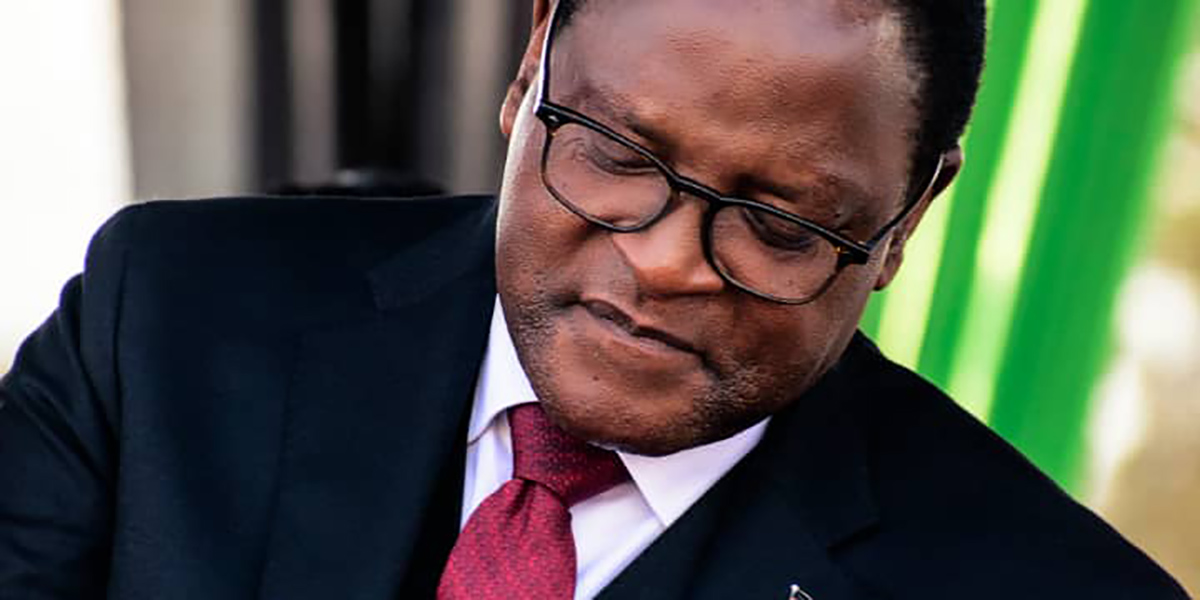 On 7 July 2020, the government of Malawi issued a little-noticed announcement, withdrawing its decision on 12 June that the country’s chief justice, Andrew Nyirenda, had to go on compulsory leave pending retirement. In a nod to both the separation of powers and judicial independence, the notice acknowledged that the matter of the chief justice’s leave and how or when it should be taken was a “matter between the Honorable the Chief Justice and [the] Judicial Service Commission”.

It was a fitting bookend to the recent story of one of Africa’s unquestionably more unlikely political models, where the judiciary has emerged with credit in policing the ground rules of democratic politics.

In the 26 days from 12 June to 7 July, Malawi navigated a tumultuous path back to the future. On Sunday 14 June, the High Court of Malawi issued two orders suspending the presidential notice that would have effectively sacked the chief justice.

Two weeks later, on 28 June, Lazarus Chakwera, a Pentecostal pastor, took the oath as independent Malawi’s sixth president, replacing Arthur Peter Mutharika, the law professor whom he defeated in the rerun in June 2020 of a ballot from May 2019, which Malawi’s courts had found to have been characterised by high electoral larceny.

The path to this outcome was both tortured and, in the view of many people outside Malawi at least, improbable.

When Malawi went to the polls to elect a president on 21 May 2019, there were 10 parties on the ballot paper. They included Peter Mutharika of the Democratic Progressive Party (DPP), first elected in 2014. He was running for a second term.

Mutharika’s vice-president, Saulos Chilima, having fallen out with him, ran on the platform of the United Transformation Movement (UTM). Chakwera was the candidate of the Malawi Congress Party (MCP). Also on the ballot was Atupele Muluzi of the United Democratic Front (UDF).

Malawi’s first-past-the-post  electoral system was designed to produce as the winner the candidate with the highest lawful votes. The Malawi Electoral Commission registered 6,859,570 voters to vote in the ballot.

Both Chakwera and Chilima were unhappy with the declared results. The public mood was also fractious, and there were allegations that the electoral commission, led by supreme court justice Jane Ansah, had rigged the polls. Duelling public protests ensued, with vocal civil society advocating that #JaneAnsahMustFall as others claimed that she was the victim of targeted misogyny.

With the support of civil society, Chakwera and Chilima headed to Malawi’s constitutional court to challenge the results. On 3 February 2020, the court nullified the result and ordered a fresh presidential ballot with two stipulations. First, the rerun had to be held not later than six months from the judgment. Second, the winner had to emerge with a clear majority of at least 50% plus one of the votes cast. This was a high threshold for a country where presidential contests had historically been squeaky affairs.

As he was entitled to, Mutharika appealed the judgment to the supreme court. On 8 May, the supreme court affirmed the judgment of the constitutional court, throwing out Mutharika’s appeal. In doing so, the court identified three categories of irregularities that had marred the elections. It found “documents whose contents were altered by either the use of Tipp-Ex, a manual crossing out of the original content or overwriting on the original document. Then there are … completely new documents. In other words, documents that were never, at all, submitted by the polling station. Examples are duplicate, fake, reserve and uncustomised documents. The third category is unsigned documents.”

Under the terms of the court orders, the rerun was set to take place on or before 2 July. There was not a lot of time to get it done. This was only the second time that a court in Africa had nullified a presidential contest.

The first time, in 2017 in Kenya, ended in a fiasco when the irate ruling party decided in response to eviscerate the electoral process to the point where the opposition effectively pulled out of the rerun, paving the way for the incumbent to emerge practically unopposed.

By the time the Malawi supreme court had handed down its judgment, the world was already in the throes of the Covid-19 pandemic. In other parts of Africa, Mutharika’s peers had set about using the pandemic as cover to retain power. In Guinea, President Alpha Condé used it to amend the constitution in order to secure a life presidency. In Burundi, President Pierre Nkurunziza saw in the pandemic an opportunity to install his hand-picked successor.

This was an appealing playbook for Mutharika. On 20 March, he proclaimed an indefinite “state of national disaster” during which he banned “all gatherings including weddings, funerals, church, congregations, rallies and government meetings” of more than 100 people. With this he sought to ban all political rallies during the period preceding the proposed rerun.

For Mutharika and his coterie, the courts and the church were tag-team against him in a contest in which his biggest opponent was a pastor. It was an odd place to be for somebody who is arguably Malawi’s best known law professor. He should have known that Malawi’s political history was defined by the contest between courts and despots, one in which his own family members have been prime actors.

On Christmas Eve in 1981, the government of Malawi’s founding president, “Ngwazi” Hastings Kamuzu Banda, abducted Malawi’s exiled first attorney-general and justice minister, Orton Chirwa, and his wife, Vera, from Zambia and returned them to the capital city, Lilongwe.

Orton was the founding president of the MCP, which led Malawi to independence in 1964. He was also Malawi’s first lawyer. As minister in the transitional government of 1962, Orton took issue with the presumption of innocence and burden of proof in criminal trials, arguing for their replacement with traditional African norms and institutions. As attorney-general, he pushed for these reforms but was turfed out of cabinet in September 1964 in a power tussle with Banda, before the reforms were promulgated.

A sequence of unsolved murders in the country ended up in the Chilobwe murder trials in 1969, which collapsed when the prosecution could not meet the standard of proof. In response, Banda scrapped criminal trials by regular courts, transferring jurisdiction over crimes to traditional courts, comprising a traditional chief as chair, with three citizen assessors and one lawyer.

Banda, by this time also his own justice minister, appointed the traditional leaders. They also reported to him. In an ironic twist of fate, Orton would be arraigned for treason in 1983 before the kind of traditional courts he had advocated for as attorney-general. His trial was a charade. The court denied him and Vera – herself Malawi’s first female lawyer – legal defence or the right to call witnesses.

He was initially sentenced to death on conviction, but Banda commuted this to life imprisonment. Orton spent the remainder of his life in solitary confinement at the Zomba prison in Malawi, where, in December 1992, he died at the age of 73.

It was the eve of Malawi’s transition from the despotism of the “Ngwazi”. In 1994, under the new multiparty constitution, Banda ran against and lost to Bakili Muluzi of the UDF, who himself had served Banda as minister. In 2003, a term-limited Muluzi sought to amend the constitution to extend his tenure.

Frustrated by the courts and the people, he chose a little-known economist and former deputy governor of Malawi’s central bank, Bingu wa Mutharika, as his successor. Following a royal falling-out between them, Bingu fled Muluzi’s UDF to start up the DPP. In 2009, Muluzi sought to return to presidential politics, but the courts ruled him permanently term-limited.

Seeking to consolidate power, Bingu tapped his own brother, Arthur Peter, as his closest adviser and minister, before installing him formally as his chosen successor as DPP leader. When Bingu died suddenly in 2012, his brother attempted to short-circuit the constitutional line of succession by hiding his demise and then exporting his body to South Africa in the hope that some malefaction could be invented to stop the vice-president from taking over.

He failed and the body of his older brother suffered the indignity of being buried in a state of considerable putrefaction. A man who could do that to the remains of his brother and benefactor should not have been entrusted with power, but in 2014 the people of Malawi did.

Back to the future

In the end, the country got tired of the despotic sleaze and cronyism of Peter Mutharika. Forcing him out, however, produced a drama fit for the script of Back to the Future. After being thrown out of power in 1994 following the 30 despotic years of the “Ngwazi”, the MCP was reluctantly accepted by Malawians this time as the vehicle for their political progress.

In doing so, however, they forced it to form alliances with nine other parties in the Tonse (together) Alliance, providing the kind of broad platform for what would become a sweeping victory and constraint on abuse of power.

To resist the Tonse Alliance, the Mutharika family made up with the Muluzis, enabling Atupele, Muluzi’s son, to become Mutharika’s running mate on the losing ticket.

The result is a rousing tale of democracy in all its messiness and inspiration. In all this, the people of Malawi found the voice to defend their democracy. When, therefore, Mutharika sought to oust their chief justice and eviscerate their judiciary, they rose as one to defend it.

In an unspoken understanding, Malawi’s judges have earned trust as the representatives of the only institution capable of holding the balance of power against the machinations of these resilient political families. It is an African example that should command attention beyond its own borders. DM/MC

Chidi Odinkalu is a former chair of Nigeria’s National Human Rights Commission and works with the Open Society Foundations.