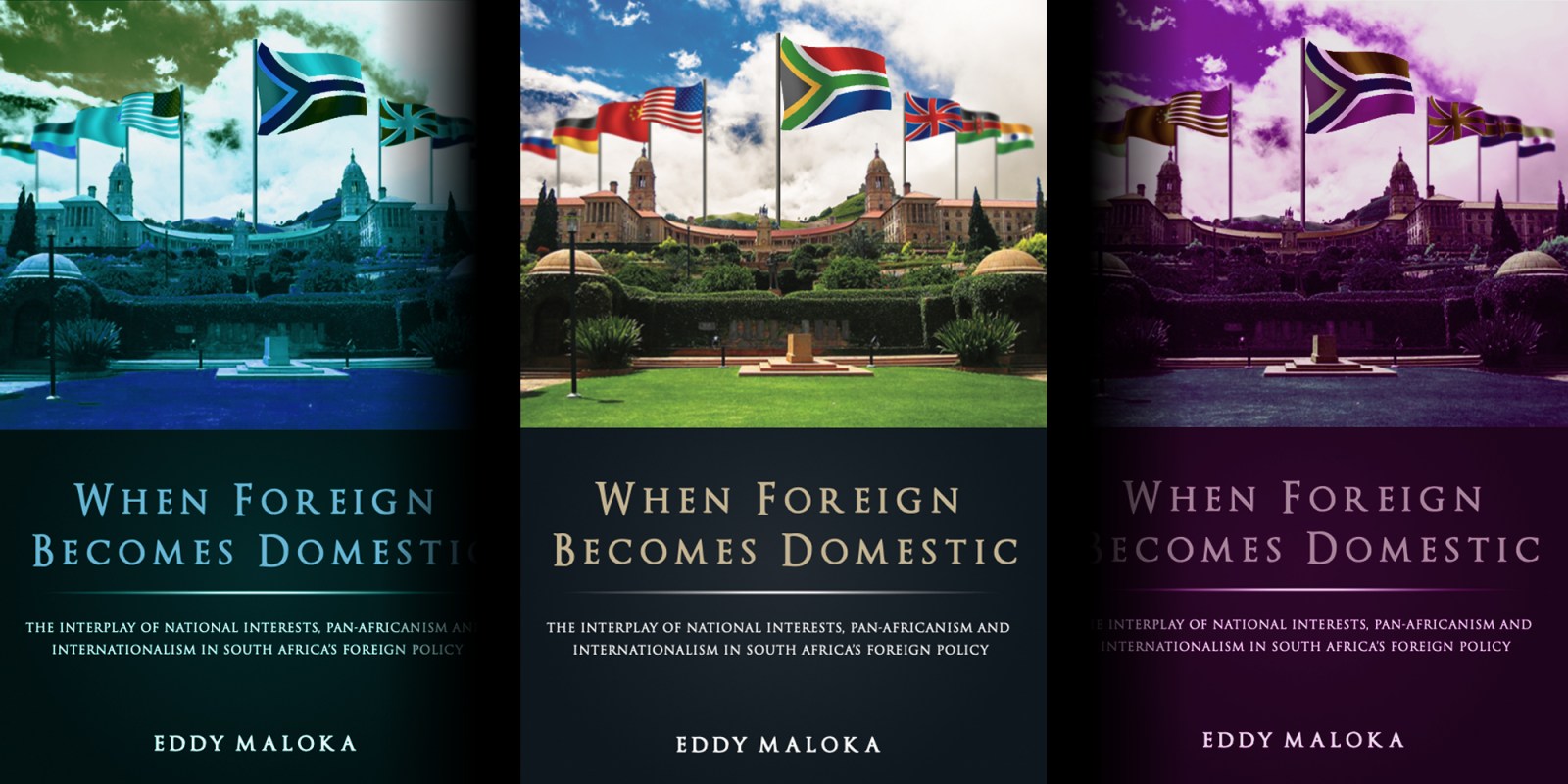 The value of this book lies in the insights it sheds about the actors, setting and processes involved in foreign policy. This is what the author describes as prising open the ‘black box behind foreign policymaking in South Africa’.

South African foreign policy in the post-apartheid era has been the subject of numerous books, articles in academic journals, policy papers, government reviews, public workshops and newspaper pieces. Very rarely, however, has the story of South Africa’s external engagements been recounted in such scholarly detail by an insider with direct experience of foreign policymaking.

This is what makes this book — When Foreign Becomes Domestic: The Interplay of National Interests, Pan-Africanism and Internationalism in South Africa’s Foreign Policy — by Professor Eddy Maloka distinctly unique and valuable. A trained historian and seasoned diplomat, Maloka served as special adviser to South Africa’s Minister of International Relations and Co-operation (Dirco) from 2009 to 2016.

The author departs from the premise that the bulk of the literature on South African foreign policy has characterised the country as a unitary actor in the global system, and has relied on historical periodisation centred on individual leaders. In this context, accounts of foreign policy have tended to depict the Nelson Mandela era as that of Human Rights, the Thabo Mbeki period as that of the Golden Age and the Jacob Zuma tenure as the Period of Decline. The author propounds a different approach, which contends that South African foreign policy rests on three interconnected pillars: national interests, Pan-Africanism and internationalism.

The value of this book lies in the insights it sheds about the actors, setting and processes involved in foreign policy. This is what the author describes as prising open the “black box behind foreign policymaking in South Africa”. Some of these insights bear pointing out. Post-apartheid foreign policy has evolved through three stages, discussed at length in the first chapter. The first stage entailed the restructuring of apartheid institutions and the creation of the now-defunct Department of Foreign Affairs. It was also during this time that a major reorientation of foreign policy took place in line with new strategic objectives.

Marking and coinciding with Mbeki’s ascent to the presidency, the second stage inaugurated the African Renaissance and African Agenda as hallmarks of external policy. Foreign policy benefited massively from the instrumental role played by the Mbeki administration in establishing the post-apartheid governance architecture for policy planning and monitoring and evaluation. The third stage saw the introduction of an outcomes-based approach to diplomacy and incorporation into external policy of the thinking set out in the NDP. An important consequence of this policy shift was the elevation of economic diplomacy as the leitmotif of foreign policy alongside the diminution of Afrocentrism in policy orientation.

Foreign policy decision-making in South Africa is the province of three actors: the Presidency, Dirco, and the African National Congress (ANC). The ANC in particular, via its headquarters Luthuli House, has a huge say in foreign policy decisions. Its deployment committee, for example, gets involved in making decisions on who is appointed to strategic foreign missions. Moreover, although the president decides on major global issues he does so in consultation with Luthuli House.

The Dirco bureaucracy is indispensable to the formulation and execution of foreign policy. Yet its role and contribution have been downplayed or underappreciated by successive political principals. Nowhere has this been more starkly demonstrated than in the privileging of underqualified and inexperienced political appointees over experienced and well-trained career diplomats, a practice that became the norm during the Zuma administration. This has bred pervasive disillusionment and low morale at Dirco.

Contrary to the popular narrative, the author argues, the decline of South African foreign policy did occur under the Zuma presidency, but only started around the time of the Mangaung elective conference of 2012 and accelerated after the 2014 national elections. The first term of the Zuma presidency, on the other hand, was infused with foreign policy activism on the African continent and globally.

Some of the achievements chalked up during this period were South Africa’s entry into the BRICS grouping, the elevation of the country to the United Nations Security Council for the second time since 1994, the successful lobbying for Dr Nkosazana Dlamini-Zuma to become the chairperson of the African Union Commission, as well as diplomatic and security interventions in Madagascar, Zimbabwe and the Ivory Coast. It was also during the Zuma presidency that economic diplomacy was catapulted to a key policy priority.

The author blames the subsequent foreign policy decline on political factionalism within the ANC, the administrative implosion of Dirco, as well as the effects of State Capture that blighted South Africa’s moral standing in the world.

The decline was reflected in, among others, “the diplomatic retreat of South Africa from engagements on the African continent”, the shift from an Afrocentric foreign policy towards economic diplomacy, and the country’s dwindling global activism. Exacerbating the decline was the impact of factional politics within the ANC which saw Dirco being dragged into the governing party’s fratricidal wars ahead of the Mangaung elective conference, with ruinous consequences. If this policy trajectory continues, the author warns, South Africa’s posture and strategic positioning in the world will weaken.

The subject of national interests and human rights looms large in the book. The author provides a detailed analysis of the national interests and human rights concepts, stressing the controversial nature of the nexus between human rights and foreign policy. Through the prism of three case studies — South Africa’s membership of the International Criminal Court (ICC), the controversy surrounding former Sudanese president Omar al-Bashir’s visit to South Africa in 2015, and the Dalai Lama visa debacle — he examines some of the contentious decisions in foreign policy that triggered fierce domestic debate.

Challenging the criticism that these cases demonstrate that South Africa has jettisoned human rights in its external policy, he argues that “the purported promotion of human rights in international relations is a geopolitical exercise used by powerful countries to justify their intervention in the internal affairs of weaker nations for regime change”.

To advance his thesis, he expounds a panoply of cogent arguments. But some of his arguments are less convincing. He, for instance, marshals a lucid critique of the ICC but treads on shaky ground when he states that “South Africa should mobilise continental support behind the African Court of Justice and Human Rights whose mandate includes international crimes, as an African alternative to the ICC”.

The department also needs to upgrade its woeful strategic foresight and scenario planning capabilities in accordance with global best practice. Significantly, the government must undertake a candid assessment of whether South Africa can fulfil its ambitious external policy goals in the face of the country’s deteriorating economic position.

This assertion is problematic in that it ignores the abysmal record of African leaders in dealing with human rights abuses on the continent and, specifically, it is silent on the genocidal excesses of the Al Bashir regime and what ought to be done about those. This raises important questions about the notion of Pan-African solidarity.

The author believes that South African foreign policy requires revitalisation and, although not dictating what policymakers ought to do, he identifies three issues that must be addressed. The first is the necessity to restore Africa and the AU to the centre of South African external policy. The downplaying of the Afrocentric thrust in policy, coupled with the obsession with quantitative targets set out in the NDP’s outcomes-based system, has undermined South Africa’s ability to project power and influence in Africa and beyond while also diminishing the capacity of policymakers to measure the qualitative performance of Dirco. He argues for the striking of a balance between political and economic considerations in external policy.

Second, there is a need for institutional reorganisation and renewal at Dirco. One of the policy mistakes, the author points out, has been the merger of Multilateral (dedicated to the United Nations) and Africa (focusing on the AU), which has resulted in the de-prioritisation of the AU and South Africa’s role in it.

Linked to this is the necessity to tackle widespread staff disaffection regarding the posting of personnel to South African embassies abroad. Dirco needs to institute a meritorious, transparent and predictable process of making foreign service appointments.

The department also needs to upgrade its woeful strategic foresight and scenario planning capabilities in accordance with global best practice. Significantly, the government must undertake a candid assessment of whether South Africa can fulfil its ambitious external policy goals in the face of the country’s deteriorating economic position. In this regard, it is important to ask whether the progressively shrinking budget allocations to Dirco, which started in the aftermath of the 2008/9 global financial crisis, have prompted a corresponding downscaling or reprioritisation of the country’s global ambitions.

Third, attention ought to be given to the destabilising role of ANC elective conferences in foreign policy. The destructive impact of these conferences on service delivery, staff morale and leadership succession in the public service deserves urgent and comprehensive examination. Their contribution to foreign policy degeneration cannot be underestimated.

This is a thoughtful, well-researched and timely book that brims with original insights. It should be made compulsory reading for scholars, policymakers, diplomats, corporate executives, civil society leaders and everyone who is interested in and cares about South Africa’s role in the world. DM

Soko is professor in International Business and Strategy at Wits Business School.