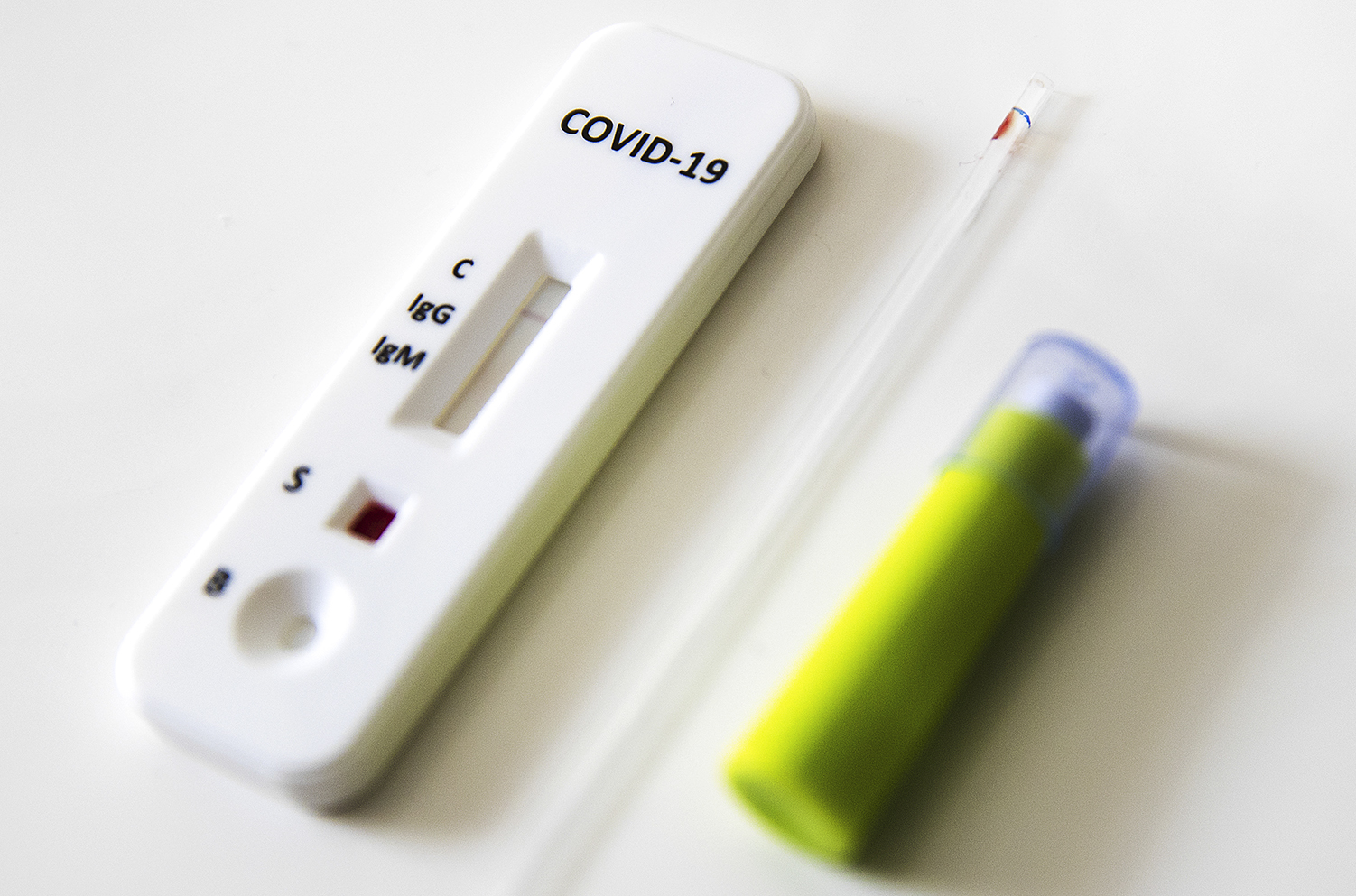 The first Covid-19 antibody rapid blood test kit approved for use in South Africa is strictly not for sale to the public or for use by general practitioners. (Photo: Adam Glanzman / Bloomberg via Getty Images)

The South African Health Products Regulatory Authority has approved its first Covid-19 antibody test — amid criticism that it is too slow and too cautious in approving applications for the registration of such tests.

The first Covid-19 antibody rapid blood test kit has been approved for use in South Africa, but it is strictly not for sale to the public or for use by general practitioners. The South African Health Products Regulatory Authority (SAHPRA) has given the nod for the supply of a single finger-prick (point of care) serology test. In addition, approval of the first laboratory-based Covid-19 antibody test in the country is imminent.

Dr Andrea Julsing-Keyter, SAHPRA’s senior manager for medical devices and radiation control, told Spotlight a licence to supply the rapid test kit, called Orient Gene Covid-19, had been given to Tip Top Trade (Pty) Ltd and that more applications for licenses to supply the kit had been made.

The Chinese product has been authorised for use in China and has been approved by authorities there for export. Another antibody rapid test manufactured by the same company, Zhejiang Orient Gene Biotech, was used effectively in a large Covid-19 serological survey in Spain.

The test will only become available once the ministerial advisory committee on Covid-19 releases its much anticipated national testing algorithm, setting out how serology test kits are to be used.

“The algorithm will tell us the appropriate place, how and when the tests can be used,” said Julsing-Keyter. “Because serology tests cannot be used to diagnose Covid-19, they will be helpful for monitoring and surveillance for serological surveys, epidemiological studies and the identification of hotspots,” she said.

Serology tests analyse blood to detect SARS-CoV-2 antibodies that are formed by the immune system in response to a past infection with the virus. They are useful in picking up evidence that a person had the virus even if they did not show symptoms. The tests are different to the swab or PCR test, used in South Africa, which can tell whether a person is currently infected.

Antibody serology tests, in general, are useful in establishing whether a person has acquired immunity to a virus and is also useful in testing whether or not a vaccine against an infectious disease is working. However, with SARS-CoV-2 virus, there is currently not enough evidence to say whether someone will be immune and protected from reinfection even if they have developed antibodies to the virus.

Julsing-Keyter said the specifications for the rapid test kit were adopted from the UK’s Medicines and Healthcare Products Regulatory Authority, with whom South Africa has a memorandum of understanding. “The UK specifications for sensitivity of the test is 95% and we dropped ours to 85% to accommodate mid-performing tests. The specificity of the test is 98%,” she said.

Approval for the Orient Gene Covid-19 antibody (POC) test kit comes amid sharp criticism levelled at SAHPRA by some researchers who have complained that the regulatory body has dragged its heels on approving laboratory-based antibody tests as important “weapons” in the arsenal to fight Covid-19. The accusations were expressed in an opinion piece in Daily Maverick with the authors saying SAHPRA “is overly cautious” in not allowing serology tests to be used by professional clinical laboratories, and that it is “frightened by the mistakes” some countries have made in buying home-testing point of care finger-prick tests as epidemic control tests. They have questioned whether SAHPRA regulators have the necessary expertise to evaluate data or whether they are “just misinformed”.

Julsing-Keyter responded saying SAHPRA had “numerous engagements” with the authors who “work for private laboratories”. She said they sent in data and applied for authorisation for laboratory tests that were illegally imported in terms of the 2017 amendment to the Medicines and Substances Related Act 101 (1965), which regulates medical devices and laboratory diagnostics. “You cannot manufacture, import, export or wholesale without a SAHPRA  licence,” she said. “Their laboratory-used kits are illegal.”

She said there has been “a flurry of illegal test kits on the market” adding that she gets six or seven reports daily informing her of more unauthorised kits. This is “totally unacceptable especially when you see the repercussion of tests being used by the wrong person”. She said SAHPRA was “on high alert” for devices that had been approved for export but had not been authorised for use in the country of origin.

Orient Gene Covid-19, the approved rapid test kit, performed far better than the laboratory-based tests, said Julsing-Keyter. The rapid test would also be cheaper, easier to use and could reach more people from a public health perspective. Laboratory tests require drawing blood from a patient and then processing the sample in a machine in a lab to get a result.

However, she said, the rapid test could not be used in situations where there was low prevalence of the virus. “It’s a mid-level performance test, so it is not accurate enough to be used by a GP, a pharmacy or an individual.”

In addition, she said, “We have also turned down many applications for laboratory-based tests because they just did not meet our standards for sensitivity and specificity. We have been accommodating in terms of the specifications but we must be steadfast. If this is the specification, you need to meet it. If not, you don’t get authorised. We are on the verge of approving laboratory tests but they will be limited in numbers as many do not meet the specifications.”

The regulator had been inundated with submissions which are screened and then forwarded for performance evaluations. “It’s been a dynamic process and we are also learning as we go.”

Julsing-Keyter said the specifications are published on the SAHPRA website where the target product profile for authorising an antibody test kit is outlined. “Our process is transparent. Applicants can see what standard is needed to authorise a test kit for use.”

Once an applicant has been reviewed, the regulator sends the kits to the National Health Laboratory Service (NHLS) where a battery of tests are run to evaluate the product. “If it passes the specifications, it’s authorised, if not it is rejected,” she said.

The process is in line with global best practice where all regulators go to their national reference laboratory, who determine the protocol. Scientists at the NHLS work closely with the World Health Organisation (WHO) and follow international best practice when developing the protocols that must be used for performance testing, she said.

“South Africa and the NHLS have a wealth of experience with these types of test kits for HIV and tuberculosis, so there is a wealth of knowledge in terms of protocol development,” Julsing-Keyter said.

‘We have to be cautious’

“We have to be cautious in these uncertain times. Our mandate is to ensure the safety of a diagnostic device, its efficacy and its quality. If we do not have accurate tests we are opening ourselves up to chaos.”

She said test results influence behaviour and policy and so it was essential to tread carefully. “We don’t want to flood the market with tests and then have to recall them as happened in the US.”

Julsing-Keyter said in South Africa test kits for Covid-19 are classified as Class D medical devices, meaning that they are high-risk products in terms of how invasive they are and their duration of use. Class A would be a wooden tongue stick and Class D would be a hip implant. Licenses for the manufacture or importing of high-risk devices will be given only if evidence is provided that the devices are registered for use in one of six jurisdictions, namely the US, Europe, Canada, Australia, Brazil and Japan or if the device has been pre-qualified by the WHO.

Julsing-Keyter said Covid-19 presented a challenge as no Class D test kits for Covid-19 were registered in the six jurisdictions. “Europe initially relied on self-declaration which we could not rely on and the US Food and Drug Administration approach is to accept applications and authorise upfront and as they review, they will recall devices.”

SAHPRA could not do this “kind of retrospective” action as it does not have the capacity “to control it (the process)”. “It’s easier for us to control it upfront and rather release a good product onto the market than allow the market to flourish and then try to pull off non-compliant tests after the fact.”

“We are custodians. It’s a matter of public health. If we don’t protect the public, there will be massive repercussions… so what if we are perceived to be cautious… we would rather [be] this than having masses of inaccurate results that inform poor behaviour that will put the population at higher risk. We don’t want to have recalls. We consider recalls very seriously,” she said. DM/MC