As statues fall globally, the University of the Free State chose a different path 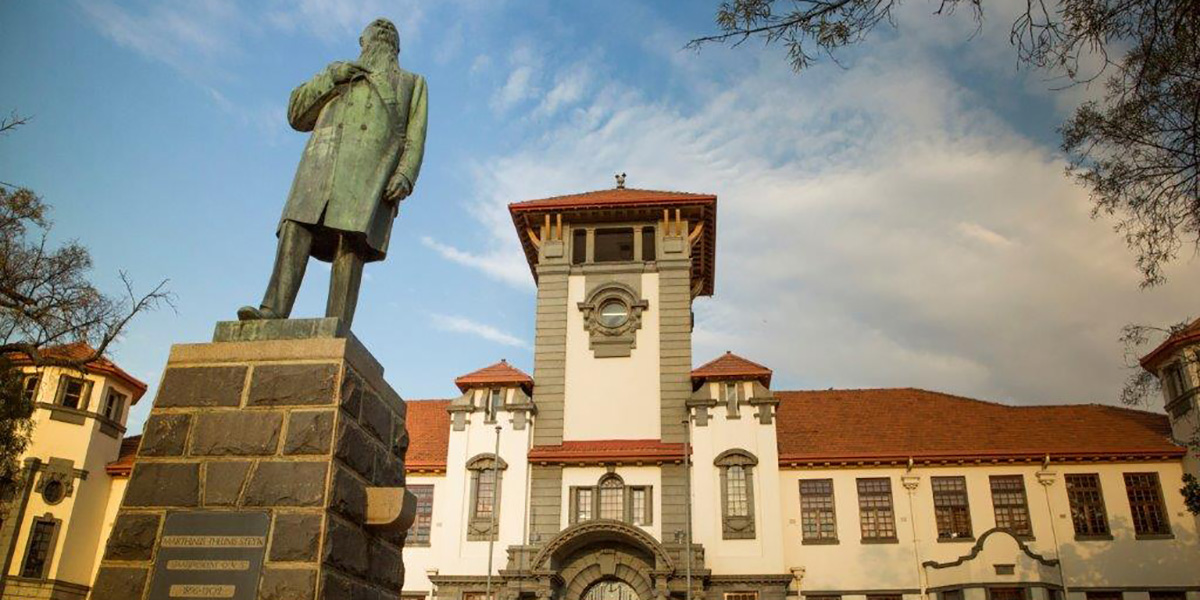 UFS has approached the call to remove the MT Steyn statue from the Bloemfontein Campus of the university in a transparent and consultative manner, say the writers. (Photo: UFS / Rian Horn)

The Anton van Wouw statue of Martinus Theunis ‘MT’ Steyn, president of the independent republic of the Orange Free State from 1896 to 1902, has dominated the main campus of the University of the Free State since it was unveiled on 28 September 1929. The UFS took a different approach to its removal.

The South African statue debate is back in the spotlight again, as statues deemed controversial or offensive are coming down in America and Europe during demonstrations against racism and police violence that have renewed attention on the legacy of injustices. This follows the death of George Floyd, an unarmed black man who died after a Minneapolis police officer knelt on his neck for more than eight minutes.

The world has witnessed the toppling of Confederate statues in San Francisco, Washington, DC, and Raleigh, North Carolina in the US, as well as a statue of slave trader Edward Colston in Bristol and the statue of slaveholder Robert Milligan, which was removed from outside the Museum of London Docklands in the UK. The statue of Paul Kruger on Church Square in Pretoria was again vandalised with red paint during a #BlackLivesMatter protest, as were the statues in France of Voltaire, a leading thinker and writer, and Hubert Lyautey, a French general and colonial administrator.

The challenge in the South African context

The traditional definition and meaning of spaces inhabited by people (including temporarily) still renders some of the public spaces unwelcoming and excluding by virtue of their names, presence of symbols, and inscriptions. These spatial markers have a historically significant link with certain social identities or representation, and there is an increasing call for the reconfiguration of public spaces. It is argued that the symbolic landscape also requires change if a city/metro is to incorporate all its citizens and their histories into the fabric of an “imagined” inclusive and just city.

The politics of symbolic representation has been at the heart of decolonisation and post-apartheid transformation. At stake in South Africa – with the historical legacy of segregation policies – is the competing and often conflicting notion of space, and the ideological notion of commemoration or memorialisation, coupled with the lack of shared collective memory and meaning of public representation.

This calls for a proactive approach towards the preservation and conservation of heritage resources material. In line with the National Development Plan 2030 (NDP 2030) – as a transforming country (with the baggage of both colonial and apartheid legacies) – the state is striving to cultivate an environment that is inclusive and socially just. The transformation of spatial milieu presupposes collective ownership and management of space, founded on the permanent and temporary participation of the “interested and affected parties” with their multiple, varied and even contradictory political interests.

In the review of the current symbolic landscape for inclusion, it is suggested that spatial identity transformation be negotiated; the process must develop from a nexus that understands the interrelationship between space and spatial inscription through the form of street names, symbols, public art and other forms of spatial markers.

Important to note is that symbolic power is inherent in these processes of change and includes, among other things, erasure and recognition and competing notions of spatial inscription or re-inscription. Notwithstanding the progress made to date, the following remains a challenge:

The politics of recognition

Five years since the #RhodesMustFall and #FeesMustFall movements, different forms of memorabilia still remain at the centre of discontent. The observation is that contemplative conversations on these diverse commemorative markers, sites and symbols established during the colonial, apartheid and democracy eras are becoming a threat to the country’s NDP 2030, and in particular the social cohesion project.

South Africa and the rest of the world continue to struggle to situate/re-appropriate historical text in the contemporary politics of recognition. The demand for recognition in the post-conflict society is given urgency/traction by the hypothetical links between recognition, identity and public representation.

Recent literature postulates that non-recognition or misrecognition in the metros or city spatial landscape can inflict harm, be a form of oppression, or imprison someone in a false, distorted, and reduced mode of being and belonging. Despite the Ministry of Arts and Culture’s investment in transforming the heritage landscape across South Africa – from the level of policy and legislation, the establishment of new commemorative markers, and heritage institutions – the question on what to do with symbols of South African histories and how to deal with them against the backdrop of preservation and conservation in the post-embedded conflict society, remains unclear.

Whereas the NDP 2030 is advancing a social cohesion vision, section 37 of the South African Heritage Act, No 25 of 1999, protects public monuments and memorials from any form of altering, damaging or relocation and prescribes a minimum requirement before any form of action is taken.

Although the act is advancing the protection of heritage resources, an interpretation of the act is that it makes provision for the re-imagination, creative, and responsible review of heritage in a post-embedded conflict society, thus broadening the heritage landscape through reconfiguration discourse of re-interpretation, re-appropriation, relocation and removal. It is a balancing act with embedded and enmeshed complexities.

Emancipatory claim-making in the quest for spatial parity

The statue debates continue to be characterised by a polarised disposition. At the one end of the continuum are individuals who hold a strong view and advocate for the “cleaning” of what is deemed painful reminders of past atrocities in public spaces, now accessible to all. On the other end of the continuum are individuals arguing for the juxtaposition model. The process of striving towards a space for equity (cf socio-spatial justice) and inclusion – needless to say – requires the asking of some difficult questions.

Towards the inclusion end, the argument is for spatial reimagination that will have the courage to disrupt homogeneity and advance heterogeneity in pursuit of a spatial landscape where differences intersect, influence each other, and hybridise in pursuit of dialogic engagements and transformative output.

True to the ideals of a contemporary university, which is an intellectual space that encourages new ideas, controversy, inquiry and argument, and which challenges orthodox views, UFS has approached the call to remove the MT Steyn statue from the Bloemfontein Campus of the university in a transparent and consultative manner, respecting the different views and perspectives. In fact, the UFS adopted an Integrated Transformation Plan (ITP) in late 2017, aiming at an institution “where its diverse people feel a sense of common purpose and where symbols and spaces, systems and daily practices all reflect commitment to inclusivity, openness and engagement” – the ITP, which embodies social justice, was used as the framework for engagement on the MT Steyn statue.

The South African Constitution, which celebrates the diversity of our nation, upholds the rights of all people to freedom of speech and specifically protects academic freedom. To shut down the right to speak or ask questions in the context of a public debate is unacceptable in a democratic society. Rude or violent behaviour rarely serves to change how people think about any particular issue – on the contrary, it polarises views and makes it harder to listen to one another.

In this engagement process on the statue, it was important for members of the UFS community to exercise tolerance to listen, to engage with strongly divergent views, and to do so in a manner that is respectful, so that it expands the space for debate. This indeed happened through seminars, public lectures, panel discussions, radio and television interviews, and public opinion pieces. Through these engagements, four options were put forward in relation to the MT Steyn statue.

Part of the engagement was a heritage impact assessment (HIA) with a public participation process. The public participation process (60 days) included the exhibition of a reflective triangular column erected in front of the statue, primarily to keep the statue topical, but it also edited the statue out of its power position if viewed from the east along the main axis from the city of Bloemfontein. Public notices and advertisements were placed in both local and national newspapers, while the family of President Steyn was kept informed of developments.

Although the call to remove the statue has challenged and re-energised a critical engagement around the purpose of a university in an unequal society – both as a site of complicity and as a potential agent for social change – the call should never be interpreted as an attack on President Steyn (the person), but rather what a 2m-tall statue represents for a changing student and staff demographic on the UFS campuses.

Honouring the legislative processes through the Free State Provincial Heritage Resources Authority, the UFS Council approved the relocation of the MT Steyn statue from the university campus to the War Museum in Bloemfontein – the “dignified” dismantling of the MT Steyn statue took place on 27 June 2020. With the statue at the War Museum, Steyn’s contribution as an anti-colonialist and anti-imperialist will be fully understood by all South Africans in the context of the South African War, as portrayed by the museum.

Reimaging an inclusive public space faces many obstacles and challenges in engaging with existing spatial markers, differences, diversity, and cultural heterogeneity in creative and productive ways. However, the path followed by the UFS to relocate the MT Steyn statue creates a unique opportunity for a discussion on how spatial re-interpretation can promote inclusivity and meaning of space in a sustainable manner that balances the intricacies of the past, the present, and the future.

All considered, it is a difficult process; but change cannot just be for the sake of change, there should be an emancipatory claim in the quest for a just society, advancing reasoning over rage. DM