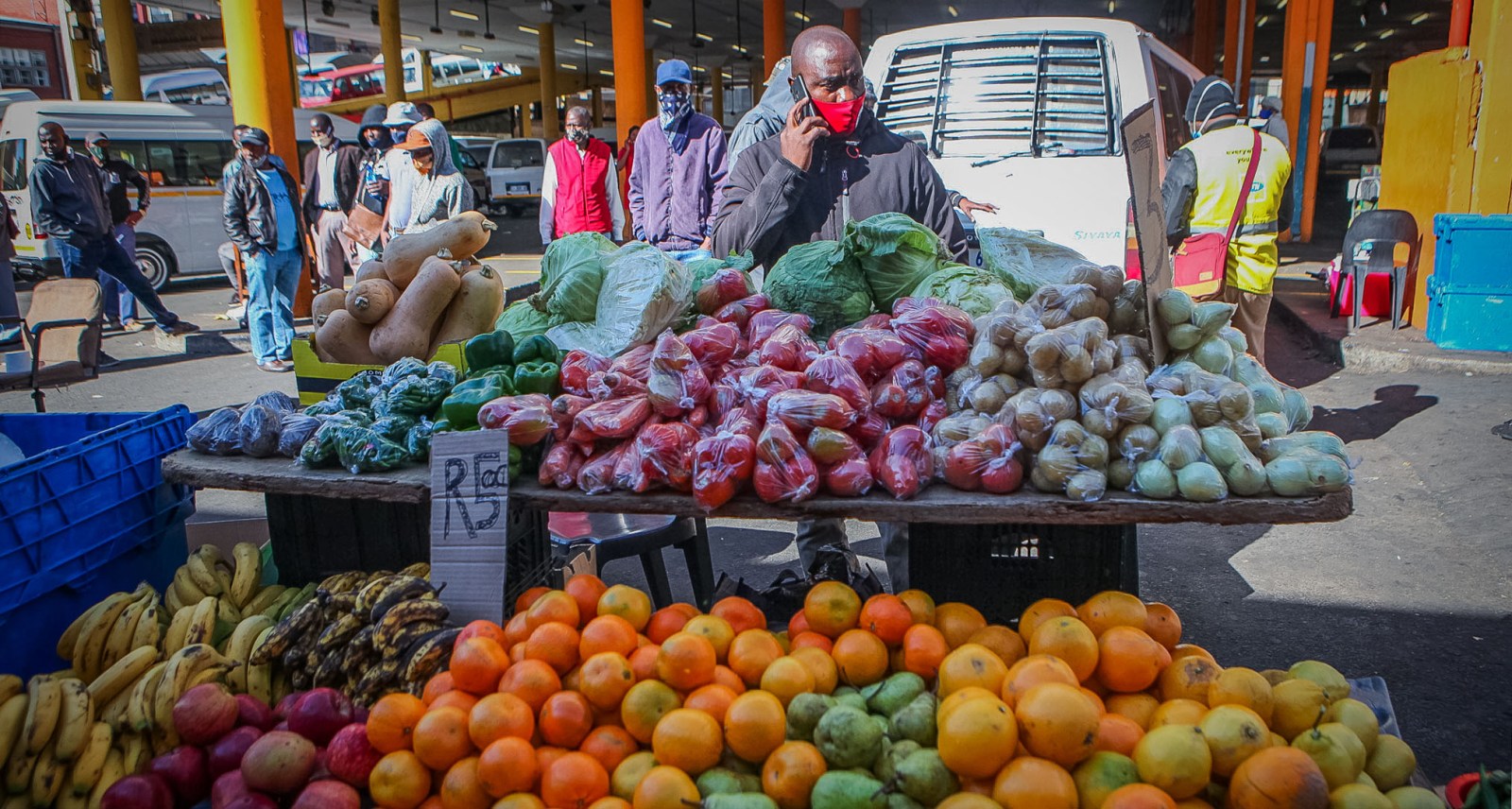 As many as 10,000 new trader opportunities could be established rapidly across the national suburban landscape at minimal financial or bureaucratic outlay, says the writer. (Photo: Sharon Seretlo / Gallo Images via Getty Images)

If municipal authorities used the legislative and management tools they already possess to open just one new street trading site in each middle-class suburb in their jurisdiction, this would collectively represent thousands of new trading opportunities and markets for street trader businesses.

Two important features of the township economy are the trading of food and drink, which make up 54% of all informal businesses and a significant amount of pavement-based “street trading” to access consumer markets. The township economy of food includes grocery retailing, the snack/sweet trade, fruit and vegetable hawking and the business of informal food service (largely braaied take-away foods). Many such businesses within the food economy operate as street traders.

Despite challenges like adhering to (commonly inappropriate) by-laws, crime, and sub-optimal trading conditions, these businesses are both resilient and sustainable. Across South Africa, street traders provide essential services and perform a critical function for local livelihoods.

However, since Covid-19, the flow of money through the business environment generally, and the township economy in particular, has become increasingly constrained. With consumer spending in freefall, job shedding across the economy will be inevitable, leading to more poverty.

As we learned from 200 telephonic household interviews conducted during the lockdown in the Cape Town township of Delft, as part of our ongoing collaborative United Kingdom Research and Innovation Global Challenges Research Fund (UKRI-GCRF) supported project*, household fears of Covid-19 and its legacy health and economic impacts are greater than ever.

Tragically, but not surprisingly, some 99% of households in our study reported being seriously negatively impacted by the pandemic. Similarly, the sentiments of township residents and business owners (shared with permission) make for distressing reading:

“I was driving the neighbour to work and he ain’t working so I’m not getting paid, so I have lost income… Stressed – yes as it’s gonna be even harder to get a job with a lot of businesses closing down.”

“There are days where there is barely something to eat for my family so it’s a pretty frustrating time for me right now… I lost my work before the lockdown started, my husband barely has work, and I’m trying to keep up with rent with what barely comes in…”

“I’m a street trader and I sell snacks… police do not allow me to do that, they say only fruits must be sold. I am starving.”

“It put a hole in everybody’s purse.”

In township households, families were already financially pressured through economic and spatial marginalisation, limited skill sets, having the kinds of jobs difficult to conduct from home, and operating businesses in very competitive sectors (such as the grocery trade), with marginal profits. With state coffers increasingly exhausted, and the majority of township microenterprises being informal and ineligible for government support, new opportunities for commerce are urgently required.

In response to the need for urgent intervention to support ailing microenterprises, and in addition to imperatives of BBBEE and other economic interventions, we now call for the national government to mandate its 278 local municipalities to urgently and collectively open a range of new trading sites to boost the market and economic prospects for the street trader economy. These sites should not be in marginalised townships, but rather in middle-class suburbs, transport nodes, high streets and CBDs.

A fundamental challenge for any business is that of attaining markets, meaning that opening up new trading sites with improved market prospects could go a long way to supporting informal micro-entrepreneurs and their livelihoods. The concept is simple: if municipal authorities used the legislative and management tools they already possess to open just one new street trading site in each middle-class suburb in their jurisdiction, this would collectively represent thousands of new trading opportunities and markets for street trader businesses. We would go as far as to say that with minimal localised impact in any one site, as many as 10,000 new trader opportunities could be established rapidly across the national suburban landscape at minimal financial or bureaucratic outlay.

Opening 20,000 increasingly commercially viable trading sites for their businesses in the suburbs and malls will not be the panacea for our economic woes, but it is an important step towards a more inclusive economy.

In addition to municipal efforts, we further call on each of South Africa’s estimated 2,000 shopping malls to create space to accommodate at least five appropriate informal traders within each mall. This would add an additional 10,000 increasingly viable business locations for traders. These new trading sites do not necessarily have to be free of charge (although should obviously be reasonably priced), nor do they have to evoke connotations of chaos and disarray.

If municipalities are not capable of dealing with this process, then local community groups, neighbourhood watches and residents can all play a role in selecting and supporting management of such sites. Surely adding one or two new traders in any one suburb is not an impossible task? A few extra street traders operating in carefully chosen viable trading sites in your suburb or mall represents a negligible impact on most day-to-day lives, diversifies the look and feel and “sense of place”, and bolsters consumer choice.

Furthermore, given a choice, buying fruit and vegetables, sweets and other groceries should not always have to occur in the supermarket. Integration of street trade into suburbs and malls further fosters new opportunities, relationships and networks in an economy of increased inclusiveness. But, as we are increasingly starting to see, the time to act is now. The extreme nature of the economic crisis we face means that implementing such changes to broaden economic opportunities must happen right away.

Suburban residents and mall shoppers should have the option to support such traders for their essentials inasmuch as they already frequently do in supermarkets and chain stores. While wealthier consumer markets also face considerable financial troubles, the pandemic downturn directly and most severely impacts the poorest, where safety nets simply do not exist.

Opening 20,000 increasingly commercially viable trading sites for their businesses in the suburbs and malls will not be the panacea for our economic woes, but it is an important step towards a more inclusive economy.

If every South African consumer purchased an apple a day from their local street trader, perhaps we would come through this pandemic with greater collective resilience. DM

*UKRI GCRF Water and Fire: Enhancing capacity and reducing risk through 15 ‘Best Bets’ for transformative adaptation with vulnerable residents on the Cape Flats, is a collaboration between the University of Stirling (PI, Dr Dalene Swanson), Sustainable Livelihoods Foundation (NPC), UCT and UWC.

Leif Petersen is a co-author with Andrew Charman and Thireshen Govender of the book Township Economy to be launched in August 2020, and which reveals the nature, scope and extent of what we have encountered and learned on this topic in the past decade.