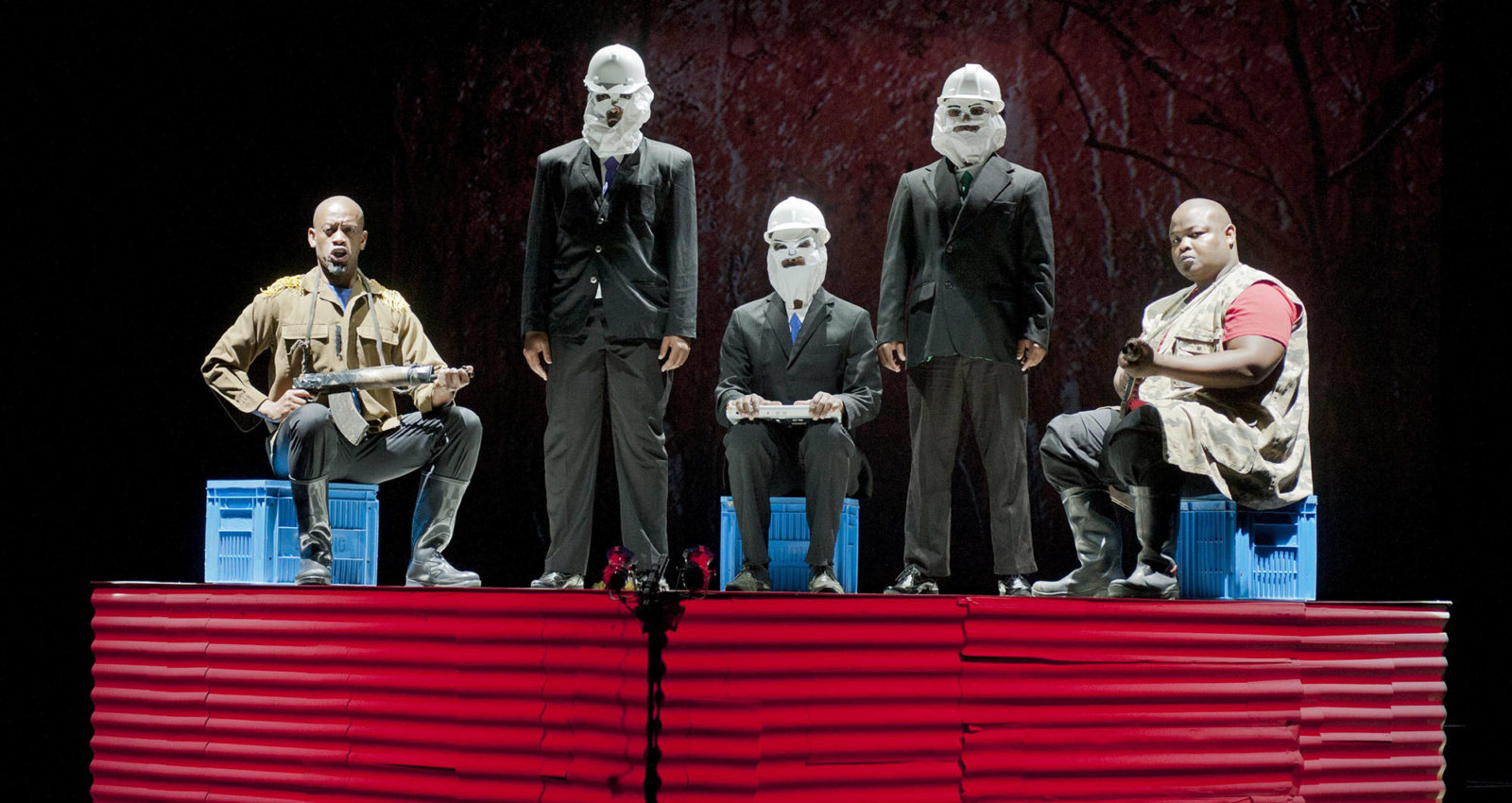 A rehearsal of the adaptation of 'Macbeth', by playwright and director Brett Bailey. (Photo: EPA / Robin Townsend)

Brett Bailey’s staggering version of Verdi’s Macbeth, set in the Democratic Republic of Congo, punches straight to the gut.

This article was first published in The Critter

The three witches. Ah, Shakespeare, you really screwed that one, you patriarchal old bard. Three Weird Sisters. Complete red herring, allowing men to get away with murder most foul for the next 400 years and counting. The malevolent forces that lever man’s greed and ambition are not supernatural, and they’re not women either. Mostly, they’re the lawyer, the accountant and the economist. Politicians are merely their puppets, from whence the violence flows: warlords, munitions, rare minerals.

Our modern gods: The corporations, the landlords, the banks.

The Congo, Democratic Republic of, is not just a setting, a geographical place where the politics is conveniently dark and violent for a Brett Bailey production.

Bloodshed and fire have raged up, down, and across the North Kivu province for 26 years. Roving gangs, warlords, hacking out their territory with pangas slashed into the bodies of its people; children, women, grandmothers. Farmers, merchants, families, thinkers, artists. People who made theatre.

Bailey’s dramatic conceit is a trunk full of costumes, props and sheet music for a colonial staging of Verdi’s Macbeth opera “some time between 1935 and 1945”. It is found in the town hall in Goma, having somehow survived pillaging. Battered, but intact, it is handed to a travelling troupe seeking refuge. And so we experience this “restaging”. A visual feast of Shakespeare’s finest victuals, stripped down to their bloody essence.

The three are men, whiteface, their cauldron the foreign exchange, which they stir with laptop, calculator, and balance sheet. They are our familiars, so much so we could almost name them. Look up and choose their names from a highrise building, a law firm will do, or an investment company specialising in high-risk mineral portfolios. Lit up and dancing while the chorus huddles in the cold, conducted at the sharp end of a panga.

With his centred, totemic aesthetic, Bailey punches straight to the gut, the red fist crowning Macbeth a signature symbol that borders on genius. But in this pared-down, dolled up piece, Macbeth is little more than a pawn. Lady Macbeth takes her rightful place on top of the stage upon a stage, the light equally cast on Shakespeare’s Three Weird Sisters. It is here Bailey turns the screw in this dark and threatening work, sweeping us along its path of violence with its epic, fated score.

The three are men, whiteface, their cauldron the foreign exchange, which they stir with laptop, calculator, and balance sheet. They are our familiars, so much so we could almost name them. Look up and choose their names from a highrise building, a law firm will do, or an investment company specialising in high-risk mineral portfolios. Lit up and dancing while the chorus huddles in the cold, conducted at the sharp end of a panga.

The surtitles are direct: “Fuck” becomes an extended note on an operatic score, concentrating all the frills that have been excised from the Italian dramatisation into an epic expression of impending doom.

“A fucking horrible beautiful day,” says Macbeth to Banquo after being uncovered by our three suits.

“I’d call you women but look at your beards,” Banquo to the witches, a line straight out of Shakespeare.

Macbeth to Banquo: “Your kids will rule one day.”

Banquo: “But first you’ll be commander.”

This while they’re singing Verdi’s opera. Weird shit indeed. And this is only the opening scenes. We could go, scene by scene, over the vision, the attention to detail. On the sumptuous simplicity of the design. It takes a life of its own. Lady Macbeth on a crate with a bowl of suds and “Bio Attack” washing powder when receiving the message of the Commander’s death from Macbeth on her mobile.

Later, in the lap of luxury, design camo laid upon design camo. It becomes its own language of opulence and excess, paid for in fear and paranoia.

But not for the witches. They are protected by their balance sheets, laws and court judgments.

Bailey makes no bones about this. These “witches” feature prominently. Possibly more prominently than any other staging of either Macbeth or the opera. Academic papers have been written on it. The light is shone on them. Even so, they remain in the dark, behind the white visages; the sages peering into the ethereal world of figures and columns to sway the balance in their favour, one way or the other. Lady Macbeth a tool, a lever with which to prise open the male ego to unleash its toxicity.

Bailey, for all his signature stylisation, comes into his own in this staggering work. The hexagon, to the hilt a corporate logo, breaking up into three birds that flit their messages across time and space makes it clear: behind the death, destruction and blood minerals of the eastern Democratic Republic of Congo are the machinations of multinational corporations. And we are all in league: their profits come from the devices that sit in our pockets. DM

This filmed version of Verdi’s Macbeth made its debut on the virtual National Arts Festival on Wednesday 30 June and was recorded at the Teatro Politeama during the Napoli Teatro Festival in June 2016. It remains available for viewing until 16 July. Tickets cost R35.