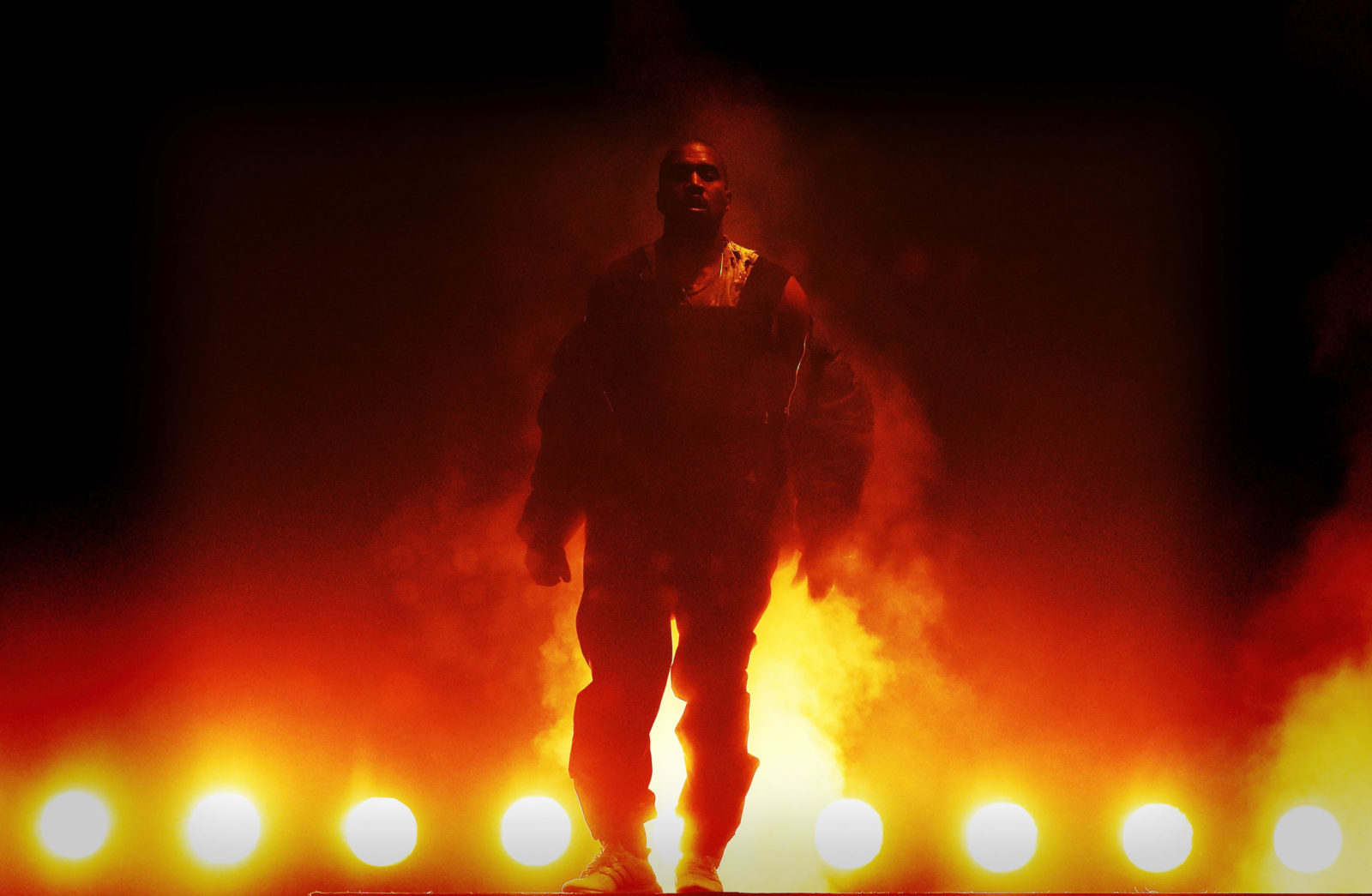 Admit. Celebs are the truly anointed and they really do hold all the answers. This week, we bow before the visionary Mr West.

Has any other year in recent memory ever been so 2020 as 2020? Every time it seems as though we’ve reached peak 2020, another shocker pops up. Thankfully, some of them are welcome surprises, such as the blessed news that came on the weekend of 4 July.

Faced with a world seemingly coloured by adversity, a plague, injustice, and Twitter/Facebook wars, many of us might understandably be tempted to give up on humanity, and to throw the whole lot out with the garbage. Fret not, because even in these uncertain times, heroes still breathe among us.

This past weekend, the holy circle of celebrity shone its golden light upon the peoples of the world in the form of a presidential bid announcement from rapper, visionary, fashion entrepreneur, and 2020 Forbes list billionaire, Mr Kanye West, aka Ye, aka Yeezy, aka Yeezus; father of North West, Saint West, Psalm West, Chicago West, husband to the inimitable Kim Kardashian-West, son-in-law of Kris Jenner the greatest momager the world has ever known, and brother-in-law of Khloe, Kourtney, Kendall and Bruce.

Lest I forget, also brother-in-law of Kylie Kristen Jenner, once 2019’s youngest Forbes billionaire and cover star, until May 2020 when they got technical about some fraudulent paperwork and wrote a whole article about how they were lied to and she was never a dollar billionaire in the first place.

My thoughts and prayers go out to Kylie and her industrious family. They’ve gone through so much; the injustice breaks my heart.

Anyway, back to the amazing Mr West.

Sensing that we might not have reached peak 2020, on this July 4th weekend Ye took to what has arguably been the most appropriate platform for all things presidential since 2016: Twitter. In a concise 138 characters, 165 if you count spaces, Ye announced, sans speech, that he would be running for the top job: “We must now realize the promise of America by trusting God, unifying our vision and building our future. I am running for president of the United States! #2020VISION”.

Cometh the hour, cometh the man.

You would think that as exhausting as 2020 has been for tweeting thumbs, the Twitterati might be too distracted by the deluge of news and miss this bit of history. Not so. Ye shot to the top of the Twitter trending topics, the people were obviously as energised as I was by the news. Call it the audacity of hope.

Singer Grimes’ boyfriend and father of their son X Æ A-12, Elon Musk, was among the first to endorse Mr West’s candidacy, responding just seven minutes after the historic announcement. “I will back you all the way”, tweeted the billionaire troll from Pretoria Boys High.

And speaking of billionaires who have each other’s backs, I suppose we should have sensed that it was presidential destiny – Yestiny – calling back in 2016, when Mr West started wearing red MAGA caps, tweeting out support for Donald Trump and staging photo ops at Trump Tower. Woke Twitter cancelled him, woke fans could only stream his music in secret and never tweet about it. Four years later he was a billionaire, his Yeezy sneaker collection still kept selling out, and he had released yet another record-breaking album.

That you’ve got to give to Mr West, he is a beast of a talent. Not that he needs your validation, for he is blessed with a knowledge of his gifts and the confidence to let everyone know just what an overflowing bowl of amazingness he is. Like that time when he told The New York Times: “I think what Kanye West is going to mean is something similar to what Steve Jobs means. I am undoubtedly, you know, Steve of Internet, downtown, fashion, culture. Period. By a long jump. I honestly feel that because Steve has passed, you know, it’s like when Biggie passed and Jay-Z was allowed to become Jay-Z. I’ve been connected to the most culturally important albums of the past four years, the most influential artists of the past ten years.”

Or when he enlightened us about his 2013 song I am God, during his R1 interview with Zane Lowe: “When someone comes along and says something like ‘I am a God,’ everybody says ‘Who does he think he is?’ I just told you who I thought I was. A God. I just told you. That’s who I think I am.” Bless.

As the heterosexual community likes to say when affirming shining examples of their particular sort of arrangement: “Behind Beside every great man there is a great woman.” Enter Mrs Kardashian-West. Has any woman in history ever been so vilified? So much hate, so much cyber-bullying, all because of one woman’s ambition and focus in the pursuit of her dreams? Yet, year after year she stands sort of tall in her truth and does the necessary work.

With 2020 trying to give us a decade’s worth of plot packed into six months like some real-life telenovela, many might have forgotten that our the US’s future First Lady (I’m calling it), took the fight for prison reform straight to the top in May 2018.

Armed with negotiation skills honed by years of negotiating endorsement deals for slimming tea and waist trainers, in her role as influencer and celebrity, Kim K took on the case of Alice Marie Johnson and negotiated her freedom with Kushner and Trump. Johnson was a 63-year-old great-grandma in 2017, who out of desperation when she lost her management job after 10 years got involved in a drug conspiracy back in the 90s. Besides being a first-time offender, a nonviolent one at that, she was sentenced to life in prison in 1996. In October 2017, the website mic.com posted a video about her case which went viral. So moved was Kardashian-West that she fought until she got a meeting with Trump and Kushner on May 31. A day later, completely unrelated, Trump announced the presidential pardon of the right-wing pundit and convicted felon Dinesh D’Souza. A week later Johnson’s sentence was commuted and she was a free woman.

Kardashian-West did all this while creating possibly the most influential TV series of a generation, one that basically defined a genre. And dealing with Instagram abuse. Only last week, trolls and social media feminists came for her just because she posted a video to her 178 million followers, of herself wearing a Mr Pearl corset that squeezed her waist into a circumference so tiny that it looks impossible to achieve for anyone over five years old. They went on about her promoting unrealistic body standards, and something about impressionable young followers.

Jealousy is a disease, I hope her detractors get well soon.

Actually, the whole Kardashian-Jenner clan has displayed such incomparable grace in their role as the First Family of television entertainment, I can only imagine the dignity, class and style they will bring to the White House. I’m sure you can too, reader. I still remember the very insightful observation Kim made on that very first episode of Keeping up With the Kardashians in 2007: “There’s a lot of baggage that comes with us, but it’s like Louis Vuitton baggage; you always want it.”

Well played Mr West, well played. Or should I call you… 46?

Admittedly, even with all of West and Trump’s combined efforts, not all tweets are worthy to be viewed as presidential. Such as those from users and “news” sites who pointed out that West missed the deadline for ballot access in Texas, New York, North Carolina, New Mexico, and Indiana. And that the deadline in Florida, Michigan, Oklahoma and South Carolina expires in about 10 days. The rest of the states in about 30 days.

These people lack vision. Bots probably. On Mr West’s behalf, may I remind them of another moment in history, June 16 2015, when another presidential hopeful came down that escalator and launched a campaign on a platform of racism and xenophobia. That won’t work, they said; news anchors laughed, pundits mocked him. Deluded by the Obama years, they thought, “Americans are better than that”, they thought racism was cured and xenophobia would never work to get a 21st century US president elected. Lolz.

There are sure to be testing times ahead for Mr West, and in the darkest moments, I hope he finds strength in the words of his very own poetry, like one of my favourite pieces, FML, the 11th track from his critically acclaimed 2016 album, The Life of Pablo.

“Told you four times, don’t test me ho
Now we finna lose all self-control
But you ain’t finna be raising your voice at me
Especially when we in the Giuseppe store
But Imma have the last laugh in the end
Cause I’m from a tribe called check-a-ho”

Dare I say, you sir are every bit as presidential as the incumbent. Godspeed. DM/ML