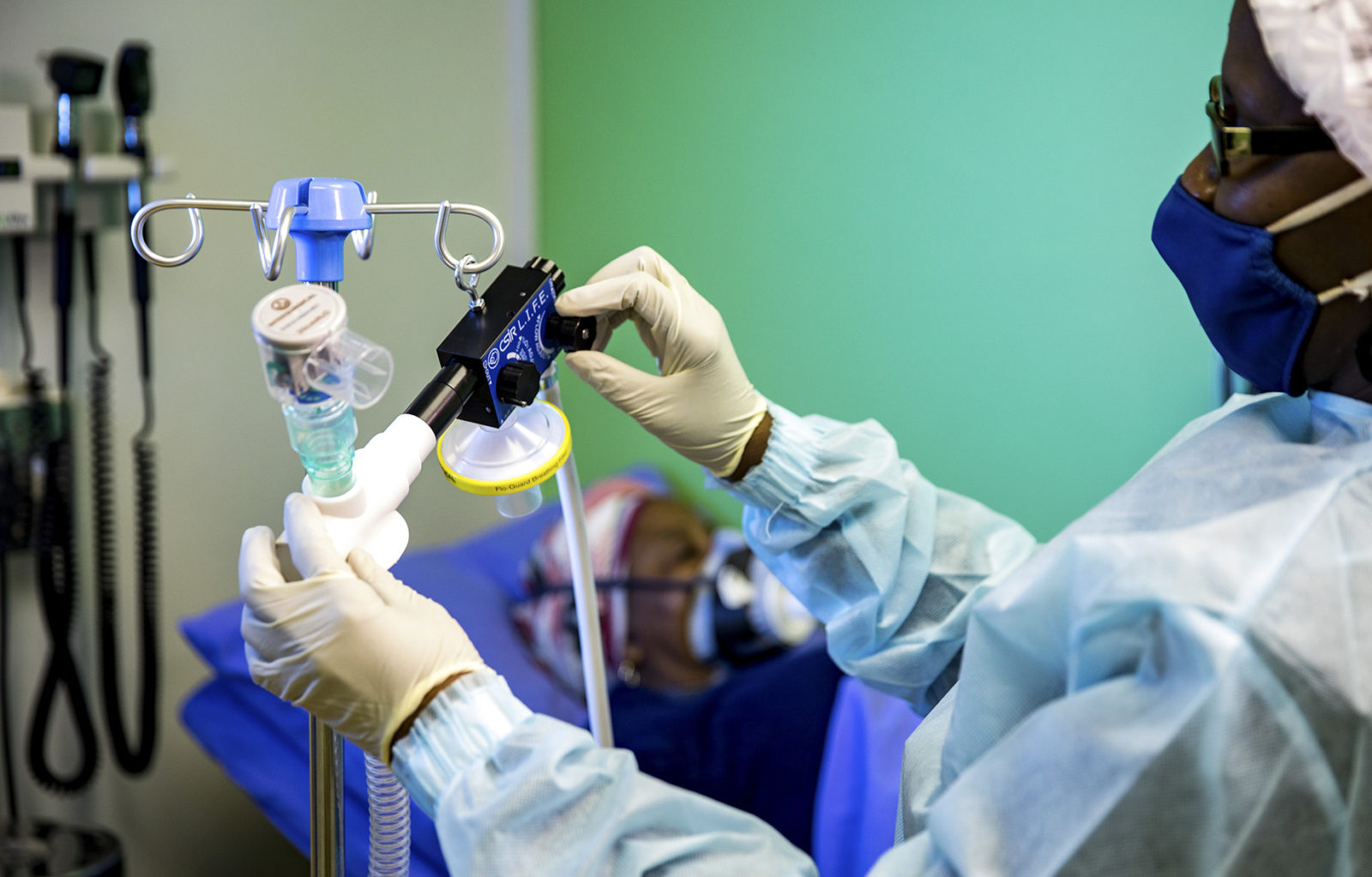 The LIFE ventilator, designed by the Council for Scientific and Industrial Research is demonstrated by a CSIR staff member at its campus in Pretoria East. (Photo: CSIR)

Production has begun on three local non-invasive respiratory ventilator designs. This is not just good news for hospitals and patients, but also for manufacturing in South Africa.

It’s happening about a month later than hoped, but the promise of 10,000 extra ventilators to provide breathing support to Covid-19 patients who end up in hospital is weeks away now.

Production has begun on three locally made models of non-invasive ventilators. In two weeks, the first 1,000 will have been made and after that 1,000 per week will be manufactured until the goal of 10,000 has been reached. If more funding is found, these numbers will double.

This is no small achievement since South Africa does not have a rich history of producing medical equipment.

In April this year, when South Africa had around 1,000 confirmed Covid-19 cases – almost 200,o00 in early July – the Department of Trade, Industry and Competition mandated the South African Radio Astronomy Observatory (SARAO) to manage the national effort required for the local design, development and manufacture of respiratory ventilators.

“I have been blown away by the capacity we have in South Africa,” says Justin Jonas, a professor of physics and electronics at Rhodes University. “If I hadn’t been a part of this project, I think I might have been panicking as we got into the peak of this thing.”

Jonas is neither a doctor nor a medical technician. He is the chief technologist at the SARAO, which was mandated to manage the National Ventilator Programme (VNP) in March 2020. He was part of the team that organised the construction, testing, commissioning and operation of the MeerKAT radio telescope and the development of the Karoo radio observatory site.

There is a public narrative that if you go into hospital with Covid-19, you will end up with a pipe down your throat and a machine pumping air into your lungs through it, but that your chances of survival would be minimal anyway. This idea does not reflect reality, Jonas says.

“Initially, with the MeerKAT project, there were a lot of scientists with great ideas about what they wanted, but if we’d tried to follow all those ideas, we’d never have been able to get the project off the ground.

“So we selected a small number of very knowledgeable people who helped us come up with the requirements for MeerKAT. Same thing happened with the NVP.

“In the beginning of this pandemic there was a lot of noise, from all over the world, about was meant by ‘ventilator’. A large part of our role was to take the noise out of the system as quickly as possible because of the urgency. We had to find people who were knowledgeable and were able to share their knowledge so we could come up with a list of specifications, and then go back to them to validate that the specifications we’d come up with would meet their needs,” said Jonas.

There is a public narrative that if you go into hospital with Covid-19, you will end up with a pipe down your throat and a machine pumping air into your lungs through it, but that your chances of survival would be minimal anyway. This idea does not reflect reality, Jonas says.

“I am not a doctor, I have to emphasise that, but as we now know, there is an ongoing number of asymptomatic cases. Then you have symptomatic cases, around 80% of which can stay home, and those people will get better. Twenty percent will have to go to hospital for a while. Three quarters of people going to hospital will merely require a little bit of oxygen. That means, they lie on a bed, have a nasal cannula feeding them oxygen, and in a day or two they will be better. Only a quarter of people who get sick enough to go to hospital, so five percent, will require anything more serious than that.

“Until now, people have assumed that if you go into hospital, you go on to an invasive ventilator. But that is not the case. The vast majority of people who will need more respiratory support than just a low-flow nasal cannula require non-invasive ventilation.”

Non-invasive ventilation usually involves a well-sealed mask, or sometimes a hood, over the patient’s head. It provides a mix of pure oxygen and air and helps to get that mixture into the patient’s lungs by delivering it at higher than ambient pressure. It doesn’t require a complicated intubation system. Exhaled air is filtered for viruses to prevent further spread.

When the NVP began in March, it was announced that there were a total of 3,216 ventilators in South Africa. Of those, 2,105 were in private hospitals. This was estimated to be around half of what would be required at the peak of the pandemic.

The three designs about to go into production can do either of the therapies. The first units coming out of production are destined for public hospitals, but more models are being made, tested and submitted for licencing according to the SARAO specifications. Devices that don’t meet SARAO’s specifications will not be accredited.

“Non-invasive ventilators are not something hospitals have a large inventory of,” Jonas explains. “Twenty years ago, it might have been different, but what’s happened in the interim is that basically you buy an invasive ventilator, a fancy machine that can do everything, including non-invasive ventilation. In normal circumstances it would be fine to have just a few of those because the caseloads would be low.

Just getting more invasive ventilators, even for invasive therapy, has its limitations because these devices need the associated infrastructure and specialist staff. Both are in short supply.

For the NVP to work, non-invasive respiratory ventilator models were designed, prototypes were made, adjusted and refined, licencing sought and granted, and Solidarity Fund support allocated. SARAO’s job was co-ordination, guidance, quality assurance and due diligence in a process “with lots of moving parts”.

All three of the ventilators now being manufactured are CPAP/HFNO blenders.

CPAP is the acronym for Continuous Positive Airway Pressure, which describes the therapeutic action that the technique provides to alleviate respiratory distress. Patients are not sedated and are usually conscious and cooperative during this therapy, and are capable of breathing on their own. The patient’s blood oxygen levels are usually monitored independently using a pulse oximeter.

HFNO is the acronym for high-flow nasal oxygen therapy.

The three designs about to go into production can do either of the therapies. The first units coming out of production are destined for public hospitals, but more models are being made, tested and submitted for licencing according to the SARAO specifications. Devices that don’t meet SARAO’s specifications will not be accredited.

SARAO engineers made models of the ventilators themselves in order to see what would be required in the production, even though SARAO itself will not be producing any machines.

“We wanted to get a sense of what we were in for. We wanted to see what the industry would have to deal with and get some idea of what the challenges might be… supply chain and material problems, tolerances and so on.”

Devices funded by the Solidarity Fund will go to public hospitals, but private hospitals are already sourcing devices from companies that were involved with the NVP. Some of these designs are awaiting registration with the South African Health Products Regulatory Authority.

And what were the results? Does South Africa’s manufacturing industry have what it takes to make these specialised machines?

“I was blown away by the capacity we have in South Africa. There are a whole lot of small companies that you don’t even know existed, none of them producing medical equipment, but all of which are entirely capable of making what is needed. I’ve been to all of the manufacturers and I was happily surprised by two things: their competence and their willingness to take shared risks in this enterprise. There’s a huge amount of goodwill and excellent capability out there.”

Jonas says that producing the necessary 10,000 ventilators for the health crisis has been “stream one” of the NVP.

“Stream two is a longer-term process looking into establishing an invasive ventilator capability in South Africa and maybe a broader medical design and manufacturing capability locally. That’s not a current priority, because stream one is about saving lives. The Department of Trade, Industry and Competition feels strongly about developing a sustainable industry in South Africa.”

One of the non-invasive ventilators now in production was designed by the Council for Scientific and Industrial Research (CSIR) and is called LIFE (which stands for Lung Inspiratory Flow Enabler). Another company has been subcontracted to make a CPAP blender according to an open-source Mercedes design.

The third non-invasive ventilator is called SAVE-P CPAP (SAVE stands for South African Ventilator Emergency Project), which is being produced by a consortium of car component manufacturers, including MCR Manufacturing in Rosslyn in Pretoria, who is responsible for assembly and testing of the device.

The production of the ventilators is not an end in itself. The ventilators need to be distributed to where they are most needed and can be best used. Staff will need to be trained to use the equipment, and beds with wall oxygen supply are required.

Devices funded by the Solidarity Fund will go to public hospitals, but private hospitals are already sourcing devices from companies that were involved with the NVP. Some of these designs are awaiting registration with the South African Health Products Regulatory Authority.

SARAO will continue facilitating, guiding and matchmaking for a while yet.

“We’re a very small sub-component of a complex system and co-ordinating all the bodies has been tricky under so much pressure,” says Jonas. “There have been a lot of parallel processes, and things are on track now.” DM/MC