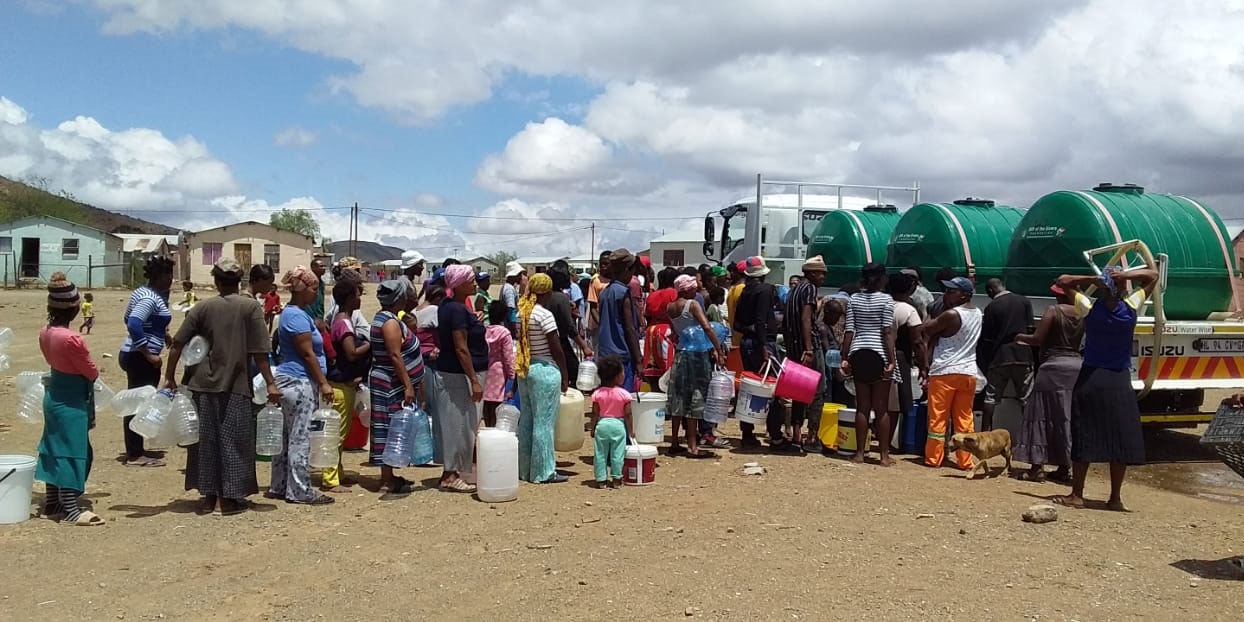 Only R5m of a R30m grant for drought relief provided to the Dr Beyers Naudé Local Municipality, based in Graaff-Reinet, was spent. The rest of it cannot be traced. This was one of the findings made by the auditor-general in a report on the municipality’s finances for the 2018/2019 financial year.

As Graaff-Reinet was hit by its worst drought to date and the Nqweba Dam dried up, residents had to deal with extreme water-shedding. The town ran dry and many residents had to stand in line for drinking water provided by organisations such as Gift of the Givers.

In 2018 the Beyers Naudé Municipality, based in Graaff-Reinet, was given R30-million to deal with the drought disaster. The bulk of this grant – R25-million – however, went missing and auditors were unable to account for where it went. This is one of the findings by the auditor-general in his consolidated general report on local government outcomes published last week.

Derek Light, the chairperson of the Graaff-Reinet Development Forum, an umbrella body comprising civil society organisations and local government in Graaff-Reinet, said he hoped it was “just an accounting problem”.

“We work on an apolitical basis and we were able to assist the municipality to achieve their goals. If this happened it will be the end of our co-operation,” he said.

“It would really be very sad if it is true.

“I have been working with the joint operations committee to address the drought and a lot of private money has gone into projects. The municipality received R7-million and R6-million after the initial R30-million.

“In fact, our bigger concern was that they were spending too much money. We were constantly challenging them on the high prices they were paying.”

He said the initial grant was given with a very tight deadline and the municipality had to apply for a rollover.

“You must understand that for… [the findings by the auditor-general] to be true it would mean that all of the senior officials of the municipality have been lying to us over an extended period of time. If that has happened it really would be astonishing,” he said.

“We have been working so close. We put our minds together to find long-term solutions for this town. It would really be mind-boggling. Our own hydrologist has inspected their work.”

He said the initial funding was given to install water meters, rehabilitate boreholes and for the upgrading of equipment in Graaff-Reinet and the surrounding towns.

“Every now and again we would hear that contractors have stopped working and they were waiting for payment but they would always be paid again,” he said.

“I am really hoping that this was just poor accounting. The municipality did inherit a lot of debt and were financially constrained.”

He said the development forum had attracted R100-million in investments.

He said when the Nqweba dam ran dry the forum was pushing the municipality to fix pumps that had been vandalised.

“The pumps are still not repaired. It would mean that when the dam is full we will not be able to use the water. We pushed them to ask for permission to use some of the grant money to fix the pumps. They said no – the grant money was intended for specific purposes.”

In the auditor-general’s report the situation in the municipality, based in Graaff-Reinet but also responsible for the local government in surrounding towns, was described as follows:

“The… region experienced a drought and received a drought relief grant of R30-million to assist. An amount of R5-million was spent and R25-million was recorded as an unspent conditional grant in the financial statements. This amount was not returned as the municipality did not have cash reserves of R25-million in their bank account. This means that the unspent grant money was spent on expenses not relating to the drought relief.

The report stated that management at the municipality “did not implement adequate financial disciplines”.

“Supervisory reviews and monthly reconciliations were not taking place and document management was lacking, resulting in evidence not being available to support the figures in the financial statements.

“Additionally, the internal audit unit was not fully capacitated, with the result that they could not complete all their planned audits for the year, which included the review of the financial statements and the relevant supporting schedules. As a result, numerous errors were not identified and corrected.

“The council, through their Municipal Public Accounts Committee, investigated transactions making up the irregular expenditure balance to determine if value was received and if a financial loss was incurred that should be recovered.

The report further found that the municipality had been under increasing financial pressure and had been running at a loss since inception.

“For the year under review, expenditure exceeded revenue by R101-million, indicating that the municipality may struggle to continue operations and deliver services in the future. The equitable share grant funding for the year amounted to R83-million. This was, however, not enough to cover the salary bill of R169-million. This means that the cash collected from consumers for rates and service charges (R139-million) had to be used to first cover this shortfall before paying for the costs associated with delivering these services (for example paying Eskom, which at R89-million accounted for the majority of the municipality’s payables).

Mamnkeli Ngam, the spokesperson for the Eastern Cape MEC of Co-operative Governance and Traditional Affairs, Xolile Nqatha, said the MEC was disappointed with the results of the audit.

“They represent a serious regression.”

He said a meeting was planned with all mayors to discuss a way forward.

“We want to have a thorough discussion and this will include conducting investigations in areas where there is a suspicion of wrongdoing,” he added.

The Democratic Alliance’s spokesperson on the issue, Vicky Knoetze, said the municipality was descending further into financial chaos. She claimed councillors from her party had been threatened that if they did not support the budget, funds would be diverted away from their wards. She said Nqatha had to intervene last week after the municipal council “bungled” the passing of the new budget.

She further claimed that the budget was passed the next day after councillors were given only two hours’ notice instead of 48 hours.

“I will be writing to MEC Nqatha to once again intervene as the process is flawed and thus the budget does not meet the legal requirements to be considered valid,” she said.

A spokesperson for the municipality, Edwardine Abader, did not respond to a request for comment. DM/MC